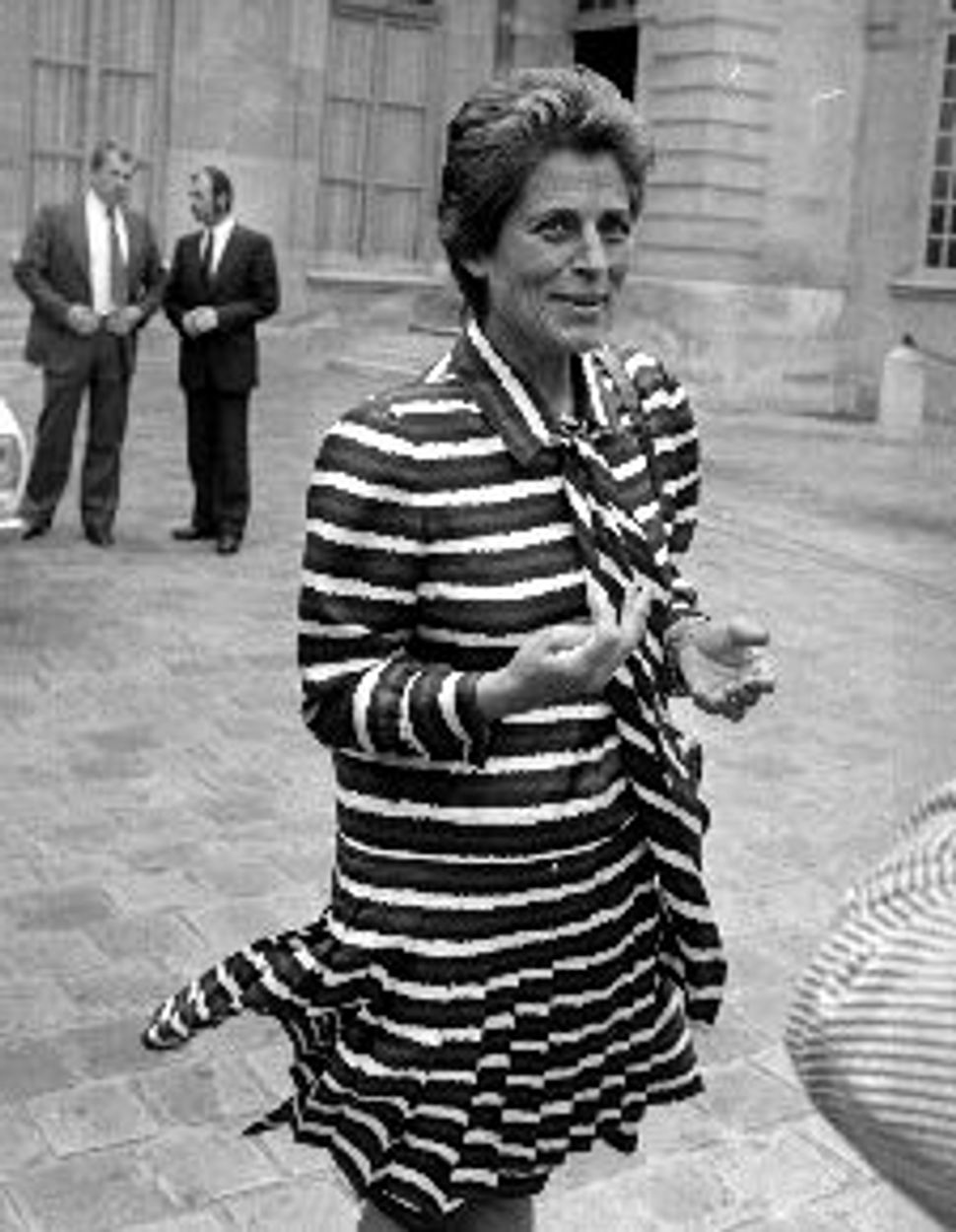 To many, Françoise Giroud, born Lea France Gourdji in September 1916 to Turkish-Jewish parents, was an example of a woman who handled power with uncommon grace. Giroud, who died in January 2003 at age 86, served as France’s minister of culture. In 1953, she co-founded the influential political weekly L’Express to advance the agenda of French-Jewish politician Pierre Mendès France, who soon after was elected prime minister. Journalist for a number of leading weeklies and author of more than two dozen books, from novels to biographies (of Alma Mahler and of Karl Marx’s wife, Jenny, among other liberated women), and advocate of women’s rights, Giroud epitomized a successful career woman at a time when such were still rare in France.

Yet, as “Françoise,” an admiring, unsparing new biography that appeared from Les editions Grasset on the anniversary of her death, January 19, underlines, Giroud’s success came at the cost of genuine inner torment. The book’s author, Laure Adler, herself a noted journalist, quotes eminent French-Jewish statesman Robert Badinter, who states that Giroud was a “warrior.” And indeed, she had plenty to fight against during her long and storied career.

A determined leftist from her earliest years, she told a French TV interviewer in 1972 that she fervently supported the Popular Front led by Jewish politician Léon Blum after experiencing the “cruelty of the bourgeoisie” in France. Her first major challenges came in Occupied France, where Françoise and her older sister, Djenane, known as Douce, were active in the Résistance. In 1943, Giroud was arrested by the Gestapo and sent to Fresnes Prison, near Paris, but she was freed in July 1944, due to a lack of evidence against her and to the fact that the Germans had no idea she was Jewish.

Douce was less fortunate — also arrested, but sent to Ravensbrück concentration camp, north of Berlin, where she was so ill-treated that she died soon after being released from the camp at the war’s end. In her 1997 memoir, “Arthur, ou le Bonheur de Vivre,” (“Arthur, or the Happiness of Being Alive”), Giroud wrote of her late sister: “The day she died, my childhood vanished…. All my memories would be bereft. We would joke to one another, ‘When we’re old, we’ll be outrageous old ladies, guzzling whiskey and no longer caring about men. It will be heaven!’”

If not heavenly, Giroud’s postwar years were exciting and bold, careerwise. Even an early marriage soon after the war, to film producer Anatole Eliacheff — which immediately produced two children — did not slow down Giroud professionally. In 1945, French-Jewish press magnate Pierre Lazareff hired her to co-found Elle magazine with his wife, Hélène Gordon. When she co-founded L’Express, it was with journalist and politician Jean-Jacques Servan-Schreiber (known as JJSS), of German-Jewish origin.

Although JJSS was married, in 1951 he and Giroud began a long-term love affair that ended badly when Giroud, already over 40, suffered an ectopic pregnancy. JJSS’s wife could not give birth, so he divorced her and dumped Giroud to marry Sabine de Fouquières, then a secretary at L’Express who would become the mother of his four sons. These events shook Giroud to the core, and the still-fresh trauma of wartime persecutions must have boiled over in her psyche, motivating Giroud to write to JJSS and his pregnant wife anonymous letters that contained surprising, virulent and clearly loony anti-Semitic remarks.

Among these is one that, quoted by Adler, scorns JJSS as “Jew SS” (Juif SS) and for wanting “children, as if there weren’t enough Jews in the world.” Giroud was fired from L’Express after a handwriting expert identified the letters as having been written by her. In the aftermath, she twice attempted suicide. Her daughter Caroline Eliacheff, who grew up to be a distinguished child psychiatrist, described Giroud’s anonymous letters in a January 8 interview with Le Journal du Dimanche, as “perhaps the desperate revenge of a profoundly hurt woman.” Indeed, Giroud’s upset was such that Jacques Lacan gave her psychiatric treatment, which she later claimed saved her life.

A believer in liberty for all and not just for herself, Giroud allowed Eliacheff to leave home at age 14 to live with French actor/director Robert Hossein (born Hosseinhof, of Iranian-Jewish origin), who was then 35. Caroline, who would marry Hossein at age 15, produced a son, Nicolas Eliacheff, who later changed his first name to Aaron. He became a rabbi and talmudic scholar based in Strasbourg, where he is director of L’Institut Talmud et Transmission. Through years of discussions with his grandmother, Eliacheff would bring Giroud to a fuller awareness of her own Judaism, transcending the traumatic memories of the German Occupation and of lost love. Eliacheff has channeled some of this insight into co-authoring a new book, also out January 19 from Presses Universitaires de France: “L’idolâtrie, ou la Question de la Part” (“Idolatry or the Question of Perspective”), discussing idol worship, both ancient and modern, based on readings of the Talmud.

Although less studious, Giroud’s own literary expression of her belated understanding of her roots was a novel, “Les Taches du Leopard” (“The Leopard’s Spots”), which appeared from Les Éditions Fayard in 2003, just days after her death. “The Leopard’s Spots” is about a 20-year-old art dealer, Denis Sérignac, who, upon learning that he was adopted from a Jewish mother, enthusiastically assumes his Judaism, only to be stabbed to death by an anti-Semitic lunatic. Giroud’s sympathetic Jewish hero, albeit one who turns out to be a victim, invites the reader — if not the author — to identify with him. Despite her many public triumphs, Giroud had cause to see herself as a victim in a number of circumstances.

Not the least of these was a controversy about her wartime exploits that unfolded in the 1970s. Adler and a preceding biographer, journalist Christine Ockrent, agree that a letter received by Giroud’s mother soon after the war awarded Resistance medals to both Giroud and her deceased sister, but Giroud never bothered to collect this honor. When she referred to it in public three decades later, political enemies accused her of lying to advance herself. Although Giroud had asked Ockrent (wife of politician and Doctors Without Borders founder Bernard Kouchner) to write her 2003 biography, “Françoise Giroud, A French Ambition,” (“Françoise Giroud, une Ambition Française”)), the resulting book, appearing immediately after Giroud’s death, was seen by a few loyalists as harshly critical, despite Ockrent’s obvious admiration for her subject.

Giroud was one of the most media-savvy Frenchwomen who ever lived, whose seductive voice; slim, chic looks and eloquent intelligence made every TV appearance a personal victory. The one time I (briefly) encountered Giroud was on a fashionable Parisian street when, older than 70 but still the epitome of bulldozer energy, she dashed out of an art gallery where private-view festivities were under way, and almost barreled into me.

Interviewed in 1977 on the subject of her disputed French Resistance medal, a uniquely somber Giroud told French TV viewers “why I am not smiling today,” and reaffirmed her right to the honor. In a 1990 memoir, “Private Lessons” (“Leçons Particulières”) from Les Editions Fayard, Giroud quoted a Zulu warrior’s proverb about confronting death: “If you advance, you die; if you retreat, you die as well. So why retreat?” Badinter was right; Giroud was a warrior who never retreated.

Watch Giroud in 1994 reminiscing about her young years.