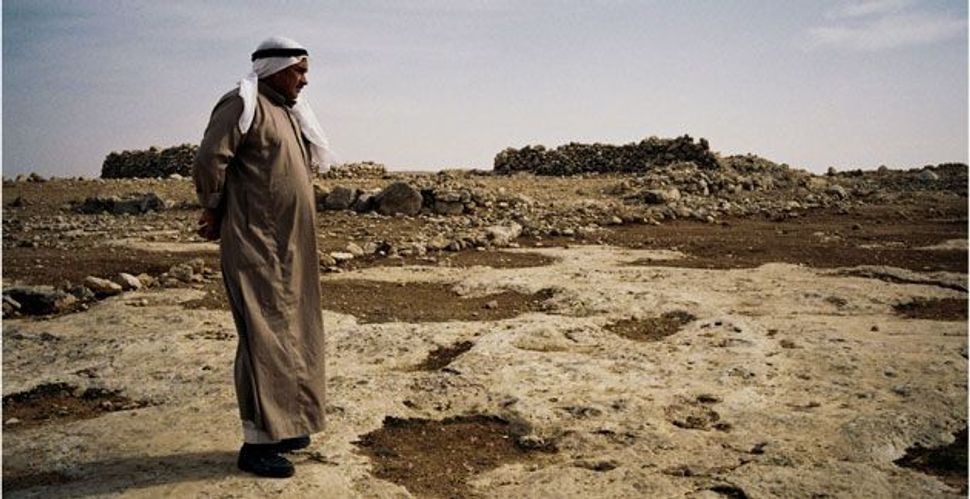 Susya: In Dani Rosenberg and Yoav Gross?s new documentary a Palestinian father and son return to their village 25 years after it was evacuated to make way for an archeological excavation of Jewish ruins. Image by COURTESY OF THE BERLIN INTERNATIONAL FILM FESTIVAL

The Berlin International Film Festival, which unspools in the German capital each February, is Europe’s largest film fest. This year’s installment, which ran from February 10 to 20, featured four Israeli productions and a number of films that dealt with Jewish issues, not including the Coen Brothers’ “True Grit,” which opened the festival with a splashy star-studded red carpet gala.

Nir Bergman’s “Intimate Grammar” (“Hadikduk Hapnimi”) was a hit in the festival’s Generation Kplus section of films for children and adolescents. Based on David Grossman’s celebrated novel “The Book of Intimate Grammar,” this sensitive and well-crafted film follows Aharon Kleinfeld (Roee Elserg), the adolescent son of Holocaust survivors in 1960s Jerusalem who, in a move reminiscent of Gunter Grass’s “The Tin Drum,” refuses to grow. Bergman, who is best known for his 2002 film “Broken Wings” (which also screened at the Berlinale), coaxes tender and often humorous performances from a cast that includes Orly Silbersatz as Aharon’s overbearing mother, Rony Tal as Aharon’s love interest, Yaeli, and Evelyn Kaplun as the mysterious and beautiful Miss Blum. At its midday premiere, the tragicomedy earned loud ovations from a youthful audience.

Israeli documentarian Tomer Heymann followed up his 2010 Berlinale entry “I Shot My Love,” with the family portrait “The Queen has No Crown.” The queen of the film’s title is the Noa Heymann, the director’s mother. Three of her sons have left Israel for better opportunities in America. Noa, a divorcee, has stayed behind with her two unmarried sons, but mourns the loss of her other children. Premiering here in the Panorama section of world-class independent and art-house cinema, “Queen” mixes old Super 8mm and video footage to tell this poignant and complex family saga about love, loyalty and national, religious and sexual identity.

A double portrait of two women united by the memory of trauma, Michal Aviad’s “Invisible” (“Lo Roim Alaich”) contained striking similarities to the Israeli competition entry “Lipstikka.” Avaid’s feature film debut is inspired by the true crimes of a serial rapist that were committed in Tel Aviv in 1978. A left-wing activist played by Ronit Elkabetz and a television editor (Evgenia Dodina) meet accidentally and recognize each other from 20 years earlier as victims of “the polite rapist” (so called because he asked his victims to lovingly stroke a mole on his back during the act). The confrontation awakens long-suppressed memories that lead the women to investigate their former tormentor’s fate. Despite visceral performances from the two leads, especially Elkabetz as a tough yet wounded Lily, Aviad’s film never really gets off the ground. When all has been said and done, one is left wondering what it was, in fact, that the protagonists went through.

Screening in the main competition program but exempt from the awards, Wolfgang Murnburger’s “My Best Enemy” (“Mein Bester Feind”) was a curious blend of closely observed historical drama and Holocaust comedy. The Austrian production starred popular German star Moritz Bleibtreu as Victor Kaufmann, son of a wealthy Jewish gallery owner in 1930s Vienna. The “best enemy” of the title is Rudi (Georg Friedrich), a non-Jewish servant’s son who grew up under the same roof as Victor. When Germany annexes Austria, Rudi informs on the Kaufmanns, who have in their possession a Michelangelo drawing that Hitler wants to present Mussolini as a token of Axis friendship. The film’s first half, which traces the Kaufmanns up until the Anchluss, plays as straight-up 1930s drama. The second half, which takes place largely in concentration camps and Nazi interrogation cells, plays as farce. Here, through a series of highly implausible events, Victor and Rudi swap uniforms in a hilarious climactic battle for the missing Michelangelo. “My Best Enemy” is no great film, but it’s diabolically entertaining, for the absurdity of its situations and the tight, comic timing of its excellent ensemble cast. Watching Bleibtreu play a Jew, however, one cannot forget his erratic and exaggerated performance as Joseph Goebbels in “Jew Suss: Rise and Fall,” which premiered at last year’s Berlinale.

And in the short film section, Dani Rosenberg and Yoav Gross’s documentary, “Susya,” follows a Palestinian father and son who return to their village 25 years after it was evacuated to make way for an archeological excavation of Jewish ruins dating back to Roman times. Why this somber and provocative film was bizarrely juxtaposed with the disappointing Arcade Fire-inspired short, “Scenes from the Suburbs,” from indie favorite Spike Jonze (né Adam Spiegel), is anyone’s guess.