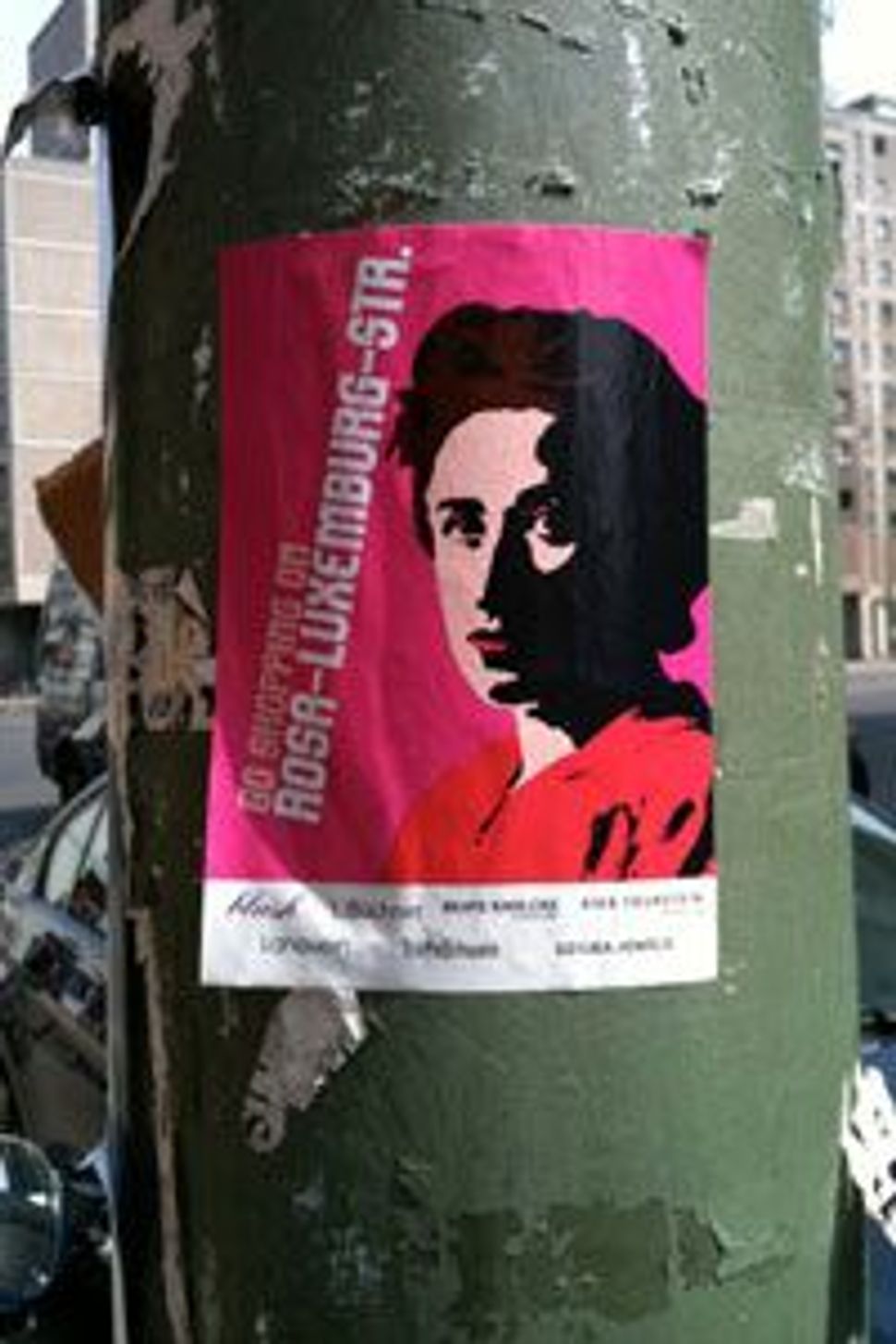 Inappropriate Capitalism: Even Rosa Luxemburg, doyenne of
German communism, has been appropriated by consumer capitalism. Image by Joel Schalit 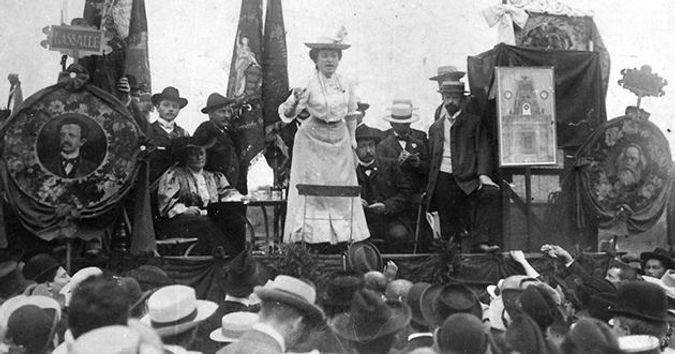 Rosa of the KPD: A strident public speaker, Luxemburg is here addressing a crowd in Stuttgart in 1907. Image by VERSO BOOKS

‘It’s located on Rosa Luxemburg Straße,” she said, “Two blocks from Alexanderplatz. Just take the train, and I’ll meet you there.” Savoring the combination of literary brand names wrapped into that sentence, it all made sense to me. The invitation had been extended by an old friend I’d met through punk circles, in London, during the 1990s. She’d since moved back to Germany to get better social services for her children, both of whom are disabled. “You’ll love the burritos,” she said before hanging up the phone.

Like the rest of East Berlin, save for the name of the street, there is hardly a trace of political correctness or, as the late communist intellectual herself would likely have it, “revolutionary spontaneity” in this post-Cold War restaurant. Styled after a San Francisco nouvelle taqueria and named for a municipal park in that city’s Mission district, Dolores is a facsimile of what is already a WASP adaptation of an ethnic fast-food joint. Of course it would be located on Rosa Luxemburg Straße. If this street was about anything, it was about making allusions — to America, to the left, to dead Jewish women.

As Europe lurches continually to the right, places like this repeatedly call out for the real thing, if not in the form of politics, perhaps in documentaries, or in the books on which they ought to be based. Such is the impression one gets from reading the English edition of “The Letters of Rosa Luxemburg.” The first of a projected 14-volume collection of translated works, this new collection, laboriously edited and translated from correspondence written in four different languages — German, Yiddish, Russian and Polish — is the closest you’ll get to a time machine.

Murdered by Freikorps paramilitaries at the age of 47, the Polish-born co-founder of the Communist Party of Germany (KPD) had already amassed a substantial legacy. Not just for her fellow anti-capitalists struggling to effect a proletarian revolution, but also for women striving for equality, Luxemburg’s writing has a particularly contemporary quality to it, which helps disguise its actual age. Obsessed by the idea of agency, Luxemburg’s theory of spontaneity predates the fierce debates about the decline of the subject in postmodern and leftist critical theories that have been standard fare since Michel Foucault.

Particularly hostile to the notion of bureaucracy, critical of the failings of “revisionist” (read Social Democratic) and Bolshevik leadership, Luxemburg aspired to a kind of revolutionary consciousness that she believed could be realized only by working people who, to paraphrase philosopher Immanuel Kant, under the right circumstances could govern themselves. Whether this is actually possible or not is a different story. Nonetheless, it was Luxemburg’s firm belief that the proletariat could aspire to such that helped fuel her faith in the possibility of creating a new society. 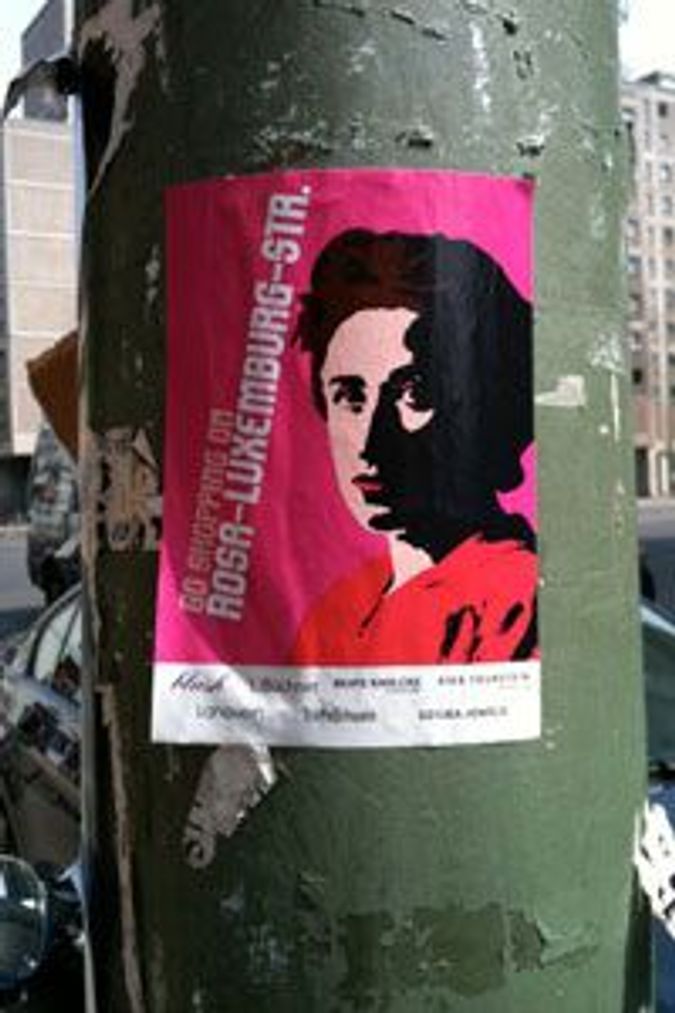 Inappropriate Capitalism: Even Rosa Luxemburg, doyenne of
German communism, has been appropriated by consumer capitalism. Image by Joel Schalit

Throughout this collection of letters, dating from 1891 to her death, in January 1919, Luxemburg never loses faith in this vision of human nature. Despite going to prison, despite her conflicts with comrades and innumerable private stresses, she remains defiantly committed to her principles. As philosophically sophisticated and interesting as her more theoretically inclined work is, “The Letters” is more personable, albeit memoirlike, than a comparable collection, such as “Letters From Prison” by her Italian junior, Antonio Gramsci. Though containing numerous ideological and theoretical digressions, this collection is as valuable for the personal information it discloses.

No slouch when it came to wearing her heart on her sleeve, Luxemburg had zero difficulty unburdening herself. Her correspondence with her lover, Leo Jogiches, leaves an incredibly strong first impression in this regard. A literary and political collaborator, as well as her romantic partner, Jogiches always received brutally frank letters from Luxemburg. Finances, newspaper publishing, politics and their tempestuous relationship — she touches on nearly every single potential subject that could be discussed. Often complaining of how exhausted she is, Luxemburg nonetheless insists on taking the time to fully recount her activities.

It is precisely this energy — relentless, creative and consistently probing — that makes what would be an otherwise laborious read surprisingly accessible. Paced almost like a novel, the 28 years covered by this collection pass by almost too quickly. Sometimes I wish I could have read a reply from one of her numerous correspondents. One cannot help but wonder how she retained her optimism, especially considering the turmoil Germany was undergoing at the time. The collection ends days before her death, on an upbeat note, with Luxemburg telling Clara Zetkin how optimistic she is about the progress of the KPD. Considering how influential her work would become, Luxemburg had every reason to feel proud of her accomplishments.

Based in Berlin, Joel Schalit is the editor of Souciant. His most recent book, “Israel vs. Utopia” (2009), is available from Akashic Books.