Out of the Shadow of Pollock, Lee Krasner Defies the World 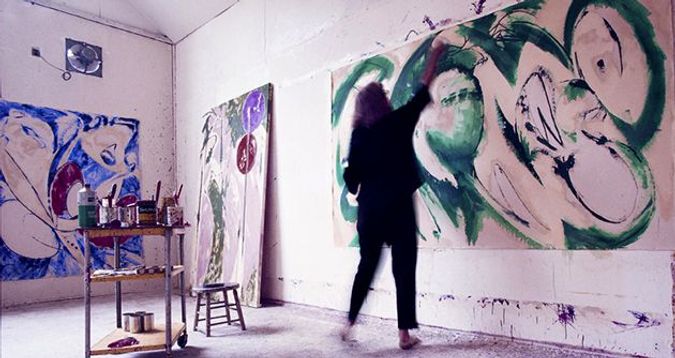 Going Green: Krasner works on the bold sweeps of her 1969 ?Portrait in Green,? at her East Hampton studio. Image by MARK PATIKY

In 1956, the artist Jackson Pollock was killed in a car crash in Springs, on the South Fork of Long Island. He was 44 years old and drunk when he drove his Oldsmobile convertible into a tree one fateful August night. He died less than a mile from his home; his mistress, who had been in the car with him, survived the accident.

Not only did this tragic event seal Pollock’s towering legacy and romanticize his troubled life, but it also forever cast a shadow on the reputation and career of the wife he left behind, Lee Krasner. Years after his death, Krasner would bristle at being identified as his widow first and then as an artist in her own right. A masterful new biography attempts to rectify this.

“Lee Krasner,” by author and scholar Gail Levin, a professor at Baruch College and the Graduate School of the City of New York, is written with unassuming grace. This rigorously researched, straightforward account attempts to set the record straight about Krasner, who died in 1984 at the age of 75. (Levin argues that previous biographical accounts are riddled with inaccurate and incomplete information.)

In 1971, at the age of 22, Levin met Krasner and came to regard her as a mentor and friend. She wrote that Krasner “reminded me of my grandmother.” Although she was deeply fond of Krasner, Levin does not hesitate to present her flaws. This is not a hagiography by any means, yet the artist could not have found a more gifted biographer to retell her story and argue her case.

Krasner, who studied with Hans Hofmann and was influenced by his work, did not owe her career to her more famous husband. She was no passive muse. In fact, by the time she and Pollock met, in 1936, Krasner was the better-known and more accomplished artist and, with her avant-garde circle, already a key figure in the nascent Abstract Expressionist movement.

Her pioneering style of painting and collage was cultivated before Pollock began to develop his signature drip-painting technique. And it was she who introduced Pollock to such important art world figures as critic Clement Greenberg, and to such contemporaries as Willem de Kooning.

She was born Lena Krassner in 1908, just weeks after her mother had immigrated to New York from a shtetl in what is now central Ukraine. (Her father awaited them in Brooklyn.) As Levin notes, virulent anti-Semitism was sweeping through Eastern Europe at the time — and, like many Russian-Jewish families, the Krassners longed to escape.

As a first-generation American with assimilation anxiety, Krasner was an outspoken, willful child rebelling against the traditions of her Old World parents. Her irascible nature was formed in childhood: She refused to sing Christmas carols at school, and defied authority at every opportunity.

She was fiercely independent, a quality that hardened into an abrasive, self-protective exterior as she got older. Although Krasner often seemed to be her own worst enemy, she remained confident. No matter how harshly she was criticized, she was unwilling to launch a charm offensive in service of her career.

She and Pollock met at a party; he was drunk when he approached her. (At the age of 24, he was already an alcoholic.) She later recalled, “I was terribly drawn to Jackson, and I fell in love with him — physically, mentally — in every sense of the word.” By the time they were married, in 1945, his drinking had steadily increased, yet she was endlessly nurturing. “Krasner was Pollock’s facilitator in the world,” Levin writes. “She was also his cheerleader, guardian, and secretary.”

Although Pollock was also supportive of his wife’s work, his paintings drew more interest from collectors. This was disheartening to Krasner, but it did nothing to slow her productivity. Interestingly, Levin mentions that Krasner painted from right to left on her canvases, “just as one would write Hebrew lettering, which she had studied as a child.” (She adds that no one considered the possibility that Krasner was dyslexic.)

Levin chronicles the sexist snubs Krasner endured in the art world from critics and peers alike: Barnett Newman blithely dismissed her, and she felt slighted by Mark Rothko and Robert Motherwell. Clement Greenberg, a close friend, turned to her (rather than the diffident Pollock) for intellectual, wide-ranging conversations about art — but he wrote exclusively about Pollock’s work, ignoring Krasner entirely. One sculptor friend, Wilfrid Zogbaum, said of Krasner that “there is that extreme ambition in her that is at times a bit frightening. One doesn’t know whether to admire or despise it.” There would have been no such caviling at ambition in a male artist.

By 1951, Krasner’s output began to suffer as she threw herself into the task of caring for her dysfunctional husband. Her ardent devotion, and her futile efforts to stop his binge drinking, took a toll on her physical and mental health. “His needs, which may have initially appealed to her wish to be maternal,” Levin writes, “had by now become suffocating.” Greenberg later called Pollock “the most radical alcoholic I ever met, and I met plenty.”

Five years later, Pollock was dead and Krasner was a widow. Before his death, he’d been cheating on her and was mired in depression, leaving him largely unable to function. Yet Krasner’s love remained steadfast, and she tended passionately to his posthumous legacy.

After Pollock died, she returned to her own canvases, working in his former studio at their shared home, which is now a national historic landmark, open to the public for tours. Some critics felt that there was a newfound energy, audacity and rawness to her paintings. Freed from Pollock’s destructive grip, she still suffered personally — she was depressed and had insomnia — but began to thrive again as an artist, earning her first solo retrospective at London’s Whitechapel Gallery in 1965. Unfortunately, she did not live to see the long-planned retrospective of her work at New York’s Museum of Modern Art in 1984, but died with the satisfaction that it was planned.

Nearly 30 years after Krasner’s death, where does her reputation lie? Arguably, like second-generation Abstract Expressionist Joan Mitchell, she still ranks high among the most underrated American artists of the 20th century. Both are represented in major museum collections and command high prices at auction, but hardly at the level of their male counterparts.

Anyone who doubts that Krasner has not gotten her due can visit New York’s MoMA between now and April 25, while a major exhibition of Abstract Expressionist works is on view. The show’s cover image? “Number 1A” by Jackson Pollock. He owns the joint: His work is seen everywhere you turn. He looms large. It’s true that a few women artists have been tossed into the show: Mitchell, Grace Hartigan, Helen Frankenthaler — along with Krasner, of course. But as ever, this brave, radical artist remains a mere footnote. With luck, Levin’s fascinating and absorbing biography will change that.

Carmela Ciuraru has published several anthologies and is the author of “Nom de Plume: A (Secret) History of Pseudonyms,” coming out in June from HarperCollins.

Out of the Shadow of Pollock, Lee Krasner Defies the World