Novel Stance for a Serial Biographer 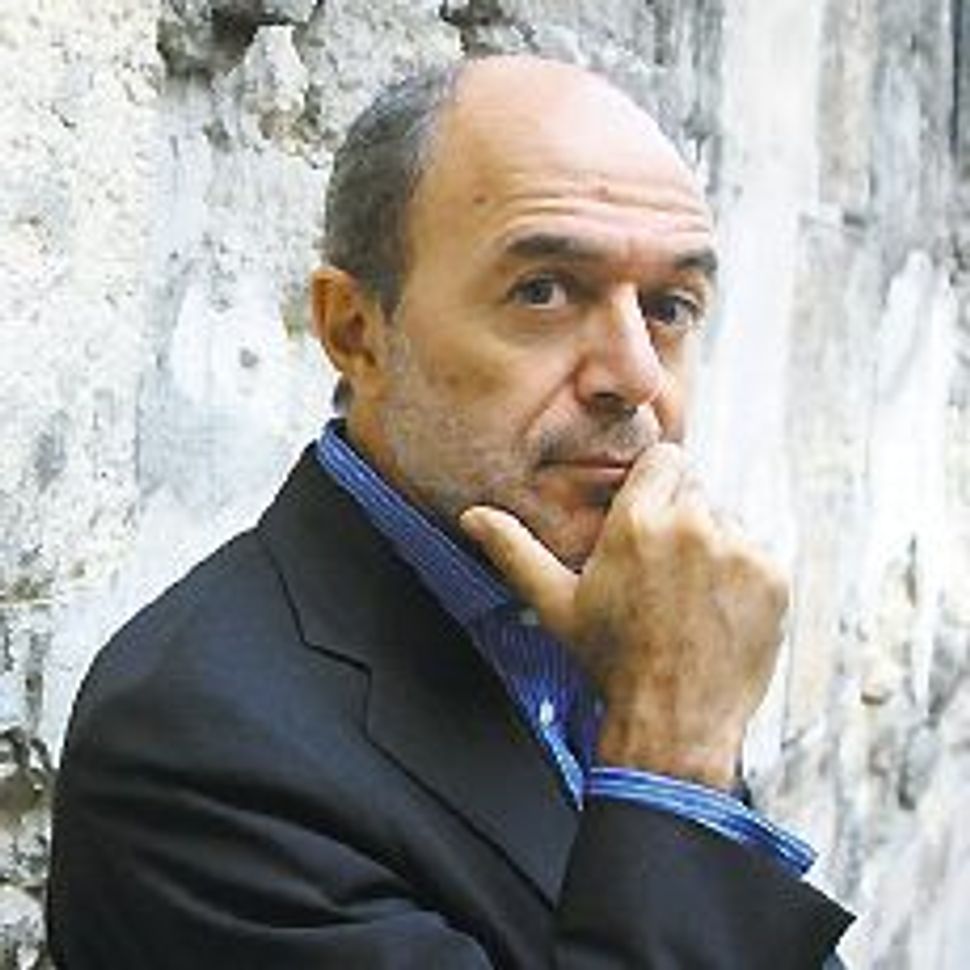 The Book of Job has inspired English-language masterworks from William Blake’s poetry to Muriel Spark’s novels “The Comforters” and “The Only Problem,” but France — especially Bible-resistant, post-Revolutionary and secular France — has lagged behind in such inspiration. Until now, that is.

Pierre Assouline, a French-Jewish biographer, novelist and journalist born in Casablanca, Morocco, in 1953, has long dazzled French readers with a literary output both prolific and excellent, plumbing historical and artistic depths with particular sensitivity to recent historical torments. His latest book, “Vies de Job” (“Lives of Job”), recently published by Les Editions Gallimard, is ostensibly a vast autobiographical novel about a writer who investigates the meaning and resonance of the biblical story of Job, or “the just man oppressed by injustice,” as Assouline describes him.

“Lives of Job” also notably offers precious insight into fundamental motivations for Assouline’s entire literary career. Readers of Robert Alter’s much praised 2010 “The Wisdom Books: Job, Proverbs, and Ecclesiastes: A Translation With Commentary,” from W.W. Norton & Company, and Carol Newsom’s insightful 2003 “The Book of Job: A Contest of Moral Imaginations,” from Oxford University Press, will find much new food for thought in Assouline’s acutely personalized study, starting with the obsessively recurring themes in his many publications.

Assouline’s biographies (the writer calls himself a “serial biographer”) have been devoted to highly diverse subjects, yet an indelibly recurring theme is Jewish history and culture. Those works that have been translated into English are “Hergé: The Man Who Created Tintin,” from Oxford University Press in 2009, offering a fair-minded account of the Belgian cartoonist’s work published in fascist wartime publications, and “An Artful Life: A Biography of D. H. Kahnweiler, 1884–1979,” from Grove/Atlantic in 1990, about the noted Jewish dealer of Picassos, among other works. Assouline’s as-yet-untranslated nonfiction books are no less involved with Yiddishkeit, including 1997’s “Last of the Camondos” (“Le Dernier des Camondo”) from Les Éditions Gallimard), a study of the family of French Sephardic art collectors murdered by the Nazis; 1983’s “Monsieur Dassault,” published Les Editions Balland, about French-Jewish aircraft tycoon Marcel Dassault (born Marcel Bloch and imprisoned in Buchenwald during the war); 1985’s “L’épuration des Intellectuels,” 1944–1945 (“The Purging of Intellectuals: 1944–1945”), from Les Editions Complexe, on the postwar punishment of Nazi collaborators, and 1986’s “Une Éminence Grise, Jean Jardin, 1904–1976” from Les Editions Balland, describing a high-level civil servant who ran the office of French Nazi collaborator Pierre Laval in the early 1940s. All of the above, brilliantly researched and highly readable, make the cumulative impression of an eternal return to Judaism subject matter of prime importance.

If anything, this inescapable theme is more heavily laden with tragedy in Assouline’s novels, which are similarly concerned with the Nazi occupation: 2005’s “Lutetia” from Les Editions Gallimard, about the posh Paris hotel of that name, which, during the Nazi occupation, served as headquarters for German military intelligence and, immediately after the war, as a shelter for returning deportees; 1997’s “Le Fleuve Combelle” (“Combelle River”) from Les Editions Calmann-Lévy, a fictionalized view of French journalist and Nazi collaborator Lucien [Combelle, and 1998’s “La Cliente” (“The Client ”) from [Les Editions Gallimard][15], about wartime letters of denunciation preserved in official French archives, and the effect these letters had on one family.

The emotional sources of these many works by Assouline, and his ferociously productive work ethic, are revealed for the first time in “Lives of Job.” Amid much musing about the resonance of Job’s story on creative spirits such as Emmanuel Levinas, Primo Levi and Spark are agonizingly self-revelatory pages about the 1969 death of Assouline’s brother, Jean-Jacques, at age 19 in a car crash. Vacationing with his family in Spain, Jean-Jacques took a joyride in his father’s car, made possible by a surreptitiously copied ignition key — which 16-year-old Pierre knew, but did not reveal to his parents out of fraternal solidarity. Hospitalized after the accident, Jean-Jacques “stupefied” doctors for a time with his “resistance” (in French, “résistance” refers to stamina, while La Résistance is the wartime opposition movement to the German occupiers), according to Assouline, who praises Job for precisely this capacity.

Among authorities cited in “Lives of Job” is the French neuropsychiatrist and Holocaust survivor Boris Cyrulnik, who has written eloquently on the vital importance of resilience for sufferers of tragedy. Assouline states that just as Monsieur Jourdain in Molière’s comedy “Le Bourgeois Gentilhomme” discovered that he had been speaking prose for years without realizing it, so Assouline himself had been unconsciously utilizing Cyrulnik’s concept of resilience to survive his family’s disasters. The massive pain — mixed with guilt — over the loss of his brother was augmented by his father’s death from metastasized cancer more than 20 years later, when Assouline was 37. As Assouline recounts, revealing the basic motivations for his biographies: “One day I understood that I had recomposed the lives of great men in order to derive substitute elders. My family on paper is a team of elder brothers.”

Assouline explains that the shock of his brother’s death distanced him from religious faith, whereas his father’s demise brought him closer to traditional observance once again. In a particularly moving passage, he recites the Sh’ma Yisrael over his father’s deathbed. After describing this poignant scene, Assouline adds, in prose shaped by biblical syntax: “Happy are those who can claim never to have experienced any woes which could not be cured by an hour of reading; for myself, The Royal Library of Alexandria would not have sufficed.”

The intense preparatory research required for Assouline’s books, whether biographies or historical fiction, acquires, through the account of his experience in and for “Lives of Job,” a new aura of emotional significance, enhanced by historical awareness of the Holocaust. Assouline’s research for “Lives of Job” included a lengthy visit to the library of the École Biblique et Archéologique Française in East Jerusalem. There he was informed of a key text, Zvi Kolitz’s 1946 short story, “Yosl Rakover Talks to God,” still available from Vintage Publishing. First published in Yiddish in Di Idische Zeitung, a now-defunct Buenos Aires daily, “Yosl Rakover Talks to God” is set in the Warsaw ghetto in 1943, as the narrator, a Polish Jew, investigates how God can seem to ignore the suffering of the righteous. This suits Assouline’s theme so closely that he refers to the character Yosl Rakover as “my brother in Job.” Any such self-identifications are undogmatic, for, as Assouline opines, “The Book of Job is as much a collection of poems as it is a collection of problems.” Its interpretation is, like poetry criticism, necessarily unscientific.

Even so, with somber exactitude Assouline ponders the many problems of comprehension and meaning raised by works inspired by The Book of Job, from Israeli author Hanoch Levin’s 1981 avant-garde play, “Job’s Passion,” to the Coen Brothers’ 2009 film “A Serious Man.” Setting aside works by such classical composers as Darius Milhaud and Paul Ben-Haim as too literally inspired by The Book of Job for his taste, Assouline prefers the 1944 song, “Don’t Explain,” co-written and performed by Billie Holiday, as closer to its metaphoric heart. The message of Holiday’s song, according to Assouline, is “to love in spite of everything,” just as Job himself kept the faith through his travails, never accepting his wife’s notorious advice: “Curse God and die!”

Watch a video of Pierre Assouline speaking in February about his “Lives of Job”:

Click here to watch Assouline, in 2007, speaking about other recent works

Novel Stance for a Serial Biographer