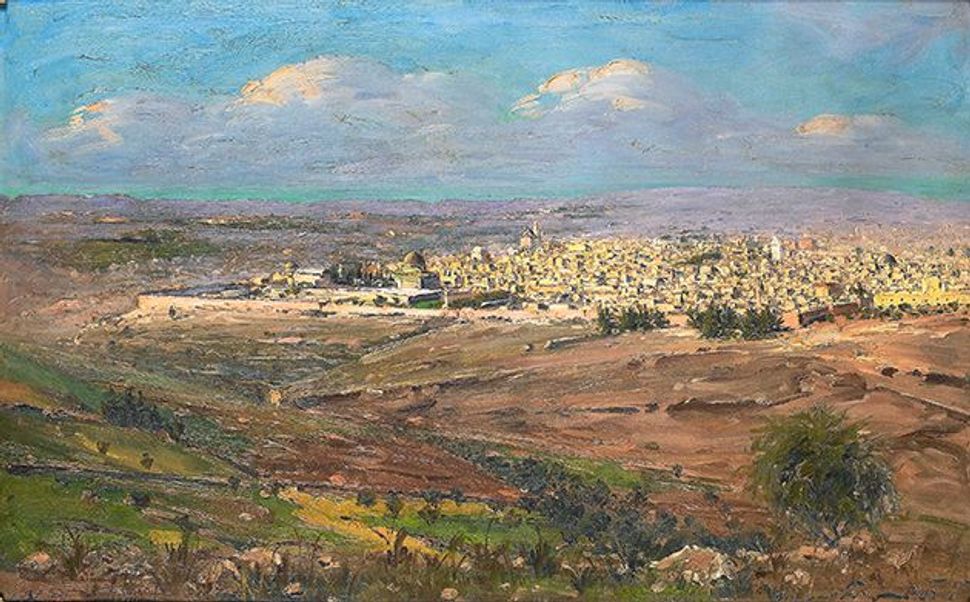 Light and Green: Even the rocks from Jerusalem, Blum?s favorite subject, seem to glow under his encouraging brush. Image by Ludwig Blum, ?Jerusalem , View from mount scopus,? 1949, Courtesy of Ben Uri Gallery

British-based Zionists were heartened to hear that their celebrations of Israeli Independence Day could include a visit to the most important solo show by an Israeli artist in London this year. By moving the closing date of “The Land of Light and Promise: 50 Years Painting Jerusalem and Beyond, Ludwig Blum (1891-1974)” from April 24 to May 29, the Ben Uri Gallery extended the exhibit to encompass the annual flurry of modern Jewish observances that run the gamut of emotions: Holocaust Rememberance Day, Independence Day and Memorial Day.

But, unlike other Israeli artists who dwell on, amplify or pointedly deny the conflicted context of their work (such as Avigdor Arikha, Sivan Hurwitz or Yaacov Agam, respectively) Ludwig Blum, who lived through some of the greatest upheavals in modern Jewish history, seems to largely skate over the wars and tragedies of the 20th century. Many of his paintings were lost in the inferno of the Second World War. Those that remain are mostly technically adept landscapes whose luminous simplicity often comes across as simple-minded.

Born in Brno, Moravia, in 1891, Blum lived through both world wars, serving for Austro-Hungary from 1914 to 1918. He was active in the Israeli War of Independence, in which he lost his son, Elie, and lived in Israel through the Suez Crisis, the Six Day War and the Yom Kippur War. After immigrating to Israel in 1923, he continued to be a frequent and committed traveler back and forth between Israel/Palestine and Czechoslovakia in the 1920s and 1930s. This was partly in order to sell paintings in Europe but also, significantly, because he continued to think of himself as a Czechoslovakian artist as well as an Israeli one.

By 1932, Blum and his family were firmly settled in Jerusalem. Although a contemporary of the pioneers of the first kibbutz, Degania Aleph, Blum came to the Holy Land as an adult artist and was deeply moved, but unchanged, by his adopted home. Photographs of Blum at his easel, painting en plein air, illustrate what one might expect, given the placid mastery of his work: His hat and overcoat, his entire manner even, seem directly transplanted from Vienna, where he had trained.

The brightness of the pictures and their competent composition make them desirably decorative, but they remain cheerfully aloof and stylistically conservative. In fact, the recent increase in interest in Blum’s work seems more related to the relatively unproblematic reabsorption of his work into the central European tradition than any inherent value of his oeuvre. He’s an Israeli artist for whom it took little courage by the local authorities to hang a plaque in Brno, in the Czech Republic, describing him as a “Painter of Jerusalem.”

For, despite his physical location, Blum was an orientalist, looking at the East with Western eyes. As Dalia Manor points out, in her fine essay in the satisfying exhibition catalog, the influence of British artists David Bomberg and David Roberts on Blum “demonstrates that his interest in views of the Holy Land was not merely [italics added] that of a 19th century Orientalist.”

The exhibition stretches around the Ben Uri’s cramped quarters in St. John’s Wood, reminding the visitor with each painted vista that the gallery (properly called the Ben Uri Gallery: The London Jewish Museum of Art) is quite properly craving recognition, and yearning for a building of its own. The small downstairs rooms present close-up views of portraits and cityscapes that verge on the claustrophobic. And — for the gallery that brought us the provocative 2010 exhibition “Cross Purposes: Shock and Contemplation in Images of the Crucifixion” and the overwhelmingly popular exhibition “Apocalypse,” built around its acquisition of Chagall’s “Apocalypse en Lilas, Capriccio” — Blum, albeit with a subject that rarely displays peace, feels like a respite.

The gallery’s coup here is that this is the first major European retrospective of Blum’s work, and the first exhibition in London since his showing at the Royal Academy in 1938. With the exception of the 1920s self-portrait and the enigmatic “Frank, Volunteer Soldier from Canada” (1949) the works are scenes or landscapes with minimal action. Of the 35 works in the show there are some intriguing early views of Tel Aviv and some lush representations of kibbutzim in bloom but more are from Jerusalem than anywhere else.

Blum’s views of Jerusalem paint over the cracks. He adopted the city (and in 1968 it adopted him, granting him the award of “Yakir Yerushalayim” — honored citizen of Jerusalem — for a show that year) and painted it before, during and after its division into West and East. But, just like his own division into West (Brno) and East (Jerusalem), the political partition was a divide he ignored, painting sometimes from memory, sometimes from previous paintings and sometimes, possibly, by crossing over the border for a better vantage point. Perhaps, in the current climate, it’s expeditious to display competent and gently luminous art from Israel, but it is neither artistically nor politically interesting.

Dan Friedman is the Arts and Culture editor of the Forward. Contact him at dfriedman@forward.com