For the Modern Sholom Aleichem, Click on This Blog 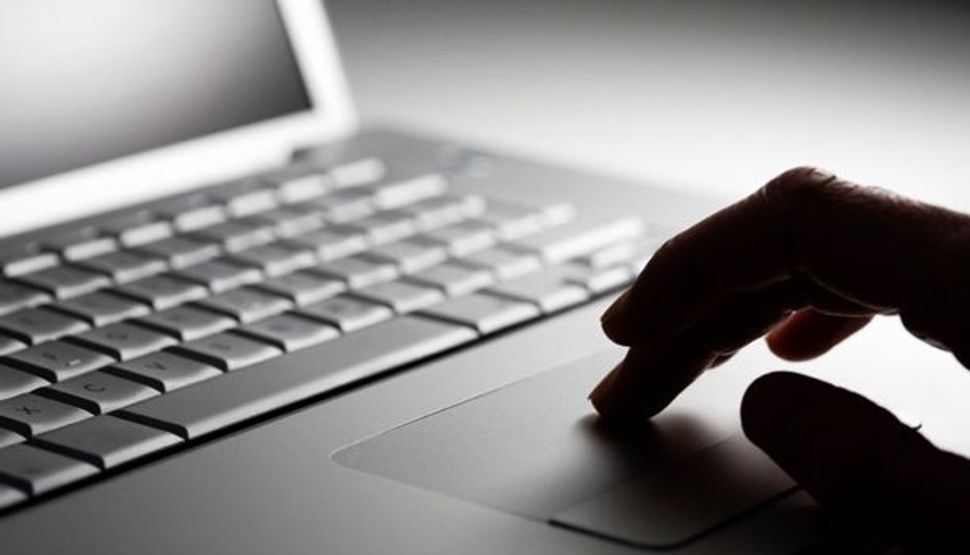 A literary talent is stalking the web, but his name is a mystery. A Yiddish blogger, who has been compared to leading writers of the past two centuries goes simply by the pseudonym Katle Kanye, meaning “rod cutter” or “thick headed.” Combining the vernacular of the Yiddish street with the language of rabbinic literature, Katle Kanye, who writes at katlekanye.blogspot.com muses about daily life in the Hasidic world. Few situations escape his ironic eye, or in this case, his keyboard.

“If Sholom Aleichem is considered the Yiddish Mark Twain, then Katle Kanye is the modern Sholom Aleichem,” said Shulem Deen, a former Skverer Hasid who founded the Orthodox dissident website Unpious.com. Eve Jochnowitz, a Yiddish teacher and Jewish culinary historian, said Katle Kanye most reminds her of the grandfather of Yiddish literature, Sholem Yankev Abramovich, better known as Mendele Moykher Sforim. “Katle Kanye assumes a very broad and deep knowledge of Jewish texts in his readership,” she added. “The satire works best for people to whom the language is familiar.”

Katle Kanye writes amusingly about Hasidim improvising on airplanes, carrying their bags of sandwiches and drinks aboard and using a tiny airplane drinking fountain to ritually wash their hands. He curses the creator of the confusing Hebrew language keyboard as a self-hating Jew.

“Part of the reason he is so amusing is because of the way he effortlessly blends a secular (sort-of) literary Yiddish with the style of language often heard when discussing ‘holy’ subjects,” notes Baal Devarim, a blogger whose name means “master of words” and whose blog title — “The Other Side” — is a pun on a nickname for the devil in Hasidic and kabbalistic parlance. Baltimore-based translator and poet Zackary Sholem Berger said that Katle Kanye “commands a lot of different registers at once.”

Secular literary Yiddish is taught in classes at the YIVO Institute for Jewish Research and in a writing workshop given by Forverts Editor Boris Sandler. Yugntruf — Youth for Yiddish, an organization for young Yiddish speakers, also hosts a monthly gathering where writers read their literary work. But Katle Kanye demonstrates the possibility of quality literary writing coming from the Hasidic community.

“Don’t count out Hasidic Yiddish from developing a literature,” said Yitzchak Schonfeld, a business consultant who runs Cholent, a weekly gathering for Jews on the margins of Orthodoxy. “For those bemoaning the state of Yiddish, go take a look.” Indeed, Katle Kanye’s work stands out all the more for being grounded in a Hasidic world where literary Yiddish is not particularly valued and seldom taught.

The literary range of Katle Kanye is captured by the subheading of his blog, which reads, “Musings and hesitations, observations and experiences, sublime heights and trivial depths of a jovial Hasid in the prelude to the Messianic era.” His original subheading read “Passion of a Hasid; thoughts of a maskil” (modern Enlightenment Jew).

Like many Hasidic bloggers who criticize their community and question their faith, Katle Kanye remains strictly anonymous. For this article, he agreed to be interviewed by e-mail, but would not meet in person. “I fear for my family’s and my standing, my children’s schooling, matches and our livelihood,” he wrote, describing a community “where any view is suspect unless it can be supported by Scriptures or rabbinical sources and where countervailing voices on fundamental issues are rarely voiced formally in public and never in writing.”

Despite lacking a formal literary education, the blogger is a student of many authors. He first encountered secular literature around age 17, in the work of the Yiddish and Hebrew poet Hayim Nahman Bialik. He “opened my eyes to beautiful writing even while utilizing traditional texts,” Katle Kanye recalled. Of Mendele Moykher Sforim he observed, “While I appreciated his humor, I was also taken aback by the stridency and venom in his onslaughts.” He finds I.L. Peretz “lofty… a master short-story teller and almost Chekhovian” in his spareness of language.

Regarding modern Jewish American literature, Katle Kanye writes: “I recall reading ‘Portnoy’s Complaint’ and being tossed on the waves of the narrator’s fury. It expresses a modern rage which [Isaac Bashevis] Singer’s more traditional fulminations cannot match.” Bellow and Malamud do not “sound as Jewish to Hasidic ears as, say, Joseph Roth or S.Y. Agnon. The latter is particularly appealing, as his Hebrew owes more to the traditional texts, rabbinical Hebrew and Hasidic story books than it does to modern Hebrew.”

Outside the Jewish firmament, Katle Kanye’s pantheon includes P.G. Wodehouse, whose humor, “like Sholom Aleichem’s, lies in the storytelling itself and not just in what the characters say and do.”

In his turn, Katle Kanye has garnered praise not just from the secular Yiddish literary establishment, but also from other Hasidic writers. A blogger known as Heathen Hassid, who identifies both as a Hasid and an atheistic, cultural Jew, writes: “I wish I had the zitzfleish (ability to stay seated) to write like him.”

Someone should give this mystery man a book deal.

The following selection from Katle Kanye’s blog was written in response to a letter by an anguished and conflicted Hasid to the advice columnist of the Forverts. (Translation by Zackary Sholem Berger.)

“The walls [of our Hasidic community] aren’t as narrow as you think. And even if they are, you need to learn how to push them apart. Not just by leaning on them, because Hasidic feet bear weight with difficulty, but shoving them out to make them wider. I guess you’ve already bitten into the fruit of the Tree of Knowledge: God didn’t come to hunt you down — “Where are you?” — and no one came to chop your legs off. If you’ll give a good push, you’ll see that the walls are made of rubber and the guards at the gate are sleeping with unloaded guns. You can come and go as you please, with only two conditions: No bringing others with you, and no aiming at them. And, while you’re at it, don’t make a racket. You know, of course, that the first set of tablets wasn’t long for this world because they were given in public.”

Gary Shapiro is a freelance writer living in New York.

For the Modern Sholom Aleichem, Click on This Blog