The Chagalls, Joined in a Sketchbook 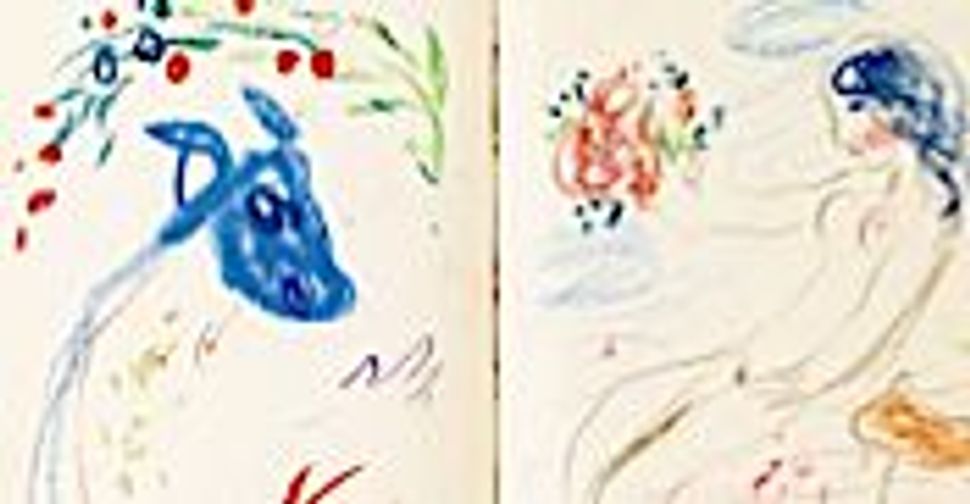 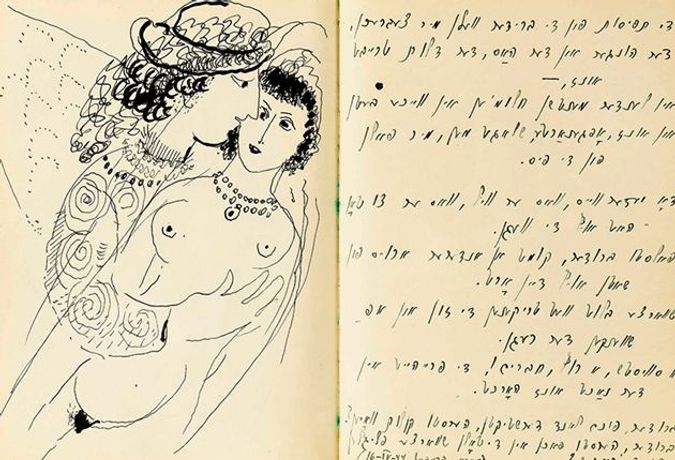 Alone, Without You: The sketch by Marc Chagall early in the sketchbook depicts the couple embracing in a moment of unfettered abandon. It appears facing one of the Yiddish poems that Bella translated from French. Image by Courtesy of Sotheby's

Bella Chagall, the great love of Marc Chagall, began to write in a small hardcover sketchbook in 1942, the year after the couple arrived in New York. On the first eight pages, she translated Yiddish poetry into French as a means of relating to her past — since both France, which she had just fled, and her native Belarus were now out of reach. In a gesture of connection with Bella, following her death in New York in 1944, the artist appropriated the book for his own use. 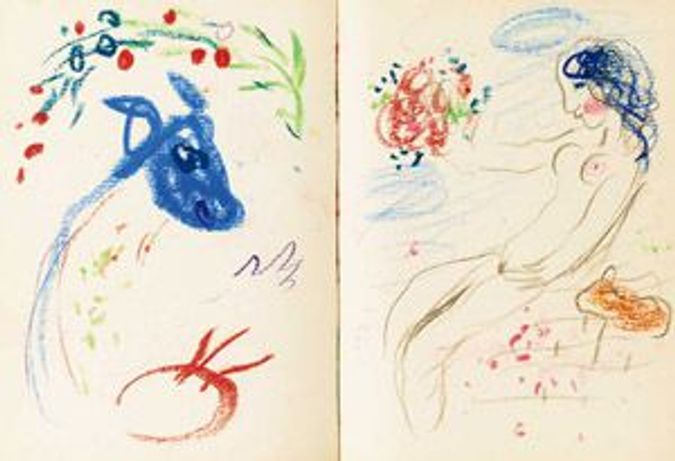 Painter as Bovine? Bella poses for Marc, who paints himself as a blue calf. Image by Courtesy of Sotheby's

Like many artists, Chagall derived much of his inspiration from his own life. His most profound personal experiences crowded his head before erupting onto canvas. But rarely has there been the opportunity to enter an artist’s personal realm in such an intimate manner as we can with this unique sketchbook, on display at Sotheby’s New York until its auction on June 17.

The sketchbook was found among Bella’s possessions at the time of her death. That, and the fact that Chagall continued to use it for 20 years, attests to its importance as a means of maintaining a link to his longtime muse. From 1922, when Chagall and Bella fled the Soviet Union for the freedom, safety and comfort of Paris, it was the artist’s wife who, as a living link to their mutual past in Vitebsk, kept the memories of his early years in Belarus alive.

Until 1965, the artist made use of the remaining blank pages of the 85-page book to create drawings of varied subjects central to his familiar iconography. Farm animals, shtetl scenes, Bible figures and stories, crucifixions, clocks, and male and female couples all cavort on the pages. They range from freehand sketches in black pen to watercolors that are colorful and dense in compositional details.

Chagall’s first spell in France, with his wife and daughter, was highly productive. In the 1920s and 1930s, Paris was a second home. His arrival there was marked by a stylistic break. Enjoying his new life, Chagall turned to local artistic traditions for inspiration, as an attempt at a kind of cultural assimilation through painting.

But in 1941, when the Nazis entered France, his world was turned upside down. Chagall and Bella were forced to flee again, this time to New York, together with many other imperiled artists. His early years in New York were especially traumatic, and Chagall questioned the certainties he acquired during the previous decades. Like many Eastern European Jews who had fled to France, he believed he had found a sympathetic environment. Like them, he saw this new world collapsing under the threats posed by Nazism.

The cataclysmic events on the world stage and in his personal life had a transformative effect on the artist’s work. Compositions filled with joy and fantasy, acrobats and fantastic beasts gave way to somber works expressing the anguish of those forced into exile by violence and disruption. Suffering and sacrifice became frequent themes as darkness and destruction characterized much of Chagall’s output during the wartime years.

The artist explicitly renders the horrors of war and the tragic fate of victims of anti-Semitism. He responds to political as well as personal events using familiar motifs, with the crucifixion the most pervasive and recurring. Employed to address the ongoing destruction of European Jewry, the image of Jesus as a sacrificed Jew became a virtual obsession for Chagall during this difficult period. Whether interpreting Jesus as a significant figure in Jewish history or as a symbol of Jewish martyrdom through the ages, the artist understood Jesus and the attributes associated with him as essentially Jewish.

As if dealing with widespread global suffering were not enough, Chagall’s beloved Bella died in New York in 1944 a few days after contracting a severe case of influenza, and the ominous, unsettled sensibility in his work took on a more personal tone. Chagall’s connection with Russia was finally severed and he was adrift in a world in which he never felt at home. The old images of happy lovers were replaced by ghostly loves. Chagall was pining. The stirrings of fascism, the Holocaust, exile in New York and Bella’s untimely death were all significant in shaping Chagall’s outlook during the 1940s.

Chagall still had 40 years to live and he continued to paint. As his acclaim in the art community grew, he was rewarded with exhibitions at major European and American museums. In l948, Chagall returned for good to France, where he was recognized as one of the most beloved and sought-after artists of the 20th century.

Although the sketchbook drawings are not individually dated, a number of them relate to completed paintings and depict iconography central to the artist’s work. Religious imagery abounds, from portraits of King David with his harp to an ink sketch of a crucifixion rising up behind Moses to the crossing of the Red Sea. There are also numerous portraits of Bella and self-portraits of Chagall.

Employing a highly individual and evocative visual language of symbols and formal strategies, the Chagall sketchbook provides a new introspective view, a fitting tribute to his wife and muse.

Susan Tumarkin Goodman is the senior curator at The Jewish Museum in New York.

The Chagalls, Joined in a Sketchbook