Beneath Black Hats and Shtreimels 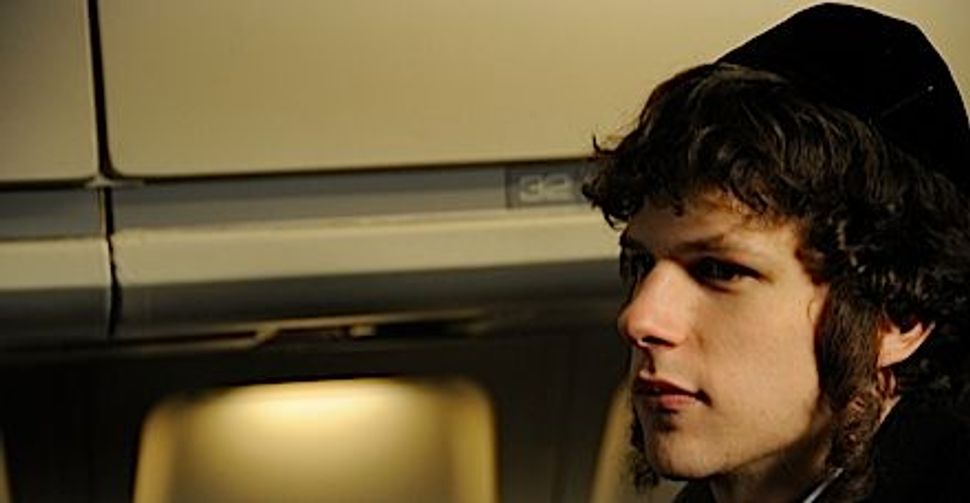 ?New York, I Love You?: Natalie Portman portrays Rifka in a less well-known side of New York. Image by Getty Images

It used to be that if you saw a Hasid in a movie or a TV show, he (and it was nearly always a “he”) was there as a visual signifier of urban diversity and little more. Hasidim appeared only in crowd scenes, or in montages intent on showing the multicultural essence of the American city. Even in the early 1980s you can find them in the pilot episode of “Miami Vice,” bravely representing Miami Haredim and, more broadly, a whole generation of Jews who moved to Florida from the North and refused to change to more appropriate attire.

By the early 2000s, Charlotte was shown having a brief fling with a Hasid on “Sex and the City,” but he was a cipher, there merely to demonstrate the series’s equal opportunity policy toward potential lovers and that nothing, or no one, was too sacred for the show to touch. Hasidim could be counted on to appear and pray whenever ancient Near Eastern deities like Baal or Zuul (the “Ghostbusters” demonic spirit) threatened God’s creations, but they were seldom given any dialogue.

Yet sometime in the past few years, Hasidim started to become actual characters, with their own lines and narrative arcs, though they didn’t exactly become rounded individuals in the process. Today’s fictional Hasidim are no less symbolic or mythic than they were years ago, but now instead of standing quietly in the background, good Hasidim are regularly going bad, leaving the Hasidic world for lives of crime.

The most prominent of these stories is Kevin Asch’s well-meaning “Holy Rollers” (2010), which flirts with profundity but is ultimately a “Say no to drugs” morality tale. The film stars Jesse Eisenberg as Sam Gold, a young Hasid whose self-consciousness over his economic position causes him to fall in with international drug smugglers. As Gold grows more involved with the smuggling operation, he becomes progressively estranged from his family and his religious community.

“Holy Rollers” is the cinematic exemplar of what Alan Mintz, professor of Hebrew Literature at the Jewish Theological Seminary, called “the novel of apostasy.” In his book “Banished From Their Father’s Table,” Mintz placed the dual, linked conflicts of generational change and secularization at the center of Modern Hebrew literature, an argument that could be extended to Yiddish and earlier American Jewish literature. With the notable exception of Shalom Auslander, most prominent contemporary American Jewish writers didn’t experience the rupture with the religious tradition experienced by earlier generations. American Jewish writers today are more likely to pen stories of rediscovering their Jewish roots than of breaking away from tradition.

Contemporary Hasidic narratives provide Jewish writers with a vehicle for exploring the struggle between religion and secularism and intergenerational strife, even when these conflicts are no longer their own. Though probably an allusion neither to Mintz nor to the Talmud, whence Mintz derived his title, there is a scene in “Holy Rollers” in which Sam is literally banished from his father’s table, re-enforcing the idea that apostasy narratives are so important because they challenge the continuity of the family.

The problem with “Holy Rollers” as a crisis-of-faith story is that there is no crisis of faith. Sam doesn’t stop believing in God; rather, he turns to crime and is discarded by his family, starts drinking, wears ugly suits, takes drugs and falls for a nonpracticing Jewish girl (Ari Graynor, looking remarkably like Ke$ha). Only in a movie about Hasidim gone bad would the Jewish protagonist fall for a Jewish woman.

But if the old apostasy narratives challenged the religious community, these newer stories are more likely to question secularism. In “Holy Rollers,” secular culture is not just corrupting, but also corrupt. Amsterdam, where the smugglers purchase Ecstasy, isn’t Baruch Spinoza’s enlightened space, but a site as immoral in its contradictions and excesses as the supposedly backward religious community.

“Unorthodox,” an episode on the ninth season of the NBC-TV police procedural “Law & Order: Special Victims Unit,” preaches a similar point. We’re led to believe that a Hasidic rebbe is sexually assaulting a young boy, while the real perpetrator is a juvenile schoolmate of the victim. The defense attorney portrays the crimes as the consequence of too much sex on TV and the Internet and not enough discussion of its ramifications. Blunt and moralizing, the episode again uses Hasidim as a means of questioning the implicit and explicit values of secular America. It also presents a quasi-happy sexual medium in the form of a Hasidic couple sneaking around their respective families to go on dates. Their respectful and nearly licit kissing may make them outcasts in the Hasidic world, but in the secular world their relationship is an idyll of preindustrial romance.

Though it also prominently features good Hasidim gone bad, “Romeo and Juliet in Yiddish,” which had its American premier earlier this year at the New York Jewish Film Festival, stands out for trying to understand Hasidim as individual people instead of mere symbols of religious tradition. The movie follows a nurse (writer-director Eve Annenberg) with a complicated relationship to Judaism as she reconnects with the religious world by attempting to modernize a Yiddish translation of “Romeo and Juliet.” She doesn’t speak Yiddish (which nobody seems to think is a problem), and enlists the help of several former Hasidim, all petty criminals. Here crime does not so much critique secular culture as it casts the former Hasidim as the attractive heirs to Bohemia.

While there’s nothing inherently new in the idea of discovering the self through quasi-ethnographic research of a strange culture, “Romeo and Juliet” offers a fresh take on the fracturing of the American Jewish community into denominations and nondenominations. The film’s frictions between Chabad and Satmar on the one hand and Hasidic and nonpracticing on the other are just manifestations of the broader divisions in Jewish life. The movie, rightly, doesn’t look to resolve these divisions so much as it tries to find new ways of navigating them. Jews of different backgrounds are brought together at work and in the home, and though they may not tolerate each other’s beliefs, they momentarily look past them.

Likewise, “Holy Rollers” is at its best when it celebrates the nuances and differences of Hasidic adolescence. There’s a terrific scene in which Sam visits his potential fiancée; it’s the first time the two have officially spoken. Their courtship is almost the opposite of the date between Mark Zuckerberg and Erica Albright (Eisenberg and Rooney Mara) in “The Social Network,” where the rapid dialogue and physical closeness suggested an intimacy that they never had. Here, the all-but-married couple sit as far apart from each other as the couch will allow, stare away from each other and speak in only short, factual sentences: “How many kids?” or, “What yeshiva?” Their awkwardness and discomfort serve as a mask for suppressed sexual energy and desire. There’s a great movie to be made of this strange community with a value system simultaneously familiar and unfamiliar — it just isn’t this one.

Hasidim will become fully individuated characters only when writers and directors imagine this community according to its own merits instead of sensationalizing its encounters with the secular world. Oddly, the best way to explore Hasidic difference might be to remake stories of Upper West Side intellectuals in the Hasidic milieu. Instead of a Hasidic version of a drug saga, we could have Hasidic versions of Woody Allen movies. “Hannah and Her Sisters” is more philosophical than nearly every movie about a religious Jewish community today, and its loose structure of members of a family struggling through different questions of faith, fidelity and community is the perfect format for a Hasidic comedy of manners: simultaneously irreverent, dramatic and deeply theological.

“Romeo and Juliet in Yiddish” opens in New York on July 8, at the new Elinor Bunin Munroe Film Center.

Beneath Black Hats and Shtreimels