Philologos: What’s That On Your Head? 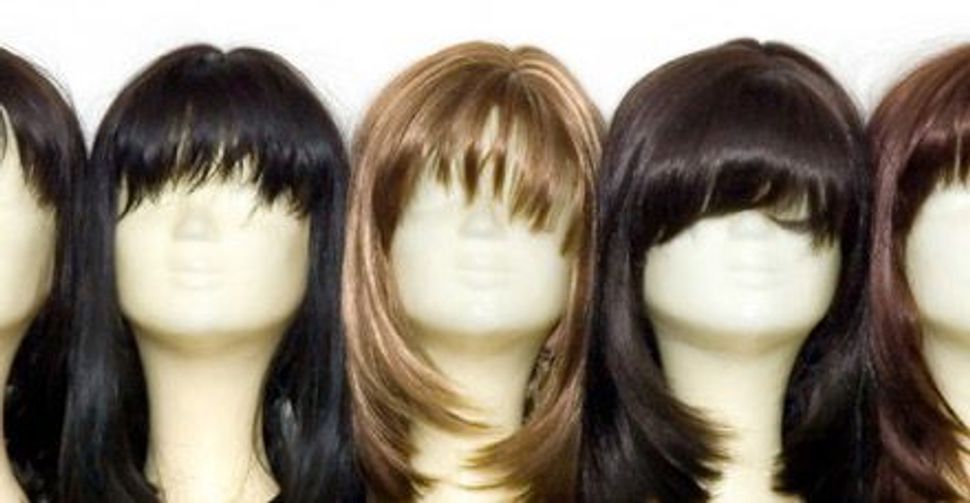 “My mother, who grew up in a Polish shtetl, used the word perukha in Yiddish to describe a lady’s head covering such as a sheytl or turban. Presumably, this came from perruque, which I believe is French for a wig. But how did French get into shtetl Yiddish?”

A sheytl, of course, is the wig worn by some ultra-Orthodox women to circumvent the religious ban on a woman’s hair being seen in public — while as for perruque, it entered Yiddish via Polish, in which it is peruka. (In standard Yiddish, according to my dictionaries, the word is paruk.) The Poles, for their part, took it either directly from French, where it indeed means a wig, or from German, which borrowed it from French as Perücke.

But where does French perruque — or, for that matter, Italian parrucca, Portuguese parruqua, Spanish peluca or English “peruke” and “periwig” (which gives us our plain English “wig”) — come from? What is the etymon hiding behind all these words, which first surfaced in French and Italian in the 16th century, when wigs, occasionally worn by the Romans but subsequently fallen into abeyance, came back into fashion in Europe among both men and women?

There are essentially two different theories about this. One is that the original ancestor of perruque is Latin pilus or capillus, both meaning “hair.” (Despite their similarity, the two words are etymologically unrelated.) Pilus gives us Italian pelo, “hair,” and peloso, “hairy,” while from capillus come Latin capillentum, “wig,” and Italian capello, “hair,” and capigliatura, “head of hair.” Yet while these all seem logical antecedents for parruca, it is hard to account for their turning into it, since although “l’s” can easily become “r’s” (there are Italian dialects in which the word is pilluca), the –uca remains unexplained.

A second theory is that the word derives from either French perroquet or now archaic Italian parochetto, both meaning “parrot,” by means of an analogy between a wig and the parrot’s ostentatious crest. Since, following the discovery of the Americas, parrots arrived in Europe at about the same time that wigs did, it wouldn’t have been unnatural for the two novelties to be associated. (True, the African parrot, like the wig, was already known in antiquity and called by the Greeks papagallos — hence Latin papagallus, Italian papagallo and English “popinjay” — but in medieval Europe it was a rare bird.) Perroquet and parochetto have in turn been traced to a diminutive form of the French or Italian Pierre or Pierro, the English Peter. These were common male names, and presumably, the parrot was called a “little Peter” — that is, a little man — because of its ability to mimic human speech.

You’ve been waiting for the Jewish angle? Here it is. The various forms of Peter entered the languages of Europe from the Greek and Latin New Testaments, where the name appears as Petros and Petrus, respectively. But petros, which is Greek for “rock” (think of “petroleum,” oil from rocks), was not, before Christianity, a Greek proper name. In fact, it was not even Peter’s own real name. Its origins are explained in the Gospel of John, which tells how, in the King James translation, when the Aramaic-speaking Jesus first met a fisherman named Shim’on bar-Yona at the Sea of Galilee, “[he] beheld him and said, ‘You are Simon the son of Jonah: you shall be called Cephas.’” To which John adds, “Which is, by interpretation, a rock.”

In short, perhaps because of his powerful physique, Jesus nicknamed his new disciple Keyfa, the Aramaic word for “rock” (the ‘s’ of Cephas is a Greek nominative ending), which was translated by the Greek New Testament as “Petros.” Ms. Hill’s mother’s perukha may thus go back to a Jewish fisherman who lived 2,000 years ago!

Simon Peter — “Simon the Rock,” as the Gospels sometimes call him — is the subject of a New Testament pun when Jesus is said to tell him, “You are Peter and upon this rock I will build my church.” (Most likely, the punster was not Jesus himself but a New Testament redactor seeking to promote the early Roman Church, of which Peter was the legendary founder.) The same figure of speech also turns up in an ancient Jewish midrash. This can be found, curiously enough, in the compendium of Yalkut Shim’oni, “The Simonic Anthology,” where an exegesis of the verse in the book of Numbers, “From the top of the rocks [tsurim] I see him,” takes “I” to refer to God and “him” to Abraham and continues: “[God] was like a king who wished to build [a castle] and dug down for a foundation and found only mud in many places until he dug in one place and found a rock [pitra!] and said: ‘Here I will make my foundation.’”

One can’t help wondering about this Hebrew midrash’s use of an Aramaicized form of the Greek word petros when three Hebrew words for “rock” — tsur, even and sela — were available. Was its author signaling his awareness of the pun in the New Testament, whose story of Jesus and Peter he was knowingly appropriating for Jewish purposes? It’s hard to avoid that conclusion.

Philologos: What’s That On Your Head?