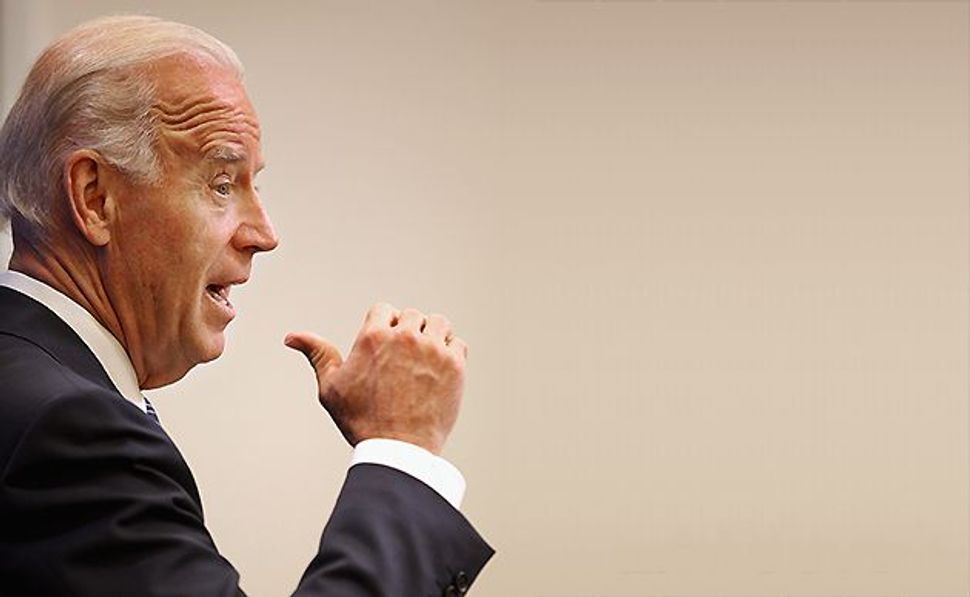 What He Didn?t Say: ?Out there? You should hear the shtick back here!? Image by Getty Images

The contemporary American vernacular has dozens of Yiddish words in it, most of which — maven, schlep, kosher, etc., etc. — mean pretty much the same thing in English as they do in Yiddish. Occasionally, though, Yiddish words domesticated in English have taken on new meanings. This is a natural linguistic process, even though to Yiddish speakers, or to American Jews who have grown up in a Jewish environment, the effect can be a bit jarring. It was for me, anyway, when I saw Vice President Joe Biden recently quoted as saying, in response to attacks on the Obama administration in Washington for not getting its economic act together: “What is the shtick out there? [That] this is a dysfunctional place, [and] can’t get anything done. The single most important thing to do for the markets is to convince them that ‘No, no, no, that’s not true, we can handle difficult decisions and make them!’”

My first reaction upon reading these words was to shake my head at the vice president’s poor command of Judeo-English. A shtick, or its Yiddish diminutive of a shtikl, can mean many things. It can be — and this is its primary meaning — a piece or bit of something, as in, “All I had to eat was a piece of bread and a shtick herring,” or, “To tell the truth, he’s a shtikl schlemiel.” It can be a mode of speech or of behavior, as in, “She always comes on with the same shtick.” It can be part of a play or drama, as in, “There’s this shtick in ‘King Lear’ where Lear loses it completely.” It can be an actor’s performance of such a passage, as in, “Did you see Trevor Nunn do Act IV of ‘King Lear’? That was some shtick!” It can be a hammed up or overly theatrical performance, as in, “Instead of playing the character, he just went onstage and did a shtick.”

A shtick can also be any routine or repeated way of doing things, as in, “By now I know that shtick of theirs by heart.” It can be a trick played on someone, as in, “Don’t ever try that shtick on me again.” It can be something one likes or dislikes doing, as in, “Ballroom dancing is not my shtick.” But it cannot be — or so I would have thought — the gripes that people have about something, as in, “What is the shtick out there?”

I would have thought — and been wrong. Consulting my 1999 Encarta World English Dictionary, I found the following: “Shtik n. 1. Entertainer’s routine a comedian or entertainer’s act, routine, or gimmick 2. Special attribute of somebody something, e.g. an interest, talent, trait, job, or hobby, that especially characterizes somebody 3. Exaggeration an exaggerated complaint or extreme position.”

Definition 3, of course, is exactly how Biden was using the word. It wasn’t his knowledge that was deficient, it was mine. As far back as the 1990s, it turns out, if not earlier (even a slang word has to have a history of at least several years before making it into a dictionary), “shtick” had acquired a new meaning in American English of which I wasn’t aware.

One might attribute this to my living in Israel. I doubt, though, that that’s the entire explanation. To it needs to be added that while I speak American English with Americans all the time, those with whom I speak are mostly Jews — and the extension of “shtick” to mean “exaggerated complaint” did not take place,” I suspect, under Jewish influence. Although it’s easy enough to see how it must have developed (one of the older meanings of “shtick” is something done in an exaggerated or burlesqued way), my instinct tells me that it didn’t do so among Jews for whom the word “shtick” had clear and familiar parameters. Only non-Jews who did not grow up with “shtick” could have redefined it in such a way.

Should we be proud that one of our words has been such a success in America that it has acquired an independent life of its own, having nothing to do with us? Or should we be sad that it has slipped from our grasp and no longer belongs to us as it once did? I guess the only answer is, both. It’s not really very different from the problem of assimilation in general, since many of us react similarly when Jews attain prominence in American life — as politicians, as entertainers, as athletes, as scientists or whatever — while leaving the Jewish community behind them. We’re flattered and chagrined at one and the same time. “Shtick” has assimilated into American society and intermarried, as it were, with a non-Jewish meaning. I wouldn’t sit shiva for it, but I can’t say I don’t feel a twinge of loss.