What He Contributed, What He Endured 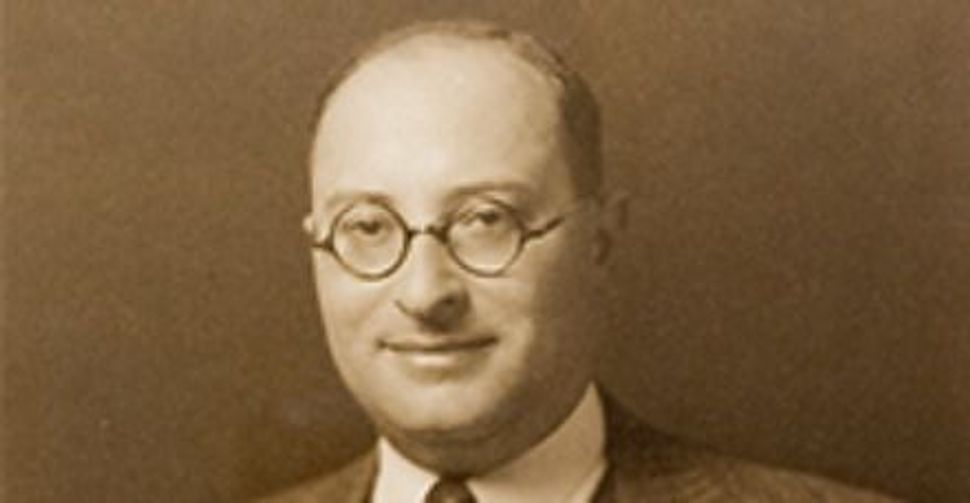 Happier Times: Jean Zay, French minister of arts and education from 1938 to 1939. Image by courtesy of the french national archive

Valiant Spouse: Jean Zay and his wife Madeleine, who smuggled his memoir out of prison, and would later fight heroically to bring her husband?s murderers to justice after the war, visiting a 1938 photography exhibit in Paris. Image by Getty Images

On May 29, at the Théâtre d’Orléans, a gala concert, Hommage à Jean Zay, paid tribute to a minister of education and fine arts in the 1930s government of French-Jewish socialist Léon Blum, whose lasting impact on French culture is being newly celebrated. Son of a left-wing Jewish newspaper editor in north-central France, Zay was born in 1904 and was tragically murdered in 1944 by la Milice, France’s Nazi collaborationist paramilitary force that flourished during the Vichy regime.

In only 39 crowded years, Zay was a cultural overachiever who ranged far beyond education to secure lasting cultural advancements. He co-launched France’s still-thriving National Center for Scientific Research (Centre National de la Recherche Scientifique) and was one of the co-founders of the Cannes Film Festival, which was set up in 1939 as an alternative to the Venice Film Festival, dominated by Mussolini-era fascists.

The audience in Orléans applauded “July 14,” a 1936 work commissioned by Zay to celebrate France’s national holiday under Blum’s Popular Front government. “July 14” called upon seven leading composers, including Darius Milhaud and Daniel Lazarus, to express their feelings about France. Philippe Ferro, the conductor at the May gala, asked three composers of today, Henri Dutilleux, Michaël Levinas and Tôn-Thất Tiết, to contribute new settings of poetry for baritone and wind ensemble as a further tribute to Zay. Accompanying the concert, the theater housed an exhibit, “Jean Zay and Music,” to complement this year’s reprint of Zay’s moving wartime prison diary, “Memories and Solitude” (“Souvenirs et Solitude”) by Les Éditions Belin.

This essential text, originally edited by Zay’s former chief of staff, Marcel Abraham, and published in 1946, has never been translated into English, surprisingly enough, despite its status as a uniquely insightful look at history and culture. Zay, who was arrested and imprisoned in 1940 on trumped-up charges, was for a time accorded writing paper and family visits, allowing his diary to be gradually smuggled out of prison by his wife, Madeleine.

“Memories and Solitude” is a brilliant meditation, deeply imbued with culture in all its forms. As a prisoner under a cruelly unjust regime, Zay clearly indentifies with Captain Alfred Dreyfus, especially when an unfounded rumor is circulated in 1940 that Zay would soon be transferred to a jail on Devil’s Island off the coast of French Guiana, where Dreyfus was imprisoned in 1895. A year later, Zay jots down approvingly a description by Anatole France of Major Georges Picquart, a Dreyfus supporter who himself was jailed for daring to defend the Jewish soldier: “[Picquart’s] persecutors could not divest him of his priceless inner freedom; in the prison where they immured him, he was freer than they were.”

Along with Dreyfus, Zay identifies with Daniel Defoe’s Robinson Crusoe — almost considered as a Gallic fictional character since a famous 19th-century translation into French by poet Petrus Borel. Whether rationing his meager food rations like someone “shipwrecked,” or describing the “desert island” aspect of prison, where inmates create makeshift tools and utensils, Zay notes: “One must come to prison to really understand Robinson Crusoe.”

Completely nonfictional, by contrast, are Zay’s accounts of historical events during his imprisonment, such as the arrest of the French-Jewish aircraft industrialist Marcel Dassault (born Marcel Bloch), who was freed by his Vichy captors for reasons of illness, only to be immediately rearrested “as soon as he reached the sidewalk” outside the prison. Zay observes that this method of administratively toying with a prisoner “recalls one of the cruelest” of the “Cruel Tales” (“Contes Cruels”) by 19th-century author Villiers de l’Isle-Adam. Titled “Torture by Hope” (“La Torture par l’Espérance”), the emotional aura of Villiers de l’Isle-Adam’s tale rings savagely true in the context of a sadistic regime. Equally perverse are incidents such as a 1943 trial at which an arsonist, Jacques Longuet, who burned down the Casino of Royat, outside Clermont-Ferrand, escapes serious punishment by telling the court that he thought the casino “was owned by a Jew.”

The imperiled status of Jews during the German Occupation is an underlying theme on every page of Zay’s diary. On hearing of the 1941 death of the French-Jewish philosopher Henri Bergson, Zay recalls a 1939 visit with the eminent octogenarian thinker, who asked Zay’s opinions on what Hitler and Mussolini might be planning, before over-optimistically informing Zay, with a smile, “You’ll see; all this will wind up very philosophically.” Zay underlines how Bergson, although estranged from Judaism, wrote in a 1937 last will and testament that he refused to convert, having observed “for years a formidable wave of anti-Semitism about to break upon the world. I wished to remain among those who would be tomorrow’s victims of persecution.”

“Memories and Solitude” displays an amazing degree of literary panache and verve, explaining how Zay, while imprisoned, wrote and published a detective novel in 1942. Titled “Ring Without a Finger” (“La Bague Sans Doigt”), the adventure tale recounts how an innocent man charged with murder and theft manages a series of escapes from both police and a criminal gang. Published under the pen name of Paul Duparc, “Ring Without a Finger” is described by Zay as a way to “kill time… entirely harmless, modish work which nonetheless provided me with many hours of distraction. No diversion during hours of boredom can equal pure creation, however modest it may be.” Unfortunately, the secret of Zay’s authorship leaked out, and the conditions in his penitentiary, Riom Prison in the Puy-de-Dôme department in Auvergne, central France, became harsher on orders of the Vichy government. As Zay notes, “The Vichy police drew unforeseen conclusions from [the novels’ publication]; anyone who writes detective novels is capable of escape.”

As it happens, Zay never tried any putative prison break, out of concern for reprisals against his wife and two young daughters. So his fate, to be slain like the French-Jewish politician Georges Mandel, would be sealed. Fortunately, “Memories and Solitude” remains, and its editor, French historian Antoine Prost, argues that it was intended by Zay to be published as his own version of historical facts and experiences. A more private side of Zay will doubtless be revealed by a future publication, announced by Belin without a firm date so far, of Zay’s collected private writings, including letters to his wife, family and friends, as well as intimate jottings.

Together these publications will doubtless justify Léon Blum’s emotional 1947 speech at the Sorbonne in Paris, which noted how Zay contrived to garden even in a minuscule jail yard: “Jean Zay managed to obtain pink radishes, tomatoes, and flowers from a tiny gravel path in prison.” Blum concludes: “Jean Zay will live on, through his identity, workmanship, and martyrdom. The French people will remember what he was, what he accomplished while still so young, what he contributed, and what he endured.”

Watch Zay’s daughter Hélène Mouchard-Zay in Orléans on January 27, giving a tour to Holocaust survivors Simone Veil and Serge Klarsfeld, among others, of a new museum, Le Musée-Mémorial des Enfants du Vel’ d’Hiv, commemorating the deportation of Jewish children from the Loiret department in north-central France (Mouchard-Zay currently serves as president of the Research and Study Center on the Internment Camps of the Loiret Department (Le Centre d’Étude et de Recherche sur les Camps d’Internement du Loiret), an association based in Orléans.

What He Contributed, What He Endured