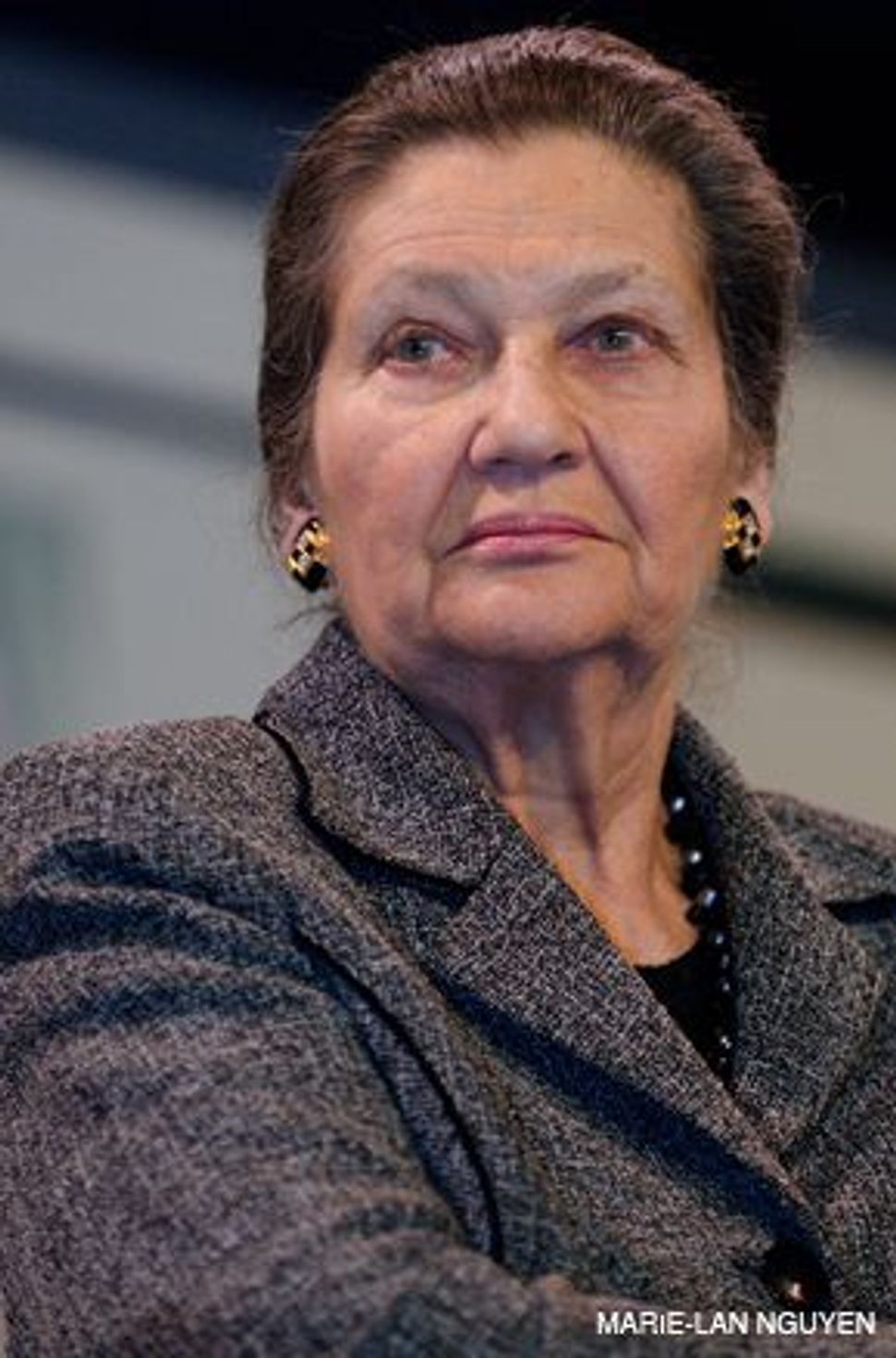 GRETA GARBO MEETS ELIE WIESEL: Simone Veil?s beauty helped her survive the Holocaust: her frankness, resolve, and ability made her a political success in postwar France.

On November 20, when the French-Jewish politician Simone Veil (pronounced Vay), 81, was elected to the prestigious Académie Française, her family took the news with typical self-deflating humor. Her husband, Antoine, exclaimed: “First she’s in the Grévin wax museum and now the French Academy. I hope all this isn’t leading to the Panthéon!” Veil, known for her sense of humor, could only smile. She herself once ironically claimed, “Nothing is more boring than a campaign caucus; one day, I fell asleep during my own speech.” Her lack of pretension is particularly disarming, considering the trajectory of her career. President of the European Parliament from 1979 to 1982, and a member of France’s Constitutional Council from 1998 to 2007, she gained fame in 1974 as minister of health, when she battled to pass a law legalizing abortion in limited cases: a fight so bitterly contested that even now, a couple dozen straggling protesters weakly picketed the French Academy’s headquarters after Veil’s election. 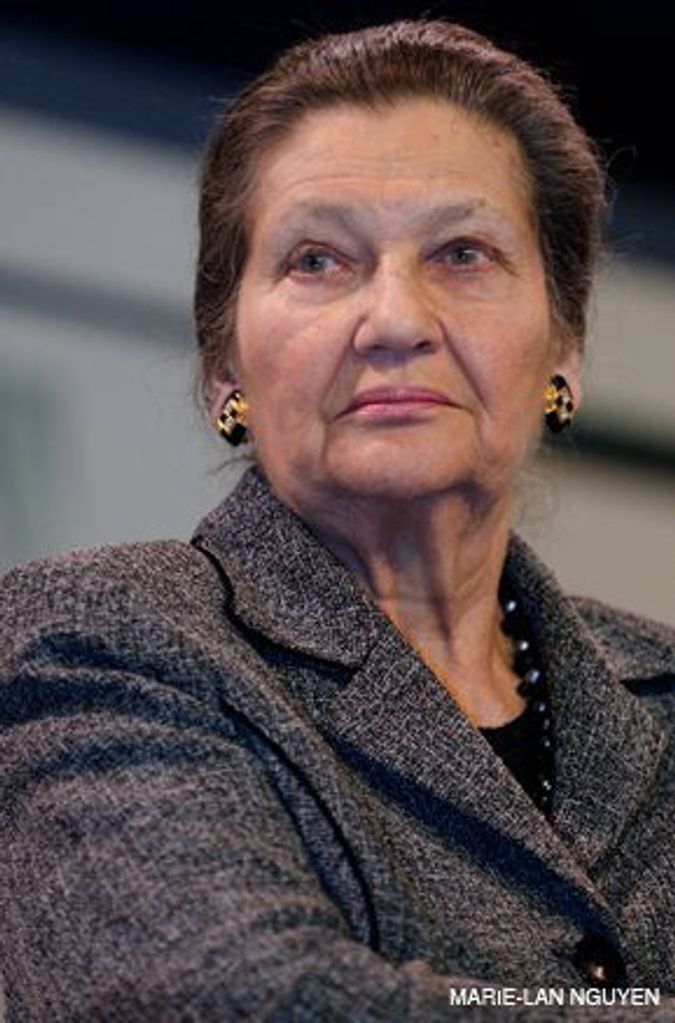 GRETA GARBO MEETS ELIE WIESEL: Simone Veil?s beauty helped her survive the Holocaust: her frankness, resolve, and ability made her a political success in postwar France.

Back in 1974, the debate was far more violent; protesters spat on Veil in the street and scrawled swastikas on her apartment building. This latter assault was particularly vicious, as in 1944, a 16-year-old Veil and her entire family, who all resided in Nice, were deported to a series of Nazi concentration camps. Her father, brother and mother would die as a result. Veil’s memoir, “Une Vie” (“A Life”) (Editions Stock, 2007), sold more than half-a-million copies in France and is due for English publication in February 2009. The memoir is one of only three books that Veil has had time to write in a life of bustling public and family activity. Yet, “Une Vie” is an extremely telling and sometimes stunningly moving narrative, especially when the author describes her mother, Yvonne, who “radiated a glowing beauty which reminded many people of the star of the day, Greta Garbo.” This is not mere nostalgic reminiscence. Old family photos show Veil’s mother to be strikingly alluring, and even in old age, Veil and her surviving sister retain an inherited statuesque loveliness. Veil’s physical charm, which no doubt is what later helped her win a measure of political popularity in France, also contributed to her survival in Auschwitz, where she arrived in April 1944, along with her mother and sister.

Veil recounts how a guard named Stenia, a Polish ex-prostitute, was “terribly brutal” to other deportees but protected the young Simone, telling her, “You are really too pretty to die here.” In a harrowing passage recounting her mother’s death from typhus, Veil concludes: “Even today, over 60 years later, I realize that I have never been able to resign myself to her death. In a certain way, I have not accepted it. Every day, Mom is close to me, and I know that whatever I have managed to accomplish in my lifetime is due to her.”

These accomplishments were achieved despite a generalized postwar French amnesia about the worst aspects of the German Occupation during World War II, along with antisemitic insults that continued into recent memory. In 1989, the famous French film director Claude Autant-Lara (1901–2000), who had been elected to the European Parliament as a member of the far-right-wing National Front, pooh-poohed the Holocaust by stating mockingly to a magazine reporter, “When I hear about genocide, in any case they missed old mother Veil.” A scandal ensued, but as a minister, Veil was often obliged to work in the government with notorious antisemites. In 1980, after a Paris synagogue on the Rue Copernic was bombed, Raymond Barre, a political colleague, deplored the fact that not just Jews but also “innocent French people” were killed in the terrorist attack.

Veil admits with typical understatement that she felt “no pleasure” that France’s delegation to the European Parliament included press magnate Robert Hersant (1920–1996), popularly nicknamed “Herr Sant” because of his notorious wartime collaboration with the Nazis. Veil is renowned for speaking her mind about political enemies, and even about such allies as President Nicolas Sarkozy. This past February, in response to Sarkozy’s impulsively stated plan to have each French grade-school child “adopt” a young Holocaust victim who died at the schoolchild’s age, Veil stated her opposition loudly and clearly. As president of France’s Foundation for the Memory of the Shoah, she made Sarkozy’s project disappear by calling it “unimaginable, indefensible, catastrophic, and above all, unfair. We cannot inflict this on little 10-year-olds! We cannot ask a child to identify with another dead child.” She added that even Holocaust survivors found it difficult to describe their sufferings to others: “Even today, we try to spare our children and grandchildren.”

In a 2005 documentary, “Simone Veil, une Histoire Française” (“Simone Veil, a French Story”), filmed for France 3 TV, her son, Nicolas, explains that, although she avoids speaking of it, everyone close to his mother is fully aware of this great woman’s rare heroism: “Fear is not in her registry of emotions,” he states. Asked whether he and his wife were ever apprehensive during the 1970s, when there were violent protests before abortion was legalized in France, Antoine confirmed, “Since 1945, we have never felt fear.”