Jews Swim Like Fish: Gold and Silver for U.S. and an Israeli First 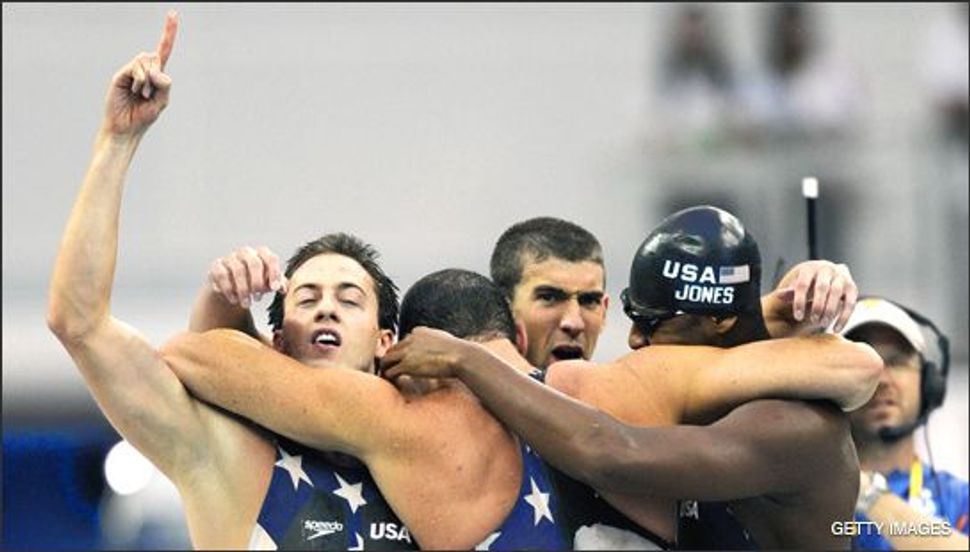 Jews are making waves at Beijing’s Water Cube these days.

Jewish swimmers Jason Lezak and Garrett Weber-Gale were half of the U.S. 4×100-meter freestyle men’s relay team that won the gold today, smashing records along the way.

“I knew I was going to have to swim out of my mind,” [said]( (http://www.nytimes.com/slideshow/2008/08/11/sports/0811-SWIMMINGRELAY_3.html ‘said’) anchor Lezak, who wrapped up the race for Team U.S.A. with what one sportswriter called “arguably the greatest swim in American history.”

Dara Torres helped the US women’s team relay to silver. At 41, Torres is the oldest swimmer of either gender to ever win an Olympic medal.

Torres and Lezak, 32, are the two oldest swimmers in their respective genders for the U.S. this Olympics.

Torres’s father is Jewish, and she converted to Judaism before marrying an Israeli surgeon.

Israel is also swimming into the record books. Nimrod Shapira-Bar Or splashed into first place in the the 200-meter freestyle qualifying match, becoming the first Israeli swimmer to advance to the semi-finals.

“I’m more than happy. I wanted to prove to everyone that I was not sent here for nothing,” said Shapira Bar-Or, who was the last to join the Israeli team.

Guy Barnea also set a new Israeli record while getting wet in the National Aquatic Center, advancing to the semi-finals in the 100-meter backstroke category, and got a congratulatory “yashar koach” phone call from Shimon Peres for his achievement.

Jews Swim Like Fish: Gold and Silver for U.S. and an Israeli First