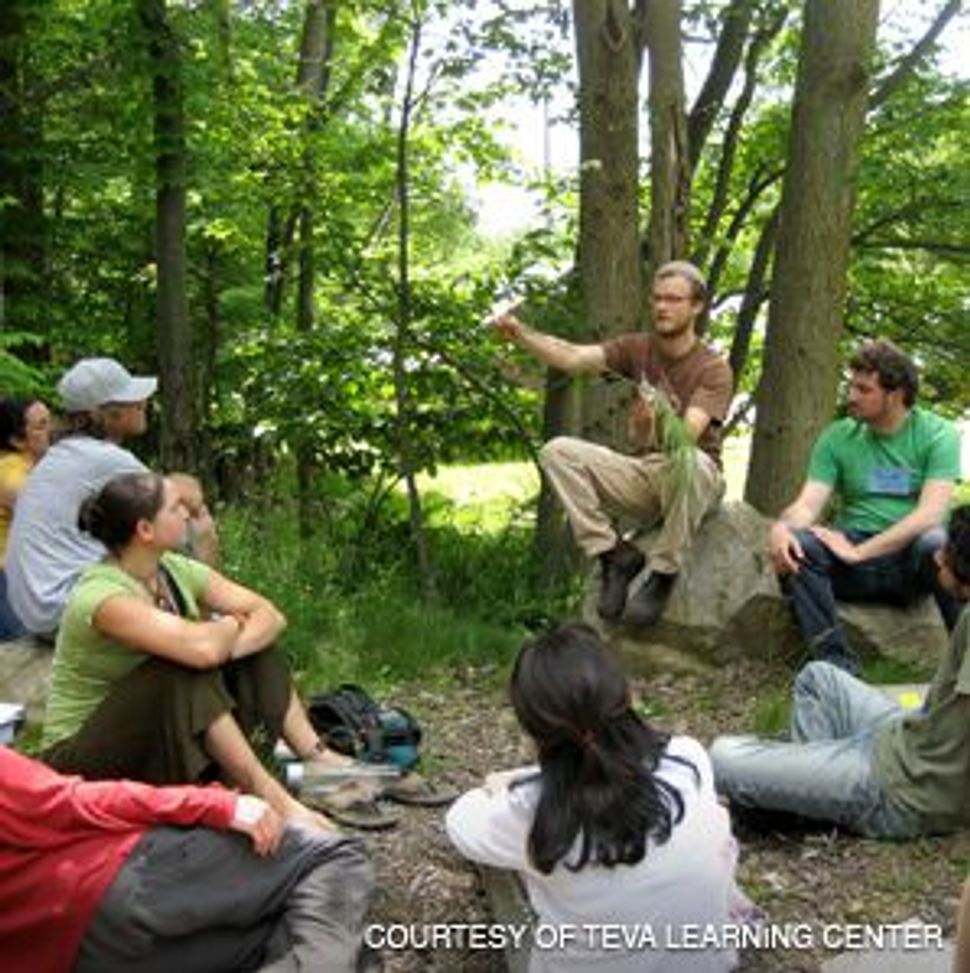 LAND-BASED: A teacher offers an enviornmental lesson, outside the traditional classroom setting

The Jewish Farm School is a new organization that hopes to bring Jews back to their agricultural roots by giving them a taste of what it means to grow their own food and reconnect with the soil. 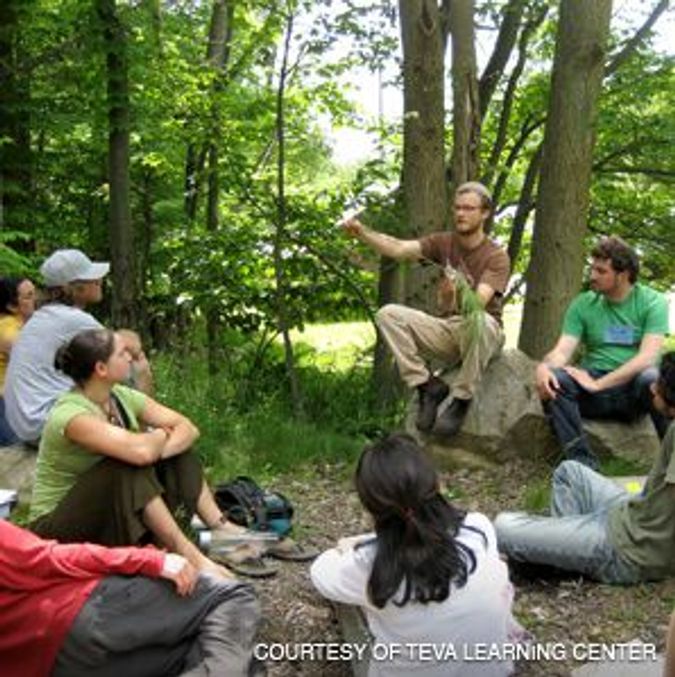 LAND-BASED: A teacher offers an enviornmental lesson, outside the traditional classroom setting

“We’re missing the people’s deep connection to the land and not engaging in the process of creating the food we eat,” said Simcha Schwartz, one of the JFS’s co-founders and co-directors.

The group aims to add the practice of “sustainability” to the lives of college students and adults by teaching these people to compost, recycle, raise chickens and do other small environmental tasks. Sustainable farming is commonly defined as agricultural systems meant to last forever.

The JFS was started in Phil-adelphia in 2006 when “a group of likeminded individuals and friends came together to create a full-time job and lifestyle for themselves,” Schwartz said.

They wanted to be able to practice and promote sustainable agriculture in a Jewish way. Most of the dozen or so of those involved had already participated in other Jewish programs, such as Adamah: The Jewish Environmental Fellowship, a three month leadership-training program in Jewish farming, and in the Teva Learning Center, a Jewish environmental education institute.

Nili Simhai, Teva’s director, noted that Teva provided the first opportunities for many members of the JFS to do programming, and it was those activities that gave the founders the idea for the Jewish Farm School.

Although some may find it strange to mix agriculture with Judaism, Schwartz said that the historic connections are there.

“The Torah was based in an agricultural society built upon farmers. But now, Jews are mostly urban, so we take those teachings and bring them into the lives of doctors, lawyers, teachers, anybody. For example, Shmita [the year of rest that occurs every seven years in Jewish agricultural tradition] is this year. How do we incorporate this into our lives?”

JFS’s first program, developed in partnership with Teva, was a series of seminars on organic agriculture and educational gardening, presented at a weeklong Jewish Environmental Education seminar in Cold Spring, N.Y. It was such a success that the JFS has been invited back to lead the program each year since.

According to Hazon’s founder, Nigel Savage: “Right now, both the American people and the Jewish people are reassessing their relationship to the planet, the land and food.… The JFS is a group we think is doing important work, and we want to support them as much as we can.”

The JFS continued to expand in 2007, creating a 10-member council to help the directors with grant writing, budgets and other tasks. The organization also developed its programs by giving workshops and lectures on environmental issues and helping to set up sustainable farms at summer camps, campus Hillels, synagogues and Jewish community centers.

Additionally, each October in Philadelphia, the JFS runs an Urban Sustainability series, highlighting the environmental potential of urban life. The program emphasizes the city’s green efforts in transportation, food and agriculture.

This past spring, Hillel contacted the JFS, and the two groups worked together to create alternative summer breaks for college students on both the East and West Coasts.

Abbey Greenberg, Hillel International’s assistant director of alternative breaks, said the trip came about because Hillel had funds earmarked for food education. Together, the groups planned a weeklong trip for 10 students at Kayam Farm & Environmental Education Center in Reisterstown, Md., and for another 10 students at Oz Farm, a retreat center and camp in Point Arena, Calif.

Kayam participant Moshe Cohen, a graduate student at Louisiana State University, heard about the program after joining Hillel International’s Sustainability Committee. He said that, each day, participants composted, planted and performed other duties, such as building a fence around the farm to keep out deer. In the relaxed atmosphere, Cohen said, he had many deep conversations with fellow participants, as well as “the incredible opportunity to get to know the earth.”

In addition to the physical work, participants had Jewish learning sessions in which they studied such subjects as talmudic agricultural laws.

“It was, ‘This is what is says in the Torah; now let’s go do it!’” said Jakir Manela, Kayam’s farm director. “We rediscovered the muscle memory of Jewish learning.”

“It was amazing to help the farm continue to exist,” said Greenberg, who also attended the Kayam trip.

She added that although the program is still in development, interest for next year is very high.

In the coming year, Schwartz says, the JFS plans to start fundraising and looking for land for its future endeavors.

JFS co-founder and co-director Nati Passow explained, “The initial vision was to start a rural site, but I became involved in the Philly urban agriculture scene after gardening at an urban school.”

In the fall, he says, the JFS plans to secure a vacant lot to farm plants such as clover in order to build the soil’s nutrition. Eventually, the organization hopes to farm food in the spring to either sell at farmer’s markets or donate to food banks.

Currently there are plans to create two sites — an urban farming site in Philadelphia, and another, a few hours away at an undetermined site in rural Pennsylvania. Schwartz said that eventually he would like to build a rural school for 11th and 12th graders that would give teenagers the opportunity to get credit for agricultural learning.

He offered an explanation for the JFS’s growing popularity: “For hundreds of years, Jews couldn’t own land, and our Jewish agricultural traditions and techniques were lost. Now, it is a privilege to come back to the land, and many Jews are seeking a land-based experience.”