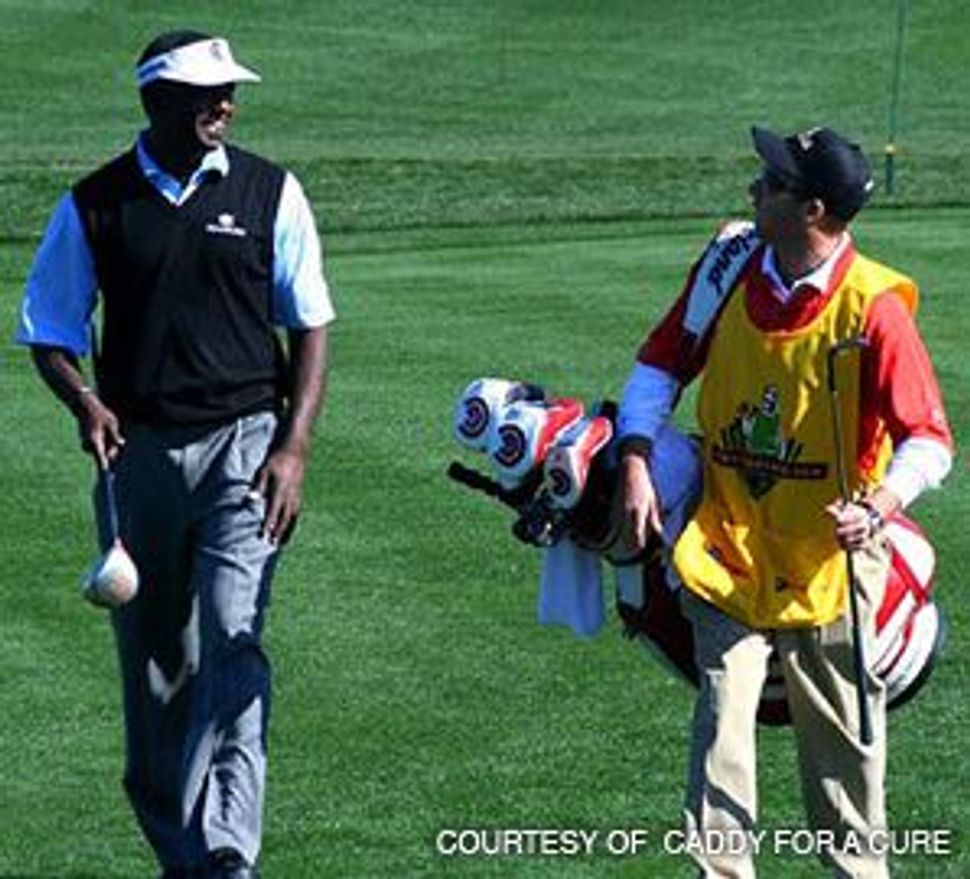 DREAM COME TRUE: Michael Brown (right) got the chance to caddy for golfer Vijay Singh after winning an auction on caddyforacure.com.

Last March, after placing a successful bid on the Web site caddyforacure.com, golf lover Jon Huzarsky, a senior vice president of a Manhattan investment bank, was able to spend a day caddying for professional golfer Steve Stricker at the World Golf Championships. The caddying opportunity, which Huzarsky heard about from a friend, was “by far, the greatest golf experience of my life.” 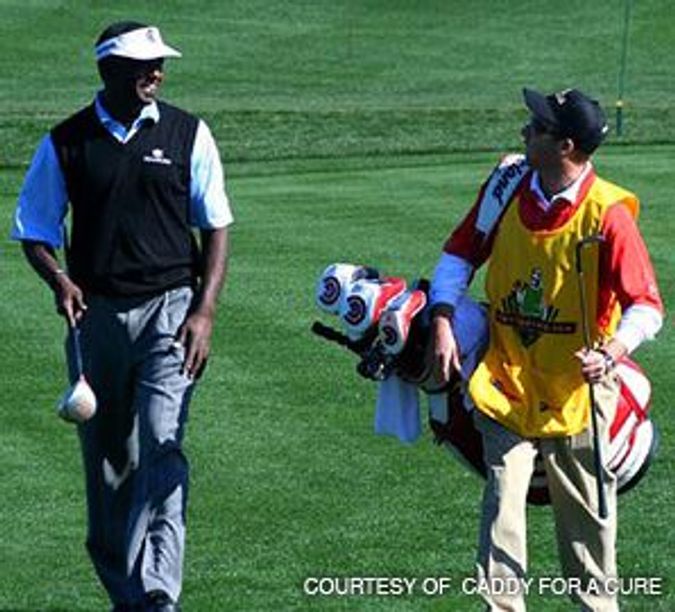 DREAM COME TRUE: Michael Brown (right) got the chance to caddy for golfer Vijay Singh after winning an auction on caddyforacure.com.

The Web site, founded by longtime caddy Russ Holden, uses eBay to auction off the chance for people to spend a day caddying for golfers on the PGA tour. Successful bidders get the chance to do everything a player’s fulltime caddy does during either a tournament or practice. What makes the organization unique, though, is that all the money generated by the auction goes to charity, with 20% going to the Fanconi Anemia Research Fund.

Fanconi Anemia is an inherited disease that leads to bone marrow failure and can affect all systems of the body. Many patients develop leukemia and other cancers at young ages. A child has a 25% chance of being born with the disease if both parents carry a defective gene. There are 13 genes that cause FA, which occurs with higher frequency among Ashkenazic Jews, and at a rate of one in 32,000 in the total Jewish population.

The site was created by Holden, who once aspired to be a professional golfer, in honor of a friend’s son, who 14 years ago was diagnosed with FA. “His diagnosis impacted me a great deal,” Holden said. “This wasn’t a friend of a friend, this was family.”

Some years later, Holden had the opportunity to caddy for German golfer Bernhard Langer when his former caddy got sick. After seeing audience members jealously watch him, Holden had an epiphany: “People would pay a lot of money to do something like this.”

With his friend’s son in mind, Holden approached the PGA tour, and five years ago, he founded Caddy for a Cure. The Fanconi Anemia Research Fund is one of five charities that receive 100% of the money generated by auctioning off caddying experiences to players who cooperate with the charity.

Huzarsky, who says he has done a lot of work with other charities, spoke of Holden in glowing terms. “He takes the money and puts it to real use,” Huzarsky said. “There is a tangible connection between the money and the children.”

In the five years since Caddy for a Cure was created, more than 100 people have helped the charity raise more than a quarter of a million dollars by caddying.

In addition to carrying a player’s bag, caddies select clubs to be used based on the wind and elevation of the course, and in other ways assist the player.

“Caddies are a key tool for a professional golfer,” Holden said. “At Caddy for a Cure, people don’t just get to meet the players, they get to work with them for a day.”

Michael Brown, who caddied for Vijay Singh during a practice last February, said that caddying “is actually very hard work,” especially since Singh is known as having the heaviest golf bag on the PGA tour. Nonetheless, Brown relished the chance to speak with a golf star about his experiences on the tour.

Depending on the venue and player involved, caddying opportunities have sold for anywhere from $2,000 to $27,500, although Holden said they typically cost between $5,000 and $10,000. This year, there will be about 20 caddying events.

Since all the money received from the caddies is donated, the organization must look elsewhere in securing administrative funds.

In the past year, Holden gave up caddying to work full time on Caddy for a Cure and assembled a board whose job it is to oversee, promote and fundraise for the charity. The board’s president, Peter Weitz, got involved after reading in a Florida newspaper about the friendly man he chatted with most mornings at Einstein’s bagel place.

In addition to staging golf tournaments and raffles in order to raise money for administrative costs, the board has found sponsors, such as clothing companies.

As for the world’s most famous golfer, Tiger Woods, Holden said that despite the star’s current injury, he is expected to cooperate with the charity soon.

In the meantime, Weitz said, Caddy for a Cure will continue to do what it has done for five years: “Raise money for a disease most people haven’t heard of, and also manage to give people an amazing experience.”