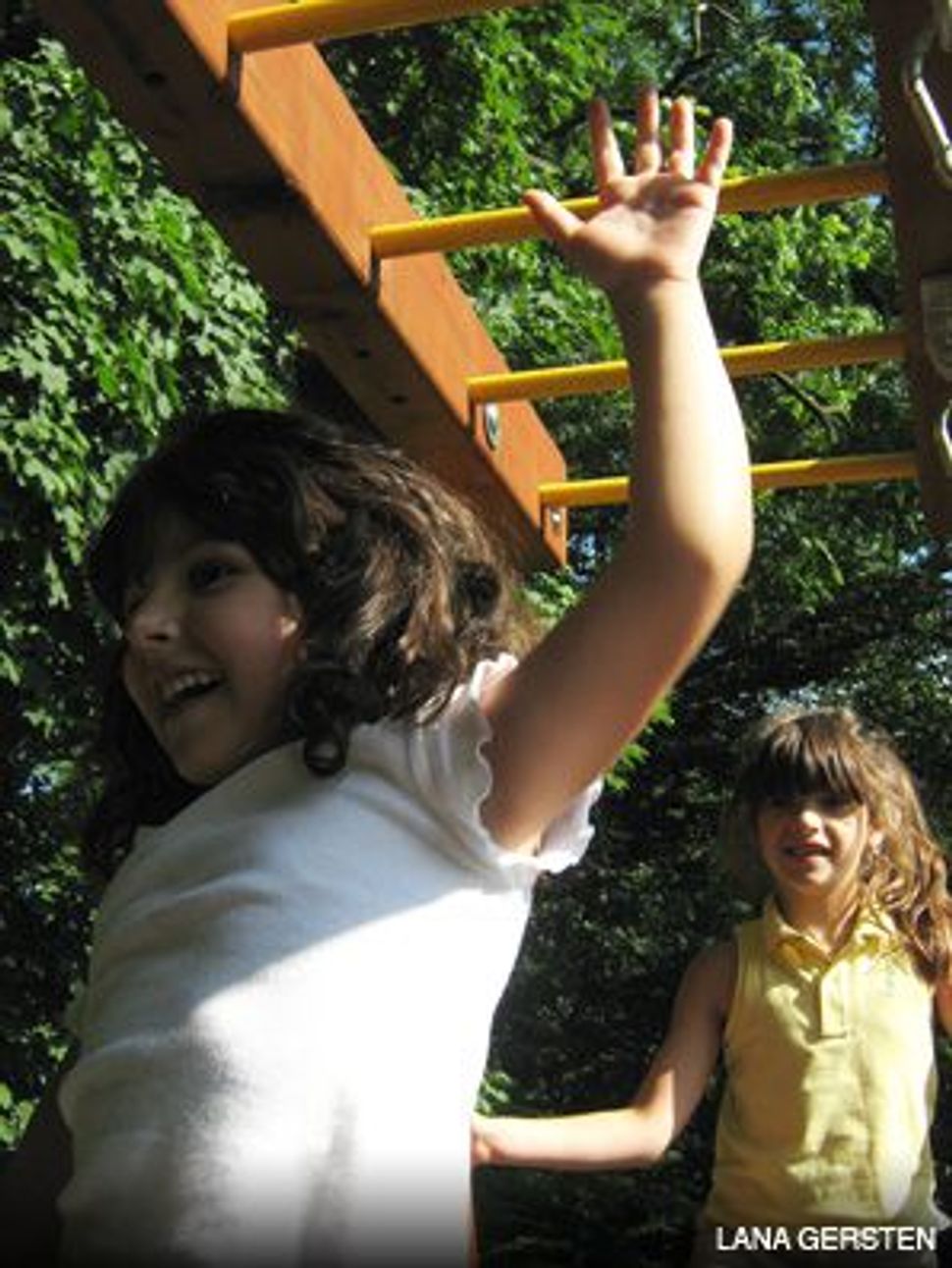 CHIN UP! Sisters Hanna (foreground) and Carly White (back) were diagnosed with Canavan disease, but their relatively mild form of it has given researchers fresh hope in their search for a cure.

When Carly White was an infant, her parents, Jim and Dolores, noticed that she had trouble controlling the movement of her eyes. Three years later, a ballet teacher observed that Carly did not have much control over her legs. Trips to the pediatrician yielded no answers, but a visit to a neurologist ended in a diagnosis of low muscle tone, a condition that often results in delayed motor skills and trouble with coordination. 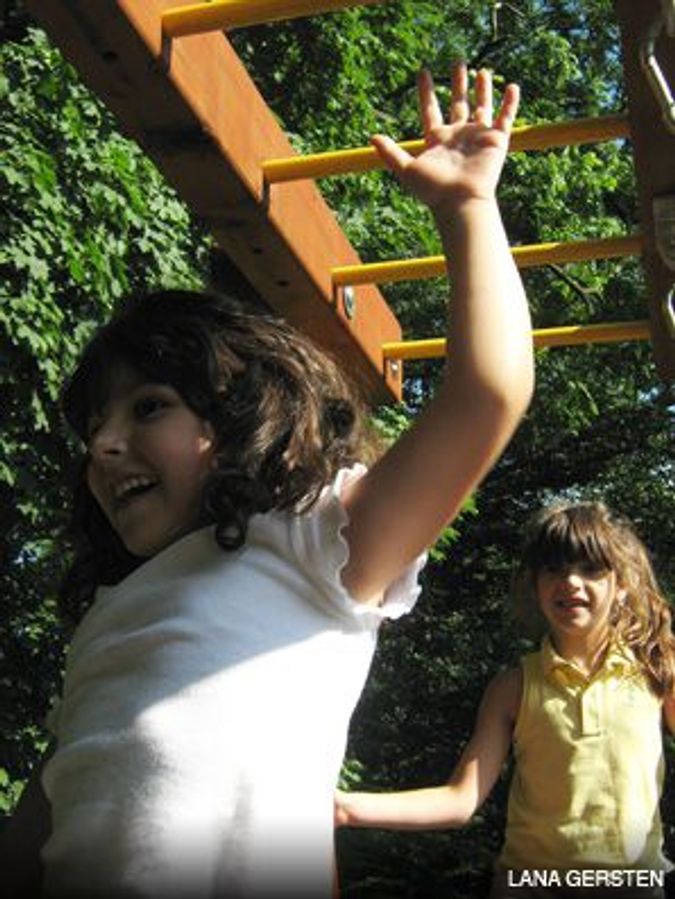 CHIN UP! Sisters Hanna (foreground) and Carly White (back) were diagnosed with Canavan disease, but their relatively mild form of it has given researchers fresh hope in their search for a cure.

Before long, Carly’s younger sister, Hanna, followed suit. At an age when babies typically begin crawling, Hanna was only able to roll on the ground. Though both girls had difficulty following directions and processing information and had minor physical delays, their language skills and behavior were age appropriate. Even so, the Whites knew something wasn’t right.

So in November 2004, 3-year-old Carly and 1-year-old Hanna underwent a battery of tests, including skin biopsies and MRIs. Both girls’ urine samples came back with elevated levels of N-acetylaspartic acid (NAA), which is predominantly found in nerve cells in the brain. This indicated that both girls had Canavan disease, a rare and fatal degenerative brain disorder. At first, doctors did not believe the results.

Canavan disease is caused by a deficiency of an enzyme called aspartoacylase, which leads to an increased level of NAA, a substance upon which this enzyme acts. The abnormally high levels of NAA lead to loss of the insulation (demyelination) that normally surrounds nerve cells, and the result is spongy degeneration of the brain.

Typical patients suffering from this disease face a number of debilitating symptoms, including rapidly increasing head circumference, lack of head control, reduced visual responsiveness and abnormal muscle tone, such as stiffness or floppiness. The disease is usually diagnosed in infants between 3 and 9 months old, and though symptoms vary, many children with Canavan disease cannot crawl, walk, sit or talk, and may suffer from seizures, paralysis and mental retardation. Most children do not live past their 10th birthday.

“These two girls have an abnormality in their brain that should lead to a terminal disease,” explained Paola Leone, director of the Cell & Gene Therapy Center at the Robert Wood Johnson Medical School in New Jersey.

“It’s a puzzle to see them walking and talking.” Leone has dedicated the past 13 years to studying the disease.

About one in 40 Ashkenazic Jews is a carrier of the Canavan gene. Though the White family is not Jewish, Leone is optimistic that studying these girls could lead to a possible cure for them and for the more severe form of the disease that afflicts Ashkenazic Jews.

“The only difference is the location of the mutation in the gene,” explained Leone of the girls’ relatively mild case. “To understand how this… change in the enzyme affects development is understanding how to treat the disease.”

In February 2006, Leone and a team of doctors published their findings in Annals of Neurology. More recently, doctors have found a girl in Ecuador with the same mutation.

“This finding presents a possible cure for all mutations,” Leone said.

“We may be able to find better methods for treatment and better methods to stabilize the conditions, better methods to improve the quality of life, but even gene therapy isn’t a cure, it’s a way of stabilizing the disease,” said Kolodny, a co-author of the 2006 paper. A cure, he cautioned, is almost impossible to achieve with congenital mutations like those that lead to Canavan disease.

Kolodny’s research focuses on NAAG (N-Acetylaspartylglutamat), a neurotransmitter believed to remove water from nerve cells. In children with Canavan disease, NAA and NAAG levels are unusually high, but in the White children, both levels are lower.

Though cautious, Kolodny is still optimistic about what the new finding may yield.

“By comparing the chemistry of children with mild forms of a disease and a severe form of a disease and finding differences, you can get clues in what you might tackle in trying to repair the disease or make it less toxic to the nerve cells,” he said.

Other experts are more skeptical still.

Reuben Matalon, a professor of pediatrics at the University of Texas at Galveston, has spent six years performing experiments on mice with severe forms of Canavan disease. In his view, Carly and Hanna’s milder form will have no impact on research into the more severe form. The two are completely different, he said.

“Don’t get hung up on the mutation,” he said. “It’s a single mutation which we know is mild. It doesn’t mean that only that mutation is going to be mild. There are other mutations.” The only possible outcome, he said, is that if a treatment is found, it will most likely be more effective with the mild form.

All the same, Leone remains sanguine.

While there have been other patients diagnosed with milder forms of the disease, she said, their enzyme was not entirely deficient. The White girls are unique because they both have a completely deficient enzyme, which typically results in severe symptoms, yet they are able to function at a relatively normal level. For Leone, this is an encouraging sign.

These days, Jim and Dolores White continue to hope that doctors will make progress. Carly, now 7, will enter second grade this fall and will spend part of the day in special education classes and the other part in a regular second grade classroom, with the help of an aide. Hanna, 5, had her first seizure a year ago and continues to suffer mild seizures from time to time. Though she is very well behaved and social in her kindergarten classroom, her parents are waiting to see what develops.

“If my kids can help them find a cure, we’re happy to participate,” Jim said. “It’s a miserable disease, and that’s why we feel very lucky. Anything we can do to help.”