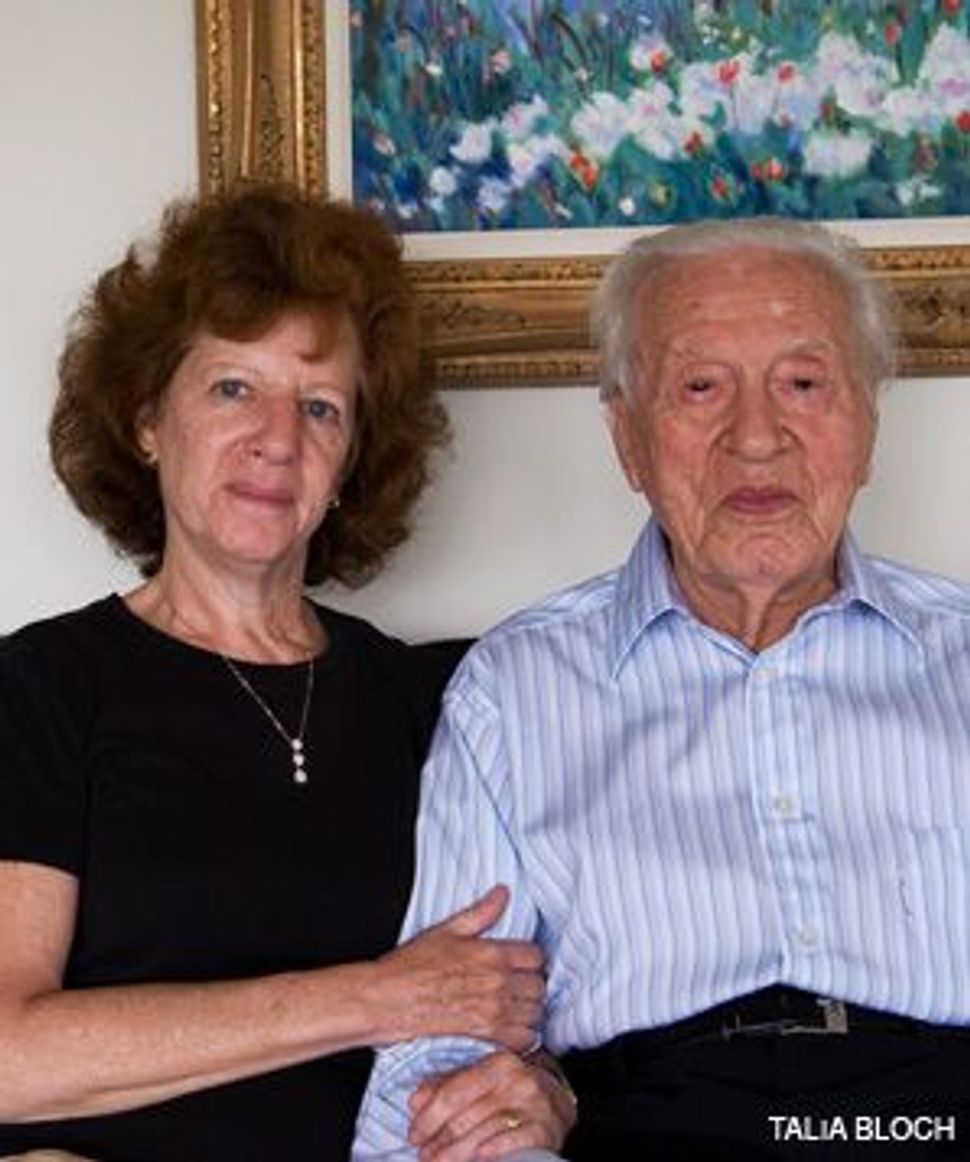 FAMILY TIES: Researchers are studying Jewish centenarians and their children ? including Fred Feuerstein, 100, and his daughter Linda Burghardt, 61 (above) ? in an effort to unlock the genetic secrets behind long life.

‘It’s important to be calm, not to get excited. It’s not good for the heart,” centenarian Fred Feuerberg said. “And I never ate much. I never overate.” 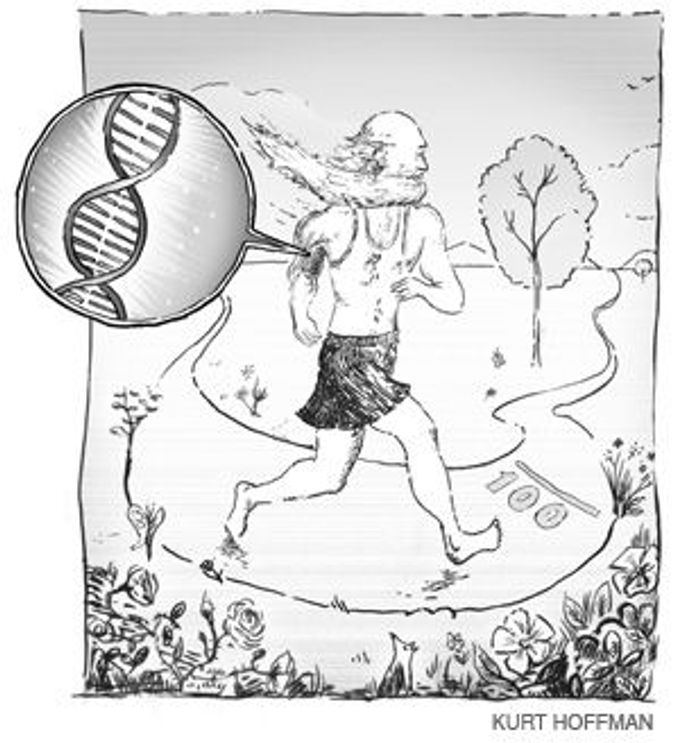 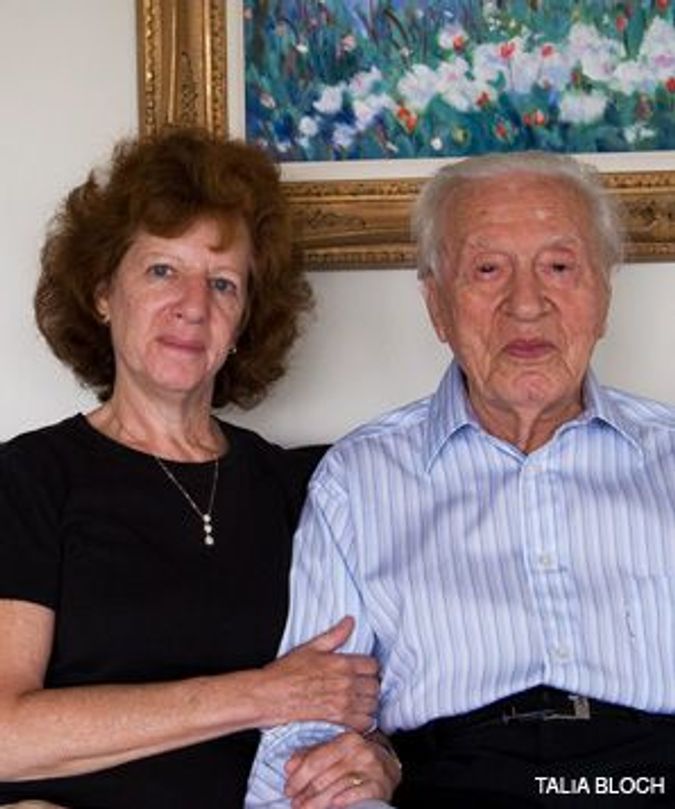 FAMILY TIES: Researchers are studying Jewish centenarians and their children ? including Fred Feuerstein, 100, and his daughter Linda Burghardt, 61 (above) ? in an effort to unlock the genetic secrets behind long life.

Feuerberg, who turned 100 in May, was sitting in his spacious apartment in Fort Lee, N.J., explaining what has allowed him to reach such a ripe old age in excellent health. What Feuerberg did not mention — though the information emerged later — is that he was once a smoker.

In an effort to uncover the genetic keys to a healthy, long life, researchers at Yeshiva University’s Albert Einstein College of Medicine have been studying Ashkenazic Jews who, like Feuerberg, have lived to be 95 or older. Much to their surprise, they have found that genes seem to have made all the difference.

According to Nir Barzilai, director of Einstein’s Institute for Aging Research and head of the study, which is called the Longenity and Longevity Genes Project, the centenarians examined have not led the sorts of lives that doctors generally recommend. “Among our centenarians we have no athletes, no vegetarians,” Barzilai said. Thirty percent of his subjects were overweight or obese in the 1950s, and close to 30% were smokers. “We have a woman who smoked two packs a day until the age of 91. She is now 105,” he said. “What I’m saying is that they didn’t do what we tell our patients to do.”

Instead, it turns out, these centenarians possess variants of one or of several genes that researchers believe protect the body against the harmful effects of aging. “I was hoping for something like this, but it was really striking,” said Barzilai, who is also a professor of medicine and molecular genetics.

In keeping with this genetic link, Feuerberg’s brother also lived a long life, dying at the age of 96. Seated around the kitchen table with her father, Feuerberg’s daughter, Linda Burghardt, pointed out that the fact that her father has lived so long may seem counterintuitive. “People think that if they have a cushy life, they’ll live longer,” she said. “But with him it was the opposite. He was hungry. He was alone. And he has lived long.” Feuerberg, who was born and raised in Vienna, Austria, had a difficult life early on. His father was mostly not in his life while Feuerberg was growing up; he was away fighting in World War I and died of gas poisoning shortly thereafter. As an adult, Feuerberg endured harrowing experiences in Nazi Europe before leaving everything behind in 1938 and fleeing to New York City with his new wife.

There are significant differences in how individuals age, explained Richard Lipton, a professor of neurology at Einstein. Lipton studies cognitive aging and dementia and is the program leader of the brain-aging component of the study. The first goal of the research, he said, was to understand the genetic factors as opposed to the environmental factors that promote successful aging. “The second goal is to identify the genetic mechanisms that may protect against age-related diseases, such as heart disease, stroke, diabetes and cancer, and the third and overarching goal is to promote long life and excellent quality of life.”

By studying such centenarians as Feuerberg, scientists hope to ultimately develop drugs or other interventions that mimic the protective effects of these genes and are able to be used in the general population to fight age-related diseases.

When scientists search for genes linked to a particular trait, they study populations that are relatively homogeneous genetically so as to more easily identify variations. Having been founded by only a few forebears, and genetically isolated for generations because of the historically low intermarriage rate, Ashkenazic Jews represent such a population. Similar genetic studies on longevity are being conducted among the Amish and the Mormons in the United States, and also in Iceland, and in Okinawa, Japan, according to the National Institute on Aging.

Individuals who are 95 or older comprise only one out of every 10,000 people in the United States, according to the latest census figures. The Longevity Project has more than 450 Ashkenazic Jewish centenarians participating. Researchers have also included the children of centenarians in their study so that they may follow them over the next decades to observe how long they live and how well they age.

Centenarians who sign up for the study must possess a couple of other characteristics: They have to be living independently and be in good physical and cognitive health when they sign on. While researchers will not disqualify an individual whose health declines afterward, Barzilai noted that “many of them, even at the age of 100, are busy, are happy. Life is good.”

Anybody who has ever met Adele Lerner would see what Barzilai means. At 101 she still lives in her own apartment in a Queens residence for the elderly and pursues her passion. Lerner, a painter, has created works depicting a century of life in New York City. These have earned her such a reputation that she was recently featured in The New York Times as a Jewish Grandma Moses. Lerner first took up painting at age 60, and she graduated with a Bachelor of Fine Arts at the age of 83. A petite woman whose eyes sparkle when she speaks, Lerner said she has always had a thirst for knowledge. Change for her was not something to be feared. Rather, she said: “I think it’s wonderful. I want to know everything I could before I go. I have done so from when I was a little girl to now.”

Lerner said she was excited by the opportunity that the Longevity Project afforded her to help others. Although she never felt that it was her genes keeping her alive, she said she was surprised by the most recent discovery that the gene variant for short stature in women is also linked to longevity. “You know, they always called me the shrimp,” she noted, smiling.

So far, researchers have located four genes that have variants protecting against age-related diseases. According to Barzilai, each gene variant protects against not one disease, but several. The gene variant associated with both short stature in women and long life in general is of a gene involved in insulin-growth factor (IGF-I), which regulates children’s growth and tissue growth in adults.

The most publicized and the most important gene located so far, however, is CETP. This gene helps to regulate cholesterol — both LDL, the so-called “bad cholesterol,” and HDL, the so-called “good cholesterol.” Researchers have found that many of the centenarians have extremely high levels of HDL and large overall particle sizes of both HDL and LDL. CETP is involved in regulating these cholesterol particles. At the same time, scientists have found that the life-prolonging variant of CETP preserves exceptional cognitive function and protects against dementia.

Although scientists have some understanding of the role the gene variants play in promoting a long and healthy life, they have yet to uncover the exact mechanisms by which these variants work.

Moreover, researchers unanimously stress that their findings should not be misinterpreted. “I think that it is important not to overplay it too much,” noted Clyde Schechter, an epidemiology and population health professor who is responsible for analyzing all the data in the study. “The vast majority of us still need to abide by all the mommy rules: Don’t smoke cigarettes; eat your vegetables; exercise,” Schechter said. “No one factor, whether behavioral, genetic or environmental, will guarantee a certain outcome on mortality.”

The interplay between environment and genetics is highly complex. To illustrate this, Schechter cited findings on muscles and exercise. Scientists have discovered that there are biochemical differences in the muscle fibers between those who exercise and those who don’t. What has not yet been untangled is whether exercise gives rise to this difference in muscle fiber or whether those who exercise have the particular muscle fiber to begin with, predisposing them toward enjoying exercise.

“Learning what genes help people stay alive is probably the beginning of the story, not the end of the story,” said Adrienne Asch, a bioethicist and director of The Center for Ethics at Yeshiva University. Asch, who is not part of the Longevity Project, noted that while such a study has an important contribution to make to the fields of aging, there were many factors, such as economics, lifestyle and social relationships, that play a key role in keeping people healthy and alive, and it would be hard for a study focusing solely on genetics to weigh the importance of all these factors.

Yet the study has given the children of centenarians a renewed perspective on their own lives. Lerner’s daughter, Harriet Kaufman 72, remarked that having a mother Lerner’s age who is still completely healthy “gives me the confidence that I have many years to live. It makes me feel young.” And Burghardt, 61, a freelance journalist who has written three books, said that she has been inspired to take up a second career. She is currently studying for a doctorate in information sciences. “I never would have attempted this at the age of 60 unless I had a father who lived to 100,” she said.

Going forward, Barzilai said, researchers will be focusing more on these children of centenarians to see how well they age and why. Under the umbrella of the Einstein Aging Study, the Longevity Project scientists are also taking the longevity genes they find among Ashkenazic Jews and investigating whether these genes play a similar role among the general and diverse population living in the Bronx. “One of the exciting discoveries,” Lipton said, “is that some of the genes that make a difference in Ashkenazi Jews also make a difference in the general population. The thing that I love about Ashkenazi Jewish genetics,” he concluded, “is that it’s a medical version of being a blessing onto the nations. I feel like by studying ourselves, we can discover things that are broadly helpful.”