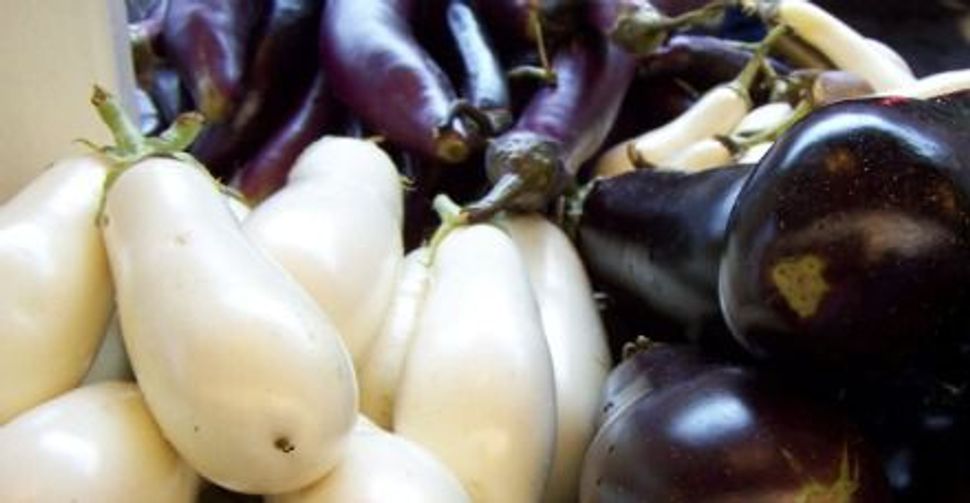 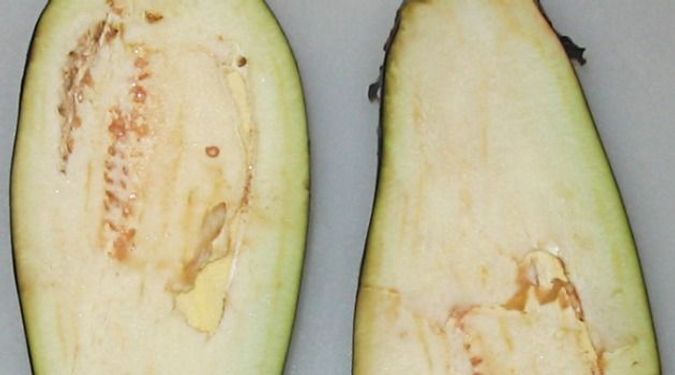 Jew?s Apple: Whatever you call it, eggplant is a delicious summer treat. Image by istock

Forward reader Mike Benn writes: “A distinct childhood memory of visits to my maternal grandmother’s home is of eating bronjenas. This was an eggplant dish made by grilling the eggplant over a naked flame and then scooping out the cooked contents. Recently, I’ve been wondering about the word.

“My grandmother was born in Palestine in 1900, the daughter of Chaim Ber Schwartz, one of the Romanian Jewish founders of the Rothschild colony of Zichron Ya’akov. However, my research shows that the eggplant dish I’m talking about is called patlagele vinete in Romanian, which sounds nothing like ‘bronjenas.’ In Yiddish, which was presumably my grandmother’s mother tongue, eggplant is patlejan — far removed from ‘bronjenas’ once again. In Polish (my maternal grandfather came from Poland), it’s oberzynowy — ditto. In Arabic, it’s betanjana — closer, but still not there. In Spanish, it’s berenjena, which looks very much like ‘bronjenas.’ Is this, then, its origin?”

In telling us about his family, Mr. Benn has modestly omitted mention of his grandmother’s elder brother, Re’uven Schwartz, who died in a Turkish prison in 1918 as a hero of the Nili, the Zichron Ya’akov-based espionage ring renowned in Zionist annals for its role in the British conquest of Palestine from the Turks in World War I. Who knows if, in his cell in Damascus, Re’uven did not dream of “bronjenas,” too!

In any case, although no longer called that in contemporary Hebrew, bronjenas, prepared by adding seasoning or a yogurt or tahini sauce to the smoky-flavored pulp of a grilled eggplant, are a popular dish in Israel, as they are elsewhere in the Mediterranean and the Balkans. And while the Ladino word bronjena (pronounced, as it was in old Spanish, with the “j” as in “jam”) indeed comes from Spanish berenjena (whose “j” has been, since the 16th century, a throaty “h” or “kh”), Romanian patlagele, Yiddish patlezhan, Polish oberzynowy and Arabic betanjana are different forms of the same word, too — as are Turkish patlican, Portuguese berengela, French aubergine, Italian melanzana and Greek melatsania.

The eggplant’s native home is India, and all these words go back to Sanskrit vatin-gama, which, according to the Encyclopedia of Jewish Food, meant the “anti-flatulence vegetable.” (Why we don’t eat eggplant with our beans, I don’t know.) The rest is all a matter of phonetic change. Via the Persians, vatin-gama reached the Arabs as betanjana — or, with the addition of the Arabic definite article, al-batanjana, which, its dental “t” transformed to an interdental “r,” produced old Spanish alberenjena, Catalan alberginia and aubergine.

Meanwhile, the “b” of berenjena was nasalized into an “m” in Greek and Italian, in which the tongued “r” turned into an “l” and the old Spanish “j” into a “ts.” Linguistically speaking, that’s all par for the course.

For the word “eggplant,” on the other hand, we can thank the British, who called it that because the earliest variety of the vegetable cultivated in England was a small white one that resembled a big egg. When this was replaced by its larger, purplish-black rival, the Brits, unlike their more conservative American cousins, borrowed “aubergine” from the French. They also, back in the 17th and 18th centuries, called the eggplant a “Jew’s apple,” since it was adored by Sephardic Jews, who may have brought it to English shores. There is even a Sephardic ballad called “El Pleito de Zarzavat,” “The Quarrel of the Vegetables,” in which an eggplant and a tomato debate who is more important. After letting the tomato speak first, the eggplant, one of whose advantages in the pre-modern kitchen was its long, nonrefrigerated shelf life, says:

Which is to say:

“Shut up, you tomato! You aren’t worth a plugged cent.
Two days in the shopping basket and you’re off to the garbage!”

And when the insulted tomato splutters that everybody uses it, in all kinds of dishes, the haughty eggplant replies that it is fried only in the most expensive olive oil bought by the best people. Mi kumida es alavada i mijor ke el tomat, “My dishes are greatly praised and better than a tomato’s,” it boasts.

It was Ladino-speaking Sephardim, then, who must have introduced bronjenas to a Rothschild colony like Zichron Ya’akov — which, although its original colonists hailed from Romania and Bessarabia, had, even in its early years, Sephardic shop owners and artisans. Although the eggplant was not part of Eastern European cuisine and was particularly grumbled about by Ashkenazi immigrants in Israel’s early years, when the nearly bankrupt Jewish state instituted rationing and eggplant, one of the few foods widely available, was so ubiquitous that even the chewing gum was said to be flavored with it, Mr. Benn’s grandmother’s bronjeras are served today in the best Tel Aviv restaurants, where they are known quite simply as h.atsil al ha-esh, or grilled eggplant.

Read a recipe for bronjenas (hatsil al ha-esh) on the Forward’s food blog, The Jew and the Carrot.