May You Live Until 120: DNA Uncovers Secrets To Jewish Longevity 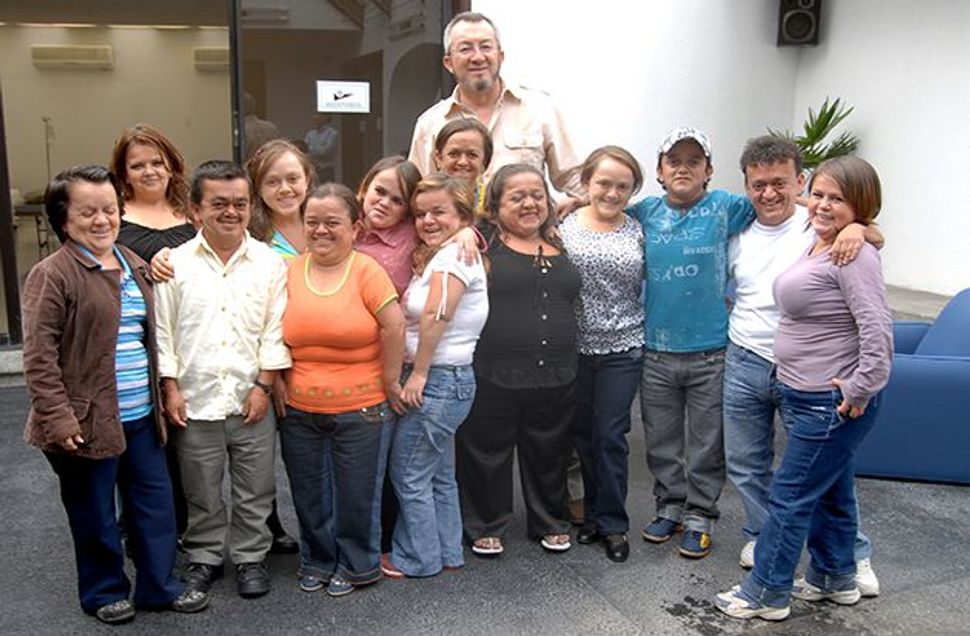 Little People, Big Discovery: Dr. Jaime Guevara-Aguirre, an Ecuadorian diabetes specialist, with some of the people from Loja Province, a region in southern Ecuador, who took part in his study. The same gene mutation that causes these villagers to be shorter than 4 feet tall also protects them from cancer and diabetes. Image by VALTER LONGO

Life expectancy has risen steadily in recent years, with the average American now living for close to 80 years. But that’s nothing compared to the lifespans of people mentioned in the Bible.

According to Genesis, Noah’s grandfather, Methuselah, lived the longest, at 969 years of age, with others, including Adam and his kin, not far behind. But even lesser biblical lifespans are astronomical by today’s standards. Abraham reportedly lived to 175; Moses to 120.

As incredible as these ages seem, they signify the Jewish people’s earliest fascination with long life — a history reflected today by the common Jewish blessing, “May you live until 120.”

That goal is rapidly becoming a reality for many Jews. According to British census data, Jews live an average of five to six years longer than their gentile counterparts, and there may be nearly three times as many Jewish centenarians as in the general U.K. population.

Similar American data is not available because the U.S. census is prohibited from asking about religious affiliation. But older age is a reality for many in the American Jewish community — according to the most recent National Jewish Population Survey data, 19% of U.S. Jews are over 65, and 9% are older than 75.

Improved health care undoubtedly plays a role in the renewed longevity of modern-day Jews. But DNA could be involved, too.

“We know that the Ashkenazi Jewish population… tends to live longer,” said Dr. Winifred Rossi, deputy director of geriatrics and clinical gerontology at the National Institute on Aging. “They don’t get cardiovascular problems like in other populations.”

To better understand this phenomenon, Dr. Nir Barzilai, director of the Institute for Aging Research at the Albert Einstein College of Medicine, has been studying hundreds of Ashkenazi Jews from the New York area who have been living well into their 90s and 100s.

His work over the past decade has revealed three genetic connections that, in part, explain the exceptional longevity of these modern-day Methuselahs. One common DNA sequence increases “good” cholesterol levels two to three times higher than average; another slows metabolism by mildly quieting the thyroid gland; and a third alters a human growth hormone to protect from cancer, diabetes and other age-related diseases.

Most recently, Barzilai’s team showed that Jewish centenarians and their offspring maintain longer telomeres, the caps on the tips of chromosomes that help protect people from age-related diseases such as cancer. And this August, Barzilai and his colleagues reported in the Journal of the American Geriatrics Society that Jews who make it past 95 have dietary habits and levels of alcohol consumption and physical activity similar to their shorter-lived counterparts — suggesting that genes for exceptional longevity could do more than behavior to support long life.

“They were protected by their genes,” Barzilai said. “Not the environment.”

It’s not just Ashkenazi Jews who seem to have a genetic propensity for long life, either. New research indicates that Ecuadorian villagers who likely descended from Sephardi Jews are also genetically protected from diseases linked to aging.

The residents of the isolated community, from the mountains of Loja Province in southern Ecuador, share two notable things: surnames typical of conversos — Jews who converted to Christianity under great pressure during the Spanish Inquisition — and a genetic mutation that blocks the uptake of growth hormone.

This mutation means that many of the villagers are very small, generally shorter than three and a half feet tall — but that’s not the gene’s only effect. By studying the population’s health records for more than a decade, a team led by Valter Longo, a professor of gerontology at the University of Southern California, showed that the dwarfism-related gene also shields the villagers from cancer and diabetes.

Since publishing the findings in February in Science Translational Medicine, the researchers have been studying whether the mutation protects these people from Alzheimer’s and heart disease, too. According to Longo, this knowledge should help researchers devise drugs that mimic the effects of the Ecuadorian mutation.

“We are translating this knowledge into a pharmacological intervention,” Longo said. He noted that the drugmaker Pfizer has a compound called Somavert that blocks growth hormone receptors with effects similar to the mutation in the Ecuadorian population. Although the drug is currently only approved to treat people with pituitary gland defects, Longo envisions variants of the medicine that might help otherwise healthy people live longer.

“We have the potential to extend healthy life in the not too distant future by having a sophisticated anti-aging approach,” he said.

Such a medical intervention would be welcomed by Rabbi Dayle Friedman, head of the Center for Aging and Judaism at the Reconstructionist Rabbinical College in Wyncote, Pa. “One could only support innovation that can foster life that is more whole, comfortable and better,” she said.

That’s ultimately the direction the scientific field is heading toward, many experts agree — and the research on the various Jewish communities is helping to make that possible.

“Some people understandably believe God put us on this earth for a certain amount of time, and we should accept that,” said Donald Ingram, head of the nutritional neuroscience and aging laboratory at the Pennington Biomedical Research Center in Baton Rouge, La. “But we don’t accept that.”

May You Live Until 120: DNA Uncovers Secrets To Jewish Longevity