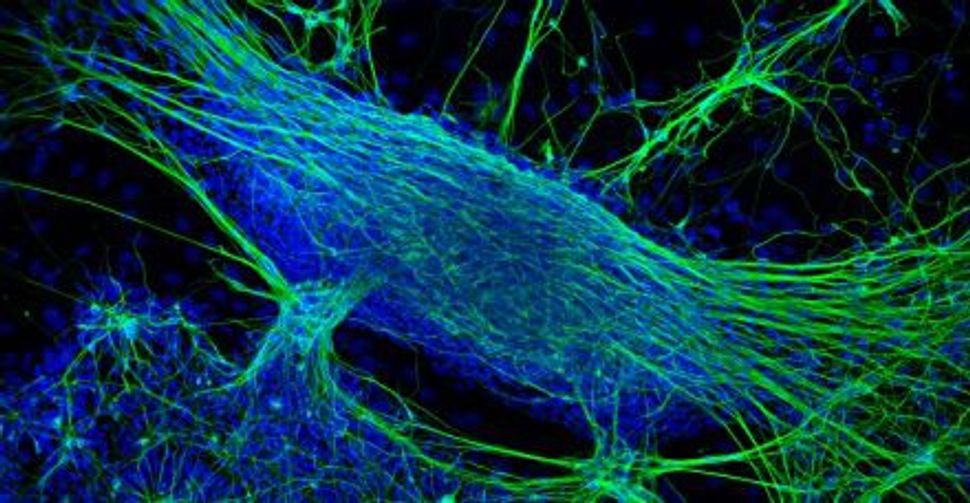 In Petri dishes inside Dr. Lorenz Studer’s lab, translucent clumps of human cells multiply in nutrient baths the color of red Kool-Aid. Under a microscope, the cells look round and gelatinous, like mounds of miniature eyeballs.

“You can’t tell by looking at them, but there’s something wrong in the genetic code,” said Studer, a professor of developmental biology at the Memorial Sloan-Kettering Cancer Center in New York. 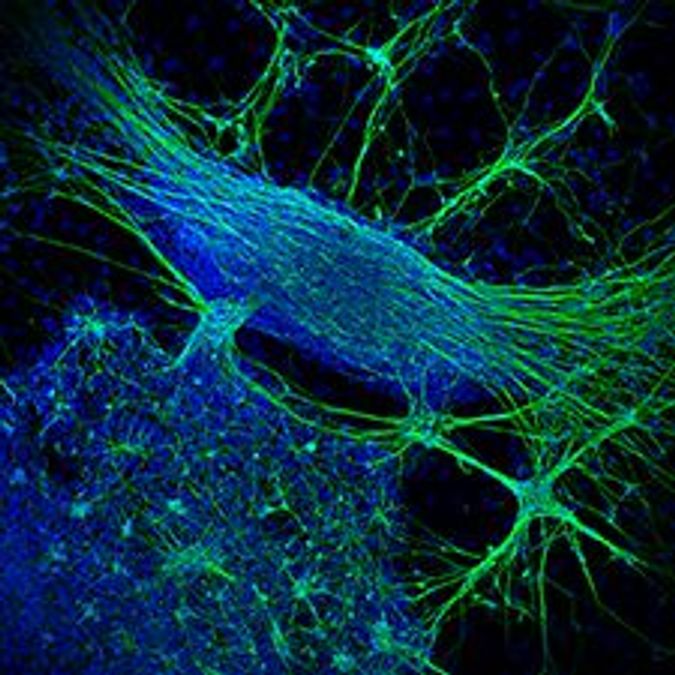 In the Lab: Gene-corrected stem cells derived from a patient with Fanconi anemia can be turned into any cell type, including the nerve cells shown here. Image by JUAN CARLOS IZPISÚA BELMONTE

At one time, these cells were skin cells that belonged to a 10-year-old girl with familial dysautonomia (FD), a rare genetic disease that results in the abnormal development of the nervous system. Also known as Riley-Day syndrome, the disease is caused by an inherited mutation in a gene called IKBKAP and affects almost exclusively Ashkenazi Jews — about one in every 3,600.

Children with FD often develop weak muscles and have difficulty swallowing soon after birth; about half die before the age of 30. There are few good treatments and no cure for FD — although Studer believes the cells in his lab could help change that.

The remarkable thing about these cells is that even though they started out as a sliver of skin no bigger than a pencil eraser, they have been transformed into stem cells that carry all the developmental potential of early cells derived from human embryos.

All Studer and his colleagues had to do was add a virus expressing four genes. The genes reprogrammed the DNA of the skin cells, creating blank slates that, like embryonic stem cells, can become any of the hundreds of types of cells in the body.

The technique for making these so-called induced pluripotent stem (iPS) cells is less than five years old. Before then, researchers had to rely on early embryos discarded from fertility clinics to get such universal stem cells. But iPS cells provide a workaround that avoids the ethical quagmire of using embryos. What’s more, the cells can be obtained from anyone suffering from any disease, which makes them revolutionary tools for studying genetic disorders — and finding promising new drugs to treat them.

Studer and his colleagues have so far created iPS cells from three children and teenagers with FD. To study the disease process at a cellular level, the researchers coaxed the stem cells to form neurons, the brain cells that go awry in people with FD.

“We can recreate, step by step, what goes wrong with those cells as they develop,” Studer explained. “Instead of watching the disease happening in a patient, which would be very difficult, we’re watching it happen in a dish.”

The ability to observe the disease unfold in a Petri dish has allowed Studer to understand FD in ways he couldn’t using any other method, including mouse models and other tissue cultures. It has also allowed him to test new drug treatments. Reporting two years ago in the journal Nature, Studer, together with Gabsang Lee, a postdoctoral research fellow in his lab, showed that a plant hormone called kinetin reversed some of the defects he saw as the iPS cells developed into neurons.

Since then, Lee has exposed developing FD-affected iPS cells to 7,000 different drug compounds. In unpublished work, he discovered several drugs that appear to work better than kinetin at treating the disease.

Although Studer and Lee’s results are encouraging, iPS cells have yet to fully prove their usefulness for treating diseases. Most biologists are still mastering the techniques for turning people’s skin into iPS cells and then into mature tissues. They are also exploring ways to use the fledgling technology to replace diseased cells in the body with healthy cells grown from iPS cells in the lab.

For example, in 2009, Spanish researchers at the Center for Regenerative Medicine in Barcelona used gene therapy techniques to fix the gene defect in hair and skin cells taken from people with Fanconi anemia, a bone marrow disorder that affects around one in 30,000 Ashkenazi Jews. They then converted the mended cells to iPS cells and finally into disease-free blood cells.

“The possibilities are very exciting,” said Clive Svendsen, director of the Regenerative Medicine Institute at Cedars-Sinai Medical Center in Los Angeles, who has derived iPS cells from a handful of children with spinal muscular atrophy as well as adults with Huntington’s disease. “I can imagine a time when every patient has his own personal iPS cell line. If you had a heart problem, we could make beating heart cells from your iPS cells. We could put drugs on those cells to see if they work or if they have a toxic effect before giving them to you.”

However, many hurdles still need to be overcome before iPS cells are safe enough to be transplanted into people, cautioned M. William Lensch, a stem cell biologist at Children’s Hospital Boston who helped create iPS cells from people with Gaucher and other diseases. “These cells are pretty heavily manipulated,” he said. Today’s iPS cells are known to cause tumors in mice, and the process of reprogramming them could alter the cells in ways scientists don’t yet fully understand.

Still, Lensch is confident that scientists will find ways to make better, safer versions of iPS cells, which will ultimately play a big role in treating disease. “We’re basically looking at a whole new way to do medicine,” he said.