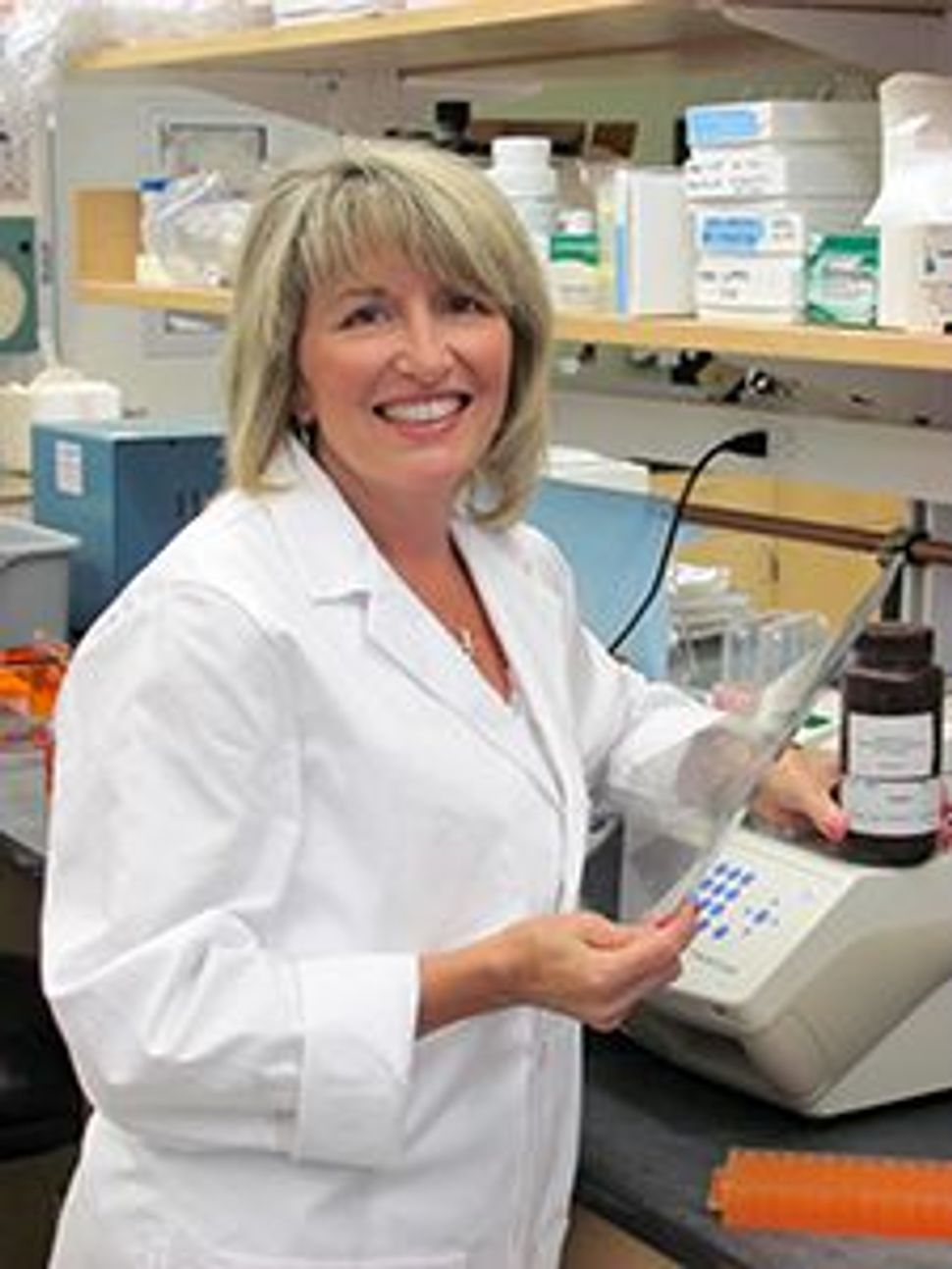 These bottles lost their corks more than 10 years ago, after Susan Slaugenhaupt and her colleagues at the Massachusetts General Hospital discovered the disease-causing mutations responsible for two genetic disorders carried with increased frequency among people of Ashkenazi Jewish heritage. 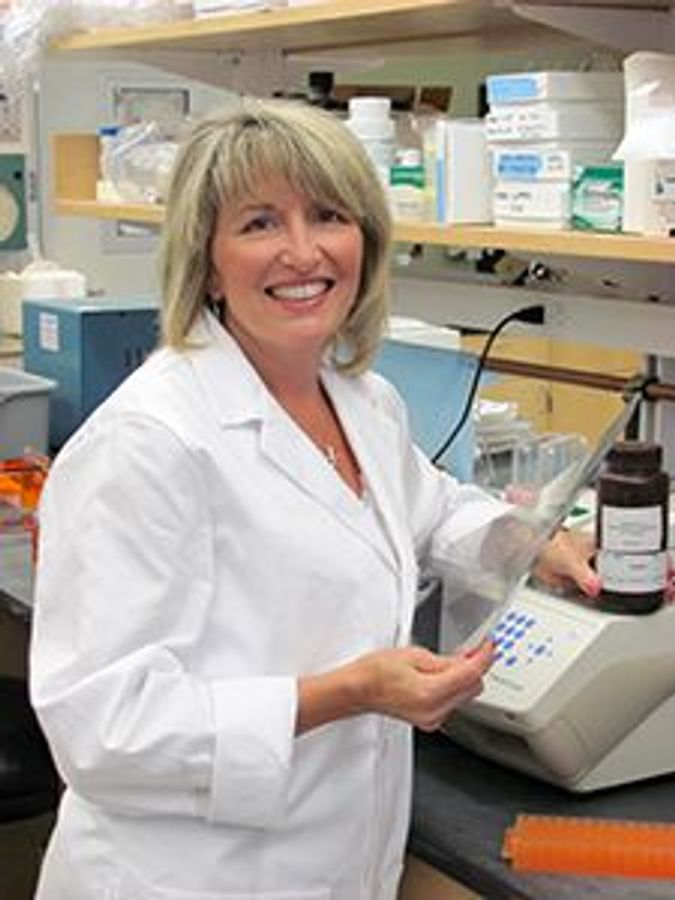 One bottle celebrated the 1999 finding of the mutation for mucolipidosis type IV (ML4), a neurological disorder that was first described a quarter century earlier. The other reminds Slaugenhaupt of the summer of 2000, when her lab confirmed the identity of the unique genetic defect responsible for familial dysautonomia (FD), another disease of the nervous system, first reported more than 50 years earlier.

“It was a crazy time in the lab that August,” Slaugenhaupt recalled with a smile.

Slaugenhaupt is a busy woman — a wife, a mother and a 24/7 scientist. She speaks swiftly, but not too quickly, paced by a distinctive diction that puts emphasis on final syllables. When queried, she can sum up the nature of her scientific career in seconds:

“So, I went to go see a leading gene therapy researcher after finding these genes, and I told him I wanted to fix these genes. ‘You geneticists,’ he said. I said, ‘Why?’ And he said, ‘Why can’t you just do your genetics? You’ve done your job, now you need to let other people who do cell biology take over. You guys are geneticists.’”

The remark spoke volumes — but not about Slaugenhaupt. For her, genetics has never been about just finding genes.

In graduate school at the University of Pittsburgh, Slaugenhaupt used computers and other scientists’ data to study the genetic cause of Down’s syndrome. The work was rewarding. But there was a divide between the people who generated data and those who analyzed it. Squabbles over credit were common — and far from her style.

After earning a Ph.D. in 1991, Slaugenhaupt decided she wanted to get her hands wet in the laboratory and produce her own DNA data. She had no molecular biology training, so she came to Boston to work with James Gusella, director of Mass General’s Center for Human Genetic Research, who had pioneered the use of DNA markers for mapping unknown human diseases.

“It was a fairly brave thing to do,” Gusella said of Slaugenhaupt’s decision to join his group. “She went from not knowing how to work in the lab to becoming an expert in molecular biology and genetics over a very short period of time. She was really both tremendously adept and intelligent and driven to learn, and she also had this natural leadership.”

Gusella handed her one of his most tantalizing research projects: to locate the mutation responsible for FD. Little did he and Slaugenhaupt know that this research problem would take them the next 10 years to solve.

By 1999, Slaugenhaupt had narrowed down the gene’s location to a short stretch of chromosome 9. She then took samples from people with FD and characterized five different genes in this region, but FD-affected individuals only had mutations in one gene, called IKBKAP.

Peculiarly, people with the disease still produced a normal protein in most of their cells. But by looking at brain tissue taken from someone who died from the disease, Slaugenhaupt realized that the mutations only led to dysfunctional proteins in the body’s nervous system.

Slaugenhaupt and Gusella reported their findings in January 2001 in The American Journal of Human Genetics. At the same time, in the same journal, Berish Rubin and his colleagues at Fordham University published their own, similar results. The two groups are now in the midst of a drawn out legal battle over whose discovery came first and, thus, whose patent for the gene takes precedent. On April 28, the Boston team won a summary judgment; the other side immediately filed another suit.

There’s no disputing, however, that Slaugenhaupt and her colleagues were the first to find the ML4 gene. For that project, she teamed up Ehud Goldin, a geneticist at the National Institute of Neurological Disorders and Stroke in Bethesda, Md., who had been petitioned by Randy Yudenfriend-Glaser, a co-founder of the Jewish Genetics Disease Consortium, and her husband to locate the gene responsible for the disease afflicting two of their children.

Slaugenhaupt “was really excellent to work with,” Goldin said. “I quickly realized she knew exactly what she was talking about.” They published their discovery of the ML4-causing gene in October 2000 in the journal Human Molecular Genetics.

Since those publications over a decade ago, Slaugenhaupt has devoted her career to finding cures for both diseases. To that end, she has developed mouse models for both diseases and even started testing new drugs.

“She’s definitely been successful in bringing her expertise in genetics to translational medicine,” said Math Cuajungco, an assistant professor at California State University, Fullerton, who worked with Slaugenhaupt as a post-doctoral fellow.

For instance, in 2004, Slaugenhaupt discovered in cell culture that a plant hormone called kinetin somehow corrects the IKBKAP mutation responsible for FD. Three years later, she showed that the hormone also worked in her mouse models of FD. Then, in 2009, Slaugenhaupt gave kinetin to 29 people with one copy of the defective FD gene who are not ill with the disease and showed that the drug raised expression levels of the functional gene to normal levels within two hours.

Now, 11 FD-affected adults are participating in an ongoing clinical trial of kinetin at New York University’s Dysautonomia Center. In June, Slaugenhaupt presented some of this research to families at the annual FD Day conference, held at the NYU Langone Medical Center.

“I completely believe the drug will work in the cells to increase the protein,” she said with her fingers crossed. “The big unanswered question is: Will that help the symptoms?”

Goldin finds inspiration in Slaugenhaupt’s passion. “She is not just looking for genes but for the important workings of them,” he said. “You just don’t often find this kind of geneticist.”