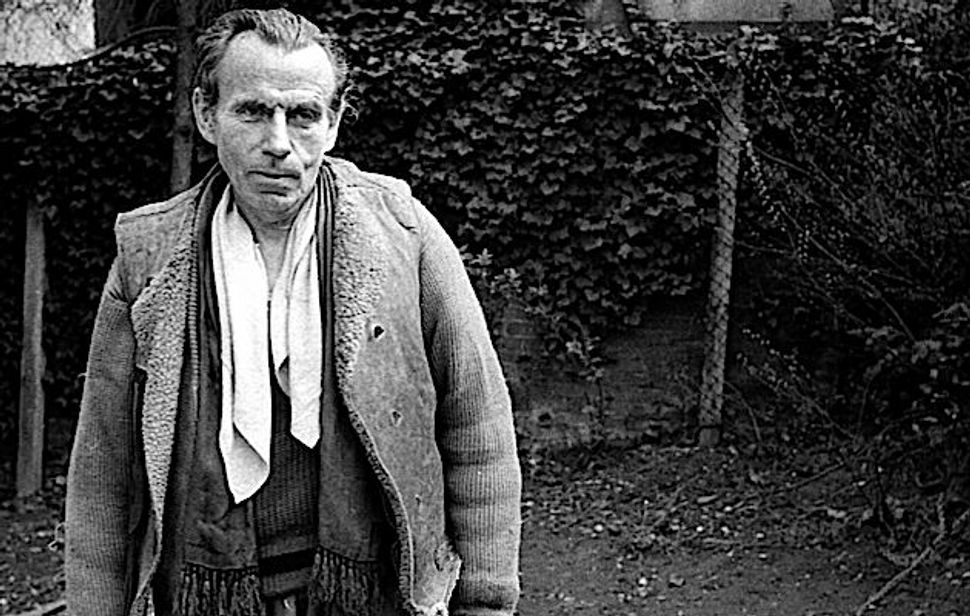 Chronicler of Hopelessness: Céline having seen combat in World War I and being a clinician in poor areas around Paris does not excuse his having plagiarized snippets from ?The Protocols of the Elders of Zion.? Image by Getty Images

Fifty years after his death on July 1, 1961, French modernist author and ferocious anti-Semite Louis-Ferdinand Céline is still causing controversy. Last January, an attempt by France’s Ministry of Culture to “celebrate” Céline on this anniversary ran aground after noted Nazi hunter Serge Klarsfeld pointed out that Céline was not merely the author of such recognized landmarks of modern fiction as 1932’s “Journey to the End of the Night” and 1936’s “Death on the Installment Plan,” but also of three lengthy anti-Semitic tracts, published before and during World War II, that were, as author Pierre Assouline notes, “authentic calls to murder” Jews.

Klarsfeld and Clément had a point: Céline’s three anti-Semitic texts, “Bagatelles pour un Massacre” (“Trifles for a Massacre”) (1937), “L’École des Cadavres” (“The School of Corpses”) (1938) and “Les Beaux Draps” (“A Fine Mess”) (1941) are rife with scatological and crude psycho-sexual descriptions of villainous Jews raping honest Aryan French people like Céline himself. These tracts are unpublished since the war, at the request of Céline and his widow, Lucette Destouches, a retired dance teacher who at 99 still inhabits the house in the southwestern Paris suburb of Meudon where Céline died.

Readily available for purchase or perusal on the Internet, these texts may someday be published in a scholarly edition, causing even further tumult, when Destouches is no longer around to object. For now, “Céline” (Les Editions Gallimard), is a patient, attentive biography by Henri Godard, an experienced editor of Céline’s work, that offers illumination about this singular anti-Semitic author. A useful complement to Godard’s authoritative study is “Céline, an Exceptional Anti-Semite” (Les Éditions Le Bord de l’eau) by journalist Antoine Peillon, also out in May. A punchy polemic, Peillon’s book offers a gimlet-eyed view of the worst of Céline, skewering the writer’s apologists in France’s literary world.

More judicious in tone, Godard’s book details the complexity and apparent contradictions in Céline’s rabid self-promotion as a racist and anti-Semite, despite having numerous Jewish friends, mentors and even lovers. Less convincingly, Godard claims that Céline’s repeated calls for Jews to disappear entirely from France were not a call for their murder, as if there were some feat of legerdemain by which France’s Jews might simply dematerialize. While not negating by any means the hideousness of Céline’s anti-Semitic tracts, Godard also suggests that the “massacre” in “Bagatelles pour un Massacre” refers to the imminent World War and not to the massacre of the Jews, although Céline could surely have intended both meanings by his title.

Godard and Peillon both underline how Céline, influenced by front-line combat in World War I, where he was severely wounded, and by his later longtime job as clinician in impoverished regions around Paris, saw ghastly things that he recounted in his fiction. More gritty and grim than even Samuel Beckett’s, Céline’s expressions of hopelessness acquire energy through a breathtaking — and sometimes droll — use of language, especially street/army slang, gutter jokes and invective. This vital literary energizing of humble linguistic sources differs from other, more refined 1930s Gallic novelists and won Céline some surprising fans, including French-Jewish philosopher Emmanuel Levinas who called “Journey to the End of Night” a “revelation” for “marking both the end and the beginning of a form of literature — and a world.”

The Céline problem really started, as Godard explains, after his second novel, “Death on the Installment Plan,” largely failed to please either readers or critics. Céline changed: He started out a writer who mocked his own Parisian father’s unthinking anti-Semitism, only then to become a caricature of that same anti-Semitism. The mystery, the why and how, of this transformation abides, since violent prejudice is as troublingly inexplicable as violent love. Céline’s novel did not receive the recognition he thought it deserved, so he decided to blame the Jews (and, to a lesser extent, Asians and Africans, too). Alice Kaplan, author of “Reproductions of Banality: Fascism, Literature, and French Intellectual Life’ (University of Minnesota Press), produced a detailed 1986 examination of how Céline’s “Bagatelles pour un Massacre” lazily plagiarized snippets from “The Protocols of the Elders of Zion” and other such texts.

Arthur Pfannstiel, a Paris-based Nazi art critic who funneled such source material to Céline, turns out, bafflingly, also to have been a renowned expert on Italian-Jewish painter Amedeo Modigliani. Just as during wartime, some German scholars of biblical Hebrew were Nazi party members, this was also a historical time marked by dramatic disjuncts. A single person could admire aspects of Jewish culture and even certain Jews, while advocating the murder of others.

Other Nazis shunned Céline because his own contradictions veered into what some onlookers saw as uncivilized lunacy, including rudely low-class japes that did not allow anti-Semitic Germans to feel that they were still upper-crust, sensitively refined people, a key point of Nazi propaganda. As Godard details, the German fascist writer Ernst Jünger was repelled by Céline, whom he called a “Stone Age Man.” Another Paris reviewer likened Céline, both the man and his work, to a monolithic “Easter Island Statue.” Part of Céline’s primitiveness was to claim that any creative spirit whom he disliked, from playwright Jean Racine to painter Paul Cézanne, must have been Jewish. Indeed, during the war, Céline charged that Pope Pius XII and Hitler himself must both be Jews, because neither was making a sufficient effort — in Céline’s view — to transform France into a purely Aryan country.

Even after the mass deportations of French Jews to concentration camps, Céline still claimed that Jews controlled everything. This was too much even for Nazi propagandists, many of whom shied away from Céline out of fear that his hysteric rants could harm the fascist cause. André Derval’s compellingly well-researched “Critical Reception of ‘Bagatelles pour un Massacre,’” out last year from Les Éditions Écriture, details how some reviewers ironically claimed that Céline must be a Jew who was hoping to make anti-Semites look bad by spouting such clearly insane statements.

Nonetheless, even immediately after the war, some Jews were willing to admire Céline the novelist. Milton Hindus, author of “The Jewish East Side: 1881-1924,” also wrote “The Crippled Giant: A Literary Relationship With Louis-Ferdinand Céline,” describing his 1948 literary pilgrimage as a young University of Chicago literature professor to visit Céline, then living in postwar exile in Denmark (Céline would return to France only in 1951, whereupon he received a legal slap on the wrist but never apologized for, or renounced, his views). In 1948, Hindus explains, he had not read all of Céline’s polemical texts, but even so, seeing a novelist whom he had admired “drooling out of both sides of his mouth” was nonetheless a permanent shock and disappointment.

Decades later, other Jewish writers remain firmly fascinated by Céline, drooling or not. Parisian bookseller and writer Mikaël Hirsch, born in 1973, is a grandson of Louis-Daniel Hirsch, who served as Gallimard’s sales manager for more than half a century. The younger Hirsch’s 2010 novel “The Outcast,” out in paperback August 31 [from Les editions J’ai Lu], describes the true story of how, in 1954, Mikaël’s father, then working as a Gallimard messenger boy (he is renamed Gérard Cohen for the purposes of the novel), delivered printer’s proofs to Céline in Meudon, or what the novel calls “Célinegrad.” There, Céline’s “reprobate” status echoes with the young Cohen’s own feelings of exclusion for being too Jewish, or not Jewish enough, to please his compatriots.

Another French-Jewish author, Émile Brami, who is of Tunisian origin and once owned a Paris bookshop devoted to Céline, currently maintains a blog, “Le Petit Célinien,” and has also written studies on his favorite author. Last year, Brami produced a mystery novel, “Massacre for a Bagatelle,” published by L’Editeur and set in the murky world of collectors of Céline manuscripts and rare editions. Such books suggest that Céline is a permanent presence, albeit one incarnating for many readers the epitome of rabid hatred and prejudice, on the French literary landscape. Celebrate him or not, Céline is, for better or for worse — much worse in his case — here to stay.