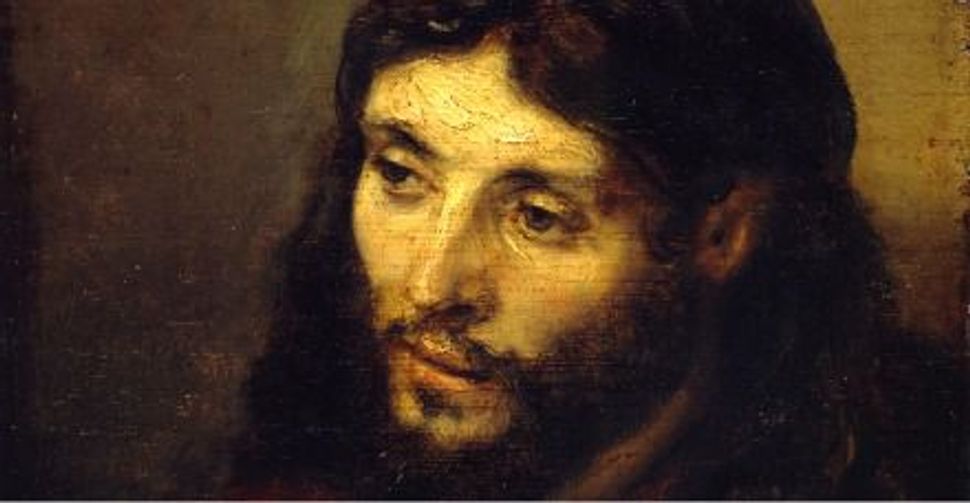 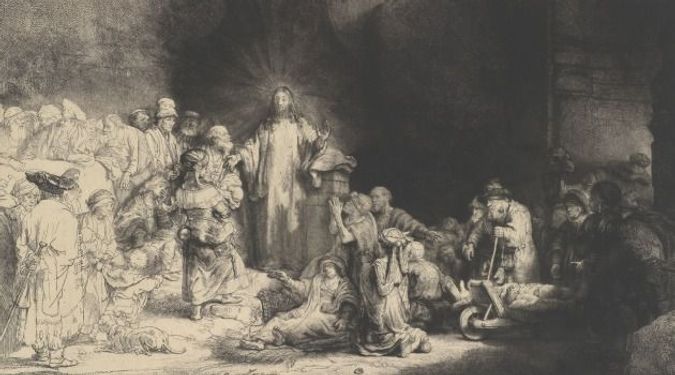 Jewish Jesus: Rembrandt?s ?Hundred Guilder Print? is one of several paintings in which he used Jewish models to depict Jesus, a striking departure from the practice of his time. Image by wikiCommons

Sometime in the mid-to-late 1640s or early 1650s, a young Jewish man — probably of Spanish-Portuguese descent — seems to have taken what would likely have been a short walk from his home in Amsterdam’s Jewish quarter to Jodenbreestraat (“Jewish Broad Street”) 4, where Rembrandt van Rijn lived. Inside the three-story home, which Rembrandt purchased for the whopping sum of 13,000 guilders in 1639, the young man posed for several studies that he surely must have known were going to become portraits of Jesus.

Was the young man so desperate for ducats that he talked himself out of any discomfort about his unusual modeling gig, which his peers surely would have considered sacrilege? Or was the young man one of the many people in 17th century Holland who were dazzled by interfaith dialogue? Was he, perhaps, considering converting to Christianity?

Although much is known about 17th century Holland in general, and Rembrandt in particular — much of it thanks to the many lawsuits leveled against the master painter and inventories of his bankruptcies — it is simply conjecture to speculate about the state of mind of Rembrandt’s Jewish model.

But, according to “Rembrandt and the Face of Jesus” — a new exhibit at the Philadelphia Museum of Art that will subsequently head to the Detroit Institute of Arts and the Louvre in Paris — Rembrandt intentionally relied on Jewish models to depict an unprecedented (and not without controversy) “ethnographically correct” Jesus, as the Philadelphia museum’s website describes it.

In a great catalog essay, “Testing Tradition Against Nature: Rembrandt’s Radical New Image of Jesus,” Lloyd DeWitt, associate curator of European painting before 1900 at the Philadelphia Museum of Art, traces the history of representations of Jesus leading up to Rembrandt’s series of seven paintings of Jesus, brought together for the first time in this show. Where Jesus had formerly been typically presented in a stylized manner, with a golden mane and European features, Rembrandt chose to present a decidedly Semitic Jesus.

Rembrandt’s connection with the 17th century Dutch Jewish community is not unknown. Not only did he live in the Jewish quarter, but one of the painter’s patrons and friends was Manoel Dias Soeiro (Menasseh ben Israel). In his book, “Reframing Rembrandt: Jews and the Christian Image in Seventeenth-Century Amsterdam,” Michael Zell, associate professor of art history at Boston University, has shown that Menasseh’s biblical interpretations influenced Rembrandt’s paintings, particularly the Hebrew inscription in “Belshazzar’s Feast.”

The Philadelphia exhibit, propelled by DeWitt’s essay, makes a compelling case for a Jewish model for Jesus, which departed from the “robust, muscular figure with larger-than-life proportions” often depicted by Peter Paul Rubens and the “similarly muscular and idealized figure” represented slightly earlier by Hendrick Goltzius of Haarlem. “It could be that Rembrandt, in developing a specifically Jewish Jesus, was consciously challenging not only traditional Byzantine iconography but also the classical ideals about divine physicality represented in the works of his immediate predecessors,” DeWitt argues.

Although the exhibit is an absolute must-see show for anyone who cares deeply about Jewish history and art — and the curators ought to be commended for a project that is equally provocative, original and persuasive — it overstates the case for Rembrandt’s Jewish Jesuses on several occasions.

According to the professors, Jesus has broken off the end braid, “as is typically done by the host in a Jewish home to this day,” and the fact that Rembrandt, who “would have known about challah from his contacts with Jewish neighbors and acquaintances,” included the bread “suggests the artist’s acknowledgement of Jesus’s Jewish heritage and his emphasis on the continuity between Old and New Testament.”

One wonders why Rembrandt would have favored a braided challah rather than a rounded one, which would have been more true to the first century. Even if Rembrandt consciously chose a contemporary menu, the braided challah would not have graced the tables of his Sephardic Jewish neighbors. As John Cooper, a former professor of Oriental studies at Cambridge University, explains in his book, “Eat and Be Satisfied: A Social History of Jewish Food,” fifteenth century German and Austrian Jews adapted their “plaited loaves of bread,” or challah, “from the Sunday loaf of their Gentile neighbors.” According to Cooper, it would have been a century or two before the braided loaves became popular, and even then, it was an Ashkenazi, rather than a Sephardic, approach to baking.

At the risk of splitting hairs (or loaves), another Jewish angle Silver and Perlove misidentify comes from Rembrandt’s “Hundred Guilder Print” (c. 1649). As Christ preaches and heals the needy, a camel stands in the shadows — evoking the parable comparing a rich man’s chances of earning a place in heaven to a camel’s chances of fitting through the eye of a needle — and a group of Jews plot his demise.

According to Silver and Perlove, one of the Jews — a bearded fellow with a large hat — arrogantly props himself up on a table and “proudly displays the phylacteries wound about his hand, according to the Sadducean custom.”

The authors are correct that the Pharisees called for tying the tefillin above the elbow, but they confuse the straps (retzuot) with the boxes (batim). If he is wearing phylacteries at all, Rembrandt’s figure displays straps on his arm without any box. There is also no box between his eyes, as the Sadducee custom would have prescribed. Even Pharisees tied their straps below the elbow; the sticking point for both traditions always lay in the boxes. More likely, Rembrandt was just depicting a shadow or fabric rather than phylacteries.

These faux pas do not nearly undermine the important thrust of the exhibit, but it’s essential — even when celebrating a neglected narrative like Rembrandt’s innovative interpretation of Jesus as a Jew — not to overstate the case. At its core, the exhibit presents a compelling case that Rembrandt consciously cast his model for specific cultural and religious reasons. Whether Rembrandt actually made that decision lies in the grave, so to speak, with the painter and his model.

“Rembrandt and the Face of Jesus” is on display at the Philadelphia Museum of Art until October 30.

Menachem Wecker writes on religion and art for the Houston Chronicle, where he blogs at http://blog.chron.com/iconia.