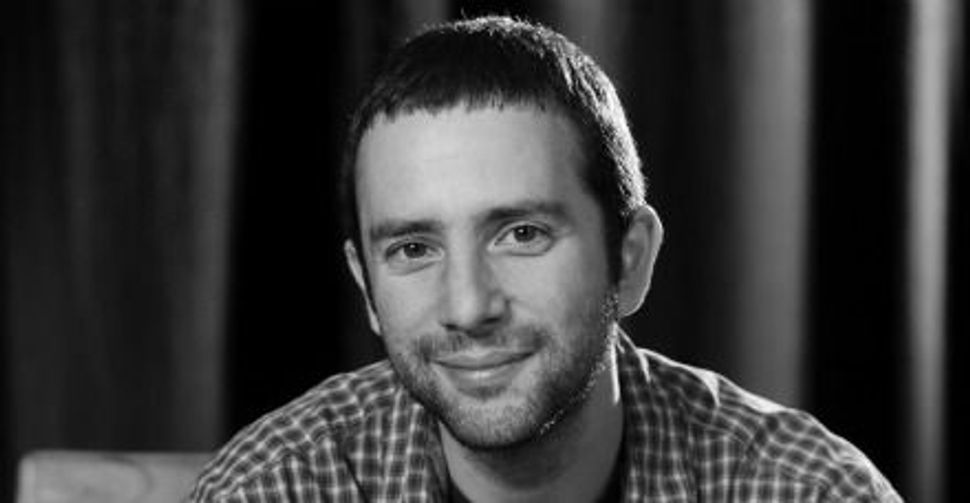 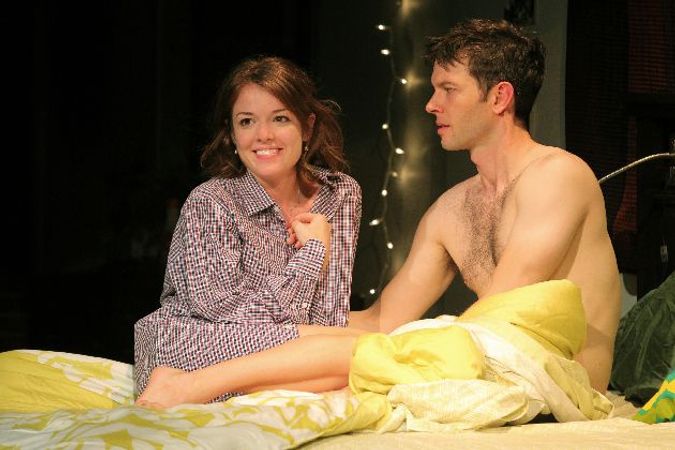 Itamar Moses rambles. It’s a distinguishing, endearing facet of his conversation. “I’m not sure what my point is.”

He was working on changes to his new play, “Completeness,” when we spoke on the phone a few weeks before its September 13 opening at Playwrights Horizons. The characters in it also ramble, but they have a point — much like the play, which takes twists and turns to tell a boy-meets-girl story. Graduate student/computer scientist Elliot meets, loses and maybe regains Molly, a grad molecular biologist. Both want to figure things out. But can there be such a thing as completeness when it comes to the possibilities of the human heart?

Moses writes in a cafe in Brooklyn’s Park Slope most mornings. The Yale and New York University educated, Berkeley, Calif.-born son of Israeli immigrants made international theater news in 2005, when Tom Stoppard wrote the preface to his first published play, “Bach at Leipzig,” about auditions in 1722 for the town organist. That turned out to be a mixed blessing. Being compared to the elder playwright, who also loves historical jokes and science, didn’t always endear Moses to critics. Comparisons to Stoppard’s “Rosencrantz and Guildenstern Are Dead,” which looks at “Hamlet” through the eyes of two minor characters, were inevitable (Bach never appears in Moses’s play).

Charles Isherwood of The New York Times commented, “Sitting through Mr. Moses’s reverent attempt to mimic the brainy irreverence of Tom Stoppard is like being forced to consume glass after glass of flat Champagne.” Reviews of subsequent productions often comment on Stoppard’s introduction, to Moses’s disadvantage.

But Moses had been writing plays of ideas before meeting Stoppard. His first play, “Outrage,” was a dramatization of his senior thesis. It was when the Wilma Theater produced it in 2004 that Moses met Stoppard. “Night and Day” by Stoppard was slated for the fall at the Wilma; he and Moses appeared on a panel there that spring.

Like “Completeness,” there is an exploration of computer technology and human intelligence in “Outrage.” Narrated by Bertolt Brecht, the plot involves both a university receiving a grant and a student looking for a thesis, as well as Socrates in ancient Greece facing corruption charges and the Inquisition in Italy. The jacket of the book proclaims, “‘Outrage’ explores the power of martyrdom, the power of theatre and how the revolutionary of one era becomeS the tyrant of the next.”

“Completeness,” Moses’s seventh full-length play debuted at South Coast Repertory theater in April. It is Moses’s first off-Broadway production in three years. He has been in heavy demand since he had two plays presented at Stage II of Manhattan Theatre Club in 2008 — “The Four of Us” and “Back Back Back.” He has been working on two highly praised television shows: Ray Romano’s Peabody-award winning “Men of a Certain Age” and the second season (airing September 25) of HBO’s Golden Globe Award-winning “Boardwalk Empire.”

He’s also simultaneously working on two musicals: one based on Jonathan Lethem’s “The Fortress of Solitude,” with Michael Friedman, for the Mark Taper Forum, and one with Gaby Alter about reality dating shows, “Nobody Loves You,” which will appear at San Diego’s Old Globe Theatre in May 2012. In case he was hoping for some downtime, a rewrite of his 2008 play, “Yellowjackets,” will have a September reading in the New Work Now! festival at the Public Theater.

In 2009, Moses gave an exhilarating speech to the Association of Jewish Theatre conference that, among other things, was an impassioned defense of theater and an affirmation of his own identity.

… the fact and importance of our Jewishness was a constant: My parents gave my sister and I Israeli names, ensuring, among other things, that I’d have to introduce myself at least twice to everyone I met for the rest of my life; until fifth grade I went to a Jewish Day School where Hebrew and Judaic Studies were on the curriculum….

His own family wasn’t religious, he says, but his Israeli parents come from a “culture of arguing.” Is there something talmudic in the way his plays work with argument? “I think playwriting is, to a degree, inherently talmudic. The forward momentum of a piece of dramatic writing depends on opposition. There’s not much juice if it’s a bunch of people sitting around agreeing with each other,” he said. (I heard “Jews” when he said it, which also works, being difficult to imagine Jews sitting around, agreeing.) “The non-talmudic version of completeness: ‘Can I come with you?’ ‘Yes.’ End of play.”

Like Zach Braff, Moses, 34, writes consciously for his generation. At the center of “Completeness” is a mathematical conundrum called the “Traveling Salesman Problem,” which Moses first came across while taking an undergraduate course in electrical engineering (a compelling argument for science requirements for humanities majors). Elliot describes it to Molly:

Imagine you’re a Traveling Salesman, from some hometown [he writes “home” on the board] who needs to visit a certain number of cities, X [he writes “X =”), and then return home, and you want to do this, naturally, while covering the shortest possible distance.

With more cities, the numbers increase factorially until at only 11 cities there are 40 million possibilities. And so on. After college, Moses realized, “It could be a metaphor for dating, for people of my generation who are approaching it with a different set of premises than people before.” What are those?

“In some ways they are exactly the same. At South Coast rep, and in previews here, sometimes people who are older than I am say, ‘You know it was never easy.’ My sense experientially is that two generations ago, my grandparents’ generation, people stayed married.” The higher rate of divorce, he explains, suggests to his generation that “getting married isn’t automatically forever. There’s a bigger strain of, ‘Why get married?’ or, ‘Let’s not rush it.’ Marriage itself isn’t the point — more the idea of… if I could explain it in an articulate sentence I wouldn’t have had to write the play. Probably it’s a circular thing that happens. Hope and earnestness, cynicism and sarcasm…. I’m rambling and lost my point. What was your question again?” Multiple possibilities are also a hallmark of creating characters. One of the things Moses learned from being in the writing room for “Men of a Certain Age” and “Boardwalk Empire” was the “willingness to throw aside a first, second, third and fourth idea, based on an even better idea lurking out there if I just had patience and diligence to search for it. On my own it’s more like, oh, that idea’s good enough… why cast that aside? I learned how much deeper it’s possible to go.” On both shows, he came on in the second season, which meant that the character arcs were already evolved. “Limits were useful. You don’t come in and say, ‘What if Nucky was kidnapped by aliens?’” he said.

But while being a playwright is solitary in the early stages, theater is collaborative, too. Has he had trouble with left-leaning artists who are often vehemently anti-Israeli? “Growing up Jewish in Berkeley puts you in touch with that contradiction really quickly,” he pointed out, “that you’re politically aligned with a population, a subset of which is not necessarily anti-Israel but reflexively critical of what Israel does.” During his last visit to Israel, Moses realized that “America is so big. Communities never have to talk to each other. Israel is so small, that’s just not true. It’s not a cliché or glib avoidance to say some of my best friends are Arab, it’s literally true. People work together while disagreeing violently about what should be done.”

But the point is there, onstage. Theater puts people in the same room. To watch people talking and to encourage people talking. Even if they don’t know the point.

Gwen Orel is the only journalist who writes for both the Forward and Irish Examiner. She publishes the blog New York Irish Arts and has a doctorate from the University of Pittsburgh.