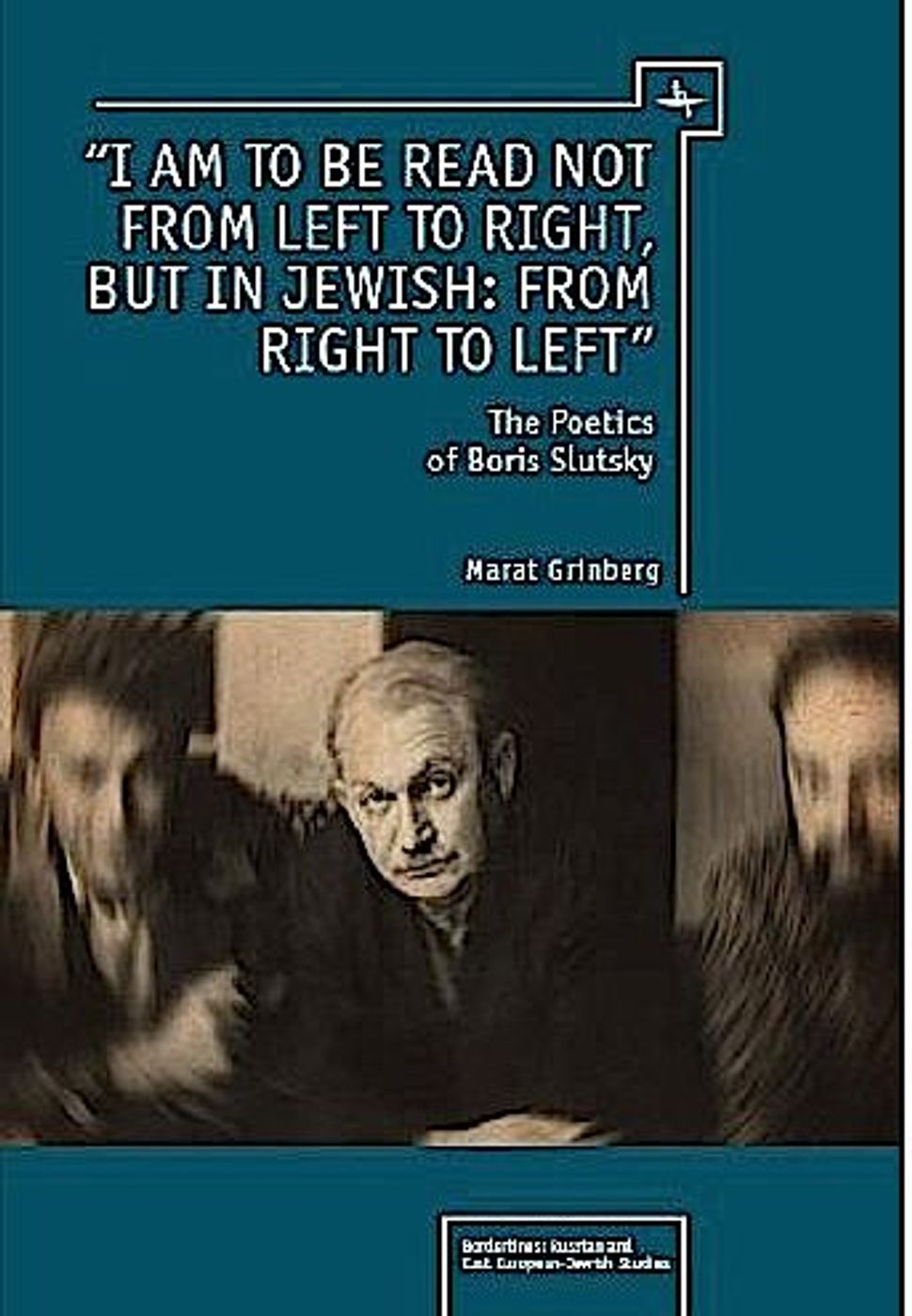 A version of this article appeared in Yiddish, here.

‘I am to be read not from left to right, but in Jewish: from right to left’: The Poetics of Boris Slutsky.
By Marat Grinberg
Academic Studies Press, 400 pages, $65

In the poem “Dream,” Boris Slutsky laconically summed up two defining facts of his generation: “Nineteen is the year of birth, age twenty-two in year forty-one.”

Best known in Russia as a poet of the Second World War, Slutsky belonged to the first — and last — generation of writers whose lives were spent completely under Communist rule. Like most members of that generation, the war split his life in two.

Because of his subject and style — as well as the tragic events of his life — Slutsky has been referred to by one Russian critic as a Job-like figure. In his new book, however, American literary scholar Marat Grinberg presents Slutsky not as Job, but as Moses, and his work as a midrashic interpretation of the Tanach from the perspective of the Soviet era. 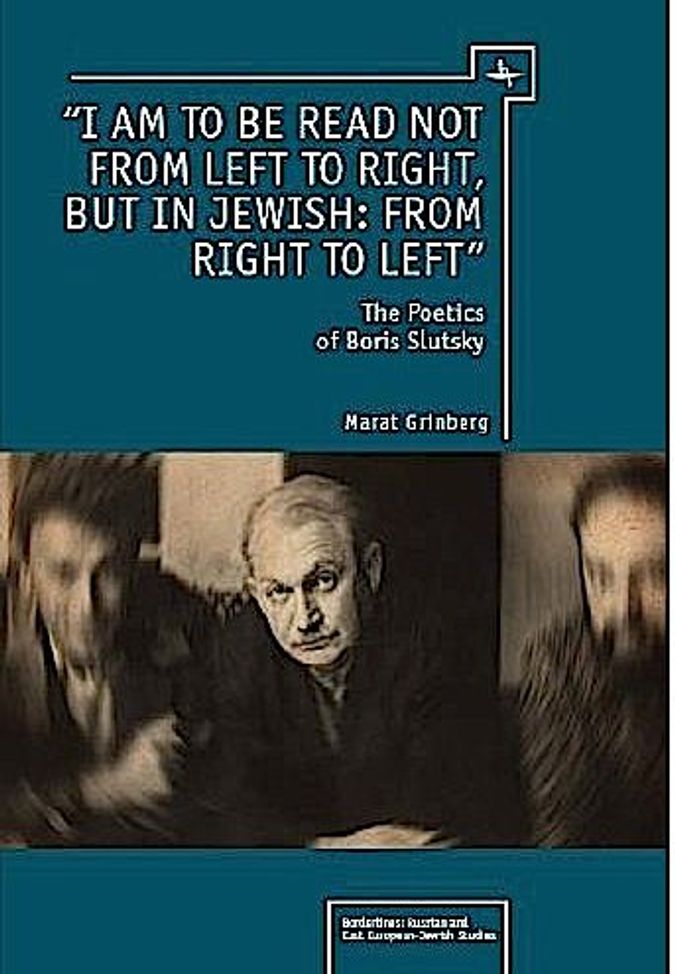 Slutsky grew up in Kharkiv, Ukraine, and studied at the Maxim Gorky Literature Institute and at the Law Institute of Moscow before being drafted into the Red Army following the German invasion in June 1941. During the war he served as a political commissar with an infantry platoon and after the war he worked as a radio broadcaster, not publishing his first volume of poems, “Memory,” until 1957.

In response to his wartime experience — he was badly wounded on the front and remained an invalid for the rest of his life — Slutsky adopted a spare and sober style and a prosaic lexicon, avoiding more elaborate poetic effects. Adding to the tragic impression of his work was the fact that during the final eight years of his life, following the death of his wife in 1978, Slutsky retreated into depression and wrote nothing.

Although Slutsky was a central figure in the post-Stalinist literary revival, and wrote poems condemning the Stalinist regime, he cannot be easily confined within a pro- or anti-Soviet dichotomy. A loyal member of the Communist Party, Slutsky was also a sharp critic of its policies, and especially of government-sanctioned anti-Semitism after the war. But he also took part in the collective hounding of Boris Pasternak for the publication of “Doctor Zhivago,” an act for which he was ashamed the rest of his life. Though better known as a Soviet poet than as a Jewish one, he was also a translator of Yiddish poetry into Russian, and oversaw the first anthology of Israeli poetry published in the Soviet Union.

For Grinberg, however, Slutsky’s own poetry takes on religious symbolic meanings, which he uncovers using a modern critical apparatus and by invoking the authority of Walter Benjamin, Jacques Lacan and Harold Bloom, among others. Unlike most Russian critics, who treat Slutsky as a poetic voice representing the war generation, Grinberg seeks to unearth deeper layers of meaning by “interrogating Slutsky’s poetry in a hermeneutic Judaic mode.” By applying his method vigorously and provocatively, Grinberg presents Slutsky as a demiurge whose “poetry forms a unified cosmos in which metapoetics flows into historiography and vice versa.”

Thus, Grinberg reads Slutsky’s poetry of 1947 to 1953 — the last years of Stalin’s life, marked by the most vicious anti-Semitic campaign in Soviet history — as a poetic midrash. Slutsky, who was not arrested but was unable to publish his poetry, viewed these events “in a metaphysical light,” as a replay of the biblical story of the travails of Abraham, Isaac and Jacob, which revealed the true nature of things: “And we Jews were lucky. / Not hiding under a false banner. / Evil moved in on us unmasked. / It did not pretend to be Good.”

Still, a naive reader might ask whether Slutsky really had midrash in mind when he wrote his poems. He certainly had a firm grasp of Tanach, and as a child he had learned some Hebrew. But even if Jewish themes remained important to him, can his poems be read, according to Grinberg’s method, as if they themselves were a holy book?

In essence, the question is a matter of faith. If you believe that a text contains hidden insights and that you have the key to them, then why not use it? In Slutsky’s poem “Uriel Acosta” the hero hints at a different, Jewish way of reading poetry: “I should be read myself not from left to right, but in Jewish, from right to left.”

Still, Grinberg may be overreaching. One problem with his book is its language, which is laden with the academic jargon of meta-poetics, hermeneutics and metaphysics, and which sometimes obfuscates the original sharpness of its subject. Slutksy’s own style is always clear, simple and material. His vocabulary is rich, but never bombastic, and his poems are accessible to all readers.

Perhaps even more problematic is Grinberg’s assumption that “Jewish tradition is one of quotation and interpretation of sources,” disregarding the significance of oral folk culture. Growing up in Jewish Kharkiv, Slutsky not only read Jewish sources, but also absorbed the daily noise of Jewish street life. Similarly, we have not only to read Slutsky’s poems, but also to hear them. Jewish themes and motifs were as organic and natural for him as Russian ones. Indeed, it is perhaps his ability to merge the two seamlessly that produces a powerful, and sometimes uncanny, effect. “I am of different tribe, not of different creed,” he wrote.

Nevertheless, it is to be hoped that Grinberg’s book will stimulate debate and rekindle an interest in Slutksy, as well as the issue of Jewishness in Russian literature generally. It is likely that this book will receive a lot more critical attention in Russia, where Slutsky is among the last classic poets of the Soviet era. He embodies and expresses the position with all of its contradictions, illusions and tragedies. He is also an important link in the canonical chain that connects Vladimir Mayakovsky with Joseph Brodsky, the last classic poet in the Russian tradition.

From Grinberg, however, we get an entirely different Slutsky, a kind of Soviet Rashi, who created a “Judaic” interpretation of Soviet life. This alone makes Slutsky one of the most interesting and enigmatic literary figures in the history of the 20th century.

Mikhail Krutikov is a columnist for the Forverts.