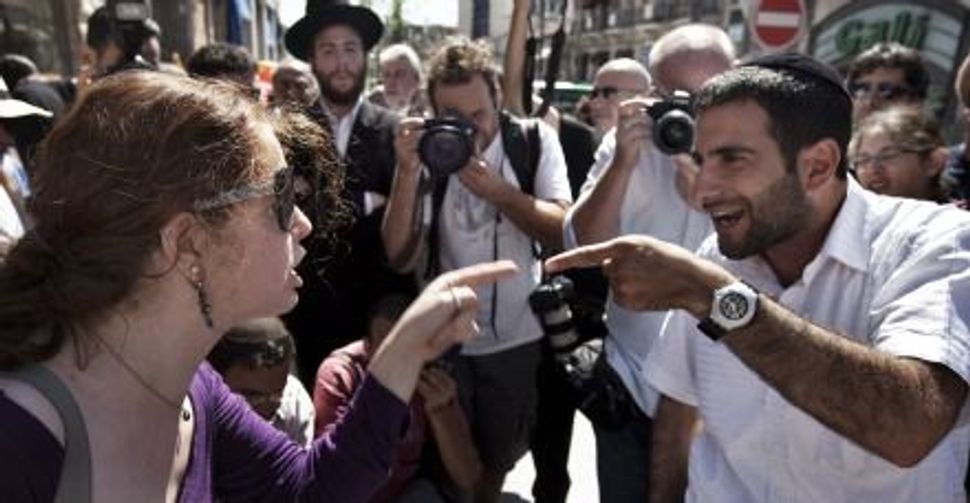 That there has been a realignment of American Jewish attitudes toward Israel is by now apparent and heavily commented on. In some quarters, this has been seen as an earth-shattering, Judaism-betraying paroxysm of collective self-hatred. Yet in fact it is entirely logical.

For years, Jewish moderates like me have held a curious combination of views: as one of my law school colleagues said, “liberal on everything except Israel.” This was because for years there was little alternative. There was no peace process, no nonviolent Palestinian leadership and nothing (other than the far left’s dreams of peace) for moderates to support.

The 18 years since the handshake on the White House lawn have yielded a much wider policy array. Now one can be for or against Palestinian statehood, concessions on Jerusalem, construction of settlements, the blockade of Gaza, the withdrawal from Gaza and 100 other gradations of Israel-Palestine policy. As a result, American and American Jewish attitudes have shifted — but shifted quite predictably.

Conservatives both here and in Israel maintain that the Palestinians fundamentally cannot be trusted; like most conservatives, they prefer “tough” tactics like settlement construction (“facts on the ground”), “stronger” security policies and “harder” lines in negotiation, since to be “soft” would endanger Israel’s security. Like other conservatives, they tend to be more nationalistic, and therefore less sympathetic to the “other side.” These policies flow quite naturally from a generally conservative worldview and are not dissimilar to conservatism in other countries around the world.

Liberals, while also skeptical of the Palestinian leadership, prefer typically liberal policies: more “balancing” in security policies (that is, fewer walls and checkpoints); “confidence-building” steps, such as a freeze on settlements, and “hard choices” in negotiations (that is, concessions on key issues). Unlike conservatives, liberals tend to be leery of nationalism and somewhat sympathetic to how the “other side” sees things. These policies, too, flow from basic liberal premises about peace and conflict, pragmatism, even human nature.

In other words, the American Jewish realignment is simply an alignment of conservatives with conservative policies and of liberals with liberal ones.

American conservatives (Rick Perry, Glenn Beck, the American Israel Public Affairs Committee) support Israeli conservatives (Likud, Yisrael Beiteinu, the settlers). American moderates (J Street, the Obama administration) support Israeli moderates (Kadima, what remains of Labor). The American far left (Noam Chomsky, most college-student activists) supports the Israeli far left (Shalom Achshav, as well as various non-Zionist and anti-Zionist movements). So of course, The New York Times can report, as it did just prior to the Palestinian vote at the United Nations, on the love affair between Benjamin Netanyahu and congressional Republicans. What’s not to understand here?

That view is respectable, time-honored — and conservative. So of course Glenn Beck supports it, and moderates and liberals do not.

As in the United States, where the right has often painted the left as being anti-American, some in the Jewish community say that to be moderate or liberal is to be anti-Israel. Nowhere was this more obvious than in the defeat, in a special congressional election, of Orthodox Jewish moderate David Weprin by Bob Turner, which pundits have in part ascribed to Turner’s attack on Weprin’s and President Obama’s policies toward Israel. Exit polls say that the economy, and the Democrats’ having taken Anthony Weiner’s former seat for granted, was as important as Israel or as suddenly relevant ex-mayor Ed Koch’s call to send Obama a message. But at least for some voters, there was indeed a perception that Obama’s moderate rather than conservative approach to Israel was the same as being anti-Israel.

Other American Jewish conservatives say that liberals are somehow deluded, or unaware of the real existential threats facing Israel. Sometimes they whisper that we are self-hating, or Muslim loving (Barack Hussein Obama), or insufficiently Jewishly proud. But can they say the same of the many Israeli generals who have increasingly come forward in favor of a negotiated two-state solution and against settlement construction? Are they, too, naïve, deluded, secretly anti-Israel, secretly Muslim loving, self-hating or worse? Of course not. Israeli moderates, American moderates, Israeli liberals and American liberals support Israel, but they have a moderate or liberal view of what policies are in Israel’s best interests. We thus oppose the current Israeli government’s policies, while fully supporting Israel itself.

Just as conservatives are confused about their own conservatism, so, too, are they confused (willfully or not) about the boundaries of liberalism. Of course, there are also hard-left, anti-Israel and anti-Zionist folks out there, and “in here” — that is, within the Jewish community. Often, we liberals and moderates find ourselves at the same rallies (or Sabbath dinner tables) as these people, and it’s uncomfortable for us all. But breaking bread together doesn’t turn moderates into radicals. Just as a supporter of the American Israel Public Affairs Committee is not a Kahanist, so a J Street supporter is not a Hamasnik, or even a Shalom Achshavnik. The fringe does not define the movement.

Actually, the reason I think this realignment seems so hard for many people to understand is because of the peculiar dynamics of American Jewish institutions. These institutions are inherently to the right of most American Jews. People who, facing a wide range of philanthropic options, choose to devote considerable resources to Judaism and to Israel fund them. That is laudable. But it also selects for those philanthropists who tend toward more nationalistic and particularistic points of view. Nonparticularistic Jews give more to non-Jewish causes. Jewish particularists fund Jewish causes.

This, too, makes sense. But it leads to the disconnect that I, as well as Peter Beinart and others, have lately decried: that American Jewish institutions don’t speak for most American Jews. Yes, in congressional districts like New York’s 9th, blocs of Orthodox Jews will vote for conservative policies, foreign and domestic. But in general, American Jews are more liberal than their communal institutions, because the institutions are funded and populated by people who have chosen to make Judaism their professional or philanthropic priority.

Of course, there are fantastic progressive Jewish funders and organizations, as well — including this very publication — and I salute them all. But we remain in the minority. Most progressives have less interest in Jewish particularism, and are more likely to be found at The New Yorker and Amnesty International than at specifically Jewish institutions. This doesn’t make them self-hating; it makes them less interested in Jewish particularism. And because of this “liberal drain,” what’s left in our Jewish communal institutions tends naturally toward the right.

Personally, I think conservative policies are bad for both America and Israel. I think they are self-fulfilling: Treat others as enemies, and they will be your enemies. This has now come to pass in Israel, as its ostensible partner has given up on the peace process (which has been neither peaceful nor a process) and gone to the United Nations instead. As Larry Derfner astutely observed in the September 30 issue of the Forward, the Palestinians did so because Netanyahu’s negotiating/delaying tactics left them no other viable option. They have thus fulfilled conservatives’ prophecies that there is no partner on the other side — but only because the conservatives left them no choice.

These are my views, but I don’t pretend that they are somehow “the truth,” or part of some great new understanding of the Middle East. They are garden-variety American liberalism, based on fundamental premises about universalism, rationalism and conflict resolution. Nor do I think that conservatives have somehow missed the point of the Jewish prophetic tradition. Conservatives have their texts, and we liberals have ours. I think they are wrong on both facts and values. But there shouldn’t be any mystery here as to why we all think this way. The only mystery is why there’s a mystery at all.