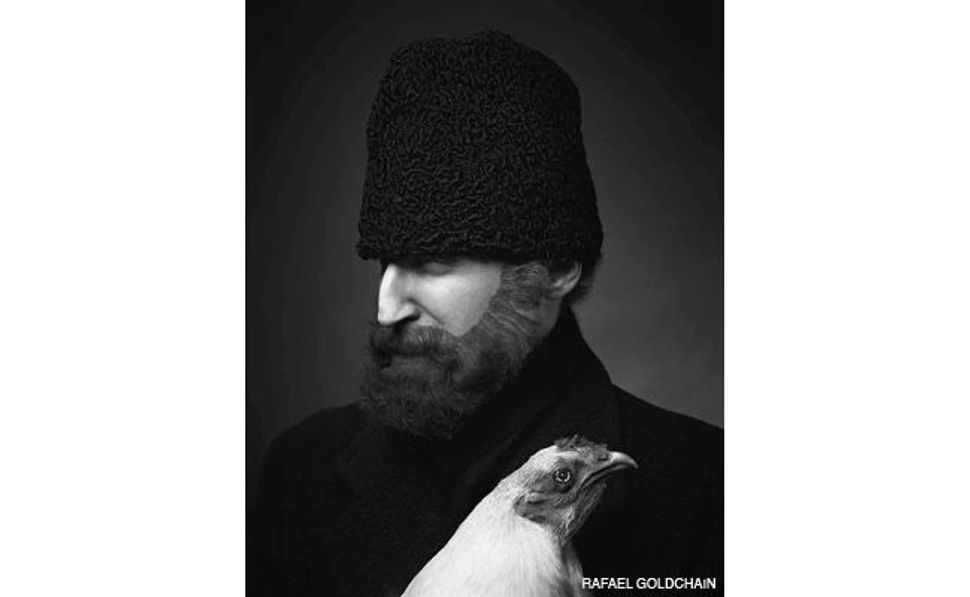 I Am My Family: Photographic Memories and Fictions
By Rafael Goldchain
Princeton Architectural Press, 168 pages, $40.

There is something unsatisfying about Rafael Goldchain’s faux family photo album, “I Am My Family” — and it is this very quality that accounts for its considerable fascination and power. A photographer who has long explored questions of personal identity, Goldchain meticulously researched his family history and created a photo gallery of family members who have one thing in common: They are all portraits of Goldchain, elaborately made up to capture these relatives’ likenesses.

As Goldchain explains in a brief but illuminating artist statement, he decided to pursue this project in order to pass on his Jewish heritage to his son. Part of Goldchain’s family emigrated from Poland to Latin America (he has family in Chile, where he was born, and in Mexico, Venezuela, Argentina and Costa Rica) between the world wars; those who remained in Europe were murdered in the Shoah. Understandably, Goldchain sees his work as coming to terms with ghosts: Ghosts seek to make things right with the living, demanding that their memory not be erased, whether they disappeared due to murder, emigration or the more ordinary forgetting that every family experiences because of time and distance.

The photos are stunning. Shot in black and white, they portray people of all ages and both genders, representing family members in Europe and Latin America. The characters displayed span a wide range of family roles, occupations and stages of life. Brief descriptions accompanying many of the photos provide psychological insights that add to the depth of the characterizations that Goldchain achieves.

The majority of the portraits are based on actual family photos; an appendix documents the elaborate research, pre-visualization and costuming process that Goldchain undertook to create the portraits. I suspect that Goldchain included this appendix precisely to call attention to the complexity and depth of the process, so that viewers would not dismiss the work as a facile parlor trick. This peek behind the creative curtain, following the portraits themselves, certainly prompted me to return to the portraits with a greater appreciation for the thoughtfulness and labor that went into them.

The distinguished curator and art historian Martha Langford, in her introduction to the book, notes with profound understatement that “the contrast between the reality of his family’s history and the reassurance of the bourgeois-style portraits is jarring.” The portrait format also unifies the photos, reinforcing Goldchain’s stated intention to highlight the images’ artifice. For example, the photos purport to depict radically different time periods — from roughly the 1870s to the 1980s — and would, in reality, bear traces of different gray tones, contrast and sharpness, as well as damage and wear. The images, however, are uniformly crisp, with little variation in tone, effectively flattening the differences between time periods and creating a dizzying sensation of simultaneity. At the same time, as Goldchain himself notes, being aware of the images’ constructed nature leads the viewer to oscillate between seeing Goldchain within each portrait and seeing the person he represents.

Goldchain adds an intriguing layer of artifice. Because of the scarcity of family photos on which to base his portraits, he took the liberty of inventing the physical image of relatives for whom no photos exist, and even made up wholly fictional individuals to graft onto the family tree. In both cases, Goldchain carefully harmonized these inventions with those based on actual photos by closely mimicking clothing styles and other period details. For example, he knew next to nothing about, and had no photos of, his paternal great-grandparents. He employed great resourcefulness in basing a portrait of his great-grandfather on the photo of a second cousin’s father as captured in the background within a photo of the cousin’s mother.

Goldchain tells us that he digitally manipulated some of the photos. With one glaring exception, the average viewer is not likely to catch the alterations. Indeed, as noted, the photos’ constructedness is evident from the fact that they do not bear the technical differences witnessing their birth in different time periods. And it is here that the photos are unsatisfying — and revelatory. Their very unity of format and of quality (no technical differences are visible among the photos), calls attention to the heartbreaking nature of the enterprise. It is as if the photos conspired to whisper — or shout — that they are the work of one man (and are of one man!), throwing into relief the artist’s attempt to overcome the sundering of family ties under the pressures of emigration, mass murder and the more prosaic forms of forgetting common to all families.

The book closes with an appendix containing some of the original photos that inspired Goldchain’s fabrications. These photos’ time-worn quality makes their facsimiles all the more evident as imposters, and thus even more unsatisfying. This, in turn, heightens the originals’ poignancy. At some point, the human subjects of photos die, along with those capable of evoking what they were like as individuals in all their complex uniqueness. All we are left with, if we are lucky, are photos. Goldchain’s family album reminds us of the inevitability of loss, even in times of peace, and the necessary incompleteness of attempts to surmount it.