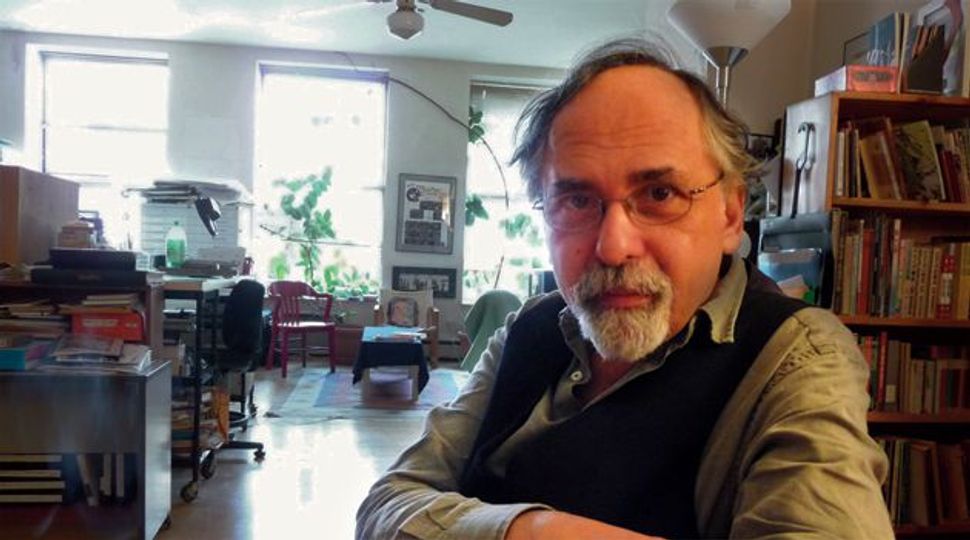 Metamaus, A Look Inside a Modern Classic, Maus
By Art Spiegelman
Pantheon, 300 pages, $35

Sitting forlornly on my bookshelf is a dusty, book-shaped box containing an antiquated item known as a CD- ROM. Titled, “Maus,” it was produced in 1992 and epitomized the cutting edge of hypertext at that time. Containing digitized versions of both volumes of Art Spiegelman’s ground-breaking, Pulitzer Prize-winning graphic novel, it is also chock full of video clips of the author and sound recordings of his father — Vladek, the main character in “Maus,” — as well as numerous documents related to the creation of the book.

For those interested in “Maus,” which is Spiegelman’s graphic novel of his father’s harrowing experiences as a Jew in Poland during World War II (the second part of which first appeared in this newspaper in 1991), the CD-ROM provided a fascinating, in-depth look behind the panels, although it was ultimately marred by the alacrity of quickly advancing computer technology and was rendered unplayable after only a few short years, a sad death for a useful and interesting product.

We owners longed for further technological advances that would bring it back to life, since it contained all manner of “Maus” data and ephemera unavailable elsewhere. Now, with Spiegelman’s publication of “MetaMaus,” the prayers of those hoping to delve deep into the who, what and why of the saga of Vladek and Art Spiegelman have finally been answered. This fat volume of images, interviews, genealogies and a DVD (the technological life of which will hopefully be longer than the abandoned CD- ROM) contains both volumes of “Maus,” interviews, documents and much more that will satisfy the “Maus”-driven needs of any Spiegelman aficionado.

Since it first appeared in book form in 1986, “Maus” has spawned a small industry of critical scrutiny in the form of books and dissertations, and it has been discussed in dozens of articles, many of which attempt to pry into the psyche of the author and the retelling of his father’s story in tiny pictures, with its innovative visual taxonomy of Jewish mice and German cats.

Like many children of Holocaust survivors, Spiegelman is haunted by the specter of his parents and their survival, but as the author of this unique book he is also shadowed by another specter, one that, as he says, follows him around like an enormous mouse: the specter of the massive, international success of “Maus.” Plagued and apparently overwhelmed by inquiries about the project, “MetaMaus” is an opportunity for Spiegelman to offer an answer to all “Maus”-related queries, once and for all.

Just as “Maus” itself is an informed interview with Vladek Spiegelman, “MetaMaus” is an extended interview, a memoir about crafting a memoir. Divided into three sections, Spiegelman provides extensive answers to the generalities about which he is asked most by journalists and students: “Why comics?” “Why the Holocaust?” “And why mice?” In response, Spiegelman often leaps into tangents on a huge variety of “Maus”-related issues. In doing so, he reveals just what a meticulously researched and deliberate presentation of Vladek Spiegelman’s wartime experiences “Maus” offers.

For those who look at “Maus” and still think “comic book,” a stroll through “MetaMaus” will show them the broad array of sources Spiegelman used to research his story: sources that range from academic texts to pulp novels; serious documentary films to crass Holocaust dramas; drawings by survivors to archival photographs, as well as a number of ethnographic interviews and visits to death camp ruins. All these aspects combine in the artist’s clever renderings to create a meticulously detailed portrayal of Vladek Spiegelman’s story of survival during World War II.

Art Spiegelman’s artistry in making “Maus” a seamless narrative is laid bare in “MetaMaus.” Dealing with a morass of different resources and conflicting influences — among them text, image, film and memory — we see how Spiegelman wrangles with his portrayal of his father and his story, as well as his relationship with his father and with the Holocaust, history, memory and himself. Throw in his family, his shrink and a prying press, and one begins to understand the kind of emotional and intellectual pressure cooker into which Spiegelman threw himself.

The massive interview that comprises the bulk of “MetaMaus” was conducted between Spiegelman and Hillary Chute, an English professor at the University of Chicago who had been granted access to Spiegelman’s files and whose expertise on all things “Maus,” from the Spiegelman family to the Holocaust to how graphic novels are built, guides her extremely well. Her discussions with Spiegelman, which occurred over the course of four years, elicit compelling and evocative answers from a writer/artist who claims to be sick of talking about his best-known work. They bring the creation story and missing background details of “Maus” into clear view.

What “MetaMaus” reveals is that “Maus” isn’t simply a Holocaust narrative; it’s about, as Spiegelman himself says, “the retrieval… and the creation of memory,” in other words, it is a work of memoir literature. With the included recordings and text of the transcripts, Spiegelman allows us to see some of the choices he made as to what to include in his story and what to leave out during the process of crafting his father’s Holocaust memoir.

The “MetaMaus” DVD provides even more fascinating “Maus” ephemera than the CD-ROM did. With the entire text of both volumes, the reader can click on panels to discover early sketches, comments and interview material. Truly multimedia, it provides an incredible wealth of data. Many of the sketches, however, are, unfortunately, quite small — and can be disappointing. Enlarging them only compromises their resolution, leaving the viewer with a “better than nothing” kind of critique.

This is a strange flaw that doesn’t ruin the product, but certainly makes it less compelling than it could have been. That said, it is nonetheless a pleasure to listen to Spiegelman talk about his artistic process when he is most comfortable and most knowledgeable. Complaints aside, “MetaMaus” is an intriguing look into the guts of a massive artistic-historical project. With its visual, textual and historical components, the book untangles the tight narrative and visual knots into which the medium, the message and the process of “Maus” are tied. With grist to millers of either “Maus,” Spiegelman or both, it is a must-have item.

Not simply an innovative visual rendering of Polish Jew’s story of survival of the Holocaust, “Maus” is, as Spiegelman puts it in “MetaMaus,” “a three hundred page yahrzeit candle.” It is his way to commemorate his father, as well as a generation lost in the fire.