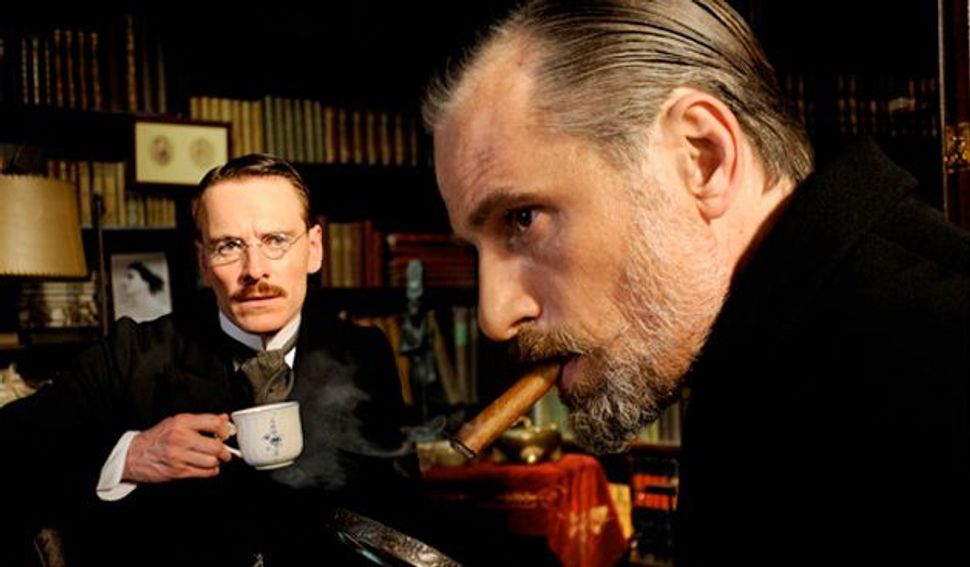 Jung and Freud: Michael Fassbender (left) and Viggo Mortenson with a cigar. Image by Courtesy of Sony Pictures

For the 11 days of the 68th Venice International Film Festival, which ran in September, the stars walked the red carpet of the Palazzo del Cinema, the main cinema venue adorned with flags of the 35 countries represented at this year’s installment of the world’s oldest film fest.

From the middle of the building billowed the Israeli flag, waving proudly alongside that of Iran. For Eran Kolirin, writer and director of the Israeli competition entry “Hahithalfut” (“The Exchange”), the juxtaposition was neither humorous nor ironic. “This is the place where we should be together. And hopefully in the rest of the world,” he explained at the festival.

Kolirin’s film, one of three Israeli productions screened at the festival, is mysterious, slow moving and unlikely to garner the sort of attention lavished on his 2007 début, “The Band’s Visit.”

At the center of “Hahithalfut” is Oded, a strangely aimless physicist who decides to destabilize his life by introducing irrational behavior and chance, and in doing so, transfigures the commonplace. On the surface, it has little in common with “The Band’s Visit.” Like the earlier film, though, it too is a film about dislocation. “The Band’s Visit” was also about being lost in a small desert, and this is a film about a man getting lost in your home. It’s when your home becomes the desert,” the director explained.

One feels certain that there’s some sort of deeper meaning, political perhaps. Kolirin denies both suggestions. “I don’t think movies should have messages. It is better to write emails if you want to convey messages,” Kolirin tells me when we met for an interview by the pool of the Lancia Lounge. He seemed irritated, if not entirely surprised, that people are keen to read political meaning into his films simply because he’s Israeli.

“There’s this expectation that you will be playing this clown that they want you to be, which is staging this political conflict as they see it on the news,” he explained. His voice is calm, no trace of anger or annoyance.
He continued: “If you’re a rock singer, you make an album and you have one protest song and 12 songs about love, and you’re considered a protest singer for the rest of your life. It just takes much more time to make a film and, naturally, you’re not always directly concerned with the politics.”

Kolirin understands that he has risked being accessible, but also that this risk was necessary after the success of his first film. “The audience put its faith in me, and I thought I need to be ethical because I was given so much, I need to give back.” For Kolirin, the only way forward was by refusing to sound the same note twice. “I hope that the audience will see it,” he explained optimistically.

The incendiary “Edut” (“Testimony”) featured Israeli actors reading Palestinian testimony of brutality in the occupied territories in a self-righteous, smug and pretentious fashion. The quasi-documentary seems less interested in putting forth arguments or context and relies on creating in the viewer a feeling of visceral disgust. I myself walked out toward the end of the film, right as a man was describing how Israeli soldiers at a checkpoint forced him to have sex with a donkey. The film is savage and gruesome: it seems more like propaganda than art.

Far better was “Would You Have Sex With an Arab?” whose title caught my eye. How could it have not? Surprisingly, it proved to be far more than a clever name. The French director Yolande Zauberman uses the question and responses she elicits as a springboard for getting people — Jewish Israelis and Israeli Arabs — to talk about the conflict. It’s a wonderful bit of indirection that succeeds where more straightforward political questions might fail. The interviewees on both sides often reveal far more of their own prejudices and geopolitical viewpoints than they seem to realize.

One of the most illuminating (and entertaining) contributions comes from the Israeli performer Boogie Balagan, who brings the director home to meet his charming Algerian mother. She challenges the director by asking “What about Arab Jews?” Questions of national and ethnic identity are also raised by Juliano Mer-Khamis, the Israeli artist and activist of mixed parentage (Jewish father, Arab Christian Mother) and founder of The Freedom Theatre in the Jenin refugee camp in the West Bank who was assassinated by unidentified gunmen in April. The film’s biggest asset is that it puts a human face on the Middle East conflict — not by sidestepping political context or playing favorites, but rather by confronting ordinary people with this personal, rather than ideological, question.

Canadian bad-boy director David Cronenberg was back at the fest with his fin de siècle costume drama “A Dangerous Method,” about the fraught working relationship between Carl Jung and Sigmund Freud. Cronenberg is known as a director who does not shy away from controversy or scandalous content, but the most shocking thing about this tame and finely made film is the counterintuitive casting of Viggo Mortenson as Freud.

Mortenson, sporting a full beard and cigar, wears Siggie’s mantel with ease. He stoops slightly, not to diminish his height, but rather to suggest a pride undaunted by weariness. Buttoned up, rigid and endlessly argumentative, Mortenson hits on a suitable tone of authority and not a little arrogance. It is a masterfully understated performance in an altogether excellent film.

One of the film’s starkest contrasts is the young, energetic and inquisitive Jung with the older, more cynical Freud. Religion plays no small role in this duality. Jung saunters about his magnificent property in the Alps, goes sailing and blithely cheats on his wife. Freud is, by contrast, alone, constantly irritated or arguing, in his stuffy, cluttered apartment in Vienna.

In the film, Freud’s role is secondary to those of Jung (the equally wonderful Michael Fassbender) and Sabine Spielrein (Keira Knightley), another early psychoanalytic explorer, Jung’s former patient and on-again off-again lover. The film is very much attuned to period detail and feels like a Merchant Ivory production with dark shadings. That said, it is a far cry from Cronenberg’s signature films — at the press conference, the director explained that he can’t see “A Dangerous Method” appealing all that much to his fan base.

Cronenberg shows admirable restraint and has fashioned a film, based on the play “The Talking Cure” by Christopher Hampton (“Dangerous Liaisons”), which is largely epistolary. Conversations make up a great deal of this movie, many of which are far more stimulating than the brief S&M scenes featuring Fassbender and Knightley.

When the Jewish Spielrein’s relationship with Jung sours, Freud gives her the following advice, admonishing her to give up her fantasy of catching her Wagnerian hero. “Put not your faith in Aryans,” says Freud, and Mortenson is convincing enough to make you feel the burden of Freud’s solitude and distance from a society that has shunned him, and will eventually expel him.

Suspended in limbo between fiction and documentary is “Birmingham Ornament” from the Russian team of Andrey Silvestrov and Yuri Leiderman, a crazy quilt of strung-together fragments whose irreverent and psychedelic flavor harkens back to the metaphysical cinema of the 1960s and ’70s. Specifically, one senses the strong influence of Dusan Makavejev, whose “W.R., Mysteries of the Organism,” remains the touchstone for free-form documentaries.

In between gibberish-babbling Russian newscasters, a soulful folksinger in Odessa who belts out surrealistic songs in public and a trio of red-haired Nazis, the film is held together by the gripping testimony of Leiderman’s father, who describes his childhood during World War II. These interviews, honest, straightforward and tragic, are interspersed with the film’s more radically strange elements, creating a post-modern portrait of contemporary history haunted by the Holocaust in this insistently nonexpository, metaphorical film essay.

A. J. Goldmann writes about European culture for the Forward. He blogs at nyfeuilleton.com.