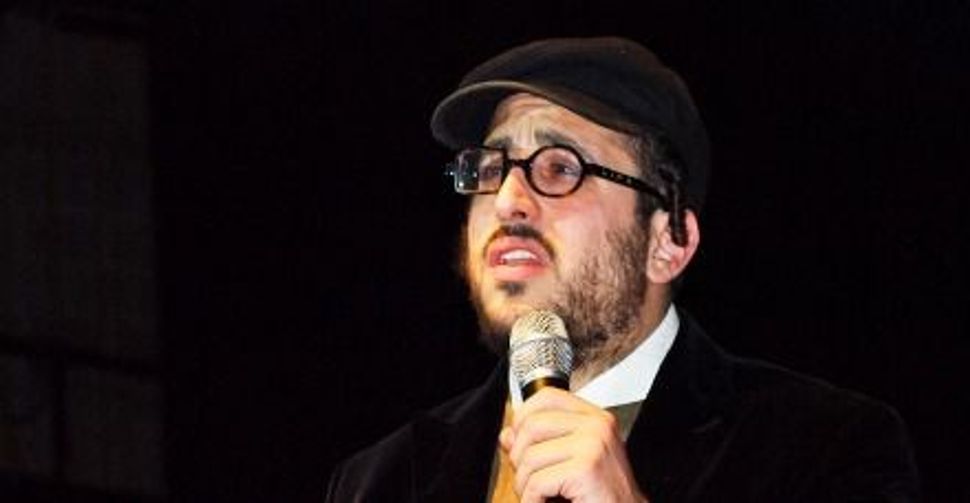 Had you been checking out the celebrity gossip website TMZ.com during Rosh Hashanah services — what else are iPhones for? — you might have been amused to learn that the rapper Tyrese was banned from the biggest hip-hop radio station in Delaware for addressing his audience as “homies.” Almost as entertaining was the news this past August that Chinese censors banned 100 songs, including ones by Katy Perry and Lady Gaga, from music websites. Precisely what criteria, you might ask, were applied here? Outdated slang, weak lyrics and a fondness for meat hats?

Lest we get too smug about the Jewish tradition of tolerance, however, here’s a news brief I stumbled across earlier this year on the website of Heeb magazine: “A riot broke out when Rabbi Amnon Yitzhak spoke in the West Bank ultra-Orthodox community of Emmanuel. Yitzhak, who has tried to ban music and other things he considers to be immoral, was speaking when opponents began to play music. Yitzhak’s followers sprayed tear gas and Yitzhak left the scene.”

My initial reaction was to laugh. Black hats tear-gassing each other over banned music? That’s one for “The Daily Show.” So, too, was an alleged attempt to stymie the rabbi’s efforts by threatening to circulate nude photos of his lawyer.

My second reaction was a mixture of befuddlement and dismay: Is this how Jews are supposed to behave? And who bans music, anyhow?

The answer to that first question is, of course, “No.” Unfortunately, the answer to the second is, “We do.” For as I soon learned, a phenomenon that I had once exclusively associated with prissy radio station managers, authoritarian regimes and Muslim extremists — banning this, fatwa-ing that — is also a popular pastime in the loonier precincts of the Haredi community. Some of the most prominent musicians in the Orthodox world, from Yaakov Shwekey and Avraham Fried to Mordechai Ben David and Lipa Schmeltzer, have run afoul of such bans. In one particularly notorious case, the frum police successfully pressured Schmeltzer to back out of a 2008 gig at Madison Square Garden, leading to the cancellation of a concert that was intended to raise money for the weddings of Israeli orphans.

The reasons for banning music and musicians are many and varied. Sometimes, performers are banned for appearing before mixed audiences. In other cases, specific concerts or even entire genres of music that might lead the faithful into sin — rock, jazz, jazz-rock — are declared out of bounds. The list of offenses is long and, to a musical libertarian such as myself (my attitude toward freedom of musical expression is basically the same as the American Civil Liberties Union’s attitude toward the First Amendment), rather sad.

Typically, the process involves the following: First, a kanoi or askan, a hard-liner or community activist, within the Haredi community decides that a particular act is unfit for Jewish consumption. Said hardliner or activist then approaches one or more major rabbis, or gedolim, to sign on to a public proclamation, or kol koreh, condemning said act as if it were a witch in Old Salem. Before you know it, there are posters up all over Haredi enclaves, warning the observant not to hire the defamed, and not to attend their concerts or publicize their work.

The act of banning music is not new. Perhaps the most famous example comes from the Talmud, in which the contention kol isha ervah — “a woman’s voice is forbidden” — emerges from a typically labyrinthine running argument about the capacity of the female voice to inspire licentiousness. But as one musician who often plays the Orthodox circuit points out, the rabbinate has historically banned music (and anything else, for that matter) rather sparingly, and only as a remedy of last resort.

There is an established halachic process for dealing with objectionable material or behavior. It involves presenting one’s case before a beit din, or religious court, a process that typically includes consideration of multiple opinions from various authorities, and permits the accused to respond to the charges. The same musician, who for obvious reasons has requested anonymity, finds the trend away from such a measured response and toward the immediate imposition of bans troubling, in part because it suggests that at least some within the ultra-Orthodox community are abandoning halachic practice. “It appears,” he said to the Forward, “that they are not following their own rules.”

So we have ultra-Orthodox activists claiming halachic justification for banning music while simultaneously ignoring halachic precedent. That kind of hypocrisy cannot possibly be good for the Jewish people. Nor can the way in which some ban seekers look to manipulate rabbinic authority be of benefit, especially given the flawed and sometimes offensive reasoning they follow.

In the case of the 2008 [Schmeltzer ban,]( ](http://www.thejewishweek.com/news/new_york/playing_banned_0 ‘Schmeltzer ban,’) a similar ban against Shwekey and Fried and even earlier screeds against mixed-seating concerts, commentators both inside and outside the ultra-Orthodox community accused Haredi activists of duping rabbis into condemning musicians with whom they were not at all familiar. And one of the signatories to the Schmeltzer ban — Shmuel Kamenetsky, head of the Talmudical Yeshiva of Philadelphia — later admitted that he and some of the other rabbis had simply followed the lead of the Israeli gedolim, who signed first without performing due diligence. Both phenomena illustrate the weight of rabbinic authority in the ultra-Orthodox world while simultaneously threatening to undermine that authority by demonstrating, in very public fashion, just how fallible the rabbis can be.

Then there are the ignorant and often foolish justifications offered for condemning the music itself. For example, ban seekers often complain of contamination by secular influences, when anyone possessing even a glancing familiarity with Jewish music would know that Jews of all stripes — Ashkenazi and Sephardic, Orthodox and Reform — have adapted secular and non-Jewish material for sacred use from the get-go.

Some early Hasidic sages believed that it was their duty to “rescue” secular tunes for sacred purposes — the Tzadik of Kalev famously transformed a Hungarian shepherd’s tune into a devotional song — and the list of liturgical tunes derived from secular or Christian sources is long. (Maoz Tzur borrows from the Protestant chorale “Nun Freut Euch ihr Frommen Christen,” Kol Nidre dips into Gregorian chant and you might well have sung a version of “Adonai Melech” that bears a striking resemblance to a strain from Verdi’s “La Traviata.”) One cannot draw a line between the secular and the sacred in Jewish music, at least not in terms of musical materials themselves (modes, melodies, rhythms), for the simple reason that such a separation has never existed.

But wait. It gets better.

According to the Yeshiva World News, an online Orthodox news site, one exceptionally ardent banner, Rabbi Ephraim Luft, founder of the Committee for Jewish Music, has collaborated with groups such as the scarily named and strangely familiar Guardians of Sanctity and Education to formulate guidelines for acceptable Jewish music. (Interestingly, Haredi activists have also tried banning Orthodox websites like YWN, to little or no effect.) Luft has also laid out his thoughts on matters musical in a lengthy pamphlet, “The Torah Is Not Hefker.” I would commend, under most circumstances, a religious scholar for explaining his position in such detail. In this case, however, I’m thinking that Luft probably should have taken the day off.

I won’t go into the gory details; someone else has already done that for me, and with considerably greater precision than I could have mustered. Suffice it to say that anyone who condemns modern Jewish music for drawing on black American sources, and hence for drinking from the allegedly tainted well of African music proper — music that has, according to the good rabbi, “no intellectual content, and is also not made to give respect or honour (sic)”; “primitive music that was used for avodah zara [strange worship] and the occult art of voodoo” — deserves to attract the attention of a juju man wielding a voodoo doll and a very sharp pin.

My anonymous acquaintance believes that the efficacy of music bans is waning as more and more of the ultra-Orthodox see just how silly these bans are. For that, we can all be grateful. Unfortunately, he also believes that the decline of their influence will make the extremists try even harder. And he may be right: In early August, a group of Chabad rabbis came out swinging with yet another kol koreh against mixed seating, this one conveniently timed in advance of an upcoming concert by Fried.

If only we could find some way to ban intolerance.

Alexander Gelfand is a freelance writer whose work has appeared in The New York Times, The Economist and (his favorite) Bartender magazine.