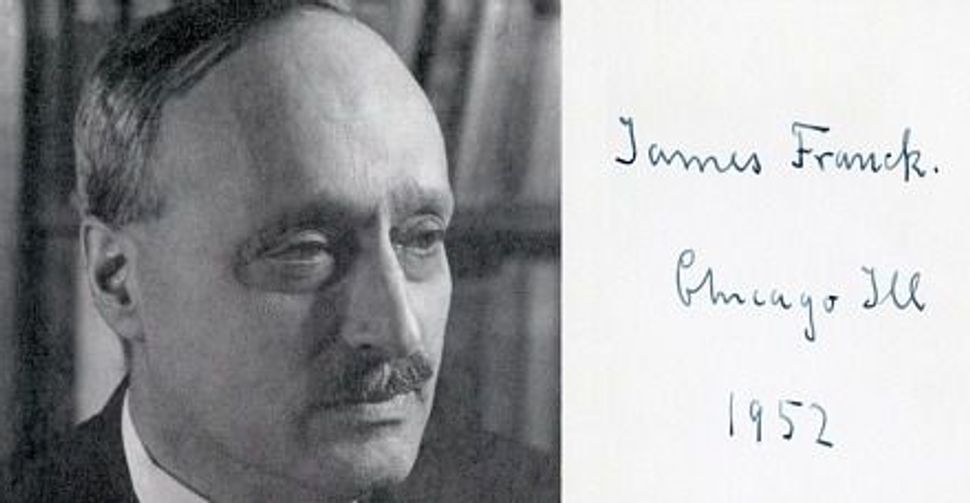 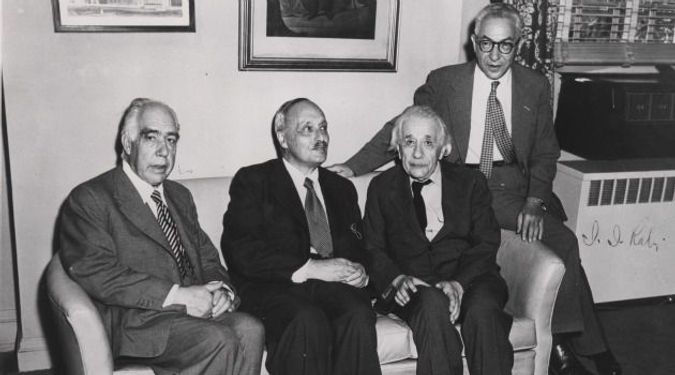 Meeting of Minds: Scientist James Franck, second from left, sits with Niels Bohr, left, and Albert Einstein, second from right, with I. I. Rabi on the far right-hand side.

James Franck, a Jewish scientist who was born in Hamburg, Germany, and was a co-winner of the 1925 Nobel Prize in physics, is honored by The University of Chicago’s James Franck Institute and by the James Franck German-Israel Binational Program, hosted at five leading Israeli technical schools. Yet nothing commemorates the work Franck did inside Germany, as we learn from a 2007 biography, “Aufrecht im Sturm der Zeit” (“Rectitude in Tempestuous Times”) from GNT-Verlag.

In the work’s recent translation, “Science and Conscience: The Life of James Franck” from Stanford University Press, author Jost Lemmerich points out, “There is no institute bearing his name, no scientific award in his memory.” This is a particularly cruel irony, since Franck’s most remarkable distinction may be that on a human level, he was even more saintly than his friend and colleague Albert Einstein, and among the beneficiaries of Franck’s saintliness were Germans in the postwar era.

A physicist and historian of science, Lemmerich quotes correspondence between Franck and Einstein to this effect. A careful translation by Ann Hentschel, “Science and Conscience” details how Einstein and Franck, although both Jewish refugees from Nazi Europe, differed greatly on the very Jewish issue of rakhmones, (compassion,) in their treatment of Germans who were not Nazis. 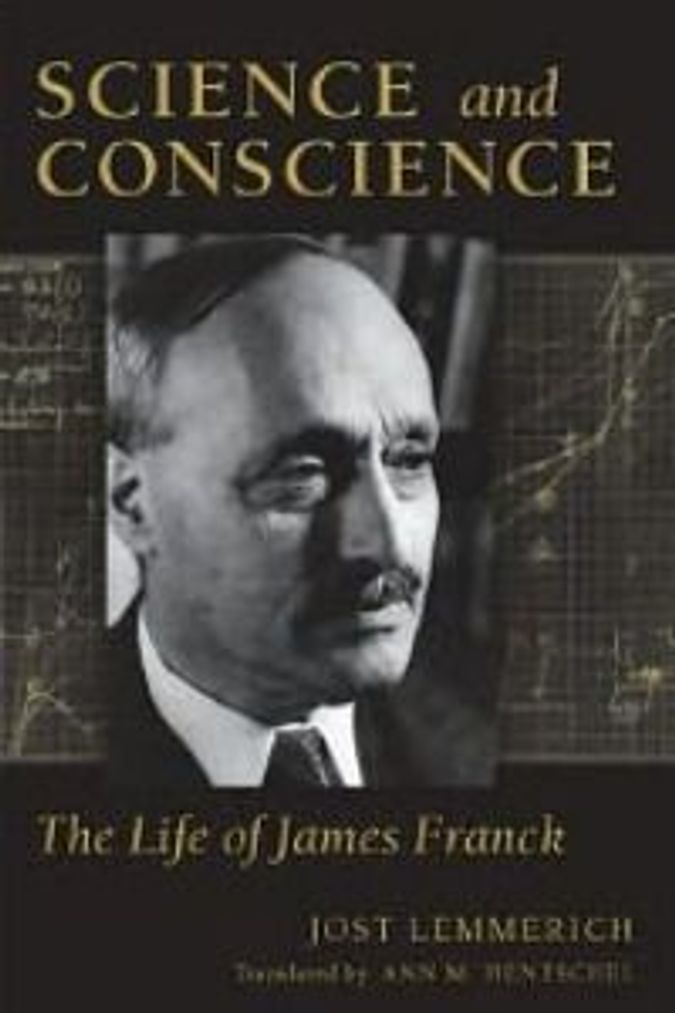 In December 1945, Franck wrote to Einstein, calling him “a kind of Jewish national saint.” He asked for Einstein’s support for a public plea to the Allied victors not to indiscriminately punish Germans for Nazi crimes. “The feeling of revenge is, of course, strong in Jewish circles,” Franck wrote. “If that goes on, the Nazis will have won in their battle for demoralization of the whole world.” He added, “I do not intend ever to set foot in Germany again, because I do not want to come into contact with people who have said yes to Nazism, but I will have no part in the punishment and gradual elimination of the innocent.” Einstein’s reply was swift and unequivocal:

The Germans slaughtered millions of civilians according to a carefully conceived plan in order to steal their [jobs]. They would do it again if they could. The few white ravens among them changes absolutely nothing…. Dear Franck! Keep your hands off this foul affair!

Franck did drop that specific appeal, although he replied to Einstein: “The endeavor for a greater influence of ethical morality must not be given up; if the Nazis have robbed from people like you the belief that there is a sense in supporting this, then they have simply won.” His still-cherished ideals were also expressed in a 1947 letter to his friend, the German chemist Karl Friedrich Bonhoeffer, older brother of anti-Nazi Lutheran theologian and martyr Dietrich Bonhoeffer. Franck opined that “Hitler’s total war… whipped up so many bad instincts that it will take a while for the whole world to be able to learn more healthy ethical compassion again.”

Franck’s courage in confronting Einstein was the product of long years of experience described in “Science and Conscience.” Not giving in to vindictiveness, however justified, was part of Franck’s definition of keeping the faith. This began during his World War I military service, which commenced shortly after he made the discoveries that would win him the Nobel Prize, shared with his German-Jewish colleague, Gustav Hertz, for pioneering contributions to the understanding of how electrons, atoms and molecules interact. Franck volunteered for combat in 1914, whereupon a superior officer explained that Franck would be eligible for the officers’ training school if he agreed to be baptized. Franck responded by asking “whether he would be a better officer if he were to be baptized against his convictions.” Bypassing training school, Franck was nonetheless promoted to lieutenant and eventually awarded the Iron Cross First Class.

His war hero status became especially significant after Hitler’s rise to power in 1933, after which Jews were dismissed from university posts with the temporary exception of Jewish World War I veterans. Amid already visible anti-Semitic public campaigns, Franck righteously refused to enjoy privileged status and resigned his own professorship at the University of Göttingen because of the Nazi “attitude… toward German Jewry,” as he declared in an open letter to the Prussian minister of the arts, sciences and cultural affairs. A local Nazi newspaper reacted with a letter signed by 42 Göttingen lecturers decrying Franck’s gesture as “tantamount to an act of sabotage.” Franck’s action notably differs from some other Jewish colleagues, such as the mathematician Richard Courant, who, Lemmerich writes, took “every possible measure to be able to stay at the university.”

Amid the turmoil, Franck explained himself to another friend, surgeon Max Neisser, who had also resigned, albeit quietly, at the same time: “My decision for publicity… was in order to give many young Jews the feeling that they were not simply being left in the lurch.” Indeed, Franck’s Jewish and even his non-Jewish students admired his courage, sending him a statement of solidarity that they dared not sign, given the political climate. The Hungarian-Jewish scientist Michael Polanyi wrote to Franck: “As long as Jews exist, what you have done to save their honor will not be forgotten.” Yet soon Franck would be on the road to exile, first as a guest at the Copenhagen, Denmark, laboratory of physicist Niels Bohr. The physicist had praised the “wonderful experiment by Franck and Hertz,” which provided a basis for Bohr’s groundbreaking theory of the atom.

Despite the Danish welcome, Franck confessed in a letter to friends that he was suffering from the psychological stress often found in exiles, forgetting “one thing after the next… I’m constantly feeling as if on a voyage and am mentally still waiting for the finality of routine order.” In 1935, Franck’s ongoing voyage would take him to Baltimore’s Johns Hopkins University, where he taught briefly but was refused the usual retirement pension. Lemmerich explains that the Johns Hopkins treasurer’s “anti-Semitic bias” played a role in this refusal. Before relocating to the less anti-Semitic University of Chicago, Franck found solace in the poetry of Heinrich Heine, as he wrote in 1935 to a friend and fellow physicist, Hilde Levi. He especially empathized with Heine’s lyrical lament of exile, “Denk ich an Deutschland in der Nacht / so bin ich um den Schlaf gebracht.” (“When I think of Germany at night / I cannot sleep.”)

As the war drew to an end, Franck was among those scientists who unsuccessfully advised America’s government that before using the atomic bomb on Japan, it would be wiser to stage a demonstration in an unpopulated area as a dissuasive effort. Despite the failure of his American-based campaign for mercy toward Germans who were victims of Nazism, Franck had no postwar sympathy for Nazis. In 1947 he refused a university job in Heidelberg, mentioning the enthused Nazis who still thrived in Germany: “As a man unwilling to forget his Jewishness, I cannot lend a helping hand.”

Yet his strongly held belief in ethical compassion encompassed non-Jewish colleagues like his fellow Nobel Prize-winner Max Planck, who told Franck in 1935 that he had canceled any trips to conferences abroad because as a representative of German science, “now I would have to hide my head in shame.” Franck, who died on a visit back to Göttingen in 1964 at age 81, is the epitome of a compassionate thinker whose achievements and extended hand to postwar Germany are overdue for official commemoration and a returned hand from his native country.