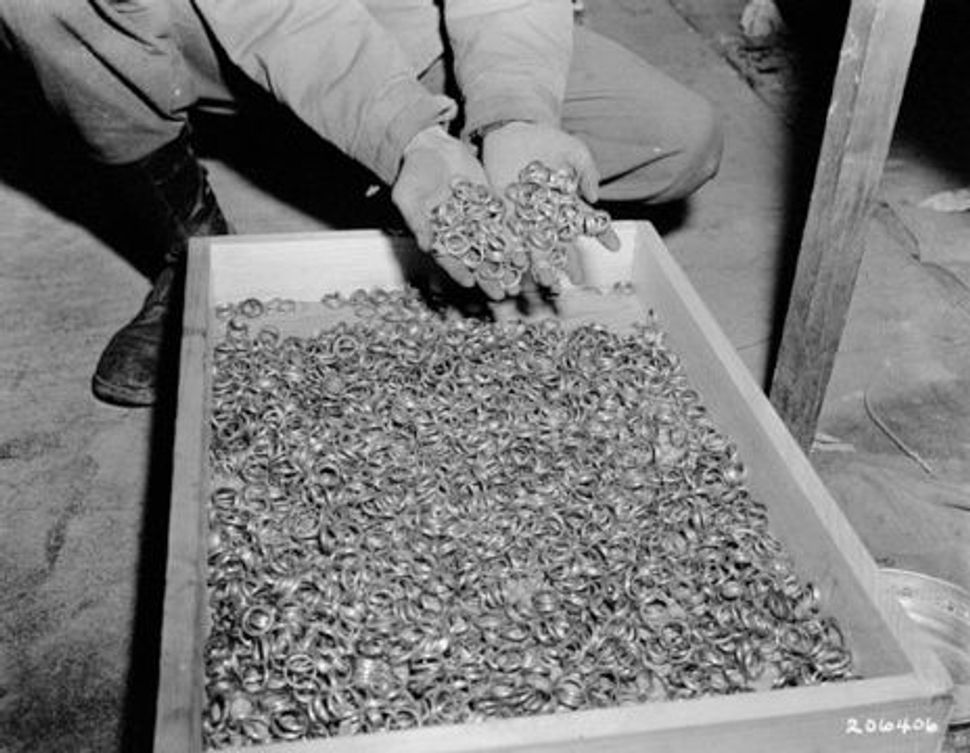 Every person has a unique history but the stories of those who endured and survived Hitler’s hell are not only singular but exceptional; a survivor’s past encompasses mysteries of a thousand and one horrors which would require many lifetimes to recount. My friend Lily herself stood at the entrance to the gas chambers, praying for an easy death. But she was spared, not because she was so unusually beautiful or clever or talented, but because the Angel of Death is a capricious character; his nature is such that, should he be standing head to head with his victim, when the mood strikes him he can whisk around and take off without so much as a “by your leave.” And so it was in Lily’s case. There she stood, trembling at the door of the crematorium, when suddenly she was told to get dressed and go back to the barracks. It was her destiny to live.

My friend Lily’s velvet gray eyes still reflect her one- time youth, belying the crown of snow white hair which sits atop her shapely head. The eyes twinkle with the miracle of life. One recent evening I could sense a restless soul dwelling behind that winsome smile; we had been talking about love, and she had promised to tell me about her first experience with love and how the plot had unfolded. Lily began this story from her “Thousand and One Nights” of horror tales:

We were five sisters at home. My mother was considered a great beauty in our town, and her daughters were also much admired, each a “femme fatale” in her own right. When we went walking in the park, there was not a single pair of eyes that didn’t follow us — especially those of the young men. We were well known, with a magnificent house and maids and servants. Father always brought us the most beautiful hats from Venice, and for Mother he would also bring silks and suede from Paris for her dresses. I was not even sixteen when a young fellow started milling around my sister. He, too, was from a formidable family, rabbis, judges and businessmen. He helped run his father’s business, and had cast his eye on my eldest sister.

The young man, handsomely decked out in the latest style, had mapped out the times when we strolled in the park and greeted all of us chivalrously. My sister would modestly lower her eyes, knowing that she was the object of his interest. Mother noticed that there were romantic glances being exchanged here, but she wasn’t sympathetic. First, his family spoke Yiddish, and we had been raised in the Hungarian style; only on the Sabbath did Father insist we speak Yiddish at the table. Also, the boy’s family prayed in an orthodox synagogue, and we attended a modern one where even the Cantor spoke Hungarian. The fellow was persistent and ran to see the Cantor in an attempt to explain the situation to him, namely that he was head over heels in love with the daughter of the best known family in town.

Our Cantor was not averse to playing match-maker, and so it was. He reconciled the parties, and the match was agreed upon. A most beautiful wedding was celebrated, and the happy pair settled into a house near ours. Soon a son was born, and you can readily understand that he was the crown prince of our family. His every movement was spectacular, every laugh cherubic, and each word brilliant.

No one knew what lay in wait for us, that the Angel of Death was already lurking in the shadows sharpening his teeth. When the little boy was three years old, the Nazis marched into Hungary. We all gathered in my parents’ house and decided that we would wait out the war together there. But that was not what came about. The Hungarian Nazi gendarmes surrounded our house and gave us an hour to pack our things and to follow behind them. Everyone grabbed a pillow, a blanket, a towel — whatever was at hand.

That black day fell on the eve of the Sabbath. Mother stayed calm and grabbed the Sabbath candles just as we were leaving the house. She lit the candles on her knees, using the dripping tallow to secure them to the steps of our house. Wrapped in her elegant Sabbath shawl, my mother recited the blessing over the lights. We all positioned ourselves around her, as if to form a magic circle. The Hungarian gendarmes locked the door of our house and ordered us to follow behind them. We took to the road, not knowing where that road would lead us. I kept looking back, straining to see whether the Shabbos candles were still burning. They flickered and fluttered in the wind with waxen tears until they were slowly extinguished on the last step of our house. This is a picture which will stay with me forever.

We entered the Ghetto and were told that we were to be detained there until wagons arrived to move us along. And so we passed many weeks in the Ghetto. All of a sudden my eldest sister approached me and said,

“Lily, I want you to hide my wedding ring. I have a feeling that the child and I will not get out of here alive.”

I trembled all over and scolded her,

But my words were of no avail. She forced me to conceal her wedding ring.

“The ring will be your lucky charm. It will help you to live through the war.”

In the meantime, I had become acquainted with a young man in the Ghetto. Victor was his name, a sensitive youth with mild features, who never took his eyes off me. No matter where I wandered, he managed to be there. We talked and talked and, inevitably, fell in love. We understood, of course, that our love held no promise of fulfillment and that our fate rested in the hands of the murderers. One evening when we had finished our work assignments, he looked at me gravely as though something was gnawing at his insides, and said,

“Darling Lily, who knows if we will ever meet again? Perhaps, in the next world.”

I comforted him and scolded,

“Why do you speak that way? No one knows when his day is up!”

Victor was wearing a bedraggled raincoat and a white scarf around his neck. Suddenly he ripped off a button from the worn coat and handed it to me.

“Hide this as a reminder of me. Maybe it will be your good luck charm. And if we outlive this hell, we’ll be married. Remember, Lily.”

His words reminded me of my sister’s wedding ring. I quickly pulled it out of my pocket and handed it to him.

“Here, take this.” I gazed into his mournful eyes. “A lucky charm. It’s my sister’s wedding ring. If we survive the war, we’ll be married with this ring.”

He gazed at the lovely golden wedding ring for a long while, kissed it and concealed it somewhere deep in the folds of the rain coat. From that time on, we didn’t see each other. The trains carried us to Auschwitz from where it was rare for anyone to emerge alive. But in my case, a miracle occurred. I was standing outside the gas ovens when an order came for us to return to the barracks. With one word, I was delivered, barely managing to escape with my life, barely able to drag myself back to my home. Our house remained standing in the same place, and in the interim my brother and one of my five sisters had returned, also by some miracle escaping with their lives. We clung to each other and took to waiting. No one came back any more — not my father and mother, not my sister with her child, not the other sisters. No one.

Suddenly, the door opened and my brother-in-law, my eldest sister’s husband, entered. He had contrived to save himself in one of the labor camps. We sat together and waited. A month passed, then a year, and nobody came back home. I thought about the young man in the Ghetto with whom I had shared my girlish young heart, but there was no sign of him. We in-laws remained orphaned, as if our pulsing limbs had been severed. What drew us together was the catastrophe. We cried over our loved ones day and night. Finally, my brother in law said, “Lily dear. Who knows better than you how much I loved your sister and my marvel of a little boy? But look at what life has dealt us — tragedy and pain. How long will we sit here mourning? While we are still young we must set about building a new life. I propose that we marry and begin again together.”

It was as though I had been struck by thunder. But I knew that my young man was not going to return any more. I looked up to my brother in law; he had a store of wisdom that astounded us. I consulted with my sister and brother, and they encouraged me to marry him. What can I tell you! There was a wedding, and immediately we began planning how to flee from that bloody continent.

Exactly a week after the wedding, the doorbell rang. I opened the door, and before me stood Victor, the boy who had sworn his eternal love to me. My heart fell. He wrapped me in his arms and began kissing me. He was beside himself with joy, crying and laughing at the same time, not knowing how to cope with such great good fortune after having endured so bitter a calamity. From his pocket he extracted my sister’s wedding ring and held it out to me with these words:

“This was my lucky charm. I survived the camps and was liberated, but I lay in the hospital for many months before I became fully conscious. And all that time your face floated in front of my eyes, and my soul clung to life because of your shining image.”

He was unaware that I was almost ready to faint, that my head was spinning, that I couldn’t catch my breath; my husband stood near without a word.

When Victor had calmed down somewhat, I led him to the sofa with trembling hands and told him that I had gotten married just the week before. A dark cloud engulfed his delicate countenance. He stood up as if driven by demons, left my sister’s wedding ring and slammed the door behind him.

My husband held me in his arms and comforted me.

“Lily dear. I can free you in a minute. Just say the word and I’ll give you a divorce.”

Eyes brimming with tears, I caressed him.

“Don’t you understand, you foolish man? My sister, your wife, would have wanted us to stay together.”

He kissed my hand and placed my sister’s wedding ring on my finger, in memory of both our loves. And we knew that it must be so.