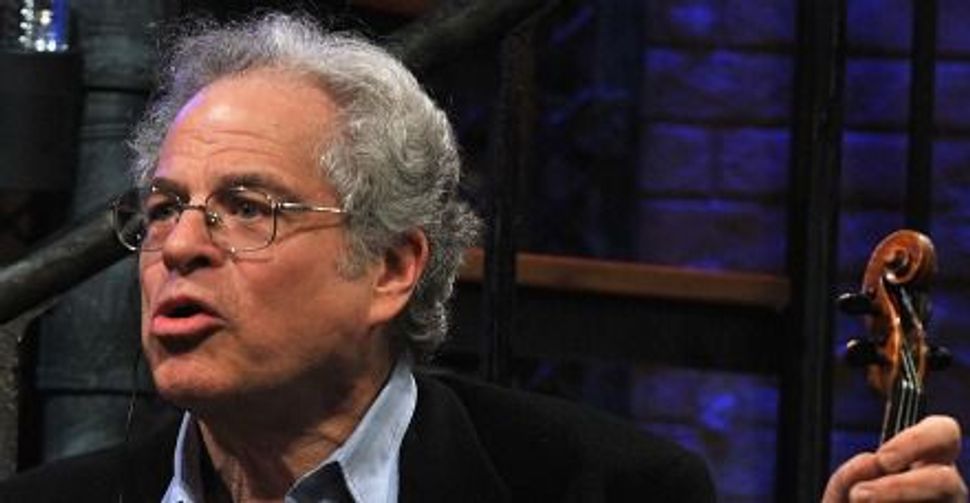 Itzhak spoke to Yitzchok in Hebrew. Hankus spoke to Yitzchok in Yiddish. The conductor made puns in English with a heavy accent that is Australian and South African. And this all happened in the studio where Bruce Springsteen recorded “Born To Run” and Madonna laid down her vocal tracks for “Like a Virgin.”

We’re talking, of course, about Itzhak Perlman, Cantor Yitzchok Meir Helfgot, Hankus Netsky of Boston’s Klezmer Conservatory Band and conductor Russell Ger, who is Helfgot’s musical director at Manhattan’s Park East Synagogue. In early December, they were joined by a 20-piece chamber orchestra composed primarily of the violin virtuoso’s former students and several members of KCB to record a new album of cantorial and Yiddish music at Avatar Studios, in midtown Manhattan.

In this podcast go behind the scenes at Avatar Studios, as Perlman and Helfgot record their new album:

Fans will have to wait till next year for Sony Music Entertainment to release the record, as well as for the performers’ accompanying tour. But after spending several hours in Avatar’s studio and control room, I suspect the wait will be worth it. So far, there have been just two performances of this material: one during a menorah-lighting ceremony at the White House last year, and another in March at a theater in Los Angeles, under the name “The Soul of Jewish Music.” According to the L.A. Times, the latter was “a juxtaposition of concert-hall dignity and mad populist exuberance.”

Asked how the week of recording went, Netsky, who is serving as musical director and co-producer of the new album, told the Forward, “It’s beyond anyone’s expectations.”

Perlman was gregarious, cracking jokes and chatting with members of KCB, with whom he has toured in the past, and with his former students, whom he personally selected for the recording.

Helfgot, for his part, needed a prayer book at one point, to go over the lyrics for a cantorial piece. No one present had one, but it turned out that the musicians’ union representative, an observant Jew, called someone, who dictated the lyrics over the phone.

Netsky, who teaches jazz at Boston’s New England Conservatory, has been on two klezmer tours with Perlman. But he says that unlike the great violinist’s forays into klezmer, this album, which is described as half cantorial, a quarter klezmer and a quarter Yiddish folk songs, is different, because Perlman grew up in Israel listening to cantorial music and is steeped in its tradition.

“He’s the one who has the big connection to opera, and so he really understands hazanus as Jewish art music,” Netsky said. “That’s really the key, to understand that cantorial music is not only our artistic tradition, it’s our theatrical tradition.”

Netsky noted an observation of his to the writer working on the liner notes for the album: “In my grandfather’s generation, I don’t think there was a Jew who didn’t know these pieces. In our generation, nobody knows these pieces.”

The repertoire of the Yiddish theatrical tradition is something with which Helfgot was unfamiliar. The Israeli-born cantor is a Ger Hasid. And Hasidim, for the most part, don’t know from Second Avenue. Netsky said that Helfgot had never heard of Abraham Goldfaden, the father of Yiddish theater, but when he threw Goldfaden’s “Shoyfer Shel Meshiekh” (“The Shofar of the Messiah”) into the playlist, Helfgot loved it.

Helfgot’s tenor clearly impressed engineers in the Avatar control room. “He’s got this voice that just stuns people,” observed Ger, who met the cantor in 2005, when Helfgot was on tour in Australia.

Though the accompanying musicians are no slouches themselves, there was no mistaking the world-class musicianship of Perlman. At the conclusion of one passage, he launched into a fast-tempo solo. But the engineer needed some silence at the end of the passage preceding the solo for editing, so a number of additional takes were recorded without Perlman playing the solo. When it was apparent that they had a “keeper,” the silence gave way to applause and to the assembled musicians’ exclamations of “Wow.”

The chamber orchestra musicians that gathered for the recording sessions seemed to be enjoying themselves, on one occasion breaking into what Netsky described as “a hilarious virtuosic duet” that Perlman does with the great violinist Pinchas Zukerman. And the orchestra laughed at their teacher’s puns, some of which were followed by a rim shot sound effect, courtesy of KCB’s percussionist, Grant Smith. At one point, Perlman requested “No more tuning,” then added, “As they say of the sandwich, ‘We’re out of tuna.’” Rim shot. “You don’t like that pun?” the violinist asked. “Let’s can it.”