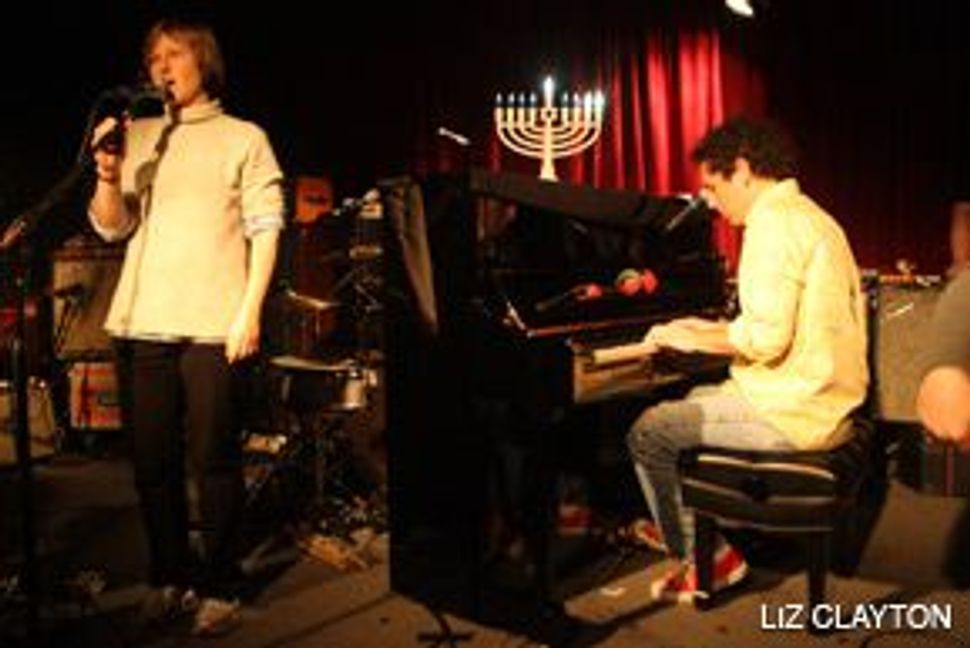 Night falls on Hoboken and candles light for the sixth “8 Nights of Hannukah with Yo La Tengo” at Maxwell’s. Although the Hanukkiah is upfront and proud, this is no Matisyahu concert — not least because musician Ira Kaplan’s mom had to correct the arrangement of the lit candles. But musically too — from the lugubrious post-folk aesthetic of The Magnetic Fields to the urbane stand-up of John Hodgman to the energetic indie eclecticism of Yo La Tengo — these performers are, like their audience, secular and older. 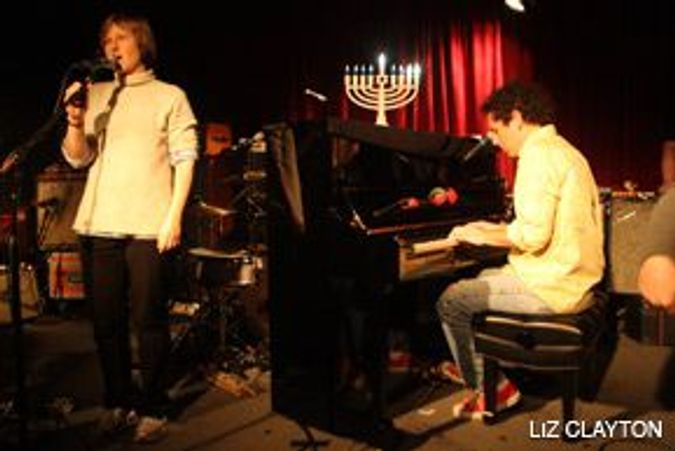 Kaplan, part owner of the venue, co-leader of the headlining act and inventor of this particular “8 Nights” tradition (in which a celebratory concert is held on each night of Hanukkah) bounces up to the stage with red Converse sneakers and an energy that belies his 50 years and lived-in looks. He is comfortable here, at home with who and where he is and what he’s doing. When he welcomes us and the guest artists, it’s not a platitude — this is his place and he’s glad we are here. Of course, he’s glad we’re supporting the two Burmese charities that will benefit from the concert’s proceeds. But mostly, he’s just to have us here to share in the music.

The Magnetic Fields play a typical lyrically refulgent set. The prodigiously talented and equally prodigiously depressing Stephin Merritt is, however, in a relatively optimistic mood. He and Claudia Gonson play “Marry Me” after the comic paeon to marital misery, “Yeah, Oh Yeah,” suggesting that even in the face of strife, it’s worth getting hitched. None of Yo La Tengo’s guests over the course of Hanukkah are pre-announced and the audience can’t believe the luck of the dreidel spin that brought The Magnetic Fields in to play, on such good form.

The four performers have accepted Ira’s welcome. They are settled, even in the cramped space. They remind us that mature lyric-writing and musicianship can elevate three-minute pop songs beyond the level of high school inanity. As with Henri Cartier-Bresson on a postcard, or the best Broadway musicals, the songs reflect the human condition in snapshot. There is earnestness, achingly so in “As You Turn To Go,” and there is a country feel to “Papa Was a Rodeo,” but laced throughout there is good humor and wit.

Hodgman, as seen on TV, is the unannounced comedic guest of the night. He wanders onstage and apologizes for his lapsed-Catholic roots. Ostentatiously sipping on a martini (whose glass stands by the Hanukkiah), he proceeds to explain that, growing up in Brookline Mass., he has enjoyed plenty of Hanukkah parties before. He wishes us all a happy holiday before moving on to explain the Germanic pagan roots of Christmas trees and to sing (accompanying himself on ukelele) a funny sexy version of “Santa Baby.” Although amusing enough not to be a disappointment, he is nevertheless a delay before the main attraction.

Finally, Yo La Tengo is on. Ira Kaplan is in prime form: one minute mouthing the tender words of a ballad, the next jerking like a spastic puppet tied to the strings of his own music. Anchoring him in innumerable ways, as usual, are Georgia Hubley and James McNew. Between numbers they run to occupy the new positions and new instruments for the next song as if a break in the music would cause some unspecified, but catastrophic, rupture in the cultural continuum.

Their set, like their oeuvre, runs the gamut — loud, soft, tender, angry, simple, complex, short songs, long songs, — and they take the audience with them wherever and however they go. They are famous for their covers and, although they cover both Gershwin and Berlin songs (“mining the old Jewish songbook more than usual” as Ira puts it), the real successes are the self-covers: making whole new versions of their own songs.

As they set up Ira tells us that “the non-earplug part of the evening ends in three minutes” and the set begins with a quiet version of “The Weakest Part.” From there they move on to the hectic rock of “Big Day Coming” and, later, a superfast version of “Watch Out For Me Ronnie.” It’s late, it’s cold and the toilet is a long way from the music but no one is worried about that anymore. “Sometimes I Don’t Get You” mirrors some of the tender lyricism left over from The Magnetic Fields and some of that band are invited up to play for certain numbers giving the whole evening an old-time feel of musicians around the piano joining in, except with some fierce drumming and crazy guitars.

The climax of the set and the evening (overshadowing the mainly disappointing encores) was the 15-minute version of the already-long “The Story Of Yo La Tango” (yes, Tango) On the album (“I Am Not Afraid of You and I Will Beat Your Ass,” 2007) Ira’s electronic guitar loops appear out of nowhere, but here we see him painstakingly derive them. He, and then the whole band, builds upon the loops slowly and then ever faster until the crashing crescendo is on us before we know it. They seem to have been on stage for only 10 minutes but, miraculously, it’s been 80!

Passing Merritt and Kaplan at the bar on the way out, I am surprised at how short they both are. All that matters though, is the stage and there they were nine feet tall. It isn’t about size, it’s about attitude and perseverance: It is the rock of ages and the oil that endure. These are not beauties, these are not gimmick-peddlers; these are musicians who have honed their skills with time and an experience you can hear, keeping tradition at hand but, unlike the Stones or other purveyors of kitsch, always moving on. As if to prove it is a time for celebrating perseverance the closing song, “My Little Corner of the World” is sung by Ira’s mom, not virtuosically, but beautifully. Time to go home.