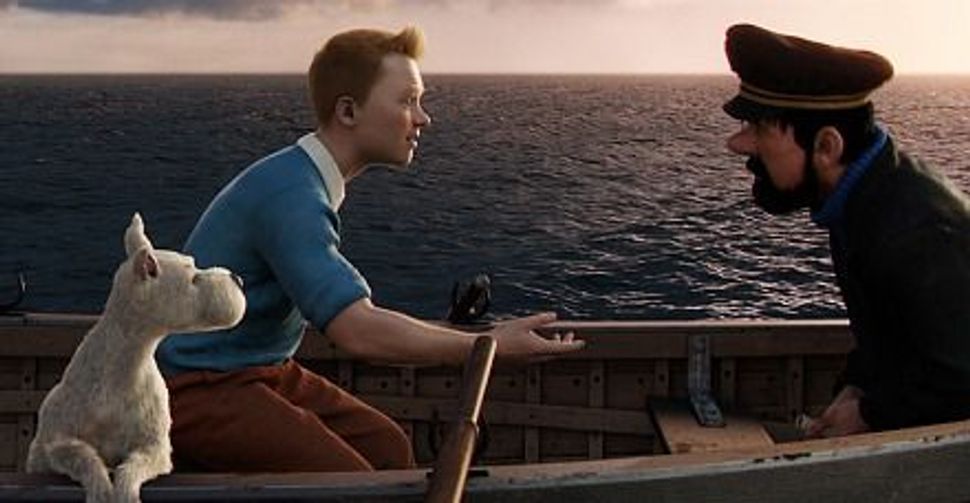 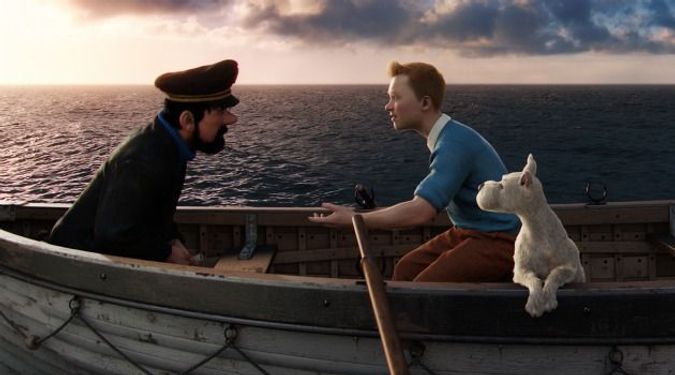 Cartoon Hero: Tintin is nothing but an upright cartoon hero. But what about his Belgian creator, who has a history of anti-Semitism?

The setting: a tiny monarchy, poor but beautiful, on the Balkan Peninsula. The population is a mere 642,000 people, mostly peasants. The country’s main exports are wheat, mineral water, firewood, horses and violinists.

The scene: A ruffian has stolen the king’s scepter, but is caught just steps from the border. Documents are found in his pocket revealing a planned invasion by the neighboring fascist state. He belongs to a fifth column called the Iron Guard. Its leader’s name is Müstler. 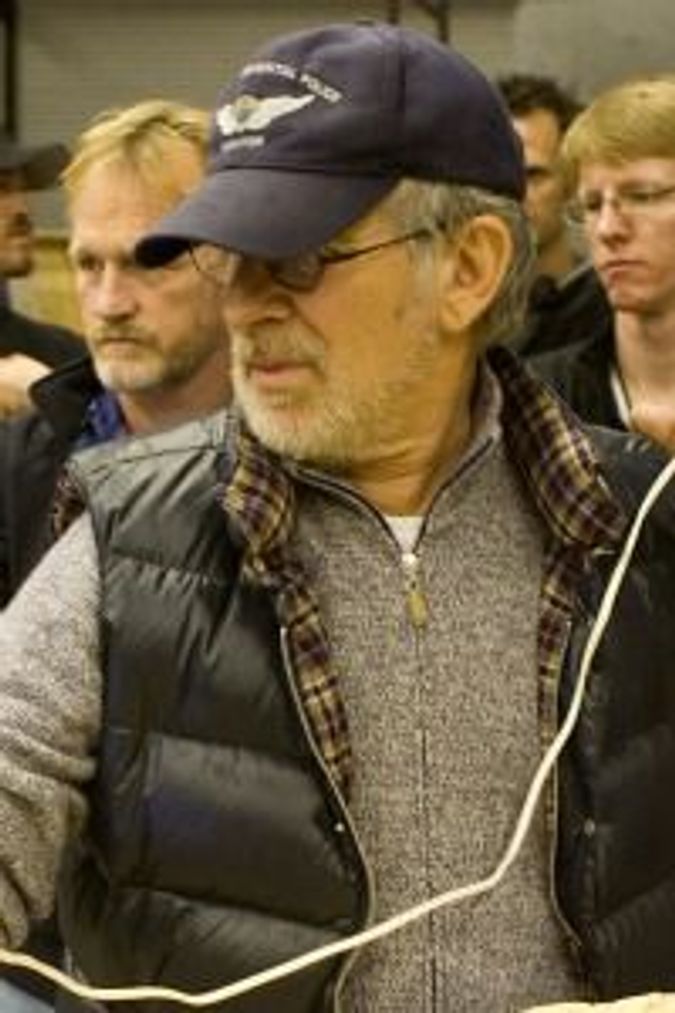 Steven Spielberg works on the set of ?Tintin.?

The country is Syldavia, a fictional creation of Belgian cartoonist Georges Remi in “King Ottokar’s Sceptre,” the eighth adventure of Tintin, boy reporter. In previous exploits Tintin battled gangsters in America, explored the pyramids in Egypt and became the confidant of Latin American revolutionaries. In coming years he would find the Yeti in Tibet, escape from a live volcano and go to the moon almost 20 years before the actual 1969 moon landing. Not least, he would go on a hunt for pirate treasure with his friend Captain Haddock, an adventure that, thanks to Steven Spielberg and 3D motion capture technology, is now on screens everywhere.

But “King Ottokar’s Sceptre” had a special significance. Though Syldavia was modeled on Albania, other historical parallels are evident. Remi — or Hergé, to use his nom de plume — identified the story as a “failed Anschluss,” recalling the 1938 annexation of Austria by Nazi Germany. Like all Tintin adventures the story is humorous and high-spirited, ending with our tuft-haired hero’s triumph and, in this case, his investiture with Syldavia’s Order of the Golden Pelican. But despite the good cheer, the condemnation of German expansionism shines through.

Hergé’s own stance was not so simple. Following the fall of Belgium in the summer of 1940, and after serving briefly in a Flemish infantry unit, Hergé accepted a job at the collaborationist Brussels newspaper Le Soir. (After the war he was arrested — four times — for collaboration.) Not only did his drawings appear alongside Nazi propaganda, but his next Tintin book, “The Shooting Star,” featured a hook-nosed, cigar-chomping financier named Blumenstein, who tries to subvert a scientific discovery for personal gain. The name was later changed to Bohlwinkel and the character’s country moved from America to the fictional São Rico, but the anti-Semitic implications of the caricature remained.

Of course, anti-Nazism and anti-Semitism were never mutually exclusive. But the problem posed by Tintin goes deeper than Hergé’s questionable World War II alliances. His first Tintin comic, “Tintin in the Land of the Soviets,” was a crude piece of anti-Soviet propaganda created for Le XXe Siècle, the right-wing Catholic newspaper whose children’s supplement, Le Petit Vingtième, Hergé edited for 12 years. His second book, the colonialist “Tintin in the Congo,” is even worse. Its depiction of Africans as childlike primitives has made some readers try to ban it from libraries and bookstores. In one panel an African woman bows before Tintin, exclaiming, “White man very great. White mister is big juju man!”

These episodes are confounding because, unlike his creator, Tintin is never a racist. In fact, his appeal rests on his inhumanly decent character. Tintin is good. Tintin is incorruptible. Tintin cannot be threatened or bribed. Tintin does not drink or smoke. And who could resist his checked plus fours and charming coif?

Tintin is also a perpetual defender of the oppressed. He bears witness to the plight of Native Americans who are evicted from their land, and he stands up for Chinese peasants against Japanese and Western imperialists. He stymies multinational corporations that would provoke war to get their hands on another oil field, and he frustrates unscrupulous arms dealers who would sell weapons to both sides. Together with his trusty dog Snowy he foils international drug smugglers, counterfeiters, gunrunners and modern-day slave traders. In the new film he helps catch a pickpocket and recovers Haddock’s family honor. How could the creator of such a paragon have been a racist?

Hergé’s transgressions have vexed Tintinologists for years. They are often explained by apologists as youthful follies stemming from a naïve acceptance of contemporary mores. Hergé himself claimed as much. In a lengthy 1975 interview with the French writer Numa Sadoul, he said: “I was fed on the prejudices of the bourgeois society in which I moved… I only know things about these countries that people said at the time…” It is easy to imagine that the Nazi occupation had a similar effect on Hergé’s outlook.

This explanation may seem like a pettifogging excuse, but in fact it is a damning indictment. It indicates not only a disturbingly acquiescent sense of morality but also, for a creative artist, a stunning failure of imagination.

Though some critics have tried to claim the Tintin comics as great works of literature, they are not. Despite their charms, they contain no three-dimensional characters. Rather, Hergé worked with types, albeit entertaining ones. Tintin is the pure Boy Scout hero. His mate, Captain Haddock, is an irresponsible but loyal drunk. The detectives Thomson and Thompson are bumbling slapstick nitwits. The famously deaf Cuthbert Calculus is the brilliant but slightly mad professor. In all these cases, Hergé’s characters are both refreshingly new and comfortingly familiar. But when it came to presumed racial characteristics, Hergé’s reliance on type backfired disastrously.

Yet Tintin has his attractions, besides his own unimpeachable character. Hergé’s ligne claire drawing style, in which all lines are given equal weight and all colors equal shade, has a certain modernist ésprit. Though Tintin’s adventures start in the late 1920s, his gusto (not to mention his wardrobe) belongs to the first part of the century — a time of technological creativity that, until the carnage of the First World War, seemed to promise a boundless future.

With this unclouded spirit it’s no wonder that Tintin’s popularity endures. To date, the books have been translated into over 50 languages and adapted into films, TV shows, exhibits and plays. There is a raft of Tintin paraphernalia for the discerning collector, from original copies of Le Petit Vingtième to Christmas ornaments to a 70-piece set of model cars whose originals are featured in the comics. He is even on the stamps of four different countries and a special edition of the 10-euro coin.

In his latest big screen incarnation, Tintin is both a disappointment as well as a great success. The plot of the movie is based primarily on “The Secret of the Unicorn,” but it weaves together original elements with bits of other volumes. Unfortunately, the stitching shows. Poor pacing and the elision of large chunks of the story leave the ending anti-climactic, and the overuse of action scenes doesn’t compensate for weaknesses in the plot. Chasing haphazardly from one country to the next was a prominent feature of early Tintin, when the books were produced first for weekly or daily newspaper publication, but Hergé later refined his plot structures, and the screenwriters should have done so as well. And Spielberg, being Spielberg, couldn’t help sticking in a family drama, a difficult feat in a story with an all-bachelor cast of characters.

But the motion capture technique does a surprisingly good job of translating Hergé’s aesthetic onto the big screen. Despite a number of scenes being thrown together in a disjointed way, it’s a pleasure seeing many episodes redone verbatim in the new medium. However murky his past, Tintin carries on undaunted.