The Return of Menachem Mendel 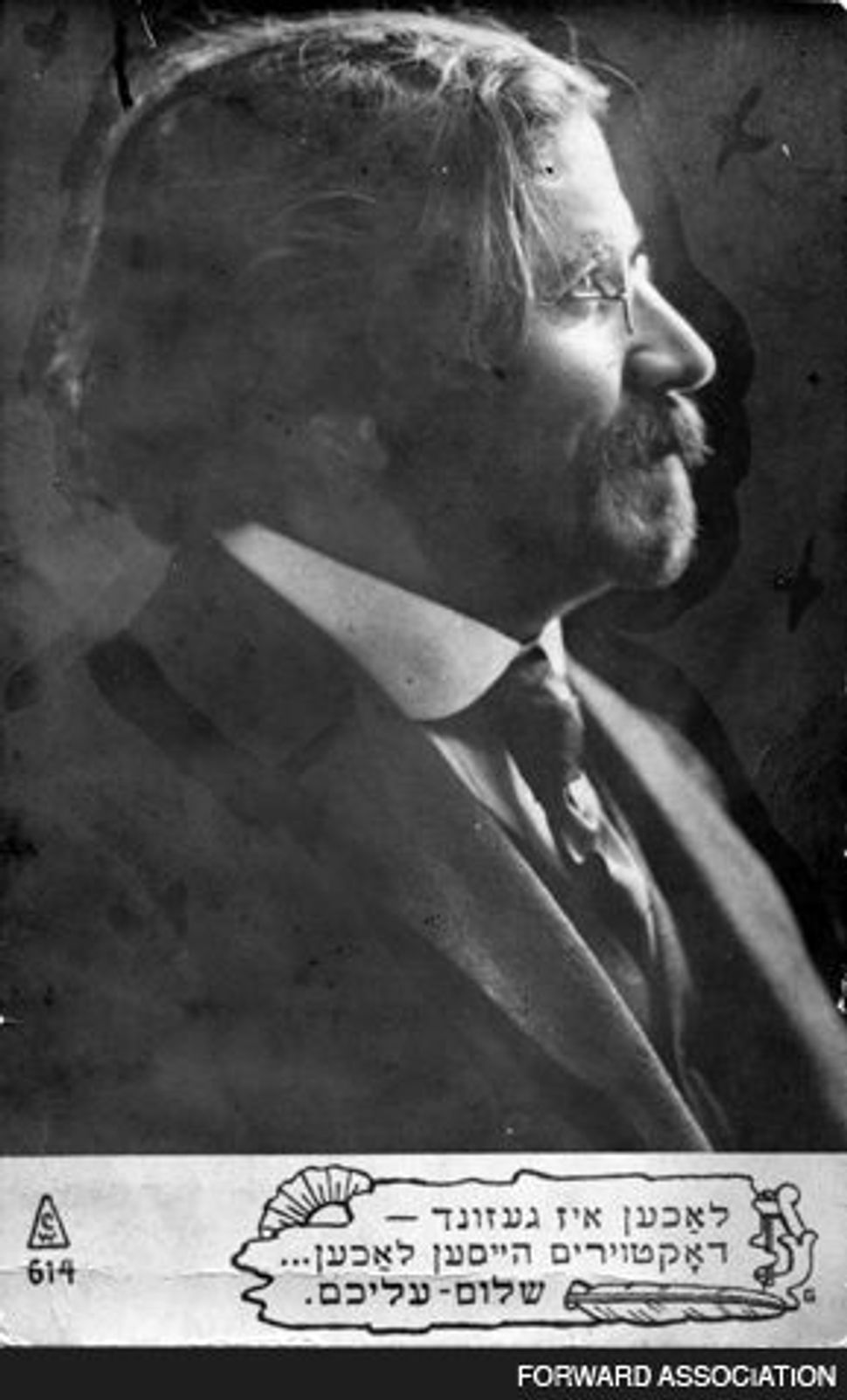 LAUGHTER IS THE BEST MEDICINE: Doctors may prescribe it, according to Sholem Aleichem, but bankers are yet to be convinced.

In a period of economic hardship, such as the one our country has entered, I find myself turning to Sholom Aleichem for consolation. His characters, particularly Tevye the Dairyman and hapless stock investor Menachem Mendel, suffer serious financial losses in Sholom Aleichem’s stories. But the author responds to their condition with great humor, and provides readers with a sense that this, too — the losses and trials of hard times — will pass, although right now they have returned in new form. 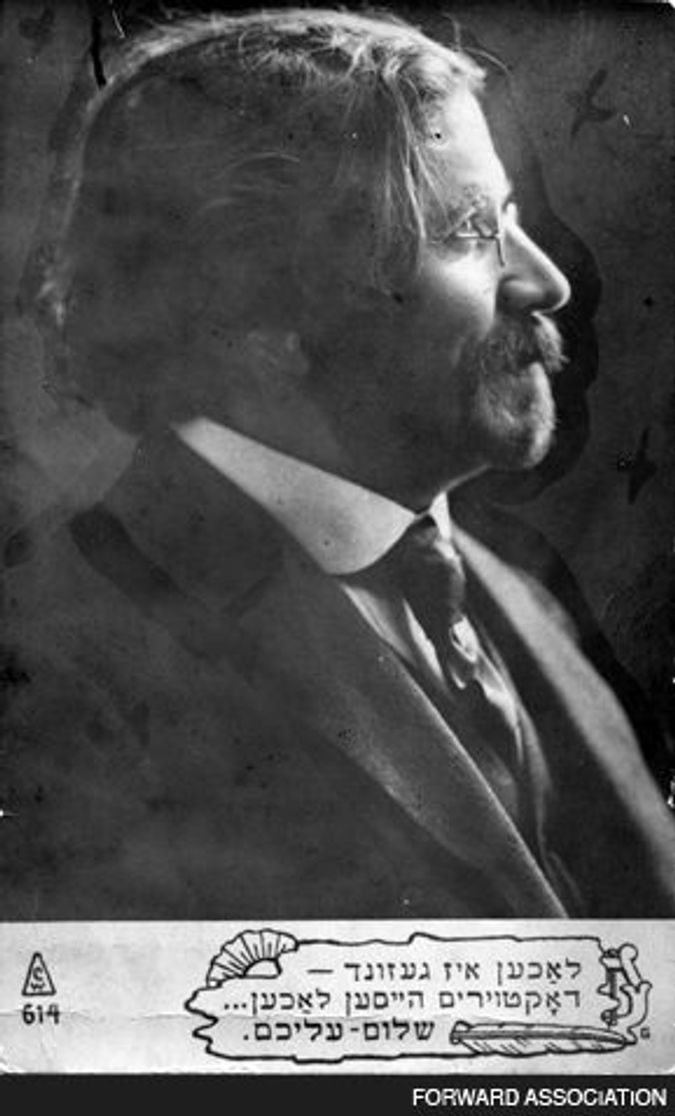 LAUGHTER IS THE BEST MEDICINE: Doctors may prescribe it, according to Sholem Aleichem, but bankers are yet to be convinced.

The comic Yiddish stories that Sholom Aleichem wrote a century ago reflected his own response to the suffering that Jews and others endured in Eastern Europe and then as immigrants in the United States, where he lived some of his later years. Born 150 years ago in Ukraine, he died in New York in 1916, where he was honored by tens of thousands attending his funeral procession.

As various bankers and corporate executives secure billions of dollars in loans from Washington, D.C., I can’t help but recall some of the language Sholom Aleichem’s Menachem Mendel employs when he loses his small fortune in the stock exchange. Current reports are not quite as graphic as Mendel’s description (from “The Letters of Menakhem-Mendel and Sheyne-Sheyndl,” translated by Hillel Halkin):

… The market has crashed just as futures, God help us, were being called. I’ll see the Messiah before I see my money again. Bismarck, they say, caught a cold and all politics went into panic. No one knows what tomorrow will bring… I should have made my move a day earlier. But go be a prophet! The dealers run around like chickens without their heads, you’ve never seen such pandemonium.

Not all the suffering Sholom Aleichem describes results from antisemitism, persecution or poverty. In the cases of both Menachem Mendel and Tevye (after Mendel talks the dairyman into investing 100 rubles with him), some of the losses are self-inflicted, a consequence of reckless financial decisions. The waywardness of men at the stock market, not just the ways of God, influences the outcome of business deals in these stories.

Menachem Mendel, in particular, has a knack for losing money on the stock exchange in Sholom Aleichem’s stories and plays. Although best known for the play “Fiddler on the Roof,” based on stories about Tevye, Sholom Aleichem also wrote a play about a stock market scandal that includes investor Mendel. Dreaming of great wealth, buying shares of stocks that bear such names as “London” and “Yaknehoz,” both in the play and stories Menachem Mendel loses far more than he gains. He loses not only money, but also his home life, as he travels from one exchange to another, from Odessa to Warsaw, and hears from his wife, Sheyne-Sheyndl, through only her letters. At one point, she declares that her foolish husband’s initials (M.M.) stand for “Market Maniac.” Sheyne-Sheyndl’s comic misunderstanding of the stock exchange leads the woman to refer to its “stockings” and “portfolderols,” in Hillel Halkin’s fine translation of the comedy. She may have the terms wrong, but at least she has the sense (that her husband lacks) to recognize the unreliability of the market.

The promised riches of which Mendel and Tevye dream turn out to be “false profits,” to use a pun from the lamentation of loss in another story. Sholom Aleichem depicts a few worshippers of these false profits, comic figures who misplace their faith in stockbrokers. The brokers, it turns out, are not prophets. No doubt the bittersweet comedy reflects Sholom Aleichem’s own experience of great financial loss from investments. He lost all he owned in an 1890 market crash. If there is a lesson in his stock exchange stories, it is that the free market is not risk free, and not the messiah. (If you are like Mendel, you’ll see the messiah before you get your money back again.)

Today we may need a contemporary Sholom Aleichem around to chronicle current financial debacles, but we also can go back to his original stories. The times have not completely changed. In a concluding letter to Sheyne-Sheyndl, Menachem Mendel reports: “I’m off to America, my dear wife! A whole crowd is travelling with me…. Everyone says that in America, God willing, I’ll be a big hit.” Mendel still may be alive in America, or else his descendents are, trying to find those elusive streets paved with gold.

The Return of Menachem Mendel