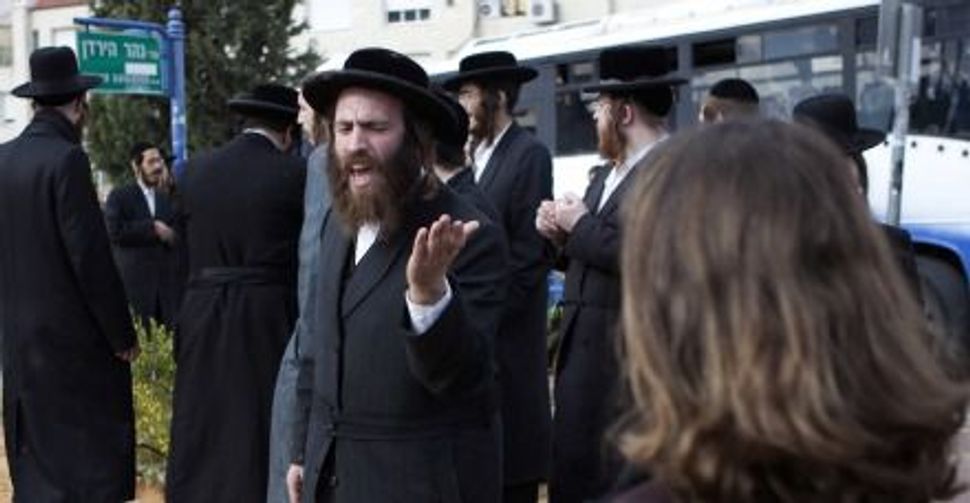 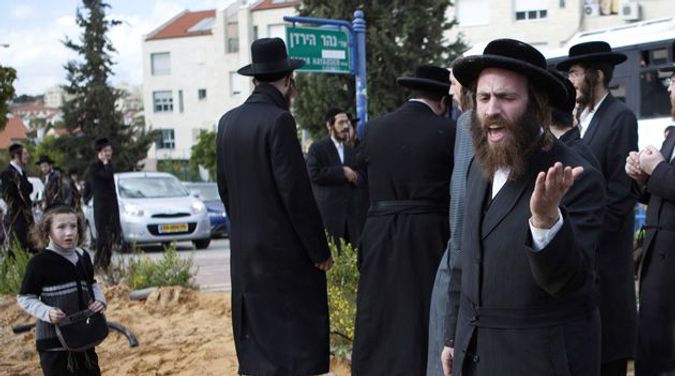 Fighting Mad: Ultra-Orthodox Jews are pushing back against efforts to fight gender segregation and harassment. Secular Jews must not allow fundamentalists to hijack Judaism. Image by getty images

How many wake-up calls do we need?

The spate of communal misogyny in Israel and the United States, carried out under the pretext of a religious mandate, yet unjustified even by ultra-Orthodox interpretations of Halacha; Haredi America’s wall of silence about sexual abuse; and a variety of other scandals in the Haredi world, such as the targeting of a dissident Hasid in New Square, N.Y., and allegations of financial improprieties. All of these have made headlines.

Yet those of us who care about Jewish communities in the U.S. and Israel have yet to get serious about the threat of Jewish fundamentalism to the vibrancy of our people. Yes, in recent weeks, girls being spit on and women pushed to the back of public buses have attracted public outrage, media exposure and statements of condemnation from across the Israeli political spectrum.

But the deeper problem remains: Not this or that policy, or this or that outrageous display of hypocrisy or sexism, but Jewish fundamentalism in general.

According to a recent study by CBS, the Haredi population of Israel is set to grow 580% in the next half-century. National Religious (Orthodox), secular and other Israeli Jews are expected to become a minority in Israel, squeezed between growing ultra-Orthodox and Arab populations. Even in America, Haredi Jews represent the fastest-growing sector of the Jewish population, threatening not only secular Jewish culture but non-fundamentalist religious Judaism as well.

Ignoring this demographic threat would bring costs as severe as ignoring assimilation or anti-Semitism: the shrinking of the Jewish culture and people, and a powerful fundamentalist bloc that, as in much of the Islamic world, will eventually define Judaism, both internally and externally.

The majority of Jews have remained silent for a variety of reasons: There is a sense that we Jews should stick together and not attack one another. There’s a reluctance even to name Jewish fundamentalism as such, and recognize it for what it is. There’s the false nostalgia of, say, “Fiddler on the Roof,” which depicts Haredim as cuddly and quaint, rather than, as they often are, deliberately ignorant of modernity, misogynist, complicit in violence and actively desirous — as evidenced by the recent Channel 10 report in Israel — of taking over Israeli civic institutions.

And worst of all, I think, is the sneaking suspicion many Jews have that Haredim are the “real Jews.” (Think of how Haredim are often depicted that way in popular culture.) They’re the most religious, the most committed, the most traditional. All the rest of us, even the Orthodox, have compromised with modernity, with our desires. They’re the stalwart ones, and while we might not want to live that way ourselves, we think they are guaranteeing the Jewish future.

They are not. They are undermining it. Sure, by having very large families, they are producing more Jews. But the Jewish future they would create looks more like Islamist Iran than any Jewish culture that I, and most progressives, would want to be part of. If this is the Jewish future, count me out.

Jewish fundamentalism, like other religious fundamentalisms, is a recent phenomenon. All fundamentalisms arose in response to modernity, and all grasp onto an invented history and invented authenticity to justify ever more reactionary policies. Even newer is the power that these fundamentalists have. This is not powerless Tevye in an isolated shtetl: These are powerful, focused and highly sophisticated forces.

We do not have to sit by passively while the Jewish people devolves. There is much we can do to welcome Haredi Jews into the Jewish family, precisely by actively opposing Haredi values and culture.

First, it is obviously true that not everyone who wears a sheitel or black hat has the same set of views about the world. Rather than assume that the farthest-right fringe speaks for all Haredi Jews, mainstream Jewish communal leaders should promote alternatives to it. I know many thoughtful Haredi Jews — and not just Chabadniks, who are something of a special case. If only their leaders would be willing to stand up to the farthest-right fringe, instead of worrying that they’d be seen as less frum for doing so. We in the non-Haredi world can set standards for which Haredi leaders we will support — and the first of those standards should be a categorical refusal of the sort of violence we’ve seen lately in Brooklyn and in Israel.

Second, those of us who support Israel financially, either individually, through federations or through other organizations, should insist that none of our support be used to support Haredi institutions. Of course, doing so is practically impossible, since those institutions are supported at every level of the Israeli government and Israeli civic organizations, which are in turn supported by American philanthropic and governmental aid. But isn’t this why we have large umbrella groups such as federations and federations of federations? To act in a unified way and exert meaningful pressure? Individual donors and family foundations should target their giving away from Haredim, and large conglomerations should demand changes to the way Israeli society subsidizes radical fundamentalism.

Such as? They should demand an absolute end to the Haredi exemption from Israeli military service, to the funding of schools that do not teach a full secular curriculum in addition to a Jewish one, to any public subsidy of gender-segregated public accommodations and to any Israeli rabbinate — including the Chief Rabbinate — controlled by Haredim. And if these demands are not met, our umbrella organizations should refuse to cut the checks — or at least target them more specifically away from fundamentalist institutions.

We need to understand that fundamentalism is not Israel’s friend. By providing blank checks for the Iran-ization of Israel, Israel’s friends are hurting the state itself.

Third, Jewish communal funding agencies should prioritize the support of organizations that help Haredim leave the fundamentalist fold. These organizations, such as Hillel in Israel and Footsteps in the U.S., are tiny shoestring operations. They, or organizations like them, should be enhanced, empowered and developed into serious social service agencies. Even without the social, familial and institutional pressures that confront individuals seeking to leave, it is very difficult to emigrate from the Haredi world. Young adults often are barely literate in English or modern Hebrew, and often lack basic job skills. In addition to cutting familial and communal ties, they risk financial ruin by leaving the Haredi bubble. The wider Jewish community needs to make that transition as easy as possible.

This could be a boon for klal yisrael. In both Israel and the U.S., ex-Haredim are some of our most creative artists and dynamic educators. Steeped in tradition, yet courageous enough to have radically questioned it, they are treasures to the community. We should make it as easy as possible for them to enrich all of us with their gifts.

I would go even further. I think we need to proselytize for non-fundamentalist Jewish culture within the Haredi world. Nothing should be non-consensual; if people want to live a fundamentalist lifestyle, it is their right to do so. But let’s not pretend they’re making an informed choice — they aren’t. We can and should make the case, by whatever means are available, that a life of engagement with the modern world is better than the ghetto.

Some will say that all this amounts to a kind of internecine culture war — some Haredim clearly do, as evidenced by the recent Jerusalem protest featuring Haredi adults and children wearing gold stars and concentration camp pinstripes to demonstrate their persecution amidst the “Zionist exile.” But the Kulturkampf already has been started by the other side. Haredim are not like the Amish, simply wishing to be left alone. In Israel, where they have sufficient power, they demand more and more government resources, they demand women get to the back of the bus (literally) and they demand separate schools in which to propagate fundamentalist ideology. This is true even in American enclaves such as New Square, where the line between governmental and religious authority is blurred. The “war” has already started.

But we don’t need to be seduced by the rhetoric of conflict. This isn’t a war, and it isn’t between us and them. “They” are part of us, and “they” are often facing the brunt of oppression themselves, particularly if they are women or children. Moreover, “they” are actually quite dependent on “us” — on Israel’s tax dollars, on the lack of discernment among American donors and on all of our complacency around the threat posed by fundamentalism to the values of the Jewish majority. We don’t have to fight a war against our sisters and brothers. We just have to stop subsidizing an ideology that threatens us all.