The Rabbi’s Son Who Built Detroit 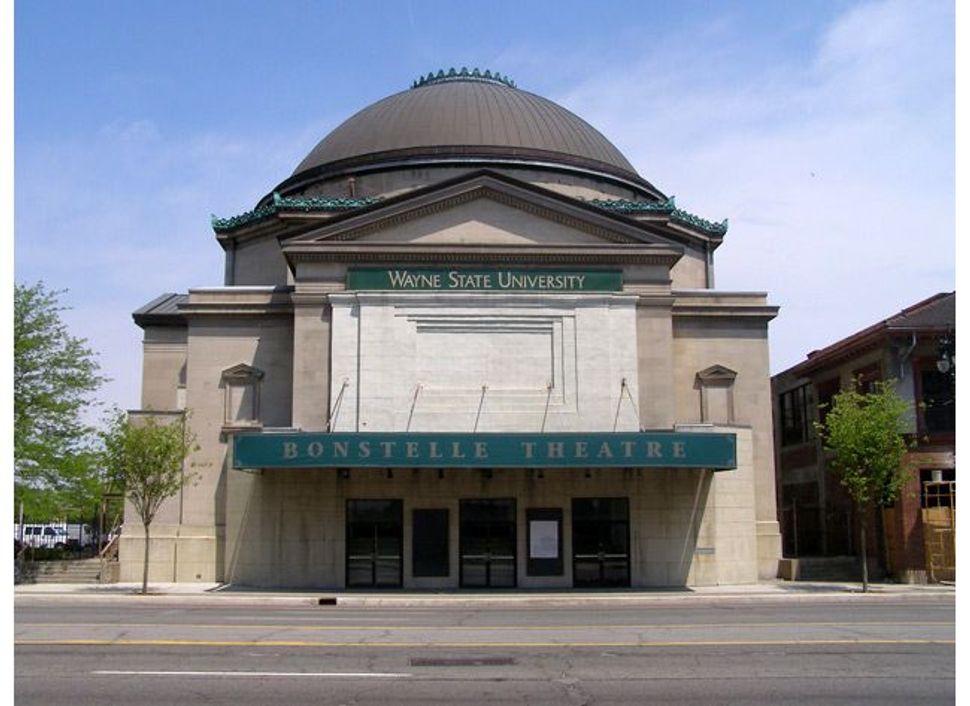 Scroll down for a slideshow featuring Kahn’s work.

Albert Kahn is America’s forgotten architect — even though in his lifetime, he (and his firm) produced more buildings than any other architect, and his design and production method changed the face of the country. Eighty years before the bailout of the auto industry, just before the Great Depression, Kahn built the most opulent of Detroit’s new corporate skyscrapers — the Art Deco-style Fisher Building. Facing the GM headquarters, Kahn’s grandest expression of civic architecture defined the unique American union of commercial and civic identity.

Detroit Auto Show 2009 this month pinned its hopes for a twenty-first century transformation of the American motor industry on selling the complex technologies of electric engines. The person who transformed the space and appearance of Detroit in the twentieth century, though did not depend on complexity.

Although his father was a rabbi, Kahn had little formal education. Nevertheless, he rose to become a pre-eminent architect who helped create industrial America in the first half of the 20th century. He and his firm designed more than 1,000 buildings for Ford and several hundred for GM, as well as swank homes and imposing corporate headquarters of those company’s owners and managers. He designed buildings for the Dodge Brothers, Walter Chrysler and the Fisher Brothers, and in the 1930s, while he was serving these titans of automotive capitalism, his firm built more than 500 factories in the Soviet Union. Kahn’s great Ford factory in River Rouge, Mich., was the most impressive — and largest — architectural expression of the modern industrial age.

But because industrial building design in that age was not deemed “architecture,” and because Kahn’s output of nonindustrial buildings hardly reached outside Michigan — nor did they serve the old-money East Coast tastemakers — Kahn’s commercial, civic and religious architecture is today little noted outside his home state. And because Kahn was no theorist and was barely involved in the mainstream of European modernism, his work is all but ignored in the classic studies of modernism by Nikolaus Pevsner, Sigfried Giedion, Kenneth Frampton and others.

Still, his factory designs that elevated architectural functionality to a highly active level in production remain a seminal influence on modern buildings, industrial and otherwise. As Kahn said shortly before his death in 1941, “Who would question that the entire field of architecture has been influenced by today’s commonsense solution of the factory building?”

A testament to his impact on productivity was the enormous percentage of all war materials — not just cars and trucks — being built in factories designed by Kahn’s office during the Second World War. For good or ill, modern forms of the industrial park, the glass-walled factory and the big box can be traced to Kahn. He experimented with, and expanded, the use of concrete-and-steel construction in building, as well as the employment of large open floor plans and glass curtain walls to allow natural lighting.

As a professional, too, Kahn was innovative. The organization of his firm, with its levels of project management and highly skilled and cooperative work teams, mirrored the research, design and production arrangements of the industry he served. Since the efficient design of the buildings was so central to the efficient building of cars and trucks, the systems of design — architecture and automobiles — inevitably fed off each other.

Still, for many, he remains the “other” Kahn, his fame obscured by that of postwar modernist Louis Kahn (no relation).

Albert Kahn’s decline in prestige has mirrored that of the city he helped create. But decades of prosperity means that Detroit is well worth a visit for its architecture and art. In addition to factories and corporate headquarters, Kahn designed synagogues.

When Kahn designed the General Motors Building in 1919-1921, he helped create the largest office building in the world, headquarters to the auto giant from 1923 until 1996. Since then, the building has been restored, renamed Cadillac Place and leased to the State of Michigan. The design was notable for its four parallel 15-story wings (served by 31 elevators) set against a central spine. In this way, Kahn created a series of courtyards and, more important, provided huge numbers of offices with windows (a similar arrangement became popular for hospitals). Most of the building’s exterior is articulated as an even grid of rectangular windows, but for the top two floors — where the company’s top brass would meet — an enormous applied colonnade surmounts the entire building, effectively moving the traditional street-front colonnade high into the air.

This deliberate switch of Louis Sullivan’s Chicago-style skyscraper organization of base, shaft and cornice surely pleased GM’s bosses, as much as it offends architectural purists. But Kahn had nothing to prove about functionalism, and he knew when a symbolic gesture could be appropriate. Inside, on the ground level, the building spine is articulated as a continuous gallery surmounted by a coffered barrel vault. The entire gallery was decorated with high-quality, classically inspired themes, which have been beautifully restored in the 2002 building renovation. There was spillover effect, too, since many of these same designers and craftsmen clearly worked on the contemporaneous Temple Beth El, only a few blocks away.

A famous photograph shows Kahn working in his office beneath a large photo of Rome’s Pantheon — apparently his favorite building — and when he designed for the public square, Kahn had in mind the grandeur of classic Rome. Kahn’s Motor City buildings were nothing like his efficient, functional and streamlined factory buildings, which were transforming the peripheries of American cities, and Kahn himself seems to have been perfectly comfortable with this dichotomy of styles.

In Detroit, in 1903, he began building the Packard factory, which in 1905 would introduce the “Kahn” system of concrete construction. That same year, he designed his first Temple Beth El (now transformed into a theater at Wayne State University), a small, domed classical building modeled in a general way on the Pantheon. Indeed, in civic circles it was Classical design that was considered modern in its day. In 1904, as a sign of its progressiveness, Temple Beth El abandoned its long-held practice of selling and assigning seats, in favor of the more egalitarian practice of free seating. The rabbi declared, “In God’s house, all must be equal.”

The Fisher Building and the GM Building created a new civic center for Detroit, on Woodward Avenue, three miles from the old downtown. In 1922, close to this civic ensemble, Kahn designed his second Temple Beth El — now Lighthouse Cathedral — with its impressively wide facade of a giant columnar order. The building was an homage to his old friend, Henry Bacon (the two had traveled together in Europe as young men). Bacon’s design for the Lincoln Memorial had been accepted for Washington in 1912, but in 1922 it was just being completed. The new synagogue was a near-last gasp for the Classical-style synagogue that had been almost de rigueur for Reform congregations in the first decades of the 20th century.

Both Beth El synagogues are symbolic of Kahn’s art and his Judaism. Kahn was not ashamed of being a Jew (especially not in the 1920s, when his foremost patron, Henry Ford, disseminated the “Protocols of the Elders of Zion”), and he was proud to see Judaism as a mainstay of civic virtue and cultural enlightenment. Today, though, the church maintains the large interior of the former 1922 synagogue, albeit without the large stained-glass windows that were removed by the congregation when they moved to their Minoru Yamasaki-designed home in Bloomfield Hills, Mich., in the 1960s. Painted ceiling pendentives remain, however, representing the Jewish experience in America.

Kahn embodies all that was Detroit. He was a self-motivated workaholic. He was adaptable and competitive. He was thoroughly professional in all that he did, and his work — no matter what the style and who the client — was always of high quality. His factories were not just tools for production; they also created an image of industrial progress that was recognized around the world. Kahn died in 1942, at the peak of his prestige. Today, Detroit is rediscovering Albert Kahn, and it is time for the rest of the country to follow. Perhaps if the legacy of Albert Kahn can be revived, there is still hope for the auto industry that he served so well.

Samuel D. Gruber is an architectural historian and the author of “American Synagogues: A Century of Architecture and Jewish Community” (Rizzoli, 2003). He is the Rothman lecturer in Judaic studies at Syracuse University, and president of the International Survey of Jewish Monuments.

The Rabbi’s Son Who Built Detroit