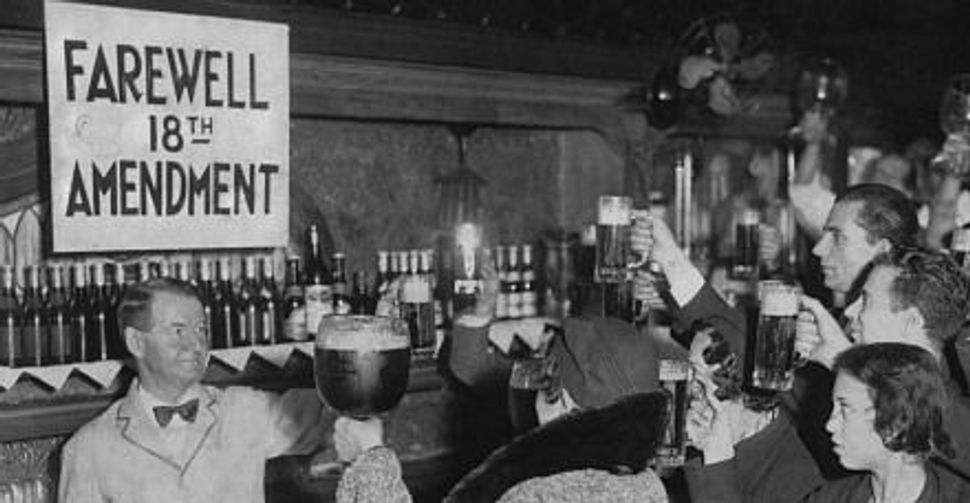 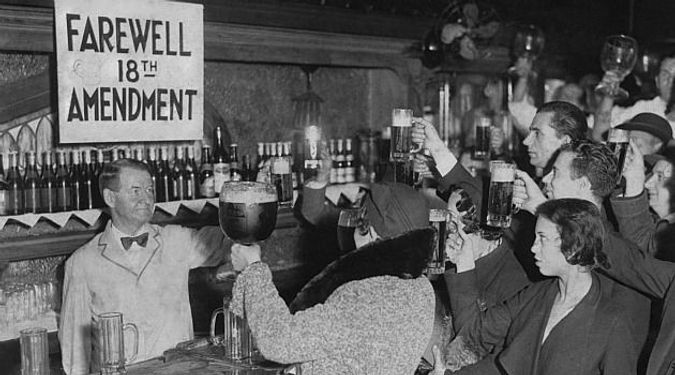 One for the Road: Speakeasy patrons, notably both men and women (mixed drinking was one unintended consequence of Prohibition), offer a farewell toast. Image by St. Louis Post-Dispatch

Jews and Booze: Becoming American in the Age of Prohibition
By Marni Davis
NYU Press, 272 pages, $32

Sociologist Nathan Glazer has written that “a people’s relation to alcohol represents something very deep about it.” That this statement rings especially true for Jews is the premise of University of Georgia professor Marni Davis’s new book, “Jews and Booze: Becoming American in the Age of Prohibition.” As Davis explores the cultural meaning of alcohol in Jewish life at the turn of the century, and in the decades surrounding Prohibition, she doesn’t pass judgment on the motives of the anti-alcohol movement. Instead she focuses narrowly on the way debates over what Prohibitionists called “the sum of villainies” impacted the acculturation of Jewish immigrants and played a role in their “becoming American.” The book, while academic in tone and occasionally overburdened by data, is a comprehensive look at a little-discussed historical subject that can’t help but have a spring in its step.

The issue of Jewish acculturation in the 19th century was a thorny one. Group identity and a sense of distinctiveness were as much a part of the American Jewish experience as was the desire to be — and be seen as — a good American citizen. Alcohol, equally thorny at that time, exacerbated this tension as Prohibition created incompatibilities between the law of the land and Jewish religious law. Jews’ tendency to side with the “wets” unearthed deep-seated ambivalences over what it meant to assimilate.

Armed with a mass of archival information that’s rather dry for all its soggy subject matter, Davis reaches the broad conclusion that American Jews were opposed to the anti-alcohol movement from the start because they “sensed its underlying moral coercion and cultural intolerance.” She notes that Jews had a reputation as a historically temperate people whose upstanding American values made them “staunch defenders of the Constitution and champions of religious pluralism and political liberalism.”

Of course, liquor and simchas had always been part of the Jewish experience. Witness such joyful Yiddish hymns to mashke, liquor, as Davis cites:

As much as such paeans to merriment enliven the book, red flags begin to rise when drinking songs meet with historical generalizations. Still, Davis is so evenhanded (one might venture to say sober) in her approach as to make this sort of conclusion inoffensive. Because, for instance, the temperance movement sought the Christianization of the American state, Jews would naturally have feared that it would imperil their equal status. So it makes sense that they should oppose Prohibition as much as advocates of a more tolerant and open politics as for the purposes of being able to sell and produce liquor — which, Davis finds, they did in spades.

Jews and booze have gone hand in hand since the beginning of the Diaspora. Although she admits that data on early American Jewish occupations is hard to find, Davis nonetheless manages a well-documented history of Jews in the distilling and liquor wholesaling industries, an area of economic activity that apparently has barely been studied. Davis concludes that in the 19th century the liquor business provided Jews an entrée into American life — especially through whiskey, which was (and still is) seen as an unambiguously American product. Successful distillers became prominent, valued members of their communities (Davis notes that the trade publication Bonfort’s Wine and Spirit Circular often included a little Yiddish for its readers) at the same time that business networks and in-group hiring strengthened Jewish communities within the trade.

When a second wave of Jewish immigrants arrived between 1880 and 1920, many of these also turned to the liquor business. Now, though, attitudes toward both immigrants and alcohol were in decline throughout the country. “Jews became a symbol, a stand-in for complex and discomfiting socioeconomic dynamics,” Davis writes. For Prohibitionists, “characterizing these changes as a conspiracy hatched by Jewish capitalists and middlemen was a way to regain some amount of comprehension and control.” This rhetoric cast the Jewish liquor producers, wholesalers, distillers and saloon keepers as villains, creating a new set of loathsome Jewish stereotypes. What was once a source of pride as a defense of personal liberty was made to seem downright un-American.

Jewish bootlegging during Prohibition only worsened this tendency: Davis quotes a Baltimorean reader of the Jewish Times who after hearing in 1923 that the city had jailed 35 Jewish bootleggers worried that this presented evidence that “a Jew is a law-breaker and one who does not care where he gets his money as long as he gets it.” Of course by then it was too late: To many, the fact that Jews routinely flouted the Volstead Act suggested that they were unpatriotic, or even that they intended to control America by controlling its booze (something that, given the amount of drinking going on at the time, didn’t seem unfeasible). That most Jews had always thought alcohol should be legal made these sorts of slurs especially hard to dismiss out of hand. In fact, Jewish leaders themselves were divided: Some believed that becoming fully American meant accepting the law as passed; others believed the law itself to be un-American; still others worried that the sacramental wine exception to the Volstead Act meant that they were held to different moral standards from those of the rest of the country. Davis, for her part, sees the fact that Jews participated in the illegal alcohol trade as evidence of acculturation, since “flouting of Prohibition law was practically a national pastime.”

In the end, Davis concludes, “Prohibitionist anti-Semitism had always been a manifestation of other anxieties.” Since Repeal, she writes, Jews have largely moved away from service and craft jobs and toward white-collar professions, and the “malevolent Jewish alcohol entrepreneur disappeared from the cast of American Jewish stereotypes.” Davis cites the kind of kitschy ethnic pride displayed by the beer “He’Brew” (marketed by Shmaltz Brewing Company under the slogan “The Chosen Beer, est. 5757 (1996)”) as evidence of how comfortable American Jews now are with their long past in the liquor trade. And drinking certainly no longer divides the country the way it once did. But as odd as such divisions now seem, “Jews and Booze” shows how early debates about alcohol shaped the American Jewish identity while it was in the process of being refined — both inside the Jewish community and by the country at large — and offers an unusual yet compelling perspective on what we might call its “distillation.”