Victor Borge, Now More Than Ever 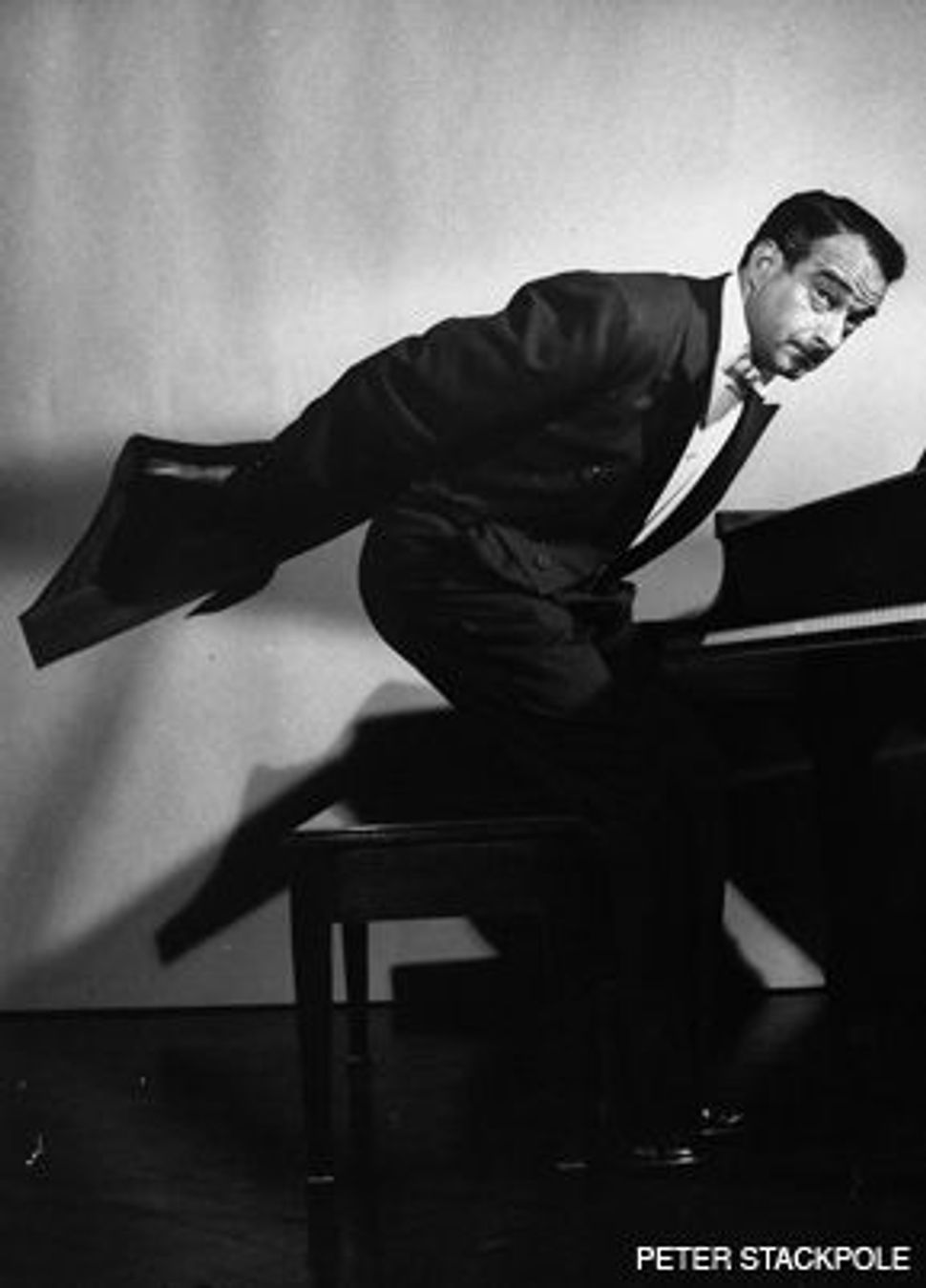 STANDING ROOM ONLY: Victor Borge had audiences rolling in the aisles and living rooms in Europe and North America.

Back in the days of great Jewish classical musical virtuosi like Jascha Heifetz and Vladimir Horowitz, parents put grim pressure on their children to attain equivalent stardom. Sometimes, the careerist stress attached to childhood music lessons resulted in the unintended creation of musical comedians, like the giddy French-Jewish cabaret pianist Jean Wiéner (1896–1982), who melded Mozart and jazz, or the 1930s German-Jewish singing group the Comedian Harmonists, composed of highly trained singers who breezily vocalized a version of the overture of “The Barber of Seville.” Yet, no Jewish musical jester had a more lengthy and resonant career than entertainer and pianist Victor Borge (1909–2000), nicknamed The Unmelancholy Dane. Borge’s centenary is being feted this year with affectionate laughter. 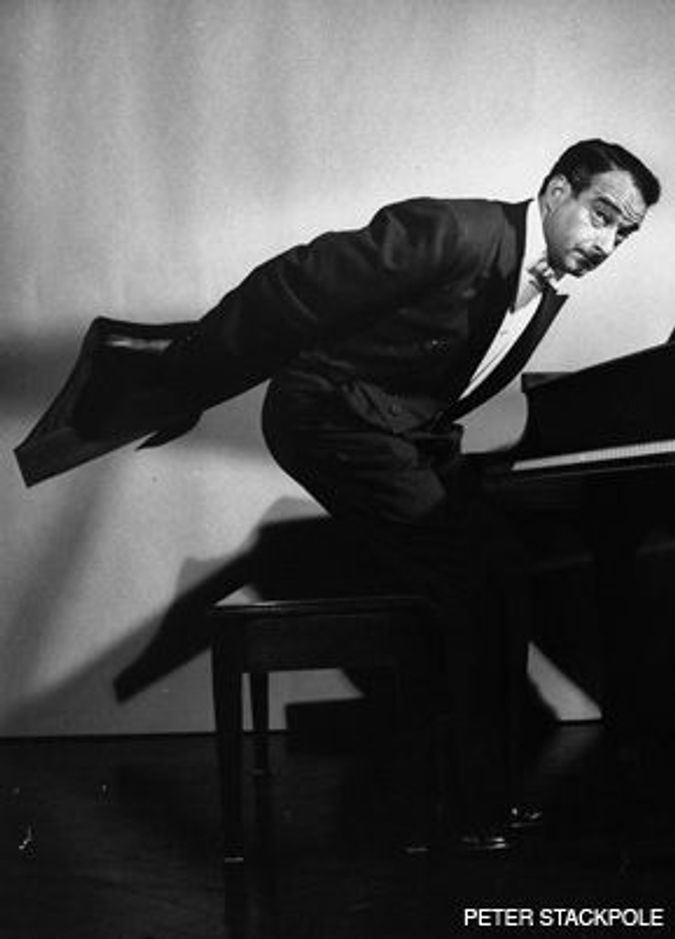 STANDING ROOM ONLY: Victor Borge had audiences rolling in the aisles and living rooms in Europe and North America.

From January 23 to May 2, Manhattan’s American-Scandinavian Foundation will host “Victor Borge: A Centennial Celebration,” including photos, videos and other souvenirs. Last November, PBS broadcast “Victor Borge: 100 Years of Music and Laughter” and gave viewers a chance to order a welcome six-DVD set, “Victor Borge Classic Collection,” from Questar. Although the DVDs are a succession of unrestored and often repetitive snippets compiled higgledy-piggledy, they make a lot of valuable material available.

In one routine, Borge plays a hysterical four-handed version of Liszt’s “Hungarian Rhapsody No. 2” with Armenian pianist S¸ahan Arzruni twisting arms and legs around his duo partner while interjecting gravely, “This is awkward” and “Leave me alone!” In another, he accompanies soprano Marilyn Mulvey, who suddenly shrieks out a high note, sending him flying off the piano bench in shock. At their best, such Borge moments transcend mere shtick and become comic choreographies.

While critics complained that Borge repeated such routines over and over throughout his long career, part of the delight in his physical comedy is its familiarity. Just as when Oliver Hardy repeatedly fell into the same pothole, the laughs came not from surprise, but from the fulfillment of expectations.

Borge’s own trajectory was highly unexpected. Born Børge Rosenbaum in Copenhagen, the son of Russian violinist Bernhard Rosenbaum, who performed in the Royal Danish Symphony Orchestra, Borge was soon aware that he belonged to the country’s tiny Jewish minority, as he later told New York Times music critic Harold Schonberg: “A schoolboy called me ‘Jewboy’…. When I went home I asked my mother what ‘Jewboy’ meant. That got me angry. It fired me up. Little by little I felt that I had to be better than any of my schoolmates. And I could do that because I was a natural musician and a good student.” Borge won scholarships to study in Copenhagen and Vienna with the noted Danish pianist Victor Schiøler (1899–1967), and then in Berlin with the Liszt pupil Frederick Lamond (1868–1948), a Scotsman who, Borge told The New York Times, was “harsh and domineering. Besides, I did not think he played very well.”

By contrast, another teacher, Dutch-German pianist Egon Petri (1881–1962), was, as Borge told Schonberg, “such a sweet man. He gave me a quality of finesse I never had.” In the 1930s, Borge observed the Nazis’ rise to power in Berlin, and in Copenhagen he created anti-Nazi routines that won him the enmity of Danish fascists who threatened him with physical violence. His gags were rudimentary but effective: “What’s the difference between a Nazi and a dog? A Nazi raises his arm.” In the disarray of Europe veering toward war, Borge concentrated on his comedy at the expense of music, confessing that stage fright — a further anxiety at a highly anxious time — prevented him from feeling at ease as a strictly classical performer. He was doing his cabaret act in Sweden when Germany invaded Denmark in April 1940. Fortunately, he was able to make his way to America and freedom.

There, Borge found himself in a new career conundrum. Horowitz and Józef Hofmann were headlining at Carnegie Hall, and New York offered no room for any more émigré pianists. Borge made the heroic decision to improve his English and become a comedian on American radio, but at a time when standup performers like Bob Hope, Jack Benny and Fred Allen ruled the airwaves. Borge’s comedy, whether for broadcast or in a long-running 1950s Broadway act, “Comedy in Music,” soon became heavily verbal, following the fashion of the day. His japes could sound tired, as when he pointed to his wrist and told audiences: “See this watch? My grandfather gave it to me right before he died. For 20 bucks.” Or told concert latecomers, “I’m from Copenhagen and I made it here before you did.”

These old saws, however much they still may delight devotees, are not really the best of Borge. Instead, they create a gentle, unthreatening atmosphere in which music-making is free of the pressures of grim-faced virtuosity. Borge’s own playing, the true highlight of any performance, was calmly limpid, and his disarming qualities of simplicity and grace continued into his old age. (He performed until just before his death, in his 90s.)

In addition to expressing humanistic ideals in performance, Borge was active in charitable endeavors. In the 1950s, he co-founded the organization Thanks to the Danes (later renamed Thanks To Scandinavia), which offered scholarships to Scandinavians to study in America and Israel as a gesture of gratitude for efforts to protect Scandinavian Jews during the Second World War. Such endeavors continue posthumously, and in 2004, the Victor Borge Foundation donated $250,000 to help construct Copenhagen’s new Danish Jewish Museum, designed by architect Daniel Libeskind. Ultimately, Borge was right: Audiences did not need another Horowitz or Hofmann, but the world would have been a sadder place without Victor Borge.

Victor Borge, Now More Than Ever