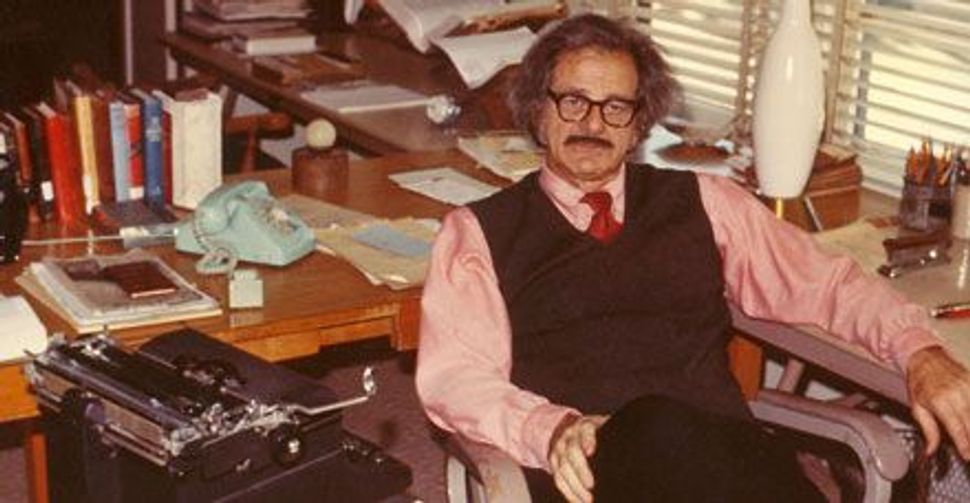 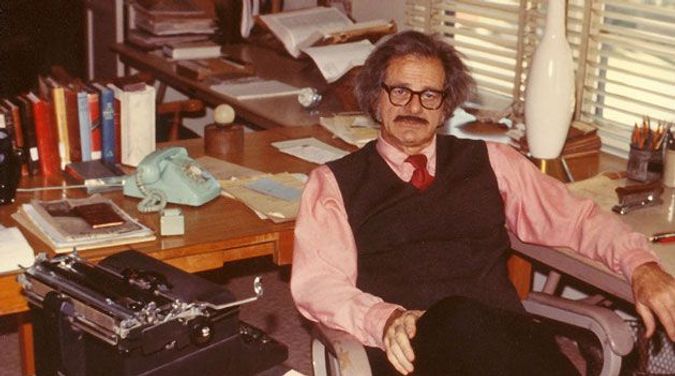 Self-Portrait: Norman Corwin took this photograph of himself at his Los Angeles apartment in 1973. Image by wiki commons

Norman Corwin, the writer and radio producer who died on October 18 at age 101, was often dubbed the “poet laureate of radio” by journalists, but he was rather more than that. Born in an East Boston tenement to parents of Russian-Hungarian Jewish origin, Corwin inspired the following paean of praise from one of his listeners, who recalled a 1945 radio show decades after it was broadcast: “[Corwin] provided me with my first sense of the conjuring power of art and helped strengthen my first ideas as to what I wanted and expected a literary artist’s language to do: enshrine the struggles of the embattled…. There, amazingly, was soul coming out of a radio.”

This acclaim is from Philip Roth’s 1999 novel “I Married a Communist,” in which the author, via his alter ego, Nathan Zuckerman, looks back to Corwin’s heyday, in 1945. The program was “On a Note of Triumph,” broadcast mere days after the war in Europe had ended, when both Roth and Zuckerman were 12 years old.

Even at that tender age, Zuckerman/Roth adored Corwin’s “poeticized vernacular that… combined the rhythms of ordinary speech with a faint literary stiltedness to make for a tone that struck me, at twelve, as democratic in spirit and heroic in scope…. Whitman claimed America for the roughs, Norman Corwin claimed it for the little man… [in] a linguistic distillation of the excited feelings of community that the war had aroused.”

Corwin was inspired by a powerfully enduring sense of the Jewish community deeply integrated with the American experience. While in his 20s, he moved to New York to work at the Columbia Radio Workshop. There, Corwin expressed Yiddishkeit in both light-hearted and serious contexts. Corwin’s verse play “The Plot To Overthrow Christmas,” broadcast in December 1938, portrays villains in hell who plot — unsuccessfully — to destroy the holiday. These villains include Nero, Caligula and Haman, of the Book of Esther. The toothless, hysterical Haman speaks like the Western film character Gabby Hayes, transforming a Christmas play into a Purim shpiel. Corwin’s boisterous rhymes are somewhere between Canadian balladeer Robert Service and rhymester Ogden Nash, as when Haman is told by Lucrezia Borgia that she deserves his trust and he replies: “Of that we haven’t a particle of doubt, Miss Borgia, / I’m sure we all have nothin’ but kind feelin’s Towardja. (sic)”

More soberly, after a 1935 tour of Nazi Germany, Corwin became an ardent anti-fascist, although in later interviews he reports that some scorned him as a “premature anti-fascist” for opposing dictators before America had officially declared war on them. Undaunted, Corwin was outraged by fascist Italy’s bombings of Ethiopia and Spain, and penned an ironic script in blank verse, “They Fly Through the Air With the Greatest of Ease” (broadcast in 1939), writing of the victims:

They are unbeautiful in death
Their bodies scattered and bestrewn
Amid the shattered theorem.
There is a little oil and blood
Slow draining in the ground.

Historian Paul Buhle’s “From the Lower East Side to Hollywood: Jews in American Popular Culture” (Verso, 2004) incorrectly suggests that in his scripts, Corwin “rarely advert[ed] to his own Jewish status…. Not even as [Corwin’s] career closed did he make an issue out of his Jewishness.” On the contrary, Corwin’s work repeatedly celebrates Jewish culture and tradition. Corwin’s July 6, 1941, program “Between Americans,” which was rebroadcast on Pearl Harbor Day, exulted over such Americana as freedom of the press, the Yankees-Red Sox rivalry, Kiwanis Club meetings and a symphony concert including “something by a great German Jew named Mendelssohn, something you couldn’t play in certain countries on the other side.”

In 1941, with stupefying energy, Corwin, on his own, wrote, produced and directed “26 by Corwin” — a half-years’ worth of weekly one-hour radio shows. This sustained solo production, usually assumed by whole teams of employees, included an “Old Testament Trilogy,” with programs recounting the stories of Samson, Job and Esther. As a coda in November 1941 as war clouds gathered, Corwin wrote “Psalm for a Dark Year,” yet another program inspired by the Bible as a source of solace and beauty.

Eight days after the Pearl Harbor Attack, Corwin’s “We Hold These Truths” was aired over the combined national networks (CBS, NBC Red, NBC Blue and Mutual), where it was heard by more than 60 million radio listeners, about half of the American population at the time. The American dream was explored through contributions by artistic collaborators, including, among others, actor Edward G. Robinson (born Emanuel Goldenberg) and composer Bernard Herrmann. Throughout the war, Corwin remained inspired by Judaism, as in the May 1944 program “Tel Aviv,” described by the Columbia network as a “picture of Tel-Aviv and its people at war against the Axis… [which] will describe life in the Jewish national home.”

First heard on May 8, 1945, Corwin’s “On a Note of Triumph” would later inspire not only Roth, but also the 2005 film “A Note of Triumph: The Golden Age of Norman Corwin,” an Oscar winner for best documentary, short subject. In 2010, the original program was released on CD by Radio Spirits as part of a 10-CD Corwin tribute set. “On a Note of Triumph” depicted the Allied victory as a triumph of the common men who were “smarter” than fascists, for “without whipping a priest, burning a book, or slugging a Jew” they were able to “whop the bejeepers” out of the foe. Corwin brings his audience into a synagogue for a rabbi’s sermon, as the narrator addresses the clergyman with a Whitman-like flourish:

The rabbi himself also gets to speak, explaining:

No great tyranny has ever lasted. The empires of Pharaoh, Caesar, Philip, Napoleon, Hitler, each flourished and had sway and was destroyed. They were powerful but all of them forgot one thing: that the only civilization that can endure is a free one.

We also hear a jolly jig written by Woody Guthrie, “Round and Round Hitler’s Grave,” echoed in many different languages to evoke worldwide rejoicing. Corwin’s multiple abilities as producer, director and author mean that apt comparisons are not with mere performers, but with the great jazz composer and orchestrator Billy Strayhorn of the Duke Ellington Orchestra, or actor, director, and magician Orson Welles.

“On a Note of Triumph” presents a rich soundscape of surprising aural juxtapositions. It concludes with a newfangled prayer addressed to “Lord God of test-tube and blueprint,” later excerpted in “Gates of Prayer: Shaarei Tefila: The New Union Prayerbook for Weekdays, Sabbaths and Festivals,” published in 1975 by the press of the Central Conference of American Rabbis:

Lord God of trajectory and blast
Whose terrible sword has laid open the serpent
So it withers in the sun for the just to see,
Sheathe now the swift avenging blade with the names of nations writ on it,
And assist in the preparation of the ploughshare.

Rabbi Stern was well known to his Reform congregation for his sometimes surprisingly eclectic choices of texts for study, but by including Corwin’s prayer, he was right on the mark. In 1992, Corwin told one interviewer, “I am a Dead Sea Scroll,” and like any inspirational scroll, his messages to humanity are still being unfurled.

Listen to a radio documentary about Corwin and his 1945 radio broadcast, “On a Note of Triumph,” commemorating the defeat of Hitler.

And watch Corwin filmed in Sydney, Australia for a British Pathé film from 1946.