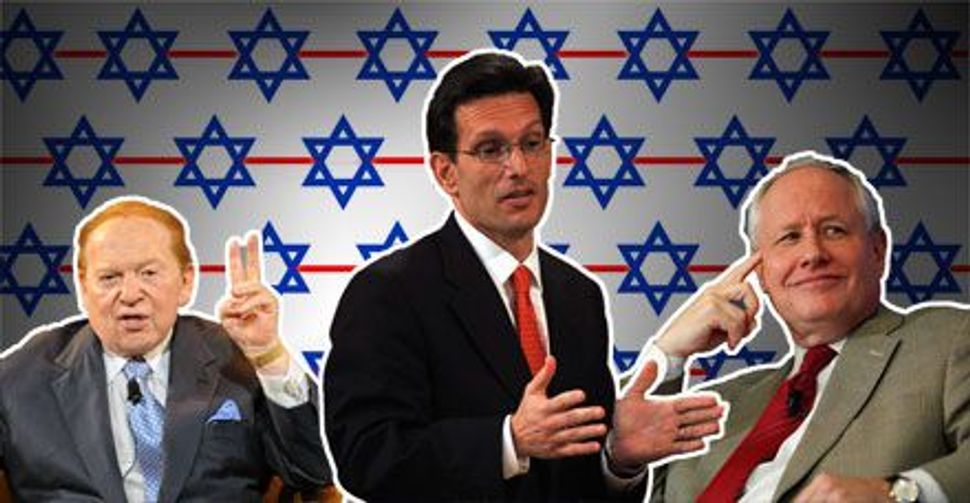 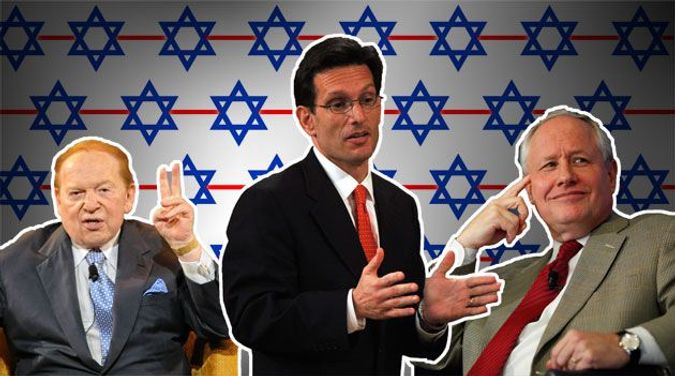 Right or Wrong? Sheldon Adelson, Eric Cantor and William Kristol might be wrong on the issues, but they?re not ?un-Jewish.? Image by Nate Lavey/Getty Images

Jewish conservatives continue to spend significant amounts of effort and money to swing American and Israeli politics to the far right. Most visible is gambling billionaire Sheldon Adelson, whose funding of Israeli media affected the 2009 Israeli election and who is now spending a fortune to equate American “support for Israel” with support for Israel’s far-right wing.

Similarly, William Kristol’s “Emergency Committee for Israel” plays on Jewish fears to garner Republican votes. And Eric Cantor, House minority whip, is one of the most vocal proponents of Tea Party ideology — the same social Darwinism dressed up as American populism that brought us the 2008 financial crisis.

All three, and many more, have at times related their activities to Jewish values or to their connection to the Jewish people. What has been the Jewish progressive response to these claims?

In the main, there have been two responses, neither of which has been adequate. The first response has been simply to ignore them. Well-meaning Jewish liberals, many of whom are friends of mine, speak innocently of “living out Jewish values” in the pursuit of liberal politics, as if ignorant that our political opponents think they are doing the same thing. Without more articulation, to say we are applying our Jewish values to issues of social justice or human rights is just a sound bite. The other side can say the same thing.

Relatively few progressives come out and say this directly, because to do so violates a cardinal progressive principle, that of pluralism and toleration. (Of course, conservatives don’t hesitate to make these claims, painting critics of Israel as self-hating Jews, or social progressives as rebels against the Torah.) So, some make a softer claim: that conservatives get it, but get the wrong it. Yes, there are reactionary elements within Judaism, but these are just barnacles stuck onto the side of the Jewish ship. Yes, the Cantors and Kristols of the world can find some nasty Jewish traditions to draw from, but they miss the real point, which is Judaism’s progressive social agenda, or love of peace, or whatever.

But what is the criterion by which the “real” is to be determined? Is the (right-wing, dominance-obsessed) Book of Joshua any less real than the more peaceful teachings of Isaiah? Are the Torah’s stringent death penalties less real than the talmudic rabbis’ ameliorations of them? Once again, without more articulation, this is just public relations.

I’d like to articulate a third position, one that may initially seem more pessimistic, but one that I think enables Jewish progressives to clarify how we differ from our conservative co-religionists and how we can better discuss our differences: that the conservatives are at least as right as progressives are, that “Judaism” is too broad a term to be of use in political philosophy and that we must instead see ourselves as interacting in a particular way with the resources of the Jewish tradition.

Let me adopt the language of Rabbi Michael Lerner here, from his two most recent books, “The Left Hand of God” and the new volume, “Embracing Israel/Palestine.” (Many other contemporary teachers have made similar points, but Lerner’s language is conveniently clear.) Lerner observes that God is a complicated biblical character, and that “what God wants” changes. Sometimes God wants revenge, sometimes mercy. Sometimes God tells us to pursue peace, other times to annihilate all the nations in the Land of Israel. Rather than see God as always representing one set of values, Lerner proposes (following classical Kabbalah, but inverting its symbolism) that we understand God as having two (metaphorical) hands, the right and the left. The right hand of the Lord doeth valiantly; it values strength and toughness, violence and vengeance. The left hand of God is the force for loving-kindness, mercy, empathy and compassion.

Setting aside the God talk, this simply means that Jewish text and tradition reflect many (human) voices, some of whom favor “conservative” values and others “liberal” ones. You can craft an authentically Jewish reactionary politics based on the Bible, or an authentically Jewish progressive one. And not only on the Bible, but also on 2,500 years of subsequent Jewish thought. A liberal on sexual ethics can observe how the talmudic rabbis loved sexual pleasure and departed from their Christian contemporaries in celebrating it. A conservative on sexual ethics can observe how these same rabbis had very strict ideas about gender roles, keeping women subservient to men. Either reading works.

Are we left with relativism, then? They have their Judaism, and I have mine?

I don’t think so. There are still articulable values that guide how we interpret tradition — and just recognizing that fact can help get us away from “he said, she said” debates about Judaism.

Values first. Personally, as I look at the sweep of Jewish encounters with ethics, I don’t find any instances in which people ask God to be more vengeful, whereas I find many in which people argue for compassion. Abraham argues with God to be more merciful to the Sodomites. Moses argues with God to spare the Israelites when they trespass. Indeed, those biblical figures who didn’t adequately plead for mercy — Noah, Jonah — are generally despised by most mainstream commentaries.

There are, of course, outliers: God tells the Israelites not to have mercy on Amalek, and, responding to the Crusades, Jews ask God every Passover not to have mercy on the goyim. But in general, rabbinic law makes biblical law more merciful, not meaner. Rabbis edit Scripture, even audaciously, to highlight merciful “left hand” attributes over judgmental “right hand” ones. Consider the law of the “stubborn and rebellious son,” read out of enforcement by the rabbis. Or the “thirteen attributes of God,” which focus entirely on merciful qualities, and truncate a verse from the Torah midsentence in order to omit language of judgment. And so on.

Even more important than which values we choose to help us interact with tradition, though, is for us to recognize that such choices are necessary. Progressives and conservatives, Reform Jews and Orthodox ones, often say that they are acting according to “the Jewish tradition,” as if that tradition had only one thing to say. Historically speaking, this is poppycock. Even those values within our tradition that seem to be ironclad (for example, “Do not murder”) are subject to interpretation and selective reading (for example, “Killing in war does not count as murder”). There are poets, philosophers and prophets who have spoken out in favor of coexistence, and those who have spoken out in favor of ethnic cleansing.

In other words, the responsibility is ours. Meir Kahane’s Jewish roots were as strong as (if not stronger than) Bob Dylan’s or Emma Goldman’s. The reality is that the Jewish tree is very large, with branches growing in all directions and with deep root systems that support almost all of them. We cannot evade responsibility for our moral and ethical choices by claiming that they are dictated by tradition. They aren’t. Tradition supports contradictory values.

I have my approach to Jewish values that allows me to say that Eric Cantor, Sheldon Adelson and William Kristol are wrong — pluralism is not the same as relativism, after all — but what I won’t say is that they are somehow un-Jewish. “Jewish” includes too wide a range to let any political ideology claim its mantle, and we have to be sophisticated and clear-eyed in our relationships with a complicated tradition that has as many sexist, ethnocentric, superstitious, nationalistic and cruel aspects as it does egalitarian, just, compassionate and uplifting ones. What is “Jewish” is not necessarily what is right or good. How could it be, since Judaism often espouses diametrically opposed views of the same issue?

Judaism is not the answer key; it’s the question key. It sets the stage for the important questions to be asked, but accommodates contradictory answers to them. Thus, rather than inquire as to whether liberals or conservatives are “really Jewish,” we are invited to more interesting explorations. Like which ideology promotes a healthy Jewish people, a saner world, a safer world, or more compassion. Or which ideology leads to more holiness, more connection and more truthfulness with the experiences of all people. These are not the only Jewish values in existence. But they are the ones worth keeping.