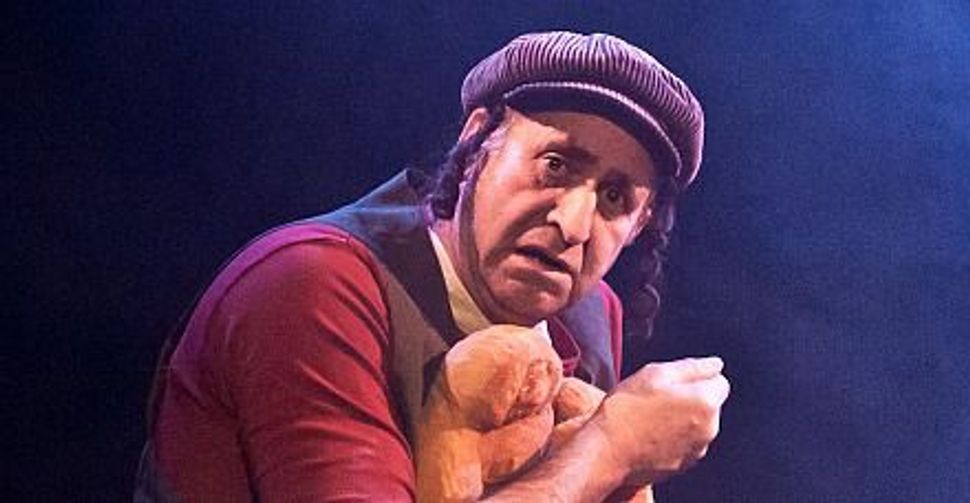 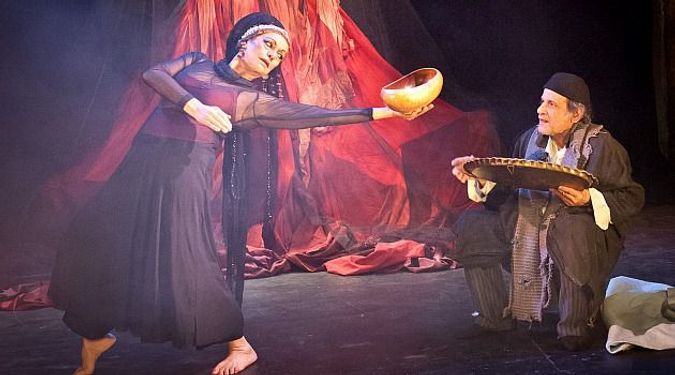 Page to Stage: La Mama?s productions of ?The Lady and The Peddler? and ?Gimpel the Fool? take different approaches to translating books into theater.

The current production in New York City’s legendary LaMama Experimental Theatre Club’s 50th anniversary season is a duo of one-acts from Tel Aviv’s Nephesh Theatre, each based on a short story by a Nobel Prize-winning Jewish writer — the first, “Gimpel the Fool,” based on the celebrated Isaac Bashevis Singer story; the second, based on S. Y. Agnon’s “The Lady and the Peddler.” Though presented together as a complete evening, these plays have been created by distinct creative teams and the differences in their approaches are instructive.

Page-to-stage adaptation is a tricky business. The constraints of prose fiction — the putting together of words into sentences that accumulate into paragraphs, chapters, complete stories — allow for things like syntax, incidental metaphor, and the texture of language and its relation to our hidden selves and our manner of thought to work in silent tandem with the reader’s experience toward a new, imagined reality. It’s a private art. An intimate art. A subjective art.

Theater, on the other hand, is a public art. It relies on the physical presence of performers and audience in the same space. We in the audience are witnessing something that is objectively real, something happening in front of us. Instead of being told a story, we’re being shown one. For this reason, no matter how brilliant the work of fiction, for it to live fully on the stage it must be translated into — and transformed by — the theatrical vernacular, and it lives and dies onstage by how the director and performers turn it into a living reality. “Gimpel the Fool” does next to nothing to transform the original text.

As Singer wrote it, “Gimpel” is a monologue delivered by the titular character, detailing all the ways that he has allowed himself to be tricked and mocked and taken advantage of by the other members of his provincial Jewish community — most notably his sexually rapacious wife, who has eyes for every man in town except him. In the Nephesh production, Howard Rypp, who plays Gimpel and also adapted, directed and designed the show, recites the Saul Bellow translation of the story almost verbatim while shuffling around the stage, miming the action the story describes.

Even more problematic is the way Rypp plays the character. In the opening salvo of Singer’s story, Gimpel states: “I am Gimpel the fool. I don’t think myself a fool.” As the story works its way toward its spiritual center, and Gimpel is revealed to be something of an embodiment of the holy and not simply the gullible schmuck we thought he was, this statement turns out to be crucial. His foolishness is, at least sometimes, a choice. He allows himself to be mocked and deceived. Rypp, though, plays him as a simpleton, which is disastrous to the meaning of the story. If the holy fool is truly mentally deficient, the argument for his holiness collapses on itself.

Gimpel, as written, is full of action. But because Rypp is unwilling to stray from, or interpret, the text, this action is recited, not dramatized. This reverence for the text, combined with the one-note performance Rypp gives, makes it impossible for the production to evoke the spirit of the story.

If Singer’s meaning might be found in the old Jewish themes of endurance and even some far-off spiritual redemption, Agnon’s “The Lady and the Peddler” is about older, biblical themes of blood and liberation and virile masculinity that are also newer, Israeli ones. Using the same basic tools — music, disembodied offstage voices, a single male narrator, a whiff of smoke — the result is as far from Rypp’s “Gimpel” as Poland is from Jerusalem.

Maybe this is to be expected. Geula Jeffet Attar, director of “The Lady and the Peddler,” and Victor Attar, a primary actor in the show, were the founders of the LaMama Tel Aviv troupe, started in 1971 by the original maven of downtown New York theater, Ellen Stewart. Her many achievements include launching Sam Shepard’s career and giving us “Hair.” Her vision of theater was very much of its time, and the acid and acoustic guitar global-village vibe embodied in the LaMama aesthetic has clearly been passed along to Attar and Jeffet Attar.

Instead of telling Agnon’s story, Attar inhabits his character through his exhausted posture and the fire in his eyes, through the persistence and courage he conveys through his voice, and he physically walks us into the story. He meets a woman — exotic, alluring, a Christian of some sort of Middle Eastern descent, played here by dancer Ilana Cohen — and he sells her a dagger. He spends the night in her barn. He makes himself helpful. She invites him to stay at her home for a while. They seduce each other. And gradually he uncovers the facts of her life: that she has been married multiple times; that each of her husbands died at her hands and instead of food, she survives on their blood; that if he is to survive, he must find a way to flee.

A simple story, really (albeit with disturbing sexual politics), but the production is more concerned with enacting its erotics than with “telling” this story. Take the scene in which the Lady plies the Peddler with fine food. Skeins of Middle Eastern folk music spin around the room. The Lady, dressed in gauzy fabrics with golden threads sewn through their hems, her eyes black with kohl, an Egyptian headdress tinkling atop her head, pounds her feet and twirls her arms in a mash-up of contemporary and traditional folk maneuvers.

She presents the Peddler — slumping on a low bench like one of Beckett’s tramps — with silver platters and goblets, running her hands down his neck, coaxing him, teasing him. Video of bees swarming over their hive is projected on the worn, grimy sack in which the Peddler has stuffed his tallit katan, a fringed garment traditionally worn by Jewish males. Though the Peddler sometimes barks out a sentence or two, describing the food he has been given, long moments of stage time pass by without a word, and during these moments the story pulls the audience into its reality. We forget that we’re watching an adaptation. What we’re watching instead is simply theater.

Agnon’s “The Lady and the Peddler” echoes and responds to “Gimpel the Fool” in interesting ways. Both are monologues narrated by old and world-weary Jewish men. Both revolve around issues arising from how these men respond to treacherous women — in Singer’s case, a fallen Jewess; in Agnon’s, a murderous Christian. Both are fables in which the characters are as much symbols (or Symbols) as they are representations of human beings.

Sadly, these resonances don’t translate in this production. Despite his reverence for the text, Rypp can’t match Jeffet Attar’s powers of evocation, and so, rather than contemplating the plays’ themes as we should, the audience is compelled to compare the plays on quality. While Jeffet Attar’s aesthetics might be a little musty now, they are the perfect iteration of a certain kind of barefooted, 1960s-style neo-primitivism, and next to this, those of Rypp just look muddled and amateurish.

Joshua Furst is a novelist and short-story writer and a frequent contributor to the Forward.

“Gimpel the Fool” and “The Lady and the Peddler” run through January 29 at La MaMa E.T.C. in New York.

This article was amended on January 28, to correct inaccuracies that had originally been provided by the press materials.