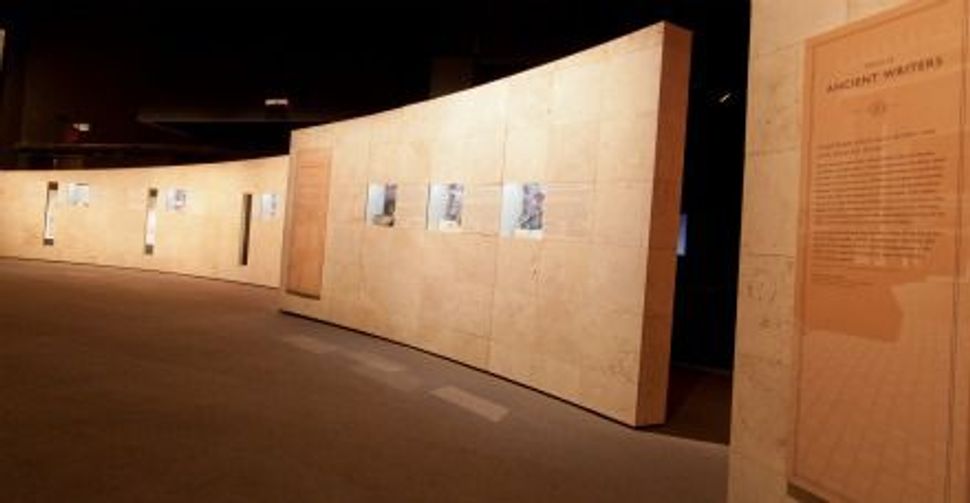 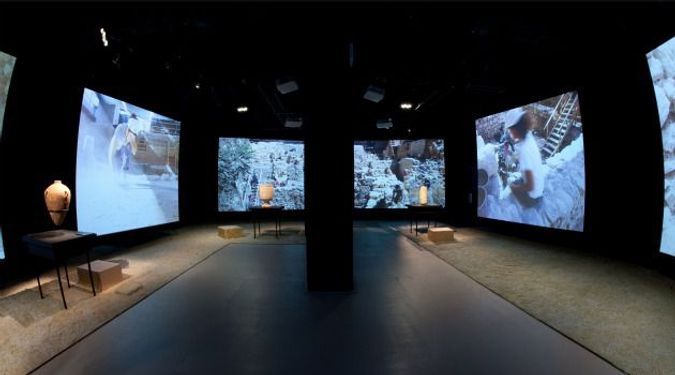 Sacred and Profane: When the doors open, visitors crowd the exhibition spaces. Holy texts and ersatz artifacts mix on the Great White Way. Image by courtesy of discovery times square

Some had come to take in the sights, others a Broadway play and still others the Dead Sea Scrolls, which were to be found in temporary residence at Discovery Times Square (“More than a museum”), on West 44th Street. Visit this “once-in-a-lifetime-exhibit”; “Experience firsthand the traditions, beliefs and iconic objects of ancient Israel that impact world religions today”; “Experience the Holy Land” — trilled the advertisements for “Dead Sea Scrolls: Life and Faith in Biblical Times.”

Not since the 1920s, when a giant-sized, papier-mâché monument of Moses sailed down Broadway to promote Cecil B. DeMille’s film “The Ten Commandments,” has the Great White Way made so much of the ancient Near East.

While the Dead Sea Scrolls are on view through the spring, the small fragment from Qumran that comprises the text of the Ten Commandments enjoyed a limited engagement that ran only until January 2.

Determined not to miss out on an opportunity to see this ancient artifact with my own eyes, I headed out to Discovery Times Square. I was not alone; the entire tourist population of the Big Apple accompanied me — or so it seemed.

The number of visitors was so large and daunting, in fact, that the display at Discovery Times Square ended up being more a matter of crowd control than an expression of curiosity about antiquity. Everywhere I turned, I came face to face with a line. And then another one. Where most exhibitions place a premium on movement, on the circulation of both ideas and people, this one celebrated the act of waiting.

As I waited and waited and waited my turn within a space so hushed and dark that it approximated a cave (at least I think that was the point), it occurred to me that we, the visitors, constituted the human equivalent of a scroll. Advancing in the queue, which ran three abreast, we too unfolded, bit by bit, much like the texts on display.

A nice idea, but it didn’t mitigate my discomfort. Nor did the uneasy mix of the authentic and the ersatz that characterized the “Dead Sea Scrolls” exhibit. In the very center of the room were dimly lit fragments that actually dated back thousands of years; at its perimeter, age-old jugs and household implements reinforced the historicity of the occasion. But then, at the far end of the gallery was a partial reconstruction of the Western Wall. Fashioned out of fake rock, it loomed above a hefty-sized boulder actually taken from the site in Jerusalem. Yes, you’ve read that correctly. There, in the corner of a room on West 44th Street, visitors encountered the Kotel.

Given that most of the audience appeared to be composed of Christians rather than Jews, you have to wonder at the curatorial decision to include a replica of this Jewish holy site. Also worth pondering is why the man responsible for directing traffic remarked, with not a scintilla of irony and no twinkle in his eye, that visitors looking for the Ten Commandments were to head toward the Western Wall and hang a right. Surely he was having a laugh at our expense. But no, he was dead serious. For him, the simulacrum was of a piece with, and indistinguishable from, the antiquities on display.

Were that not enough to set one’s head spinning, visitors were actually composing kvitlakh, or heavenly petitions, and gently inserting them into the cracks of the faux stone, much as they do at the actual site in Jerusalem. A way to while away the time on line? Perhaps. But when I asked a number of scribblers what they were up to, they replied earnestly that the pieces of paper they had consigned to the cracks in this wall would eventually be gathered and sent off to Jerusalem, where they would be reinserted into, and received by, the honest to goodness wall. Hope springs eternal, as they say.

Eventually, the Ten Commandments materialized. I wish I could report that I had a transcendent experience, that gazing at the oldest known version of the biblical do’s and don’ts filled me with excitement and emotion. It didn’t. The crowds were so thick, the light levels so low, the pressure to move on to let the next person take a peek so intense, that what I experienced had more to do with relief than with engagement: The end of the Discovery Times Square experience was near.

Columnist, historian, curator and occasional ethnographer, I came to West 44th wearing a number of hats, all of which put me at some remove from the proceedings at hand. But what about everyone else? Why were they there, and what did they take with them as they emerged from the gloom into the bright light of Broadway? I suspect that what drew most visitors to the display and sustained their spirits as they waited patiently on line was the opportunity to be in the presence of texts that had, arguably, been in the presence of Jesus or his followers.

Much like a reliquary, “Dead Sea Scrolls” dissolved the temporal boundaries between past and present, enabling those in attendance to connect the early history of Christianity and its context with their own contemporary display of faith. For them, visiting the exhibition was an exercise in affirmation.

Little wonder, then, that they’re packing ’em in at Discovery Times Square. Now, what’s this I hear about Moses coming to town?