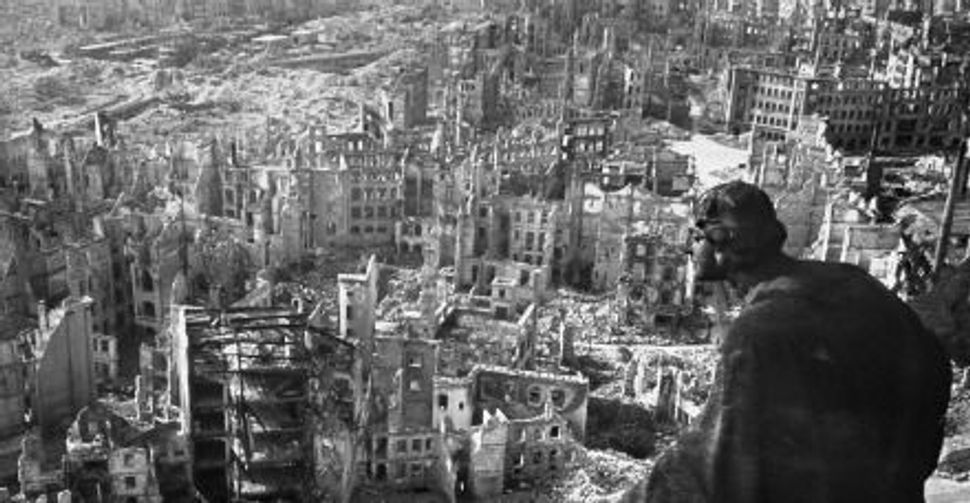 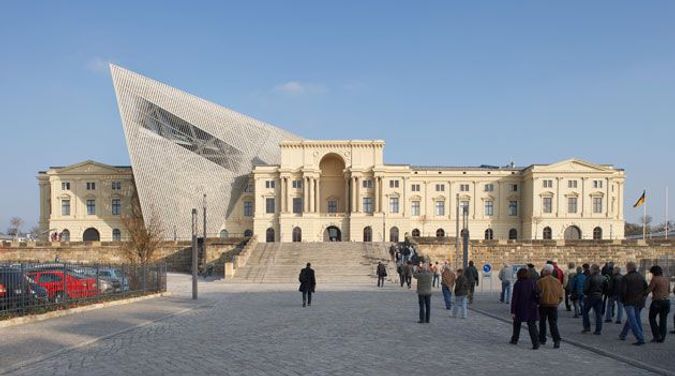 Vantage Point: The Libeskind-wedge at the Museum of Military History in Dresden, eastern Germany, offers an unusual perspective on the city. Image by Hufton+Crow Photography

The February 1945 firebombing of Dresden has long been a rallying point for neo-Nazis. Indeed, prominent Holocaust deniers have been assiduous in symbolically conflating Dresden with Hiroshima as the real crematoria of World War II. Neo-Nazis have swarmed this ancient capital of Saxony for every anniversary of the bombing since the reunification of Germany in 1989.

The majority of Dresdeners don’t want their pain to reinforce the monstrous ideology that precipitated the destruction in the first place. It is already difficult enough for descendants of perpetrators to deal with questions of collective or inherited guilt, unfathomable historical reality or relative victimhood. They want to be able to mourn the devastation and mass incineration of the city without having their commemorations co-opted by any politicians, let alone neo-Nazis.

One of the loveliest cities in the world, Dresden has been called the “Florence on the Elbe.” It was the first city in Europe to enact urban zoning regulations and is historically a major center of the arts and engineering. Dresden has now largely been rebuilt to resemble what was there before the war. Alongside the re-creation of the physical reality of the old city out of the rubble, efforts almost as massive have been undertaken to heal the spiritual and psychological wounds of the past: education under communist rule layering the disinformation with anti-Western propaganda compounded with lies covering up Nazi history. Dresden cultural institutions, local and federal governments, and the people themselves are now taking multiple steps to confront the neo-Nazi problem and the widespread lack of knowledge about the past.

Among the numerous efforts this year, Dresden commissioned a new requiem by a Russian-American Jewish composer for performance in the Frauenkirche and the Semper Opera; opened the huge anti-war Military Museum designed by Daniel Libeskind, and, most dramatic, had a “human chain” — individuals, families, old and young alike — holding hands in the below-freezing weather to create a peaceful barrier. Outnumbering the much-diminished contingent of 1,600 neo-Nazis by at least 4:1, the citizens effectively blocked them at the train station.

The Dresden Staatskapelle Orchestra (one of the oldest and finest orchestras in the world) has been performing annual memorial concerts since 1951, when much of the city was still in ruins. This year, for the first time, the orchestra commissioned a new requiem instead of performing an existing work. The program book for the performances confronted the audience with two photographs. The first showed the huge Dresden crowds greeting Hitler on May 1, 1933, in the huge square in front of the Semper Opera. (Hitler had made his appearance in the city conditional on the opera and the Staatskapelle being made completely “Juden-frei” [Jew-free].) The second photo showed the bombed-out city of 1945.

For these performances, the orchestra deliberately chose to bring in performers from the Allied countries — Russia, England and America — and to incorporate Jewish elements. New York’s Saint Thomas Choir of Boys and the London’s St. Paul’s Cathedral Choir were imported to sing alongside the men of the Saxon State Opera Chorus. For this highly symbolic and emotional occasion, for the first time,with additional funds from the Frauenkirche Foundation, the orchestra commissioned its prolific Jewish composer-in-residence, Lera Auerbach. She created an 18-movement “Ode to Peace” for male voices and orchestra: four soloists (two boy sopranos, a countertenor and a bass-baritone) plus boys’ and men’s choirs. She also cobbled together an ecumenical assortment of prayers, psalms and other texts in Latin, German and Hebrew.

Auerbach’s musical idiom is tonal and largely conservative, with a few modernistic touches, like bowed flexatone (similar to bowed saw, but more delicate sounding) heard at the beginning and end of the piece. In her work, rather than reaching for the tragic, she concentrates on psalms and prayers asking for help or seeking peace with God. A basic theme of the piece is the “Dresden Amen” — a setting of the word “Amen” by one of the 18th century’s directors of this orchestra, J.G. Naumann, made famous by Mendelssohn showcasing it in his Reformation Symphony and subsequently adopted by Wagner to represent the Grail in his “Parsifal.” Here, however, Auerbach transforms it from a cadence in the major key into a melodic transition to the minor.

One of the high points was the simplest: the deliberately naive, folkish setting for boy soprano Richard Pittsinger in call-and-response with the boys’ choirs singing in Hebrew, invoking the four archangels and the Shechinah. Pittsinger sang with uncommon beauty and clarity, to say nothing of a remarkable concentration and stamina throughout the 70-minute work. The Russian-born, Dresden-trained Vladimir Jurowski (a major conductor who also happens to be Jewish) conducted authoritatively, though he later revealed he had received the score only two weeks prior to the performances.

The most stunning moment, though, came at the end, when the audience observed, by tradition, several minutes of silence — a silence so total that one could hear the high-frequency vibrations of the lighting fixtures. There was no applause, and everyone left, wrapped in that silence.

Even the German army is doing what it can: Four months ago, it opened the astonishing new Military Museum in Dresden, designed by Libeskind. The museum confronts the enormity of Germany’s military past with bracing frankness. Originally an armory in the 19th century, across the Elbe in the Neustadt neighborhood, it was built — like almost everything in now trendy Neustadt — with French reparations money from the Franco-Prussian war. Libeskind, who won the commission in a competition, has restored the building and pierced it with an upward-pointing glass-and-steel wedge that dramatically disrupts its neoclassical symmetry. This wedge permanently points the direction the bombers flew when destroying the city.

A worthy companion to the Jewish Museum Berlin, which Libeskind also designed, it is impossible to convey in brief terms how powerful the experience of the Military Museum is. When you go to the top floor of this wedge, you are immediately confronted by the lesson of the Golden Rule, embodied in stone: a large square of bombed-out pavement from Wielun, Poland — which suffered the first civilian bombing of the war — followed by a similar square of bombed-out pavement from Dresden.

Representative testimonies by surviving perpetrators and victims are placed side by side, along with biographical information of those providing the testimonies. Beyond these, one can go through a door and find oneself outside, in the glass wedge itself, and hovering on a non-solid narrow bridge looking out on the city skyline in an unreal, Piranesi-like structure, suspended in time and space.

In addition to vehicles and weapons, the rest of the museum is filled with a breathtaking wealth of diverse exhibitions. Some document how animals were subjected to war (dogs trained as suicide bombers, cats used to test nerve gas, etc.), games used to promote anti-Semitism, militarization of language. A list of exhibits and approaches in this museum would be longer than this whole article. Although the 20th century is given the majority of space, almost a millennium of military history is graphically demonstrated. It is Germany’s largest museum of any kind. In the almost two full days I spent going through the exhibits, I saw a great deal but not everything in it.

With all these and other efforts, the story of Dresden is still evolving. As an additional example, in May the Dresden Staatskapelle, led by its new music director, superstar conductor Christian Thielemann, will perform in Tel Aviv for the first time.

Raphael Mostel is a New York-based composer whose World War II compositions include music for the atom bomb commemorations in Hiroshima, the liberation of the Netherlands and memorializing Janusz Korczak.