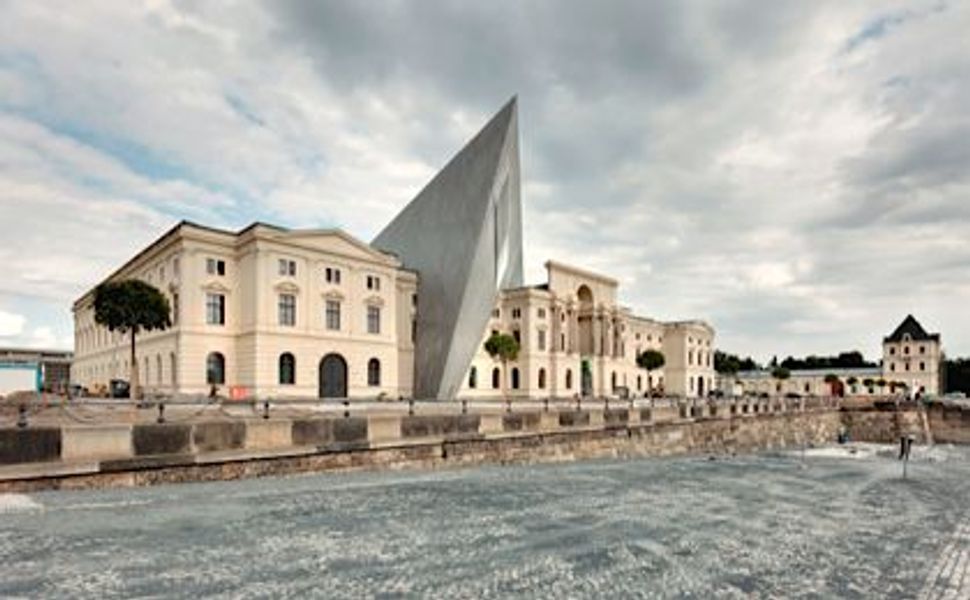 Rising from the conservative courtyard of the Military History Museum of Dresden, a gleaming metallic wedge heads straight for the wall of the original 1873 Saxon armory building. Without pausing, Daniel Libeskind’s new wing cuts through the 19th-century structure and reaches its soaring vantage point on its far side. Since its opening on October 15, visitors have been able to climb up to the exposed viewing balcony at the tip and look out over Dresden.

The architectural intervention would be striking anywhere, but in Dresden it’s downright startling. Talking to Libeskind about the project, it’s clear he’s deeply excited about the possibilities of making a building in the context of Dresden. In an interview with The Arty Semite, he characterized the town’s post-war recovery as nostalgic:

Dresden has been rebuilt in a very nostalgic way, with no modern architecture. Everything has been restored to the baroque.

In a mild tone Libeskind followed this observation about the restoration with the suggestion that “no one wants to know about the past.” His main aim in designing this wing is to force people to care about the history of the military in Germany and specifically to care after having “an encounter with what the military does in a democracy.”

The former armory and current museum of military history has been transformed in a didactic way that is not simply aesthetic. There really is no way to avoid the fact that the building and all it stands for has been interrupted. As Libeskind told me, “the space within is not about war anymore, it’s about people.”

Now that those “people” enter the museum through the addition, people will be physically and intellectually “reoriented” within the collection. For Libeskind, “it’s not about weapons, it’s not about chronologies, though of course they are important. It’s about us, it’s about people, how do people behave.”

People can ascend towards the apex of the wing and actually leave the building on the upper level. The leading vertex has a platform, and there

You are truly suspended in a very particular moment toward that incredible panorama of Dresden, toward its fatality, its past, but its future as it is being rebuilt you cannot remain indifferent to what the city is and what the military is. It’s something to learn, it’s about education. What is a museum for? It’s to teach and for people to draw lessons from history.