Deciphering Secrets of the ‘Patio Tomb’ 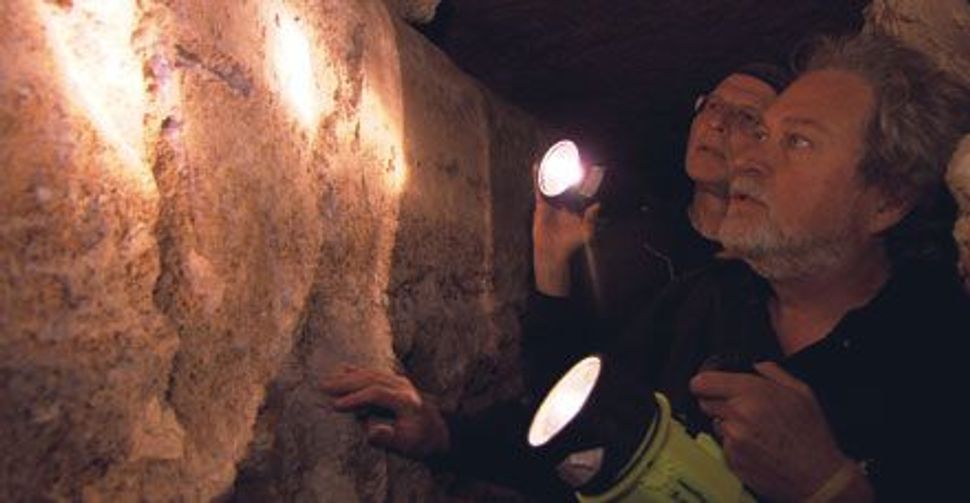 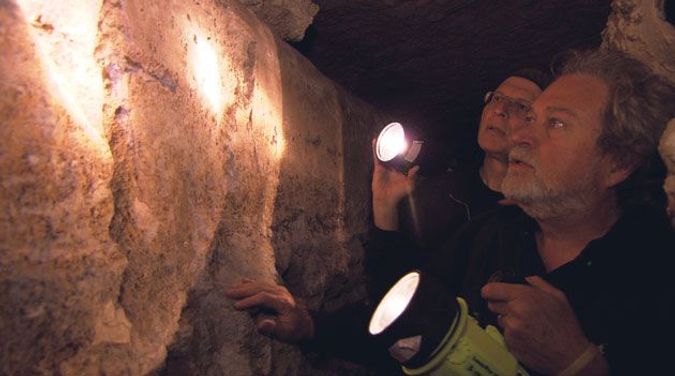 Getting Cross: Archaeologists examine a buried symbol at the so-called ?patio tomb? in Jerusalem, which some have called the earliest known Christian burial site. Image by associated producers, ltd

Some of you may have heard or read in recent days about the “Patio Tomb” in Jerusalem’s southern neighborhood of Talpiot, a Second-Temple-period cave, now situated beneath an apartment building, in which a team of archaeologists sponsored by the University of North Carolina claims to have found the earliest known Christian burial site — indeed, the earliest known archaeological evidence of Christianity.

The whole story — how the tomb, along with the nearby “Jesus Tomb” in which Jesus and his family are alleged by some to have been buried, was discovered in the course of construction work in 1981; how a near-violent clash ensued between inspectors of the Israel Antiquities Authority and ultra-Orthodox Jews, who insisted the tomb not be touched; how, after a brief inspection, it was then sealed and built on, and how it has now been explored by a robot-controlled camera inserted through a hole drilled in its concrete ceiling — could come from an Indiana Jones movie script. In fact, a movie there no doubt will be, since the robot was funded by the Discovery Channel working with Canadian-Jewish film maker Simcha Jacobovici, who has already made a controversial documentary about the Jesus Tomb.

The evidence for the Christian nature of the Patio Tomb has both a pictorial and a linguistic side. The picture is on an ossuary (a small stone coffin in which bones were deposited after the deceased’s flesh decomposed in the earth) photographed in the tomb, with a carved drawing of a large fish from whose mouth the figure of a man is emerging — clearly, a depiction of the story of Jonah, which early Christians read as a foreshadowing of Jesus’ resurrection.

The language is on another ossuary, which bears four Greek words, all in capital letters, as was the practice in ancient Greek inscriptions. (The graceful flow of Greek lower-case script was not something a stone carver could easily reproduce.) The first three of these words are, according to North Carolina religious studies professor James D. Tabor, who has posted a preliminary report on the Patio Tomb on the Internet, ΔΙΟΣ ΙΑΙΟ ΥΨΩ, or in Latin characters, dios iaio upso. (The “u” of upso, the Greek letter upsilon, is pronounced like the “u” in French tu or German ü.) The fourth word, photographed from a difficult angle, is unclear. It might be, Tabor writes, either ΑΓΒ (alpha-gamma-beta), ΑΓΙΩ (alpha-gamma-iota-omega), ΑΠΟ (alpha-pi-omicron) or ΑΠΒ (alpha-pi-beta), none of which makes immediate sense in the context.

The first word is the easiest to decode, because it means “Godlike” or “Almighty.” The second is not Greek at all, and Tabor, basing himself on other Greek inscriptions that have been found around the Mediterranean, takes it to be the Greek form of the Tetragrammaton, the sacred four-letter, biblical name of God represented by the Hebrew letters yod-heh-vav-heh. The third word appears to be a form of the Greek verb ΰψοω or hupso-o, meaning “to raise up.” It occurs several times in the New Testament to denote Jesus’ resurrection, as in the verse in the Book of Acts, “And God raised [hupsosen] him [Jesus] to His right side.”

The fourth word is unclear. Tabor speculates that it might be apo, “from,” and so an abbreviation of “from the dead”; or agio, “to the holy,” short for “to the holy place” (that is, “to heaven”); or the biblical Hebrew name Hagav, which as Greek Agabos is the name of an early Jerusalem Christian mentioned in Acts, or as a Greek transliteration of the Hebrew imperative verbal form hagbah, “Raise up!” This would leave us with the alternatives of reading the entire inscription to mean something like, “I, almighty YHVH, raise from the dead,” or “I, almighty YHVH, raise up to heaven,” or, “Almighty YHVH, raise up Agabos! [the name of the man buried in the ossuary],” or, “Almighty YHVH, raise up, raise up!” In all these cases, Tabor argues, we are looking at an invocation of the resurrection of the deceased, one never before found on any Jewish ossuary, and in conjunction with the “Jonah drawing,” a likely indication of the Christian faith of the buried man and his next of kin, who may have been contemporaries of Jesus.

One would have to know ancient Greek well and be a scholar of the period to appraise Tabor’s argument properly. In its favor, certainly, are both the Jonah drawing and the proximity of the Patio Tomb to the Jesus Tomb at an easy walking distance from the walled city of Jerusalem. Yet it is hard to accept any of Tabor’s readings of the fourth Greek word, and beyond that, it is not clear why early Christians in Jerusalem would have inscribed their ossuaries in Greek, which was the language of the upper and merchant classes, rather than in Hebrew, the language of Jewish prayer, or in Aramaic, the spoken language of most Jews and the one spoken by Jesus himself. Although Greek was known by many Palestinian Jews in Jesus’ time, it was not the language of Jewish ritual or ceremony, and the Christianity of the years following Jesus’ death was still ritually Jewish. The mystery of the Patio Tomb has yet to be resolved.

Deciphering Secrets of the ‘Patio Tomb’