Arikha’s Art of Rigor and Confrontation 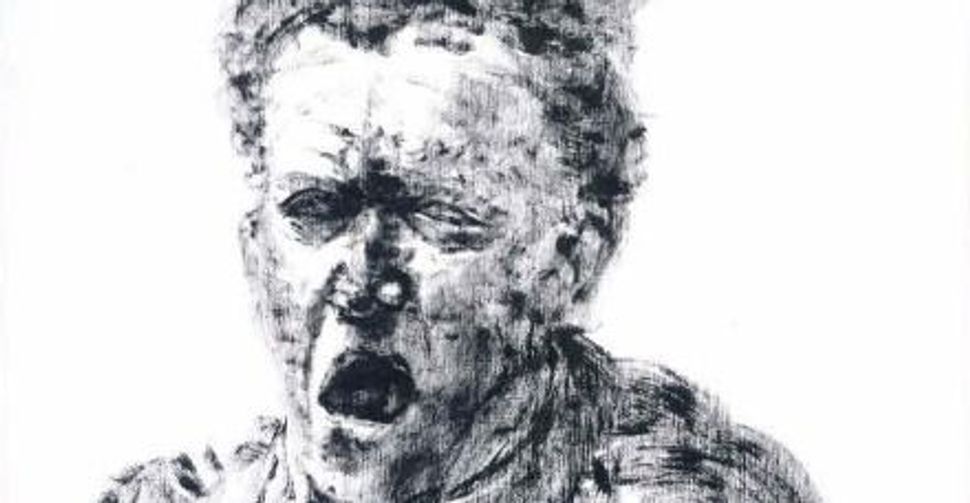 Image by ‘self portrait.’ courtesy of trustees of the british museum 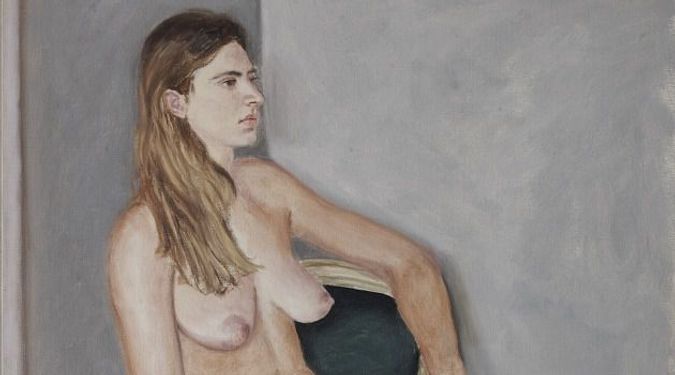 Real Curves: Avigdor Arikha?s portraits were all done in one sitting. But realistic depiction of the subject wasn?t his purpose. Image by 'cosima' (1992). © The Estate of Avigdor Arikha, courtesy Marlborough Gallery

Avigdor Arikha’s first New York exhibition since 2007 is an unflinching record of how he apprehended the world. Since his breakthrough 1973 conversion from abstraction to “post-abstract representational painting,” Arikha’s paintings, drawings and prints of friends, family, himself and familiar locations, were done, without exception, during one daylight sitting. Looking at Arikha’s impressive and complex body of work in this first mini-retrospective in the United States since the artist’s death in 2010, it’s important to ask why realism fails to frame Arikha’s art. Why was Arikha uncomfortable using biography to clarify his work? When asked where he was from, Arikha generally responded, “I don’t have a country.” Or, “Why should anyone want to know about me?”

I met with Arikha’s wife, poet Anne Atik, in New York, along with their two daughters, Noga Arikha and Alba Arikha. What’s temporary and what’s permanent is the subject of Arikha’s art and Alba Arikha’s new memoir “Major/Minor” (Quartet Books, 2011). As Noga Arikha put it, “It was supposed to be temporary in Paris.” Turning to her sister, she explained: “You know that. We were supposed to go one day to Israel. This got transmitted to me big time… that wherever you are isn’t where you will be permanently.” This battle between transience and homeland is, of course, a Jewish story, and it certainly had a direct impact on the artist’s family. 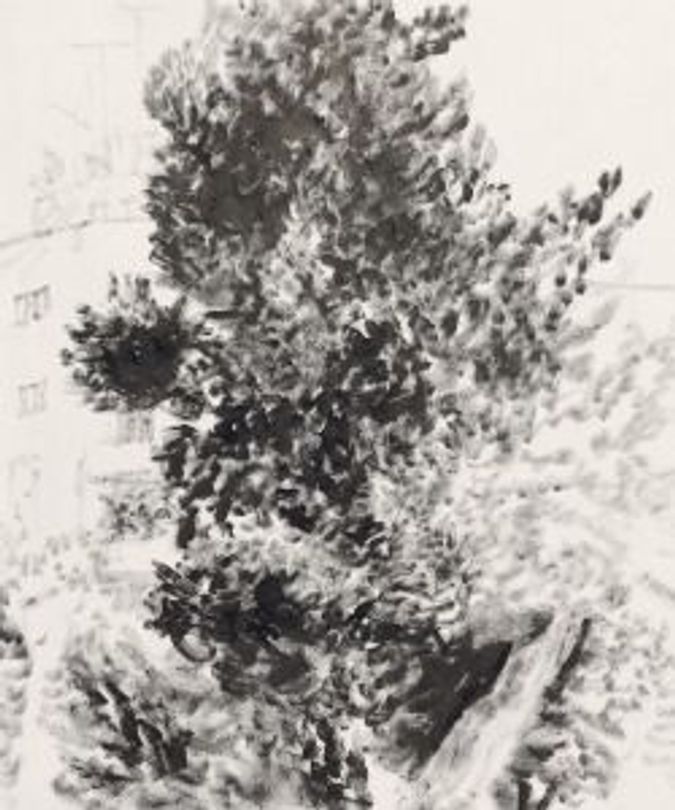 Determined The richly built density of the marks often belies their hesitant but determined touch in this Sumi ink drawing. Image by 'tree in port royal.' © The Estate of Avigdor Arikha, courtesy Marlborough Gallery

Arikha was deported, along with his family, to a Romanian concentration camp, later to be rescued by the International Committee of the Red Cross and sent with his sister, in May 1944, to Palestine. Though the artist eventually settled in Paris, he spent stretches of time in Israel, where his mother and sister lived, as well as in Europe and America. These places, however, never represented permanence for Arikha. This push/pull between countries informs Arikha’s art at a fundamental level. Paradoxically, on a personal level, as Noga Arikha noted, “we ended up being the most sedentary family in the world as a result.” For his art, this state of flux and anxiety exists as a tool of visual perception, driving the artist to an extreme present tense and turning his art into a state of high-wire visual tension. When it works best, the viewer cannot look away.

Arikha’s ability to direct his vision to the present isn’t simply a result of craft; it’s about a decision to work — perhaps, as his close friend Samuel Beckett worked — without allegory or metaphor. The result is art that’s rigorous and confrontational. Alba Arikha: “Beckett had immediacy and my father had immediacy.” With immediacy comes the threat of failure or error; both are unacceptable to Arikha. His successes were significant enough to place his art in major international collections from the British Museum, in London, and the Centre Georges Pompidou, in Paris, to The Israel Museum, Jerusalem; New York City’s Metropolitan Museum of Art; London’s Tate Gallery, and the Musée du Louvre, in Paris. His knowledge of form and perception was a lifetime achievement.

Some of these accomplishments can be seen in extreme close-up Sumi ink drawings, like the powerfully haunting “Tree in Port Royal, 2000,” “Garden, 1972,” “Vegetation, Jerusalem, 1996” or the more whimsical “Pablo Casal’s Suitcase, 2007.” The richly built density of the marks often belies their hesitant but determined touch. The marks wander about paper or canvas, creating a dense, scratchy surface. As Arikha moves between foreground and background, he causes a subtle tension to arise between a remote past and a difficult present. There’s little that’s frivolous about Arikha’s art. While the Sumi ink drawings are undisputedly visceral, some works in the exhibition feel gratuitous or inert, like many of the pastel nudes or “Pencil Sharpener, 2000.”

A pivotal work, though not in this show, is “Self-portrait Shouting One Morning, 1969,” and it’s the key to one of the most striking, though enigmatic portraits on display, “Self-portrait With Open Mouth, Head to the Left, 2001.” Arikha did at least six shouting or open-mouth paintings, drawings or prints. These works appear biographical, but they are not. In “Major/Minor,” several shouting scenes reveal family tension. Alba Arikha writes: “We often hear him shout in his sleep. Nazi flashbacks, as my mother explains.”

Arikha’s shouting self-portraits are deeply connected to the history of art, and in particular to a 1794 self-portrait by Jacques-Louis David. Though Arikha’s contemporary, Francis Bacon, painted screaming popes, Bacon’s scream is animated whereas Arikha’s scream connects perceptually to David’s painting of himself with a stroke while imprisoned in Paris during the French Revolution. Arikha wasn’t interested in David’s disfigurement per se, but in how he used the stroke to unsettle visual form: to merge a distorted side of a face with a normal side while presenting both in unison. Arikha’s shouting self-portraits are disquieting in their fusion of tragedy, comedy and power.

Alba Arikha’s prose is, like her father’s art, compressed, intrepid and acute. At times, “Major/Minor” feels like a feature film (the work’s been optioned), flitting from family visits in Israel to cool parties in Paris, where the young Alba magically transitions from conventional French girl to fantasy supermodel. She captures the pressures and anxieties of her father’s life and art, as well as her own and her family’s. This isn’t mere storytelling. In “Major/Minor” she compares her family to a friend’s: “They swim, they ride, they ski, they drive. My family does none of the above… we stick to what we know. And what we know is without a car.” The terseness of her lines sounds like debate or gunfire. It’s not metaphoric, it’s “live.”

This shared familial sense of the inexorable present infiltrated the work of both father and daughter. It’s not that biography had no role in Arikha’s life, but to use it to explain his visual structure is to miss how he perceived the world. Arikha had a philosopher’s vision as well as that of a director. Relying on biography or allegory would have distracted the viewer from the business of seeing. Arikha wasn’t merely creating pictures realistically; he was transcribing uncertainty as he saw it unfold.

When asked, Arikha talked about his life to his friends, critics and family, albeit hesitantly. “Major/Minor” testifies to his daughter’s tenacious pursuit of her father’s life. He grew up in Czernowitz, the principal city of Bukovina, a territory in the old Austrian Empire that later fell under Ukrainian and Romanian control — until he was deported to Romanian-run concentration camps with his parents and sister. He recalls how his father, an accountant, pushed his family down a ravine to temporary safety during a sub-zero forced march, before dying from a brutal beating.

Arikha’s first drawings from observation depicted death. These drawings, as is well documented, guaranteed his and his sister’s eventual rescue when they were shown to the Red Cross. Soon after settling in Kibbutz Ma’aleh HaHamisha, Arikha served in the Haganah (the Jewish Defense Force) from 1944 to 1948, when, during the War of Independence, the artist was badly wounded. His sister, a nurse, convinced the doctors to perform an emergency operation that saved Arikha’s life. He studied art in Jerusalem, at Bezalel School of Arts and Crafts (now known as Bezalel Academy of Arts And Design), and after the war he won a fellowship to Paris.

Arikah’s last work, “Portrait of Noga Pregnant, 2010,” is full of adoration and lament. Atik suggested the reason for the blue nightgown: “The Virgin Mary was always painted in blue.” Noga Arikha interrupted: “It was the Annunciation. While he was painting he had the same energy in his hand and eye he always had. He died three weeks later.” Of Alberto Giacometti, Arikha once said that he “burned his life for his work.” Atik told me: “Arikha always knew when there was danger. He said the essential thing is to come to the danger point, then get out of it… you needed a danger.”

For Arikha, these dangers were not symbolic. One time in the camps, when he was 12, he had just returned from a daring escapade to bind his drawings, when a guard seized the book, saying: “Child, you’re playing with fire!” The guard tore out drawings that documented atrocities. Did this prompt Arikha to eliminate the middle ground in his life or art? We cannot know. What we see in his work, especially his self-portraits and landscapes, is the deletion of allegory in favor of a volatile immediacy where the first and last stages of an image battle to stay alive in the extreme present.

Cheryl Kaplan is an artist, filmmaker and writer who has written for Art in America, Bomb, ARTnews and Flash Art.

“Avigdor Arikha, Works From the Estate” is on display at the Marlborough Gallery, in New York, until April 21.

Arikha’s Art of Rigor and Confrontation