The Very First Jew for Jesus 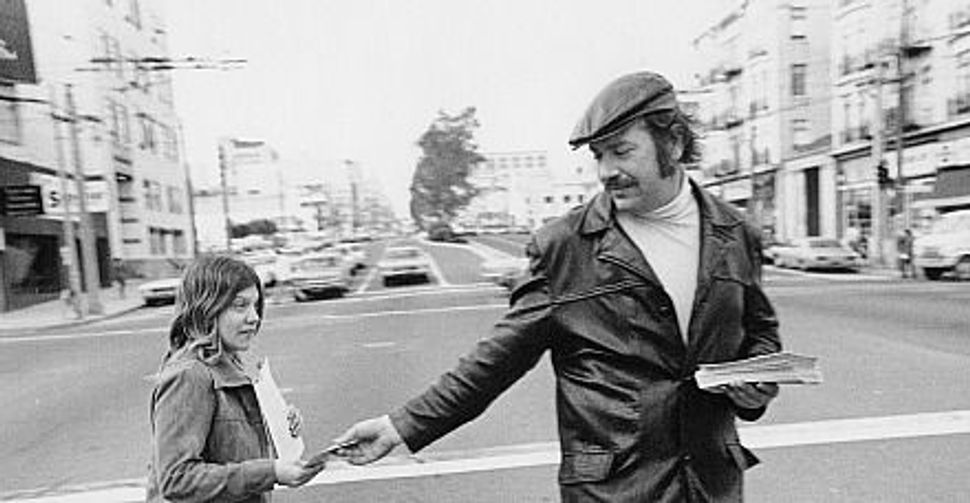 Image by courtesy of jews for jesus 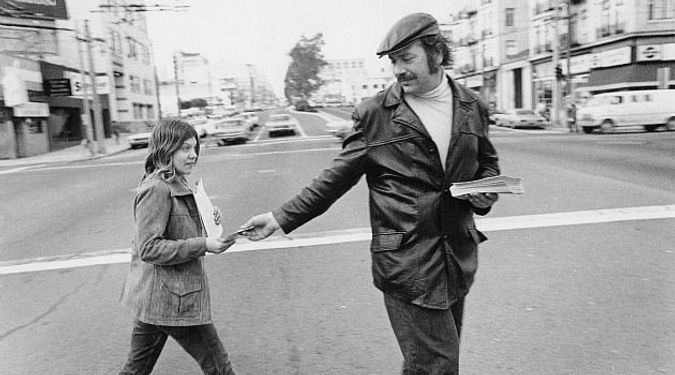 Selling Faith: Moishe Rosen hands a pamphlet to a student on a Berkeley, Calif., street in the early 1970s. Image by courtesy of jews for jesus

Called to Controversy: The Unlikely Story of Moishe Rosen and the Founding of Jews for Jesus
By Ruth Rosen
Thomas Nelson, 320 Pages, $22.99

Before he founded Jews for Jesus, Moishe (at the time, Martin) Rosen took business classes and sold fishing rods. Taking employment at a sporting goods store rather than at his father’s junkyard was Rosen’s first rejection of his ancestral legacy, his first apostasy. But his sales career — later he also sold cameras and cemetery plots — foreshadowed something beyond a simple conversion to Christianity. According to a new biography by his daughter, Ruth Rosen, the famous evangelist never really left sales. 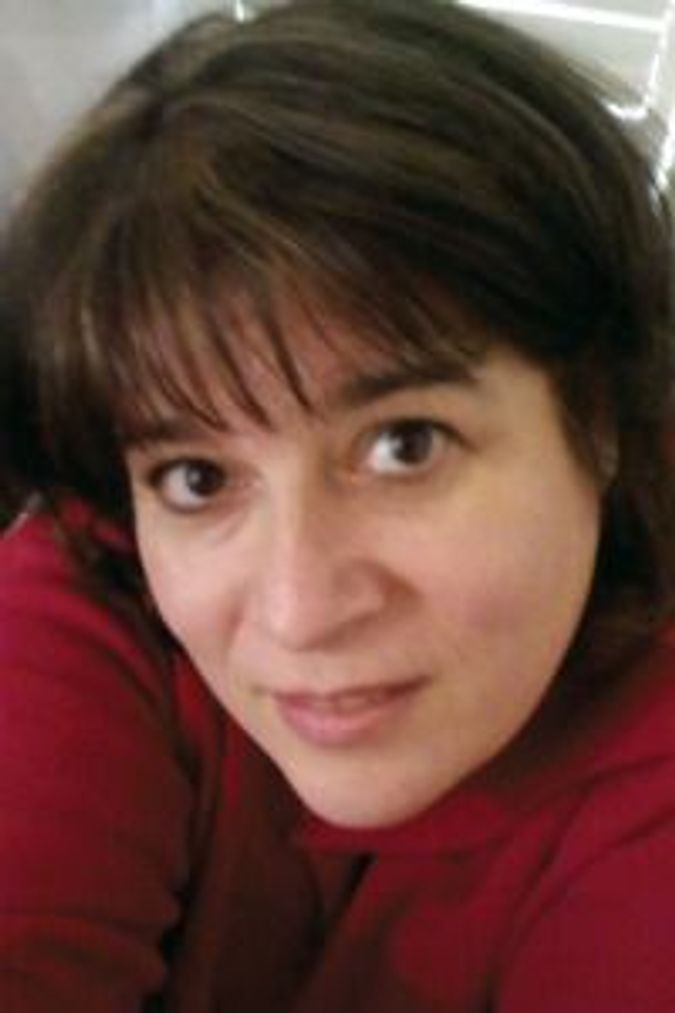 The business classes Rosen took at the Emily Griffith Opportunity School, a technical school in Denver, seem to have influenced his career as a “fisher of men” far more than his theological education at Northeastern Bible Institute did. Certainly, he was never much of a religious thinker. Rosen converted at age 21 after his young wife found Jesus, because he couldn’t convincingly refute the missionary pamphlets she brought home. His was a simple faith: Rosen saw every lucky turn as a gift from God. God gave him used winter coats, a $5 refund check, a tip-off about tire trouble and complimentary obstetric care for his wife. But Rosen didn’t talk much about the reverse problem: undeserved suffering. And he shrugged off biblical criticism as easily as he did theodicy. Liberal ideas, he explained, just “didn’t speak to me.” Richard Harvey, a Jews for Jesus missionary who became an academic theologian, is quoted as ruing the lack of a coherent “Moishe Rosen messianic Jewish theology.”

On the other hand, Rosen was constantly formulating and systematizing his business thinking, and “Called to Controversy” catalogs the results. He distinguished pedantically between principles (negative precepts) and procedures (best practices). He spoke at length on the principle of “If you don’t have it, don’t spend it.” Rosen stressed “standards, goals and accountability” at Jews for Jesus, and his daughter dwells lovingly on each step toward those lofty ideals.

As a result, “Called to Controversy” reads less like the life of a religious leader than like the biography of a businessman. Its central dramas and controversies concern power plays (Rosen sabotaged a boss by not reminding him to renew a building permit); sales technique (to demonstrate his organization’s determination to a local Jewish group, Rosen forcibly smacked a female employee), and management styles (Rosen shouted angrily at subordinates and frequently fired them). These tactics built a prosperous business: Starting from nothing in 1973, Jews for Jesus now employs more than 150 people and takes in about $20 million a year in donations.

Especially persuasive arguments did not drive Jews for Jesus’s success. Rosen took his key polemics from the American Board of Missions to the Jews, the proselytizing group at which he started his missionary career. Parallels between the Hebrew Bible and the New Testament, Rosen thought, should convince Jews to accept Jesus. When Jesus rode a donkey, the argument runs, he fulfilled a prophecy in Zachariah, and his virgin birth was predicted in Isaiah. But Rosen seems to have overlooked the logic that these congruencies prove only that the authors of the New Testament patterned their work after pre-existing Jewish Scripture. If literary allusions proved historicity, then we would know that “West Side Story” was true because it corresponds so closely to “Romeo and Juliet.” 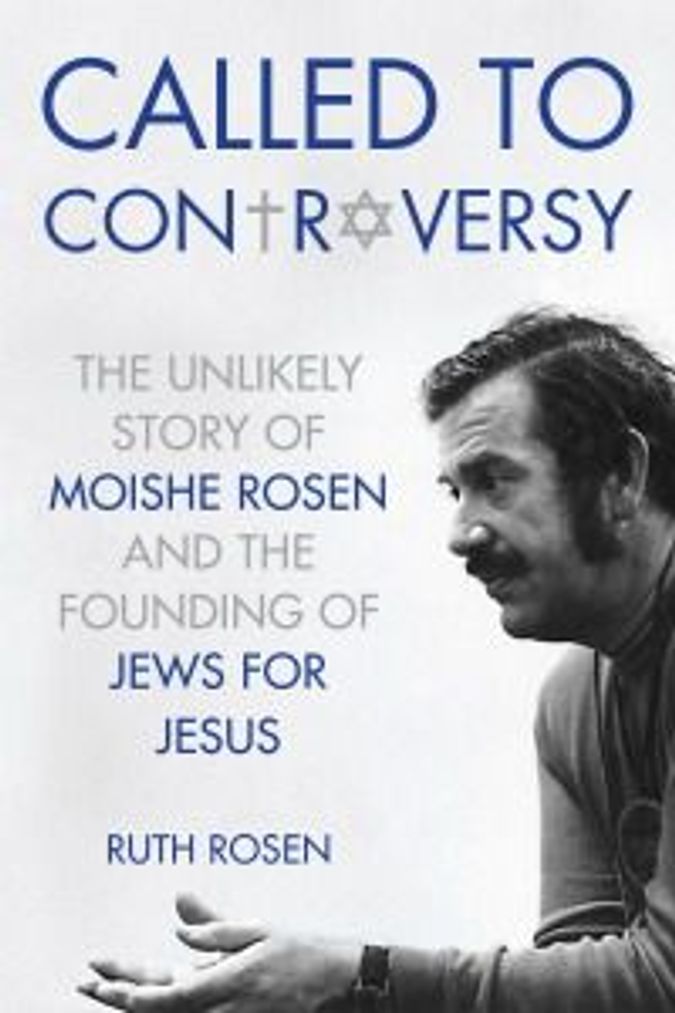 Rosen’s ideas were not innovative, but his tactics were. Working for ABMJ in New York, he was struck by the Jewish community’s indifference to Christian missionaries. In 1967, when a Jewish leader spoke to a group of missionaries (by Rosen’s invitation), he explained that Jewish organizations saw the threat of conversion as insignificant. Rosen began to think that ABMJ should focus on hippies, after a colleague pointed out that many of these spiritual seekers were Jews. He printed loopy, conversational pamphlets, the first of which began, “Hey you with the beard! / We think you are Beautiful. / God likes long hair and beards, too.” The pamphlets inaugurated a countercultural style, which came to include blue jeans and Jesus-emblazoned denim jackets, full-page advertisements in the Village Voice, and the recently defunct band The Liberated Wailing Wall, which mixed gospel vocals, a keyboard playing schlocky “Jewish” chords and a folk-hippy sensibility.

Rosen, who honed his tactics in San Francisco and Berkeley, Calif., amid the student protest movement, grew adept at getting attention for his group, whether through an article in Time magazine, an interview on network TV or a rally at Madison Square Garden. And Jews for Jesus easily provoked hostility from Jewish organizations, in part because it was the most obvious and brazen symbol of feared Jewish assimilation into a Christian society. The Anti-Defamation League regularly issued press releases about the organization’s latest “deceptive and offensive” ad campaigns, and since 1985, Jews for Judaism, a Jewish “counter-missionary” organization, has been disseminating its own simplistic pamphlets.

Jewish organizations needn’t have bothered. For all its media exploits, Jews for Jesus has not converted many Jews. “It is as easy to convert Jews as to convert the devil himself,” Martin Luther complained. This difficulty may be old news, but it is a sticky point in “Called to Controversy.” Although the book is devoted to a supposedly brilliant missionary, it is curiously mum on sales figures, saying only that Rosen “never doubted that a day would come when the trickle of Jewish believers in Jesus would become a flood.” The Jews for Jesus website estimates that there are 30,000 to 125,000 Jews for Jesus worldwide, but it doesn’t say how many of those people actually began life as Jews. In an e-mail to the Forward, Yaakov Ariel, a religious studies professor at the University of North Carolina who studies Christian evangelism to Jews, estimated yearly converts to Jews for Jesus in North America at a few hundred — but “this includes a high percentage of non-Jews.”

Jews for Jesus succeeds, nonetheless, because Rosen didn’t really sell Jesus to Jews; he sold Jewishness to Christians. American Christians love Jews; evangelicals support a cottage industry in biblical Hebrew and visit Israel in droves. The largest pro-Israel organization in the United States isn’t the American Israel Public Affairs Committee, but John Hagee’s Christians United for Israel. These philo-Semites are the natural audience for “Called to Controversy.” They’ll see the occasional Yiddish term as exotic rather than kitschy, and they’ll recognize the 1,000-word chapters (each and every one begins with a pithy anecdote and most end with a homily) as what they are: sermons. To someone who herself traffics in “good news,” the minutiae of Rosen’s life — his childhood hobbies, middle-aged struggles with weight, the intricacies of choosing a successor — are sacred history. To practically anyone else, they’re a bore.

Raphael Magarik is a graduate of Yale University and an editor at The Daily Beast blog Open Zion.

The Very First Jew for Jesus